Who Ya Gonna Call?

With OPEX week finally behind us we are now nearing an inflection point – a showdown of biblical proportions – a battle of the titans if you will – a struggle of one which will be the source of legends for generations to come. Life as you know it will never be the same.

What do you mean by ‘biblical’ you ask?

As is Old Testament, ladies and leeches, real wrath of God type stuff. Fire and brimstone coming down from the skies! Rivers and seas boiling! Forty years of darkness! Earthquakes, volcanoes… The dead rising from the grave! Human sacrifice, dogs and cats living together… mass hysteria!

OR…. we just get a little correction downward and then bust higher 😉 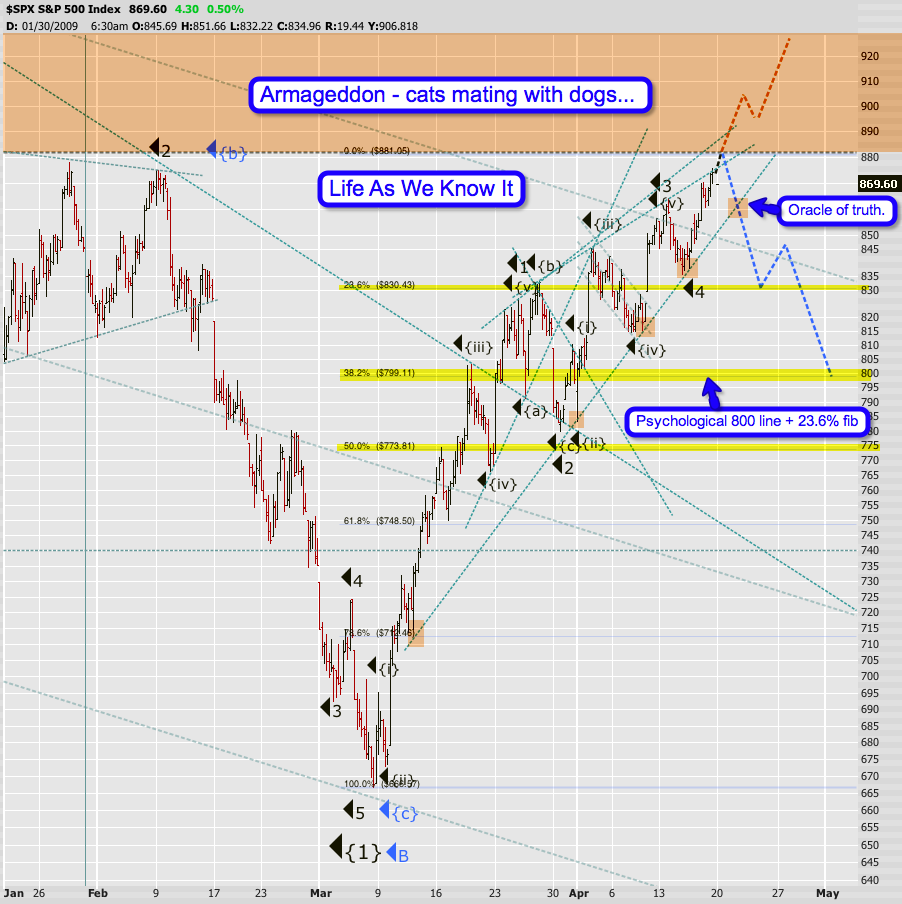 Seriously now – we’ve got a big tectonic dividing line and it’s right smack at 881 (ish) – it’s the San Andreas Fault of dividing lines and it’s where the bulls will separate from the bears. It’s also just so happens to be our intrepid 23.6% fib line of Primary {1} of Cycle wave c. It’s very very simple my dear rat minions – if we breach this line by more than a few points or so it’ll get ugly for the bears – if we stay underneath it by tomorrow’s close the bronze bull statue on Wall Street will get a swift kick into its shiny brass balls at the sound of the closing bell.

Orange: We are completing (W) of {2} somehow – assumption here is that we are busting higher to finish the first leg of a double or triple correction. An alternative scenario is that this is (A) of a flat correction, which will present us with a long (C) wave to the upside. What I do know is that we are not in the finishing stage of {2} – as stated before, this Primary corrective wave one will take us well towards to the end of summer.

Blue: That is currently my preferred count and also the easiest one – plus I have money riding on it right now, so I do put my cash where my big mouth is. We completed Minor 3 of Intermediate (A) of Primary {1} and are now due for a meaningful correction, which I might add is long overdue. The confirmation point will be when we drop below the 860 mark which would officially breach the uptrend diagonal (marked on the chart) which has confined this uptrend almost since its first spike to the upside.

Although my preferred count is Mr. Blue a continued bullish advance as hypothesized by Mr. Orange is not impossible – just for the record. However, having covered my ass appropriately here are some exhibits which I believe point downward, at least on a medium term basis:

First, NYSE breadth and momentum (as defined by the Zero) in the past week has been waning despite a continued price advance. That’s and the looming overhead resistance are my main clues. I already posted my second one last week: 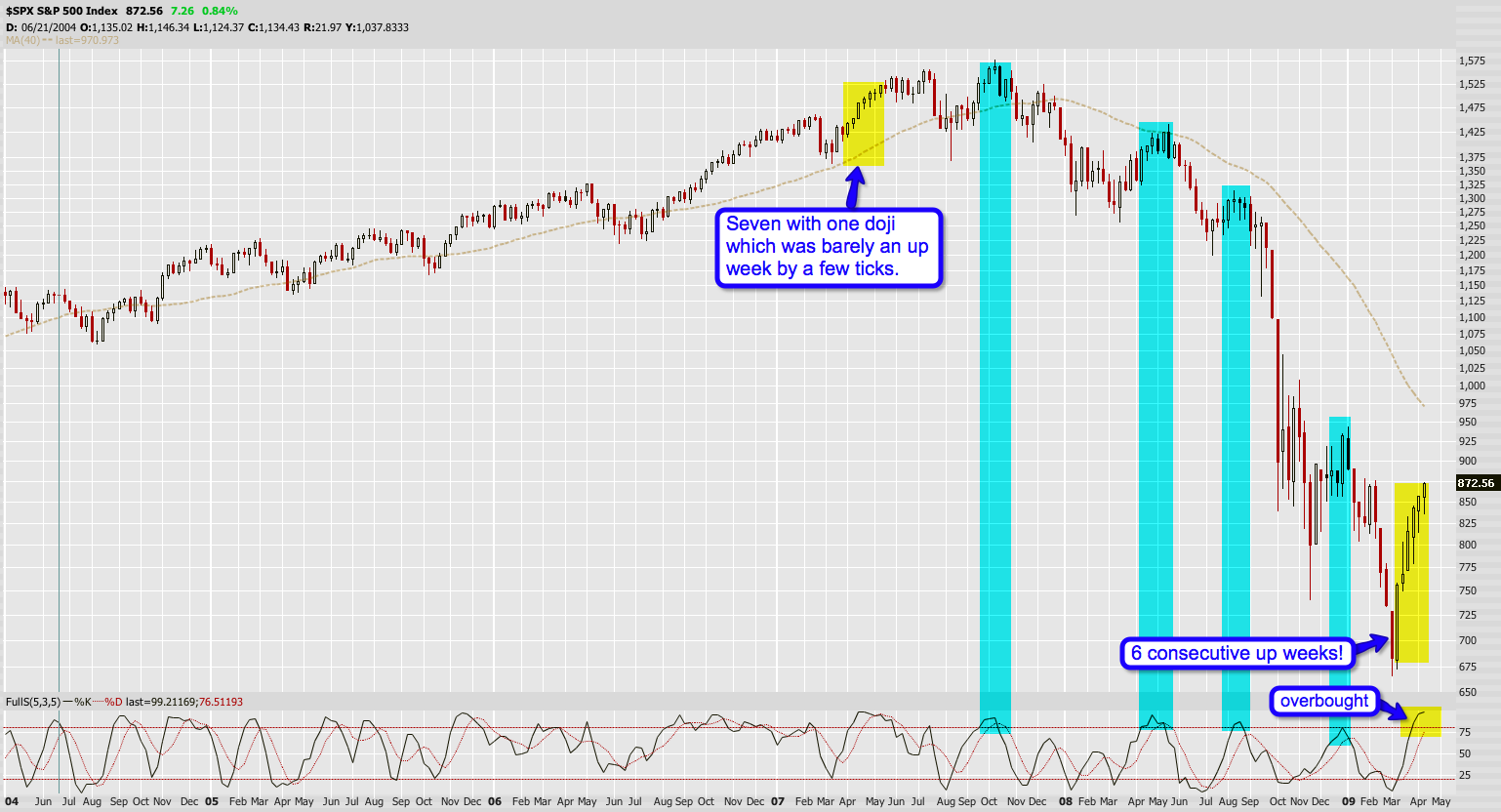 We just completed six consecutive weeks to the upside – seven is not impossible but would be the first time since the end of the ‘bull market’ (which actually was Cycle wave c of this bear market, but whatever). And I don’t even count the last one as a seven – I count it as a five since the sixth one was a doji which barely pushed into positive territory by a fraction of a point. Also on that chart is my intrepid weekly stochastic which indicates an extremely overbought condition at this point – we are talking a 98% reading here – boy is this thing overbought – did I mention it’s overbought?

This is of course a very long term indicator, so a few more days of bulltart exuberance is not impossible. But wait – I’ve got more: 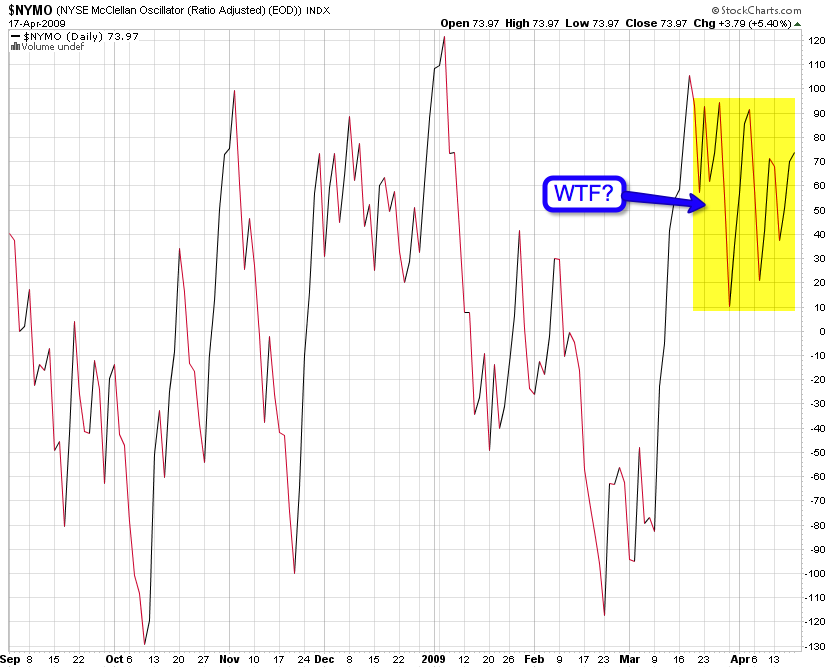 Well, actually this one is completely useless but I wanted to show it anyway – not sure what’s going on with the McClellan but it’s painting some weird triangle here. Moving on… 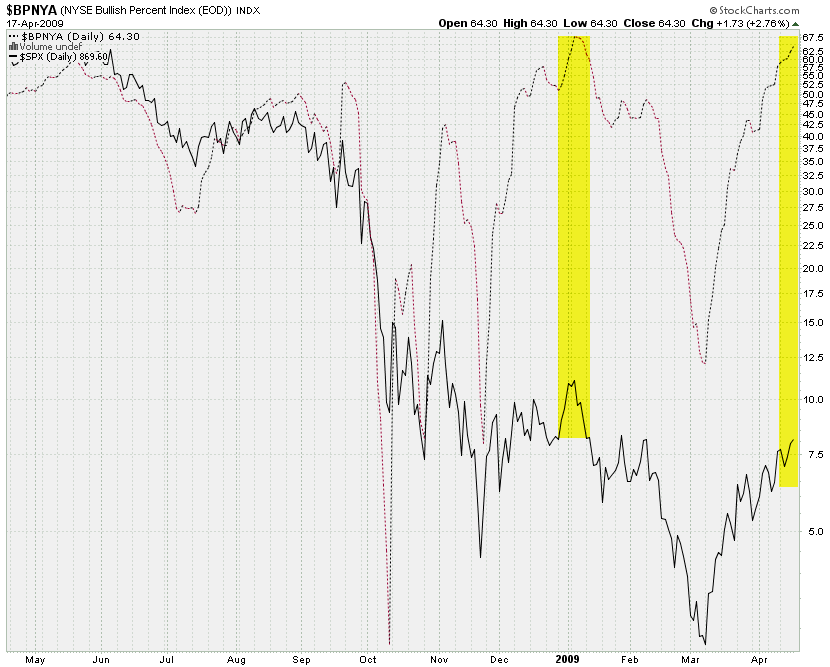 Aaahhh – now we’re talking – very overbought reading as well. I frankly don’t know how we can push much higher here but same CMA disclaimer I mentioned earlier – nothing is impossible in this freakin’ tape. 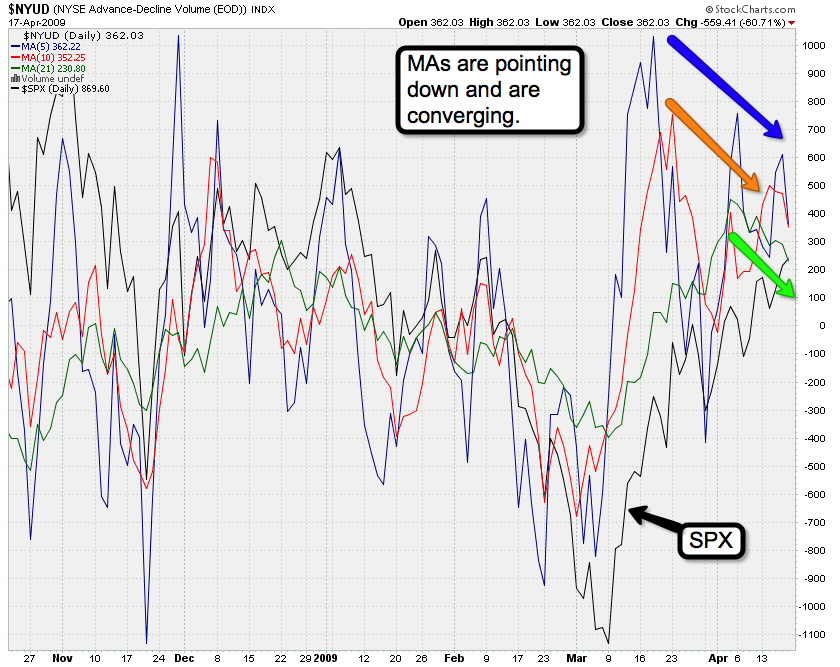 Okay, this is my favorite chart for today – I call it the ‘money shot’ 😉

Before you scream in terror and throw your monitor out of the window – relax – take a deep breadth – I know it’s ugly but we can do it: Look at the black line – it’s the SPX – we’re good so far. Now, on top of that I’ve dropped three moving averages (5/10/21) of the NYSE Advance-Decline Volume index. See – that wasn’t so hard!

Now what I’m seeing here are two things: One, all three seem to be converging and although I am unsure about the exact meaning of this it happened two months ago (remember?) which was followed by a drop into (5) of {1} all the way to our evil 666 mark. Second, they are all pointing down and have been declining for a while now – a pretty clear sign of waning momentum in this bear market rally. 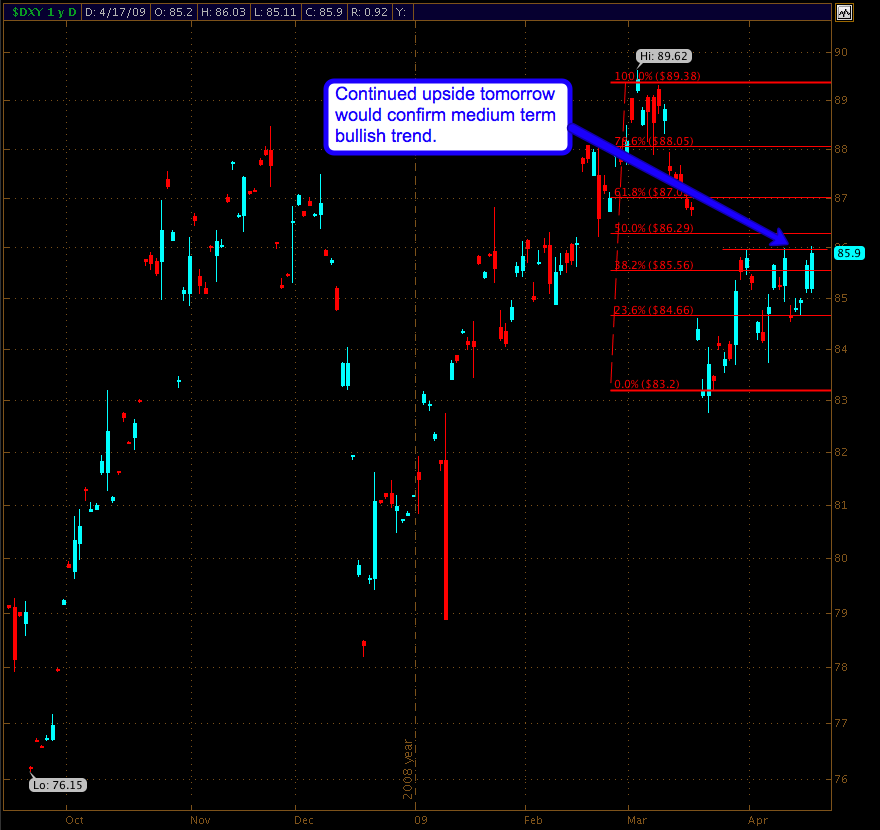 The Dollar needs to push higher tomorrow and probably by Tuesday at the latest. We have to eighty-six the – well – 86 line and that soon, as a push beyond that mark would confirm a medium term bullish trend. I’m not sure about the wave count yet. Either this is Minor 3 of Intermediate (3) or this is Minor B of Intermediate (2). Again, it’s cats living with dogs on Monday or if we push up higher life as we know it. 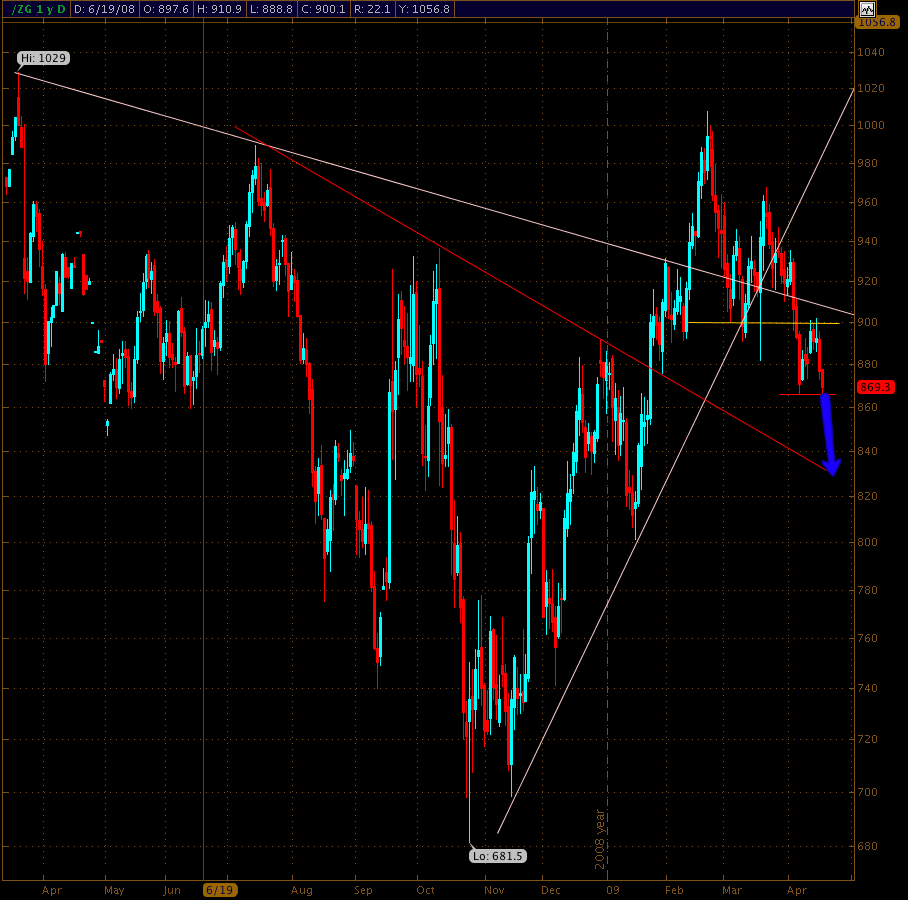 Which brings me to our favorite precious metal – Gold – it’s shiny and we like it. Well, it happened to breach through its prior 2009 low on Friday and then pulled back out – such a tease! But unless we’re dealing with the Armageddon scenario here I think we’ll drop lower and complete a nice clean 5th wave, ending our first leg down around 800 – 820. Remember that commodities like to extend their 5th waves, so we could potentially even drop lower. More longer term I expect us to touch the 650 mark later this year. If we bounce up and breach 900 we might be dealing with something completely different here – but thus far all engines seem to be go and ready to push us further down.

That’s all I have for you leeches – should keep you busy for a little while. Oh yeah, and unless you spent the last week at an Al-Qaeda training camp – evil.rat has been released – detailed announcement can be accessed by clicking on the image: 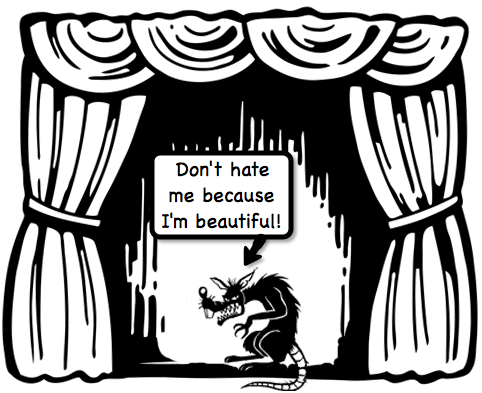