Automation Is A Double Edged Sword 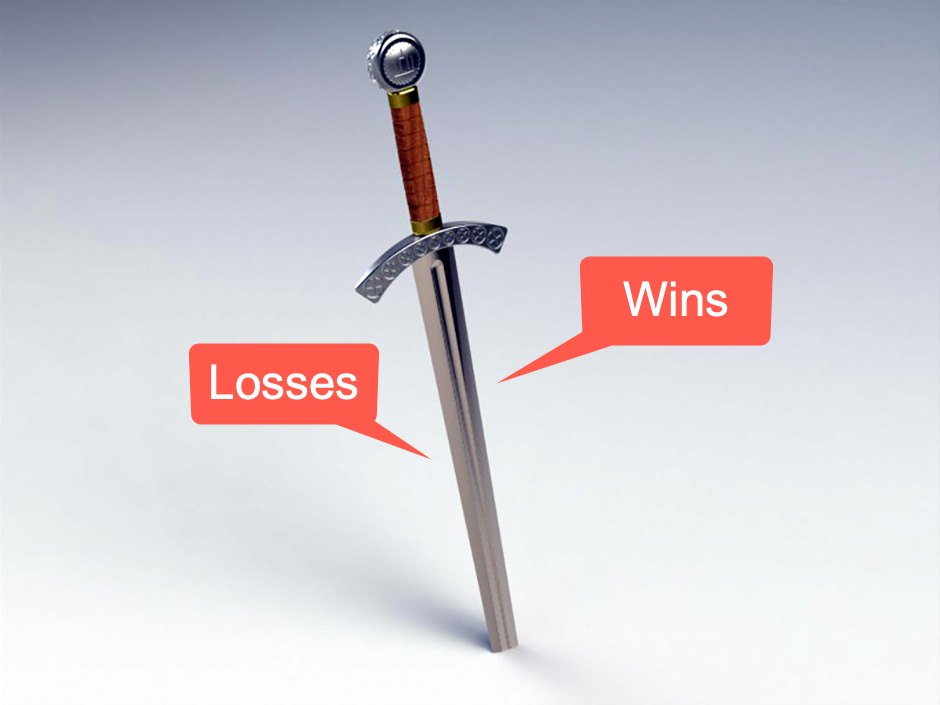 A lot of people begin their trading career as discretionary traders and in most cases fail at it ignominiously for a variety of reasons. It’s not uncommon to see them wipe out more than one trading account in a short amount of time.

Many give up for that reason, and usually it’s the ones who weren’t ever meant to be traders in the first place, or they came into the game with unrealistic illusions of achieving quick riches with minimal effort.

You know who you are.
Others seek salvation in automated or systematic trading, which on the surface promises to alleviate many of the shortcomings that led to their previous downfall.

Now an automated system is just that: It’s a comprehensive set of rules that (hopefully) are black and white and leave no room for subjective whims or discretion.

Removing the weakest link – i.e. the human element – also promises much increased efficiency, more convenience (bots can trade at night or on weekends), and more accuracy when it comes to placing and logging your trades.

What most fledgling traders don’t realize however is the deep rabbit hole on which they just embarked once they switch from discretionary to fully automated trading.

On the surface this sounds completely nonsensical. Isn’t the main purpose of an automated system that it doesn’t suffer from all that cognitive bias that human beings seem to be unable to leave at the door?

All that is true. But having been active on both sides of that equation I had to learn a few painful lessons after I crossed over the Rubicon of automated trading.

And that even though I already had many years of prior coding experience, which I assumed would give me a running head start.

What I learned over the course of many years is that you are simply exchanging one hairball of worries for another one. Let me explain.

First up, coding a full fledged trading system is HARD. I mean really HARD. It’s extremely challenging even for seasoned programmers for one main reason: Just like the code running the navigation systems in a NASA shuttle or a SpaceX Falcon it is mission critical.

If your flight controller goes whack during a launch then people will die. If your trading system goes crazy because [insert 1 of 1000 reasons] then your account goes belly up.

Every line of code needs to be carefully checked and rechecked for accuracy. Then it needs to be tested in demo trading mode for several weeks just to get the first few kinks out.

And believe me – there will always be kinks. I’ve been a coder since the late 1980s but never built a system that didn’t require a laundry list of fixes after launching it in test mode. Which means it will take quite a while until you will fully trust what it does.

If something goes wrong the first thing that comes to mind is some programming error. Which is fairly easily fixed, especially once you’ve built a system or two on a particular platform.

The more tricky issues to resolve are intermittent glitches that only come to light after running the system LIVE (for real money) for a few weeks.

A data feed may just stop after a day or two and may have to be reset. Very annoying believe me. Sometimes an order is being sent and rejected but actually was filled over on the exchange side. Ooops…

Or the spread on an exit may have been so wide that your stop order lost another R or two on top of the expected loss. Not something your backtest accounted for.

Perhaps your trading platform crashed overnight and you got stuck with a huge losing trade as your exchange is unable to cache a particular order type on their end. Exotic issues no one ever anticipates.

The devil as usual lurks in the details and this is but a small sample set of unexpected issues that have reared their ugly heads over the years and needed to be addressed, sometimes with time extensive hacks or work-arounds.

But let’s assume for a second that your automated system works flawlessly and it does exactly what you expected it to do. Perhaps you didn’t even build your own system and are just following some signal service offered by someone else.!

You run it for a few weeks and suddenly you get hit with a series of five or six losers. You check the executions and everything looks good, the system operates just as it was designed.

So what’s the problem?

A lot of people think that handing full control over to an automated system is liberating – and yes it can be. But to many the exercise turns into a perpetual emotional purgatory as they feel compelled to take action – to ‘do something’ – when the system isn’t performing as they hoped.

It’s all too easy to turn off a system during a losing streak. What’s not easy at all is realizing that you just lost out on a series of winners that would have made up for all of your losses and then some.

The reason why automated systems are difficult for many is because of one single reason: It does exactly what you’ve told it to do.

It doesn’t ever change its mind. It follows the rules to the tee. It doesn’t feel any frustrations when it loses and no euphoria when it wins.

It just ticks along without discretion and without any ifs and buts, during both good and bad market periods.

And some people just can’t take it. They feel compelled to take action – to do something.

That entry could have been better if the system would have done X or Y. Those moving averages had not crossed yet but it was a perfect entry. Very frustrating!

Many attempt to alleviate their emotional turmoil by ‘fixing’ issues which don’t really exist and by adding new rules where none are needed. It’s the system trader equivalent of mission creep.

What once started out as a simple and elegant trading system with a proven edge slowly metastasizes into a messy furball of biblical proportion.

Others simply start turning the system off and on when and if they see fit. Which in most cases ruins the entire system and we’re back to square one – discretionary trading.

As you can see, the rabbit hole of automated trading goes very deep and you’re probably not surprised when I tell you that I’ve only covered the tip of the iceberg.

So what is the best way to trade an automated system?

Simple: Put the horse in front of the cart first.

It’s not automation that leads to financial gains – it’s developing trust in your trading system.

Meaning: have a system first, THEN automate it.

The one and only way to properly trade an automated system is to first start trading it manually in live tape with real money.

Backtests are what the word implies – they are an idealized simulation based on a subset of historical data which attempt to replicate what would have happened in the past under perfect conditions.

They have little bearing on what happens in the future and as such the only way to establish the emotional baseline necessary to automate a system is to first trade it for at least 3 to 6 months.

And that means every single entry and exit without exception, based on black and white rules. If you do that and are able to produce consistent and repeatable results without taking any discretion THEN and only then should a system be automated.

Of course you’ll still have to deal with the arduous task of refining the system so that it addresses any hiccups that will arise, but you’ll know that it’ll be worth it in the end.

As you have probably gathered by now, automated trading is not for the faint of heart or low in patience. I’ve personally invested over 15 years of my life in systematic trading and am still learning things all the time. When I’m not busy fixing technical issues 😉

This is why I generally caution traders against picking up the mantle of automated trading. It takes an almost unicorn level of skills to be successful plus it’s a very time and resource intensive process.

Is it worth it in the end? You betcha!!

But unless you’re a nerdy masochist like yours truly a much easier path to success is to simply adopt someone else’s trading system, assuming of course it’s got a good long term track record.

Just be aware that following a signal service for example does not free you from managing your own emotions and expectations.

Cherry picking signals is a common practice I keep seeing among my own subscribers. Basically you are saying that you somehow ‘know better’ than the system you bought into.

Which of course makes no sense whatsoever. System trading is like getting pregnant – there is no in-between. Either you are trading a system as it was designed or you are trading something completely different.

Before you run: the new year is here and it’s time to put yourself on the fast track to building your own trading business.

With RPQ Unlimited, you’ll receive all the trading education you will ever need to be a successful trader.

We believe it is crucial to immediately start growing your trading account just like a professional: slowly and consistently.

Which is why we’ll be spoon feeding you live quant trades that you’ll place alongside us. Trades from proven market specific strategies, with a proven track record that institutional firms keep under lock and key.

A LIVE cumulative P&L with all trades over the past year can be found here.