Last night I followed my own advice and took out some lottery ticket longs near 1335. Put a stop below 1330 and then went to bed fully expecting to be stopped out overnight. You can imagine my delight when I woke up to what amounts to nothing less than the reversal from hell this morning (I live in CA):

Nice!! Now I want to make something very clear – especially if you’re new around these parts. I had NO idea that the tape would turn last night – things looked pretty fragile and I would have not been surprised to see us scraping 1320 or lower this morning. What I DID know however was the fact that we were sitting on three consecutive Net-Line Sell Levels (NLSL), which gave me/us an opportunity to get positioned. This is not the first time Net-Lines are being observed and provide us with much needed clarity in times of volatility. If you were a vampire with a Gold subscription last night then you might just be nicely in the green today – or you will be once you rise from your crypt. 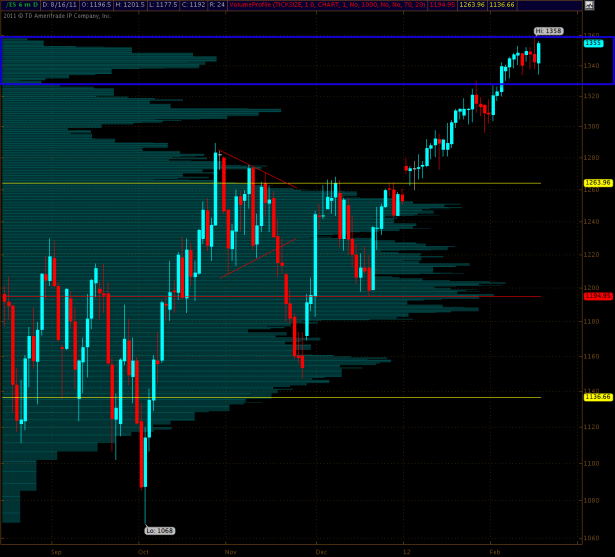 Of course this changes nothing. The way things are playing out we could be back at 1330 or 1370 tomorrow – who knows. As long as we are locked inside this volume box we are not going anywhere fast. One chart however has me puzzled as it runs contrary to what one would expect given the tape of the past two weeks: 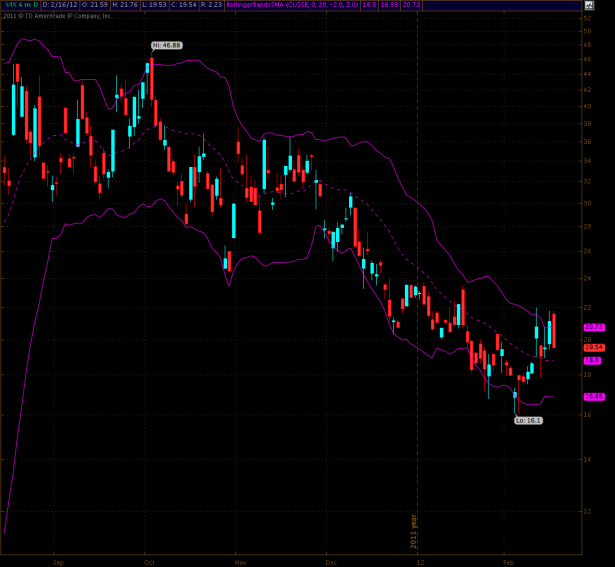 Okay, given the fact that we were trading not lower than 1335 in the past week, can someone explain to me how in the world we are two steps into a bonafide VIX buy signal (relative to equities)? That’s right – we closed outside yesterday and we are most likely going to close inside today. If we get one more close below tomorrow (which would probably mean we’ll push to new highs) then ware pushing toward 1370 and maybe beyond. 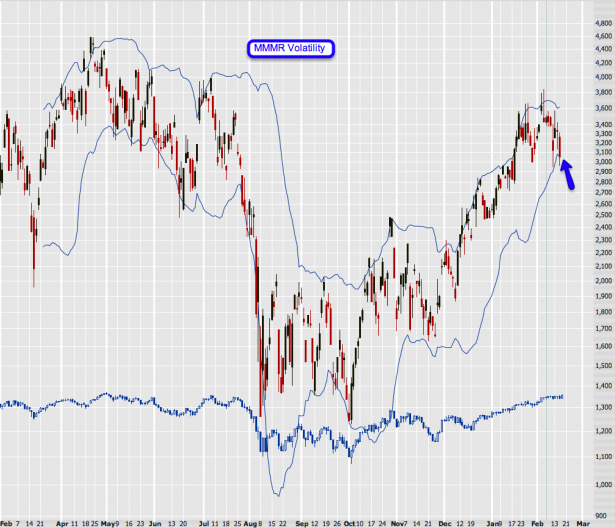 My MMMR Volatility model is looking bullish – would you believe it? The odds of a drop after having pushed outside the lower BB are rather mild at this point. Medium to long term I may however point out that the BB is in the process of rolling over and what happens in the next week or so will determine whether we are dealing with a rising or falling resistance/support range. Maybe this is part of a longer term topping pattern but it’s way too early to jump to premature conclusions. 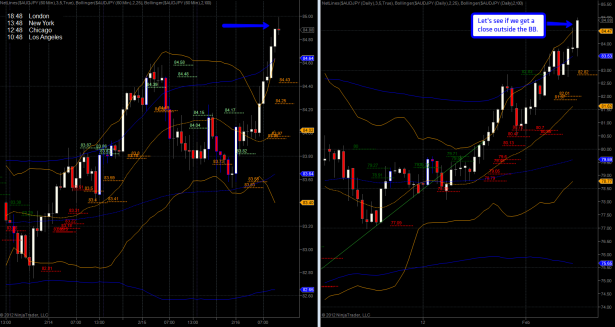 The AUD/JPY however has been gunning higher as suggested a few weeks ago. A close today outside that BB may give us a few days of softness however. If equities follow suit then we may be denied that VIX Buy signal and things would continue to be messy for a little longer.

Update 2:50pm EST: I just ran into a few commodities setup worth sharing: 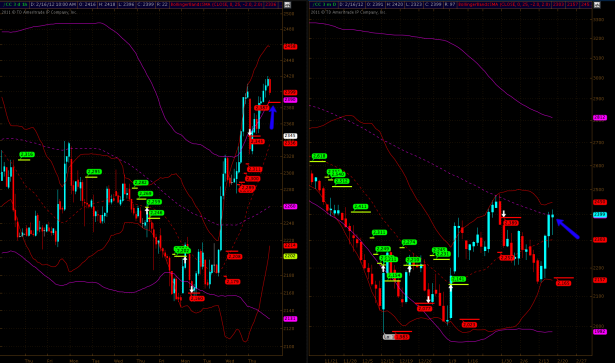 Cocoa is at it again and worth a long shot if it can push above its 100-day SMA. Easy setup as you can keep your stop just a few handles below that SMA and be done with it. Either it’ll pop or it won’t – simple. 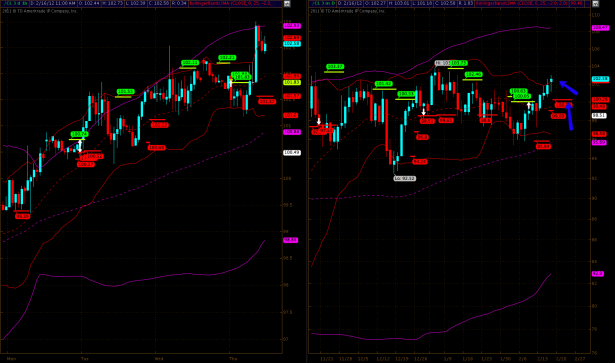 Crude has pushed above its 25-day 2.0 BB and may just be pushing toward 108. I’m long here with a stop near today’s lows. 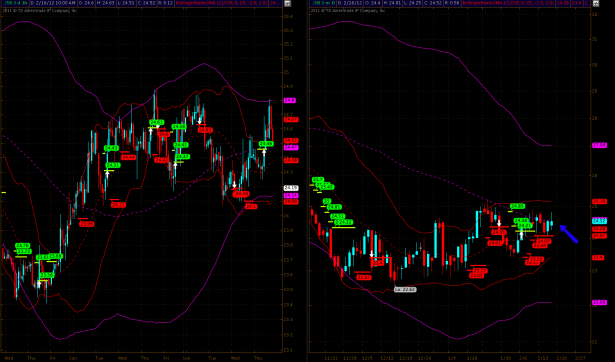 Sugar looks like a mess right now – I know. But it’s been testing that 100-day SMA for a long time and if it manages to pop higher I think it could run. Odds are 50/50 but I am not interested in a short trade as there’s too much support looming below. 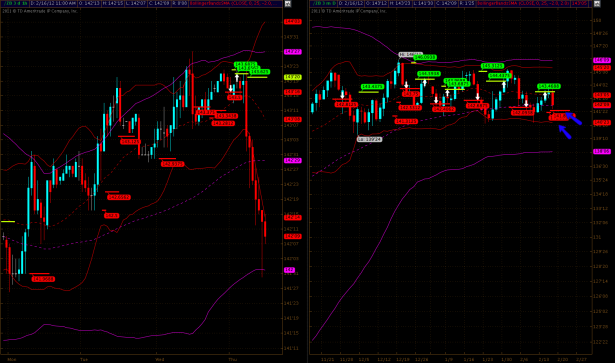 30-year treasuries are once again back to ‘whence we came’ – a recurring theme these days. And my setup here would be identical to last time – be long until we breach through that NLSL near 141’22. Will that EVER happen? IF it does I suggest you take out a lottery ticket ride to the downside. 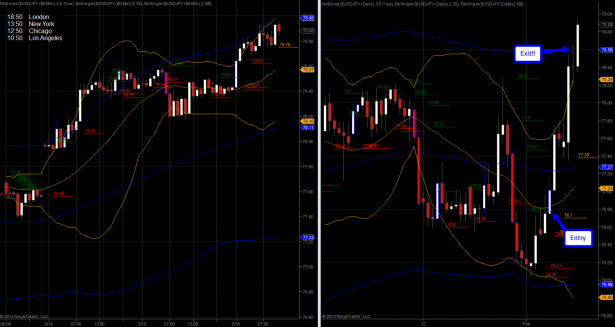 And I would be amiss to let this opportunity of shameless self promotion slide by me. If you are a sub then you surely remember that USD/JPY entry near 76.72 a bit over a week ago. And boy oh boy has this thing run ever since. Another great example of how those Net-Lines offer us an edge in markets that continue to confuse almost everyone else. By the way – if you have not already (which is doubtful) then I strongly suggest you cash out and head for the exits now.