Quick update post session. Judging by today’s tape it seems like we are going to see continuation higher as suggested earlier this morning. For starters we have all the signs of a low volatility/participation melt up. 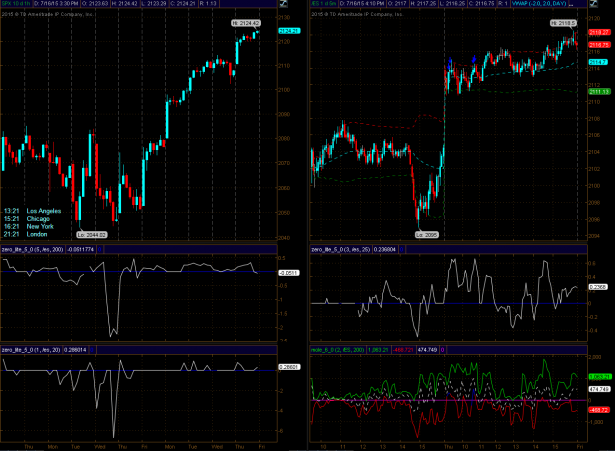 The signal range on the Zero continues to be minimal which is typical for a systematic short squeeze – we’ve seen this script over and over again in the past few years. The Grexit scam was a convenient backdrop to once again lure any remaining hobby bears into a rope-a-dope near the lows. 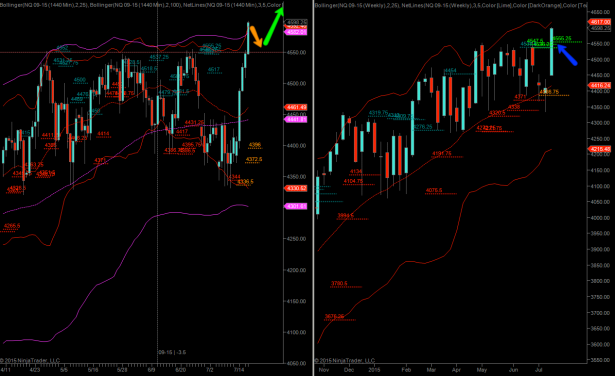 Our coal mine canary (a.k.a. the NQ futures) continue to whistle Darth Vader’s theme song while shorts are systematically being slaughtered on the way up. I actually have some footage:

I think he needs a bit more practice. Anyway, as you can see the daily panel has us pushing outside the upper 100-day Bollinger which suggests that we should expect an obligatory correction soon, especially after eight consecutive white candles. The most plausible scenario in the coming days is a drop into 4550 followed by a run higher.

What About The Bearish Talk?

Don’t make the mistake of interpreting the current price action as evidence that the old bull market is back in full force. Yes we are pushing higher but this market is highly volatile and will remain to be so – and that can swing both ways at the slightest headline or rumor slip. We should continue to limit our exposure in equities to short term positions and play them with small position sizes. If you want to grab a few longs on a retest be my guest but I caution you from placing large bets in either direction at this point. Of course it’s business as usual on the Forex and futures front.

Favorite Quote Of The Day:

“Efforts to further increase transparency, no matter how well intentioned, must avoid unintended consequences that could undermine the Federal Reserve’s ability to make policy in the long-run best interest of American families and businesses”. — Federal Reserve Chairwoman Janet Yellen