After some initial trepidations the Mole has turned himself into a mean lean crypto webinar producing machine. Which really cracks me up because I almost soiled myself the day of the first one and now I can’t wait for the ‘big one’ which is scheduled for the coming Wednesday at 3:00pm Eastern.

Yes, you heard that right – I had to make another change to the calendar as there simply is too much to do ahead of the big launch. Exhaustion levels are pushing in the red zone.

If you weren’t able to attend the Sunday show – boy, did you miss out. There was quite a rowdy crew that gathered and and we had a lot of fun. Plus everyone was eager to finally get their greedy mittens on some of the ‘now not so secret sauce’ that drives the crypto trading system which made me and Scott more than a million dollars starting from just $70,000.

Anyway, enjoy the replay but make sure to set aside some time for the coming Wednesday at 3:00pm Eastern.

Here’s the Zoom link (no, I didn’t screw it up this time – sorry guys).

Full Disclosure Of Our Awesomeness

As we get close to the final webinar in our Crypto Trading series and the launch of the automated version of the system (yeah, yeah, we all knew it was coming) I think it’s important to be transparent about the changes we’ve made along the way.

Last year Scott started out with a very simple version of the system, not too optimized and not too fancy. He’s really good at that but I’m even better at taking promising concepts to the next level.

And I for sure didn’t want to produce some curve-fitted monstrosity which looked good on paper and didn’t perform in the real world.

Yes, we all know it’s worked amazingly well, and made us more than a million dollars (way more now) starting from just $70,000.

Although I must admit, daily equity swings more than 100K up and down are sucking some of the fun out of it now. C’est la vie en crypto.

A lot of that is just the market going bananas though, we have to be sure that it isn’t just luck (spoiler alert, its not just luck). And everyone who attended last Sunday probably agrees at this point.

The Differences Between The Two Versions

There is also a little bit of complicated logic about the “switch off go to cash” thresholds and I included some backup plans and redundancy… after all that’s the key part of the whole plan.

And that’s our secret sauce, sorry we’re keeping that to ourselves and our paying customers.

Anyway… excluding the last week (which was amazing, ludicrous, incredible, obviously) the results are pretty similar.

The final version squeezes another 30% profits over the beta, which is good, but it also tells me that we started out with something pretty close to right.

If it was hundreds of percent better, I’d be concerned.

Every version of this system that we tested (26 different versions so far) has been profitable, across many different exchanges, universes, market cap thresholds, ranking methodologies)

Here are the 2021 results. 376% better than holding bitcoin alone. And bitcoin in 2021 was a pretty fucking awesome thing to start with.

Just 3 losing weeks. Also those weekly profits are in bitcoin percent, not cash (which was way higher, obviously). By the way I haven’t added the previous week yet, which was absolutely …. well, just… just look below 😉 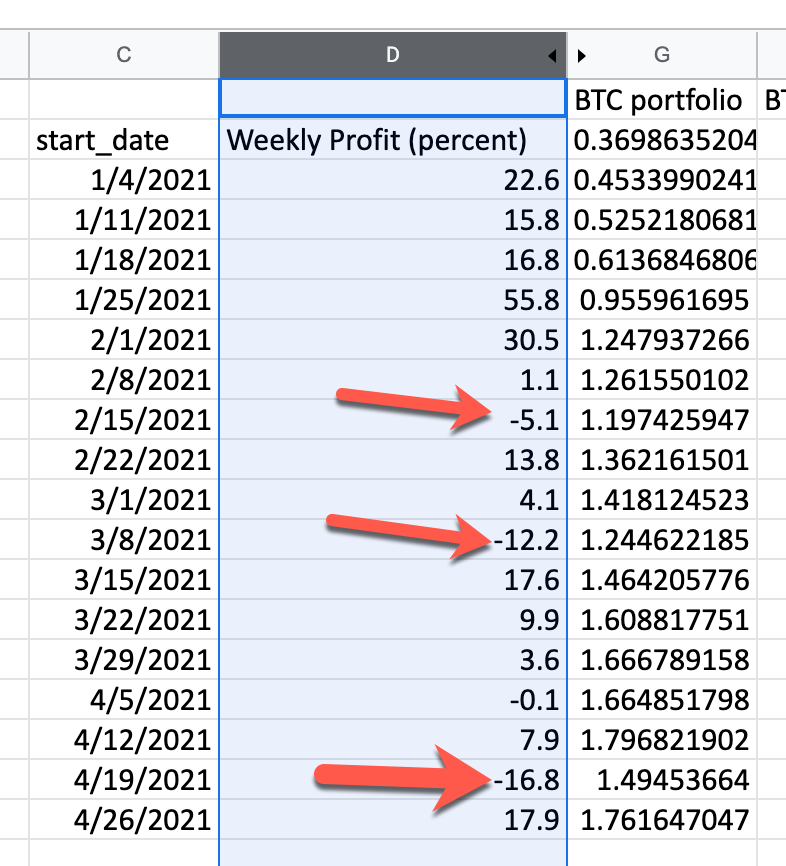 But wait until you see last week’s returns. Make sure you are sitting down before looking at this. I’m dead serious:

Is this streak going to continue like this forever? Who knows, but it’s going on right now, so let’s wield the iron while it’s hot, shall we?

By the way this is a screen grab right off the live Cryptonaissance parser I put together over the past few months. There is a lot more cool sh…it where this came from. Which I’m going to show you on Wednesday.

Look, I’d very much like YOU to make ‘fuck you money’ off this as well.

There are a few ways:

You could take the information in my webinars (and the final one on Wednesday at 3:00pm Eastern) and replicate my work.

I’m serious, if you never watch another thing from me, watch these videos.

But wait until you see the final one, which is going to be epic as we finally cover the most juicy part, which of course is how to trade altcoin season and do it in a way that produces returns like the ones shown above.

Honestly most people are capable of building a decent system this way… given enough time. But time is probably the one thing we don’t have… this will eventually go exponential and then it will be over about a month after that.

I’ve done my best not to be a secretive prick about all the stuff I’ve discovered along the way. I know some of you guys with a programming background are eager to build your own systems and I enjoy helping you do that.

Oh, but you AREN’T a hedge-fund level data scientist? Oh well, you’re fucked then, aren’t ya?

The other way is that I’ll be selling just 100 copies of the automated version of the system.

Because I don’t want to fuck myself later. I’ll be competing with other buyers to buy these coins, and at a certain point we will be moving the market a little when we all buy on Mondays.

And moving the market a “little” adds up, when you are talking about millions and millions.

Which we literally are talking about… making millions and millions of dollars.

So I’m sorry, but not everyone’s gonna get to play this game.

But also, I’m AS USUAL pricing it at a literal steal, the bargain of the century. Like I always do.

(don’t send dumbass emails asking how much, you’ll find out in due course)

But the fact remains… only 100 people will get it. First come first serve, that’s the only fair way. No favors and no stragglers this time. I am dead serious this time.

Scott and I have sworn a blood oath to each keep a 100 seat limit on this one and I expect those seats to fill up quickly.

Be There Or Be Square!

Again, the final webinar and automated system launch is Wednesday at 3:00pm Eastern (that’s 12:00pm for you guys in California, 8:00pm if you’re in London, and 9:00pm if you are in Germany or Madrid).

Here’s the Zoom link for Wednesday.

Here’s the Google calendar link for all current and future RPQ events.