Seriously now – you haven’t experienced excruciating pain until you’ve listened to some Kraut with a German accent trying to rap. It’s no laughing matter, so let’s just not go there. Besides, as you guys know I’m not big on rap – the old Mole likes it hard core electronic Euro trash style, he enjoys some heavy metal (Rammstein baby), and even some selected Classical (Bach simply rocks). But with some rare exceptions I stay away from rap – just not my thing. One of those few exceptions is Ice T as he’s old school and goes way back. I just can’t help but give him Mole’s seal of approval (not that he would care).

Anyway, the clip above talks about ‘the game’ and I think if Ice T would try his luck at trading he would probably catch on really quick. Because the game on the street is a bit like the game on Wall Street. Except the playaz wear suits and maybe there are less drive by shootings but in essence it’s a doggy-dog world and you only survive if you are either connected, ruthless, cunning, or can command some serious muscle. Combine some of the aforementioned and you call yourself a playa. 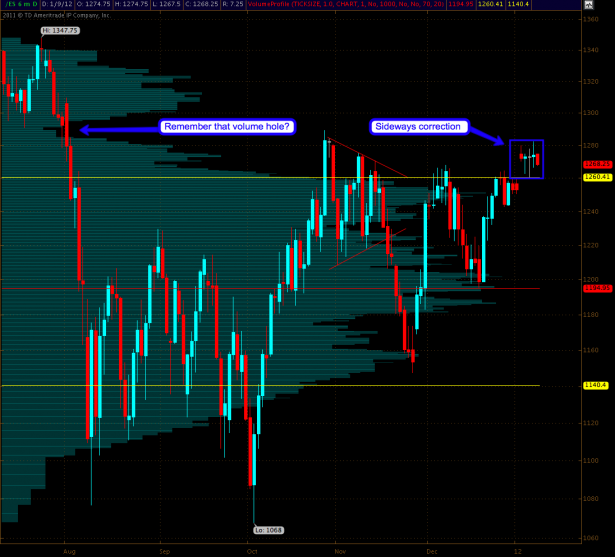 If you squint hard and take a few steps back then you can basically see ‘the game’ at work right on this chart. For that juicy inverse H&S has most retail schmucks pee in their concerted pants in eager anticipation. Little do they know that the market is usually a cruel mistress that eats hapless retail field mice for dessert. The box I highlighted is the cluster of tape we got since we touched that H&S neckline at the very end of the year. Retail was expecting a break out per their textbook example – which usually ignores the fact that there’s often a preceding fake out move. Plus the odds aren’t that strong on H&S formations to begin with.

See it’s all about psychology – as usual. If you went long at 1200 then you probably don’t give a rat’s rectum about a breach here. You made your money and are holding some lottery tickets for a potential move into what could amount to 1300. Sweet move if you can get it – if not – well, better luck next time. That’s how the playa thinks. The retail field mouse however went long around 1250 and is not liking the action right now. You may have heard the expression of ‘weak hands’ – that’s them. Give them a drop to 1240 and they will jump ship in droves – it’s like pressing a button.

The game is ALL about reeling in weak hands – it’s about dangling carrots. And then to do the exact opposite. And even worse – once the playa takes their money the tape usually reverses just to add insult to injury. Thank you sir, can I have another? See, you simply cannot act like a victim when trading the tape – you have to start thinking like a predator. It’s not about being paranoid – that’s counter productive. It’s about anticipating the odds of a prospective move. Since I feel generous here’s another old expression for you – I got that one from my trend trading days:

What everyone knows is not worth knowing!

Makes sense – I hope. If everyone and their mother expects that H&S to resolve then it probably won’t. You’re not the only guy/gal with a fancy charting package and a trading account, you know. That doesn’t mean the H&S formation is completely useless of course. Remember, a few days ago I expected a shake out here – sometimes that shake out comes in the form of a reversal and sometimes it’s a sideways correction. Whatever gets those retail schmucks to make emotional trading decisions. Those are the most profitable ones – for market makers 😉

I have a few more charts below for my subs – please step into my badly decorated evil lair: 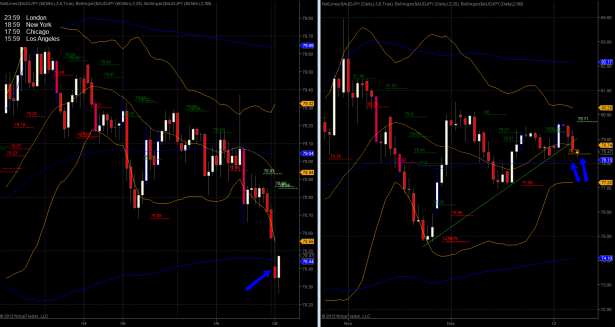 Interestingly the AUD/JPY dropped through it’s diagonal support line and is now testing its daily NLSL. We are a bit shot out on the hourly panel and I expect a bit of a retrace here. But I’m not sure the fat lady has sung here yet and we may just go all the way to 77. That NLSL of course will be key to getting there and you can be either long or short here as we’re right at the line. Set a stop a few ticks away on the opposite side of that Net-Line and be done with it. Don’t be afraid of flipping that trade either though – this trade could go both ways (like those strippers in Vegas last year – well, that’s another story). 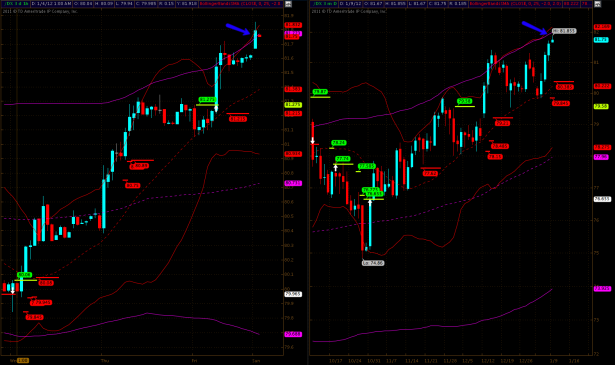 Ole bucky – I put this one on the map for you guy last week. It’s pretty much where I wanted it to go and although it may push a bit higher here it’s starting to look shot out. I don’t want to be long here and I don’t yet want to be short. 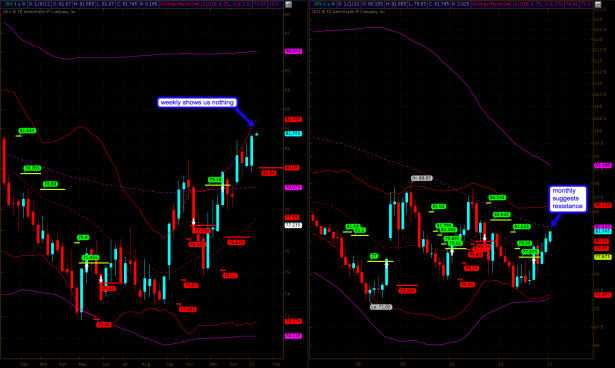 Again, there’s the matter of that 100-month SMA which is now acting as resistance. This is really the first acid test for the recent Dollar rally if you think about it. Since we painted a floor pattern last year the pickings were easy. Now you actually need some trading skills to catch that ride up. 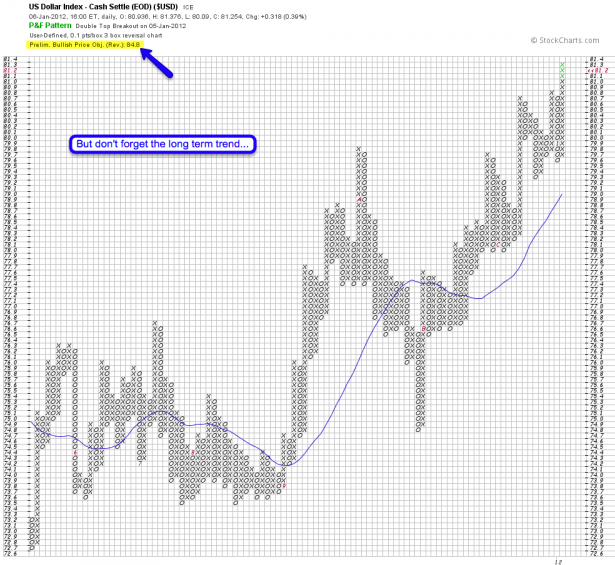 Which is what my long term point & figure chart claims at least. 84.8 – that would be so sweet. Unfortunately it won’t happen anytime soon as everyone and their mother is bearish the Euro right now: 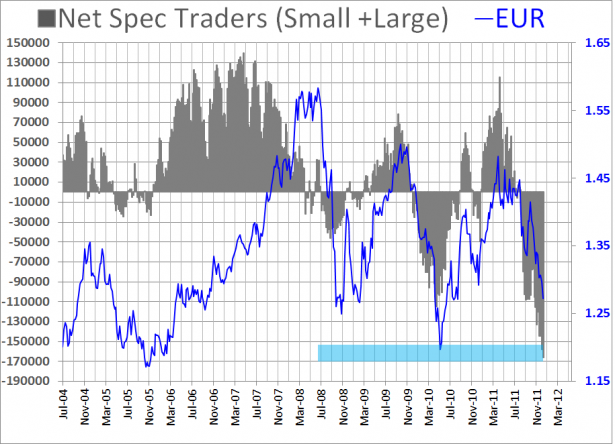 Volar posted this jewel last week – you can see small specs being short the Euro in droves and although they can be right for a bit longer once they start being wrong it usually blows up in their faces. We’ve seen it all before – I don’t expect this time to be the rare exception.

Keep a low profile in the next week or two. It’s playa time and the big boys are engaged in hardcore one-upmanship – everyone’s trying to pull a fast one on the next guy. Retail field mice don’t stand a chance and even seasoned stainless steel rats have to work hard to stay in the game. So why bother? Just keep it small and wait for the tape to show us a more solid setup – at least on the equities side. Over in Forex or in the commodities we continue to see solid setups all the time and I’ll keep them coming as I see them. This weekend things look a bit thin but I’m sure that’ll quickly change once we see some movement.