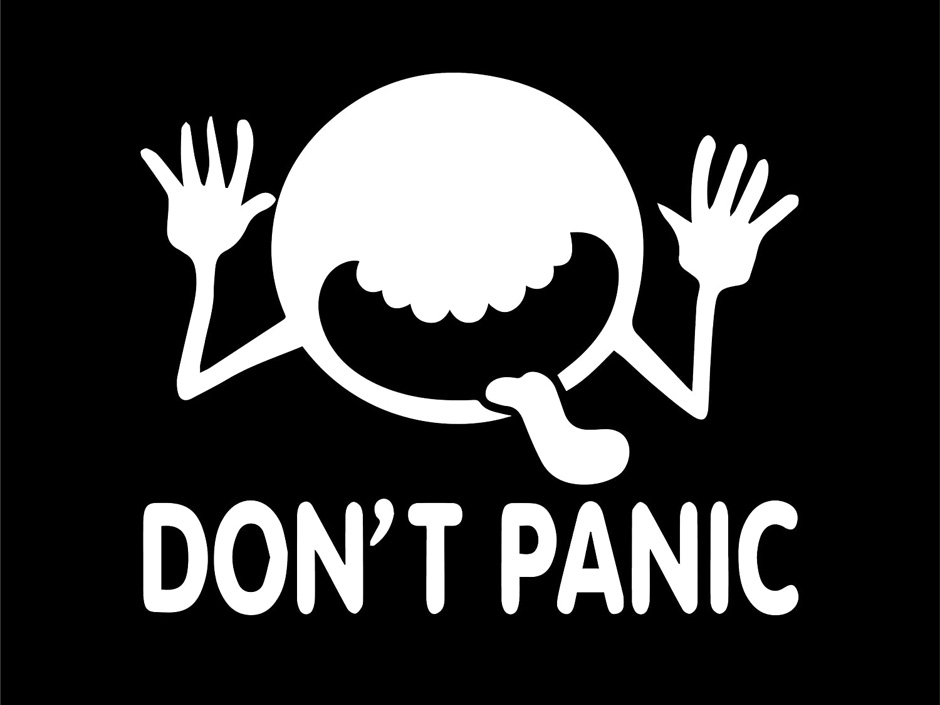 I sure know how to pick dates for hosting webinars or launching new products, don’t I now? Mole’s Travel Curse move aside – we’ve got a new put punter in town! Despite being well positioned ahead of time it still pained me to miss out on most of the action, but much to my chagrin it seems that none of you guys were having any fun either. Which irks me even more to be honest. Step it up guys!

First up let me clear any rumors or lingering suspicions. Despite Convict Scott’s passionate pleas for me to drop this trading blog like a hot potato – I have no intention of doing so. First up it’s always been more of a labor of love than anything else.

Yes, it does pay the bills. And yes, it offers a bit of a security blanket below the gaping abyss that looms below every professional trader throughout his/her career. As I said the other day: not gonna lie – trading for a living is HARD. And doing it for 13 and counting is even harder.

But in the end it’s what I’ve been born to do. And who’s going to keep you guys in line and with the eye on the price if  not for this cantankerous old market megalomaniac? Besides I enjoy slapping you guys around way too much. 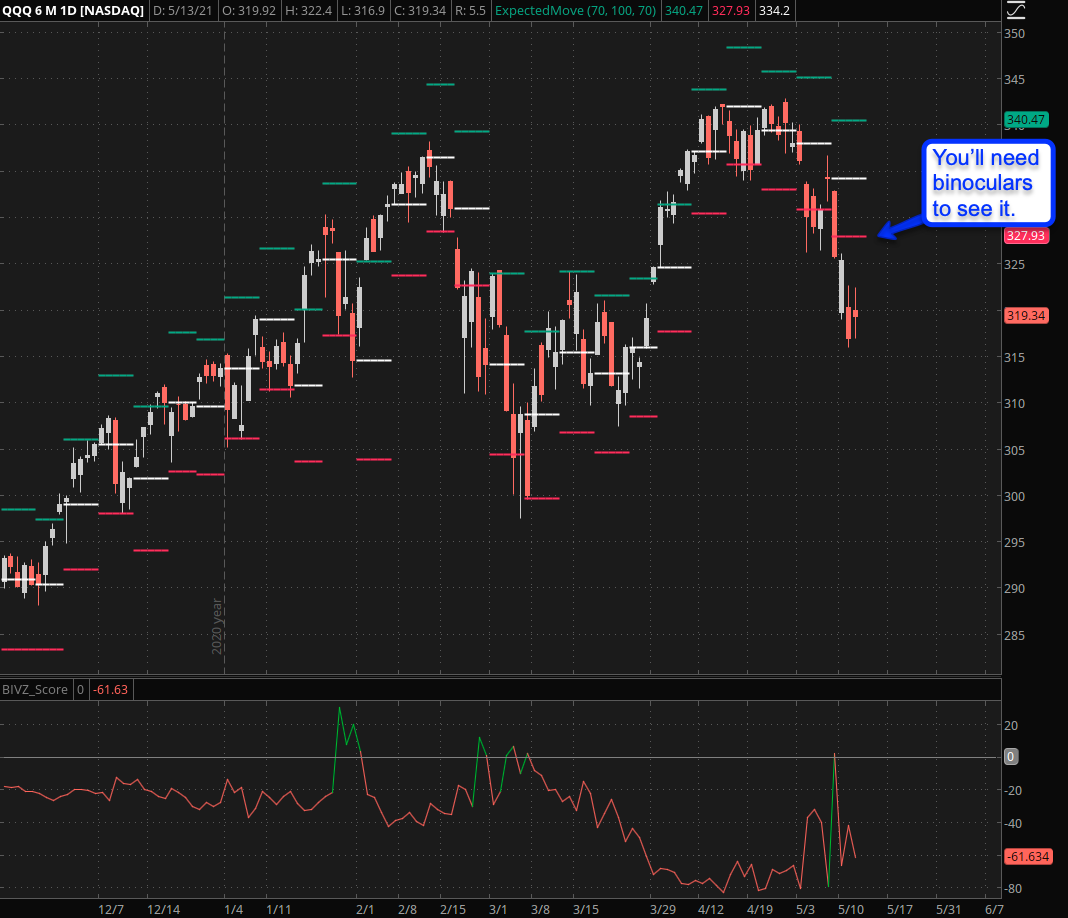 Okay with that out of the way. Where to BEGIN?? I have more compelling charts than I know what to do with. Let’s start with the Cubes which have dropped so low that you’ll need a pair of binoculars to even find the lower expected move. 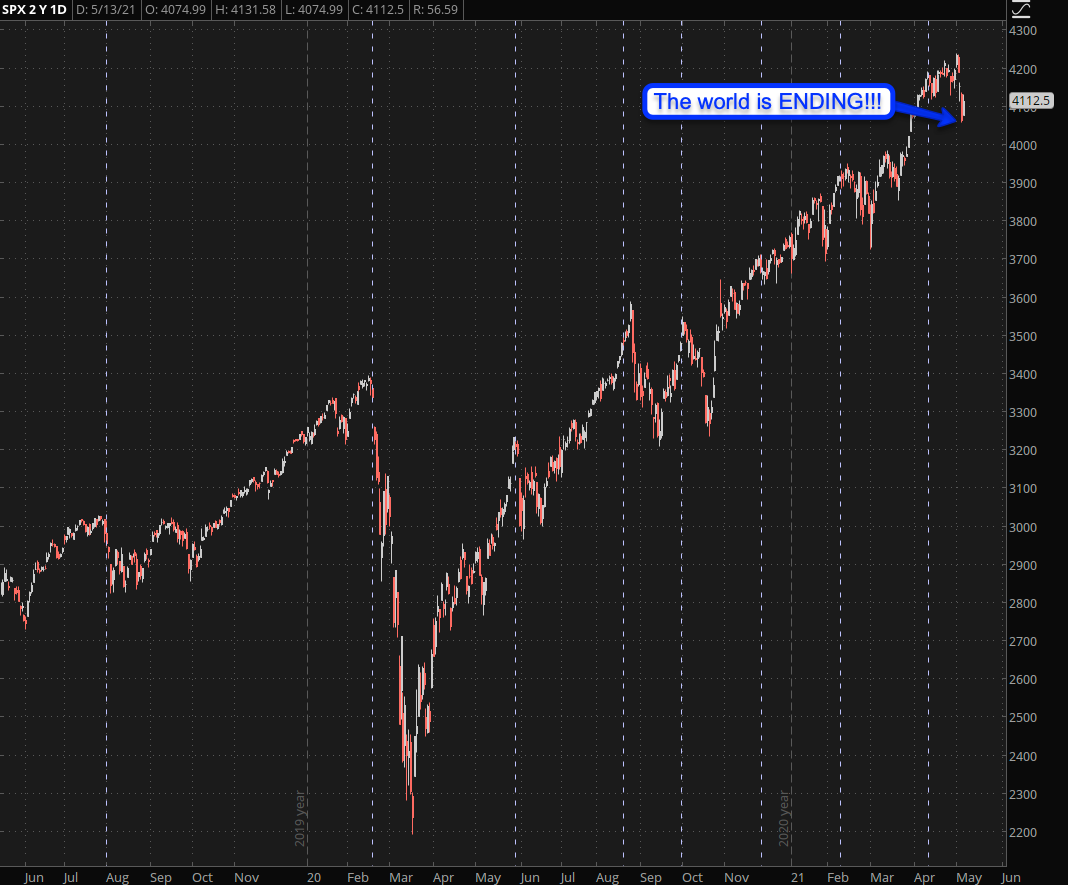 Now if you believe all the doom and gloom being peddled on ZeroEdge you’d think that the world as we know it may be ending. Which may be true in some respect but not in equities, at least not today.

I mean so we dropped to levels we traded in mid March. Yawn. Wake me up when we trade below 4000… 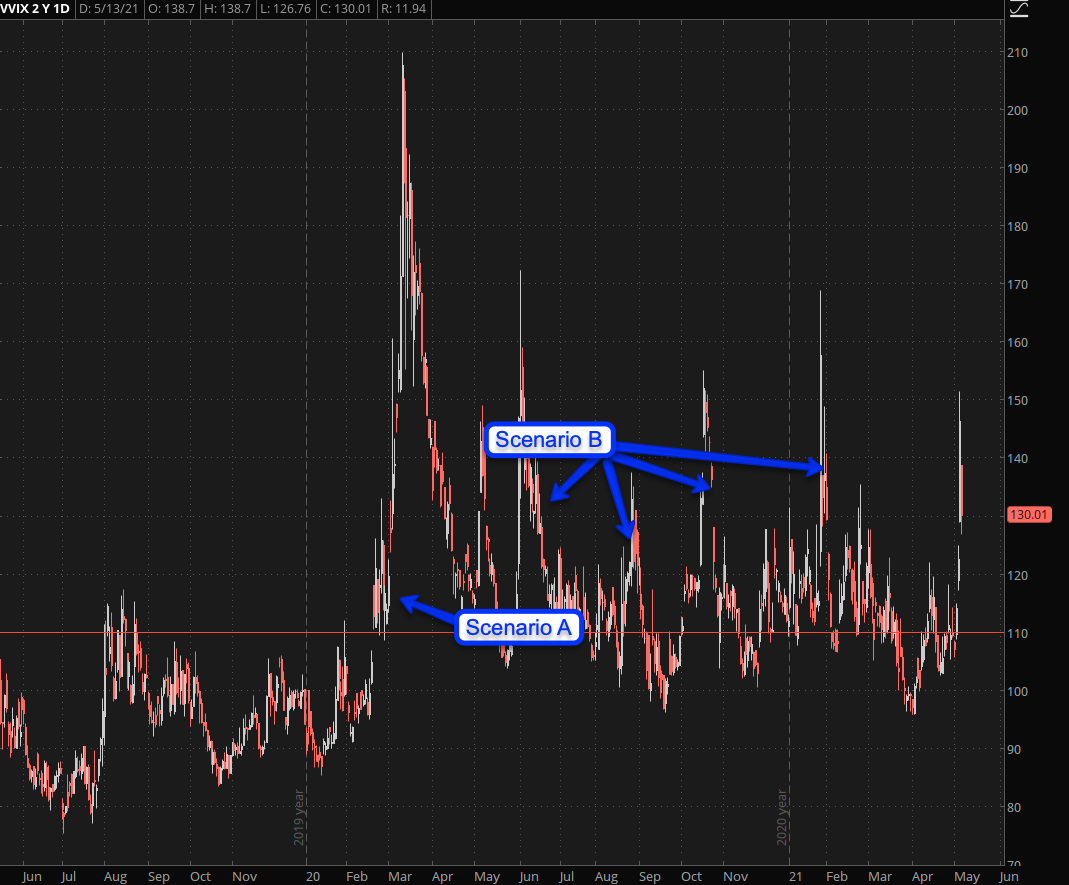 You recall that last week I gave you two scenarios for the VVIX (assuming you are a sub, otherwise get out of your own way and sign up here). We got the less likely scenario, which was what I was hoping for but had the smallest odds.

This time around we are facing a similar situation. If you look at the VVIX then you’ll see that most spikes that breach the 130 mark reverse back lower and get us back to at least the edge of the VOMMA zone which stands at approx. 110.

The few times it bounces from there and breaches the prior spike all hell breaks loose. That’s scenario A – the big whopper. It has a 10% to 15% chance of happening in the next week, which isn’t very good. It happens and my puts are hoping it will but right now I care more about what happens on a short term basis. 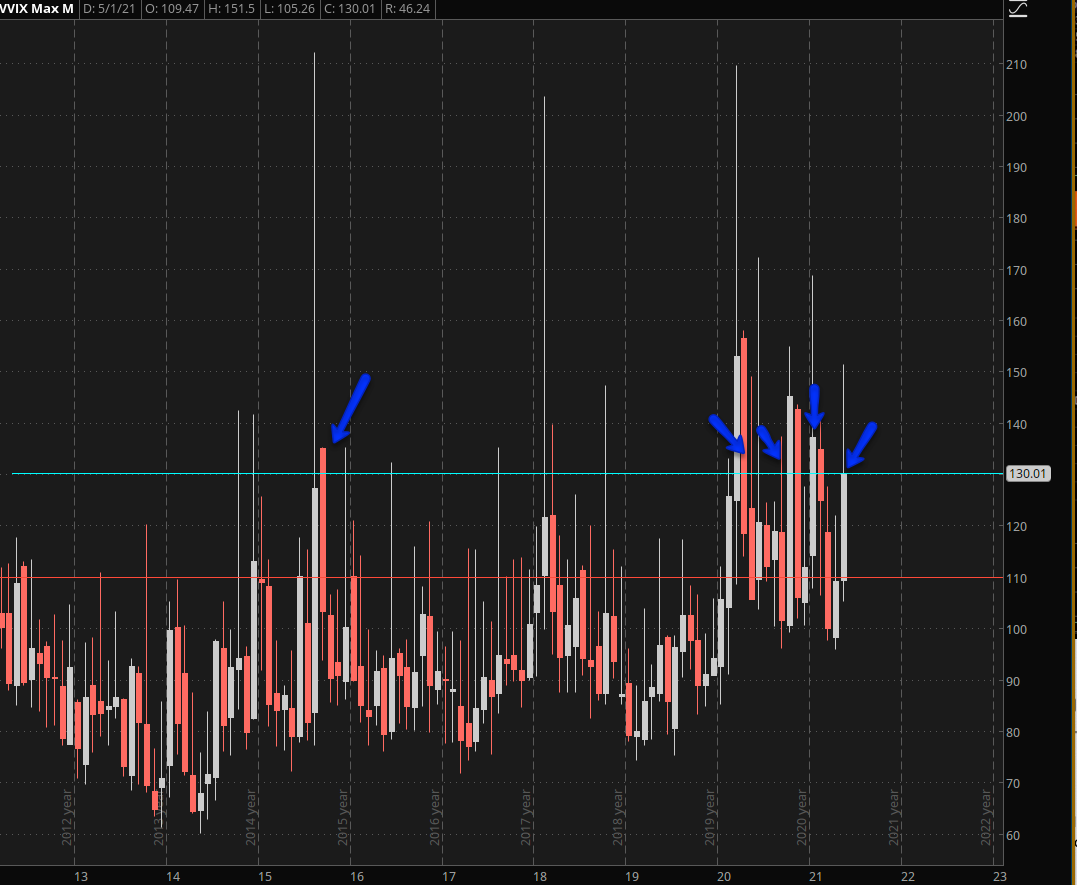 Medium term I however think that we have at least a 30% shot for a big downside correction. If you see the number of times the VVIX closed at or above 130 then you’ll see that it is very rare. So something appears to be wrong in the state of Denmark. 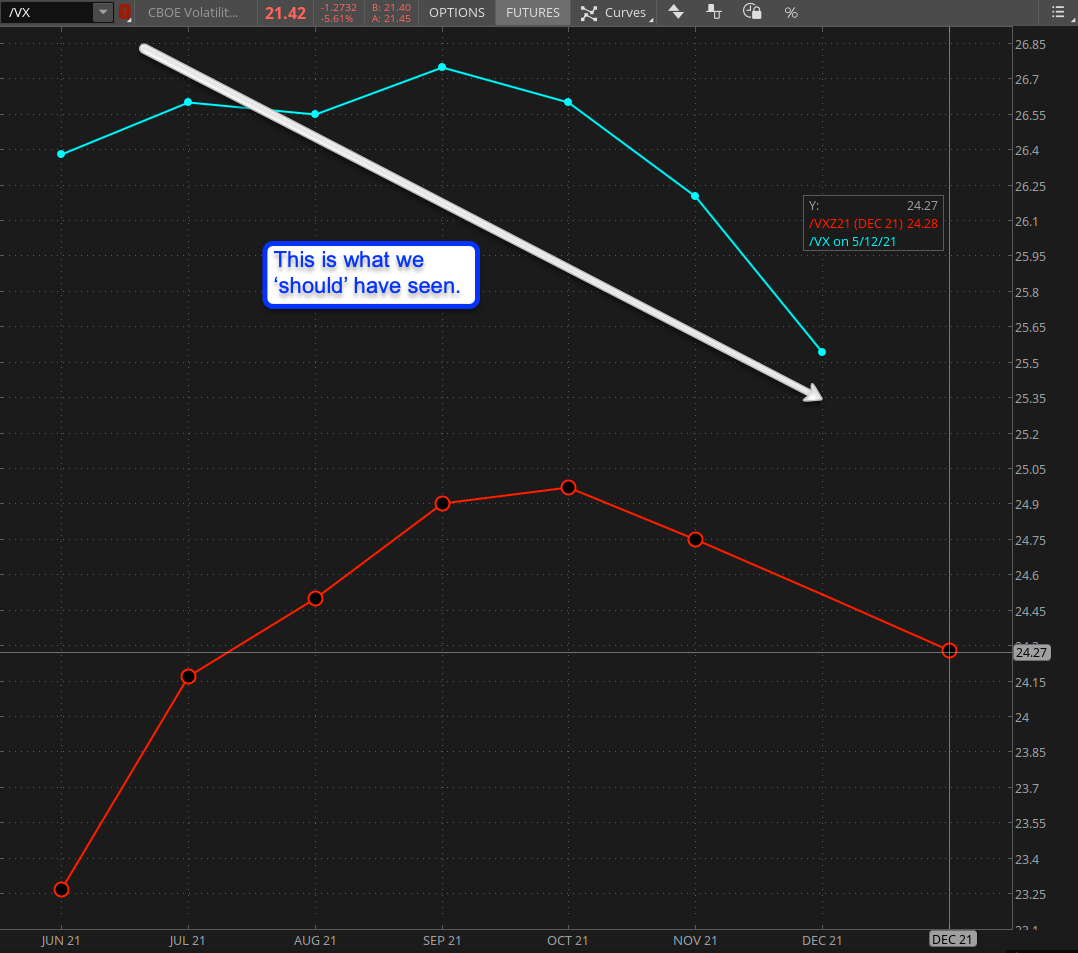 The one graph you should definitely pay attention to is the VX term structure and more related, the possibility of backwardation. This is something most people don’t pay much attention to which is why they continue to get their member slammed in nasty bear traps.

The take away is this: There wasn’t any. I added last Wednesday’s term structure (cyan on top) and if there was true FEAR in the market this is what we should have seen.

But we didn’t and thus it was a great opportunity to be short front month IV. 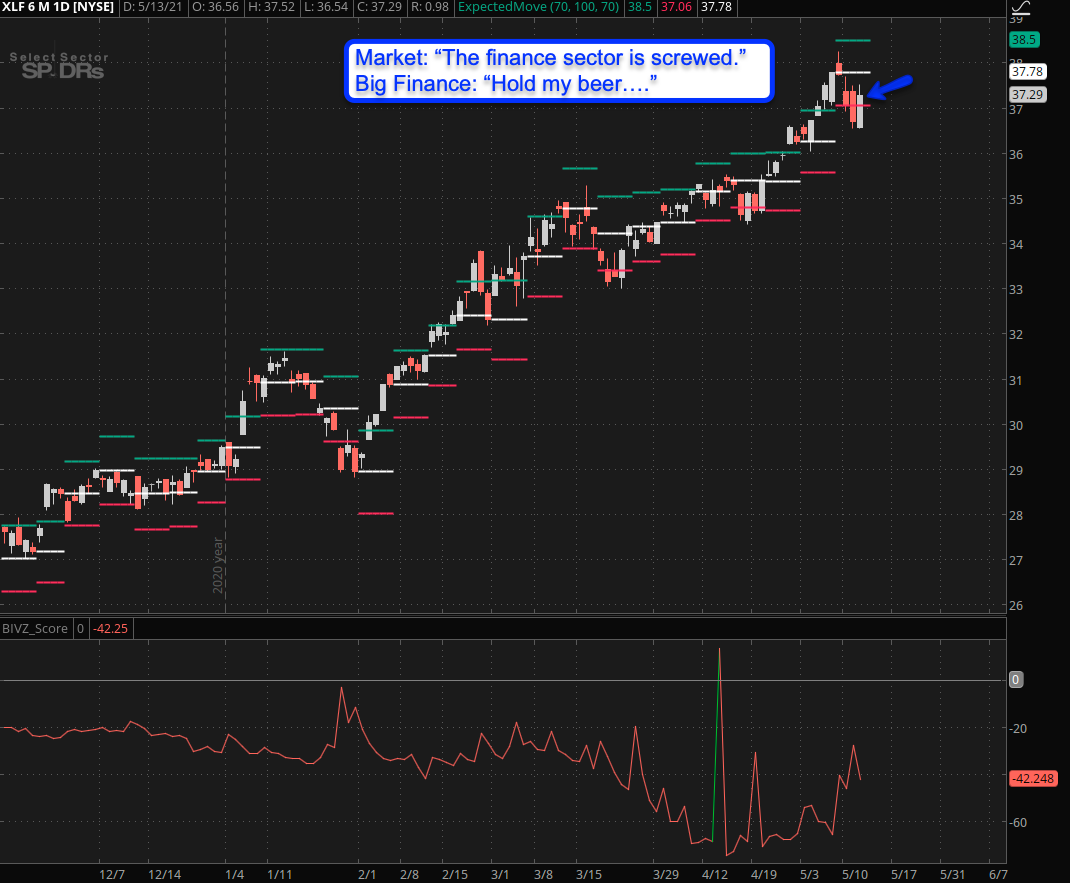 What really stood out to me al last week was that the XLF barely budget throughout the entire drama that unfolded. In fact the Thursday session already pushed it above its lower EM. So clearly – and as I have emphasized over the past two weeks – the bulls are focused on finance right now until it’s time again for sector rotation. 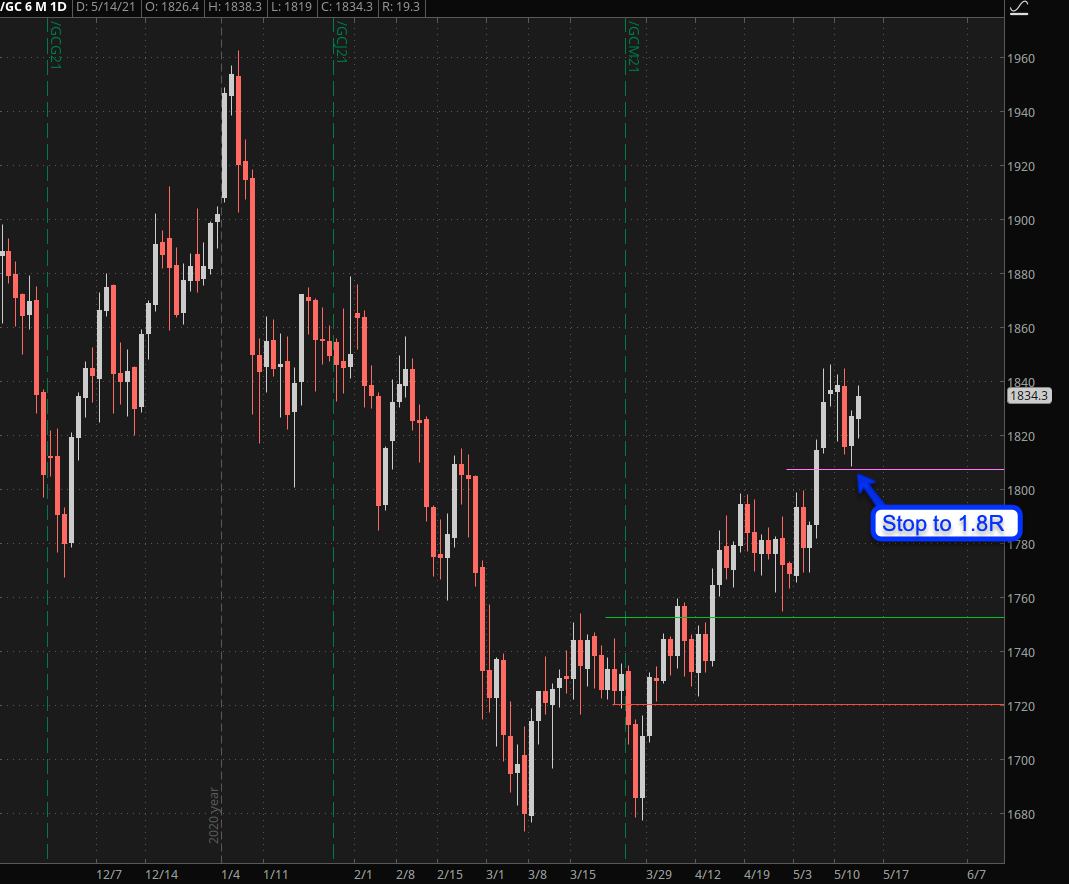 When things start to slide in equities one of the main questions I always ask myself is ‘where is the money going’? Is it rushing into gold? Yes the futures are up but I would not call this a gold rush really. And the trend has already been bullish for the past few weeks.

By the way – I’m now moving my stop up to the 1.8 mark. If you’re still in this one I suggest you do the same. 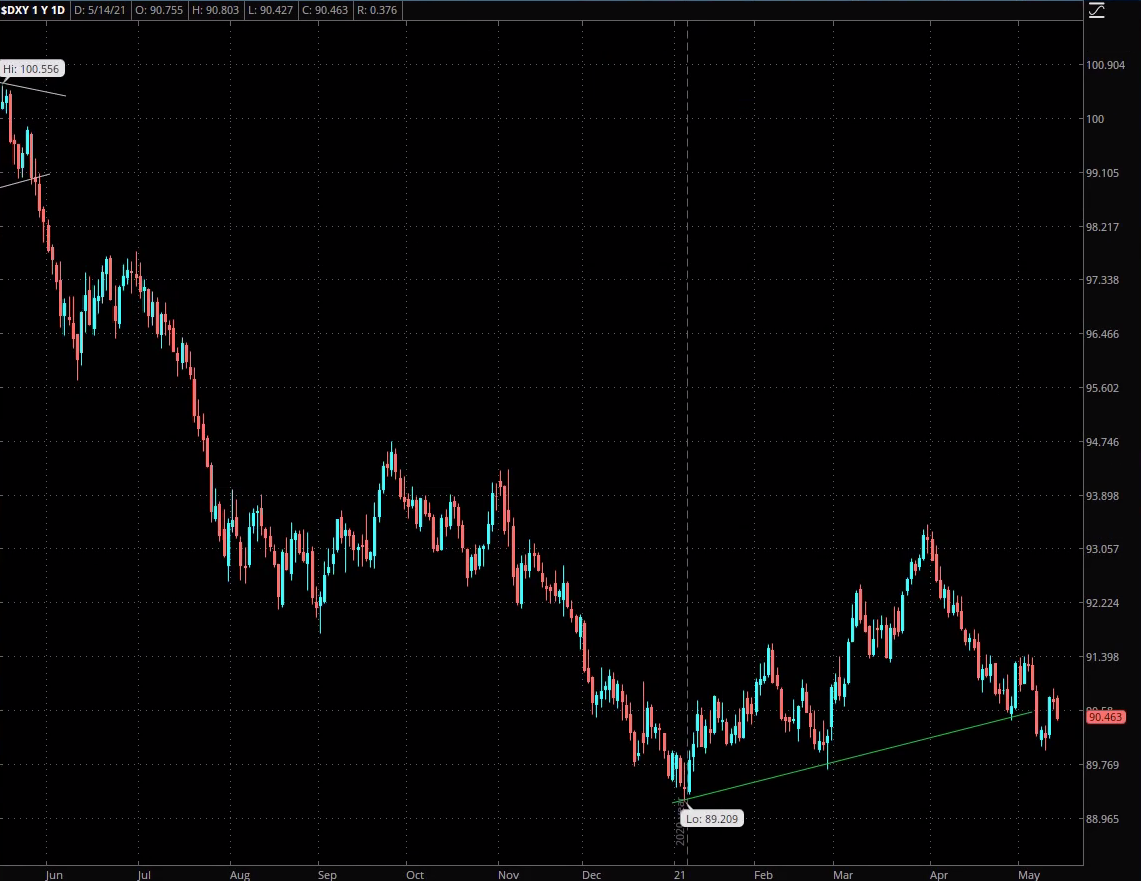 Is it flowing into the Dollar? NOT REALLY – again much to this expat’s chagrin. 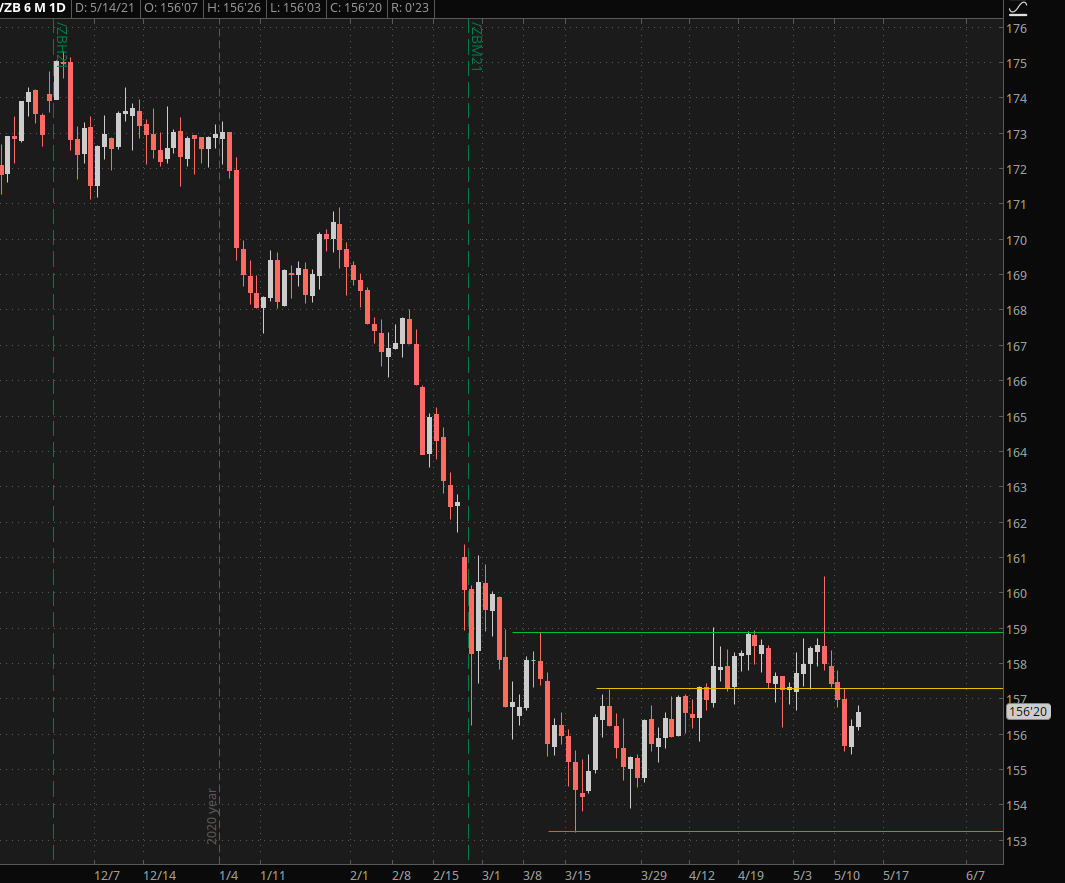 Is it flowing into bonds? Well, that market isn’t going anywhere fast these days. So I’d say no again. 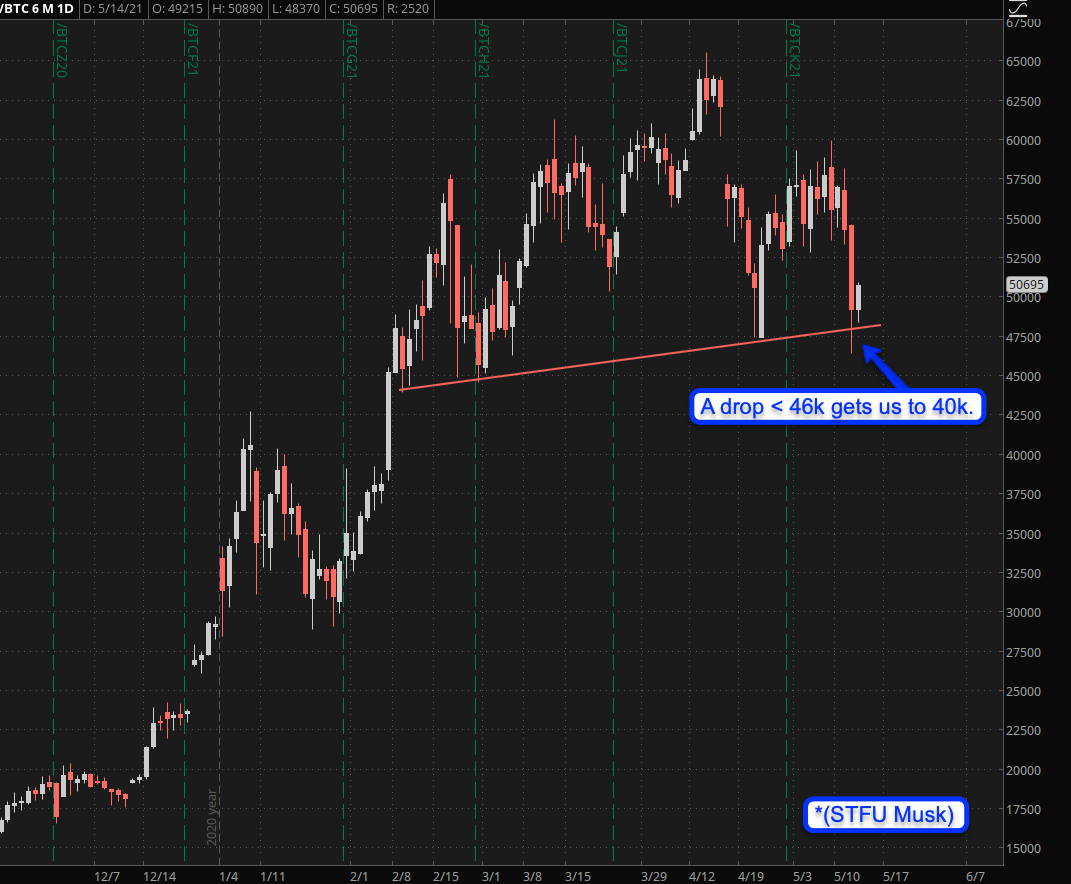 Bitcoin? Obviously NOT! By the way – Musk, if you are seeing this – please STFU about Bitcoin. You are scaring the children.

So where the heck is it going? Frankly I have no freaking idea and I don’t think it’s gone anywhere.

All of this casts a very dark shadow on the short term bearish scenario. And that brings us to the laundry list of setups I have put together for my intrepid subs: