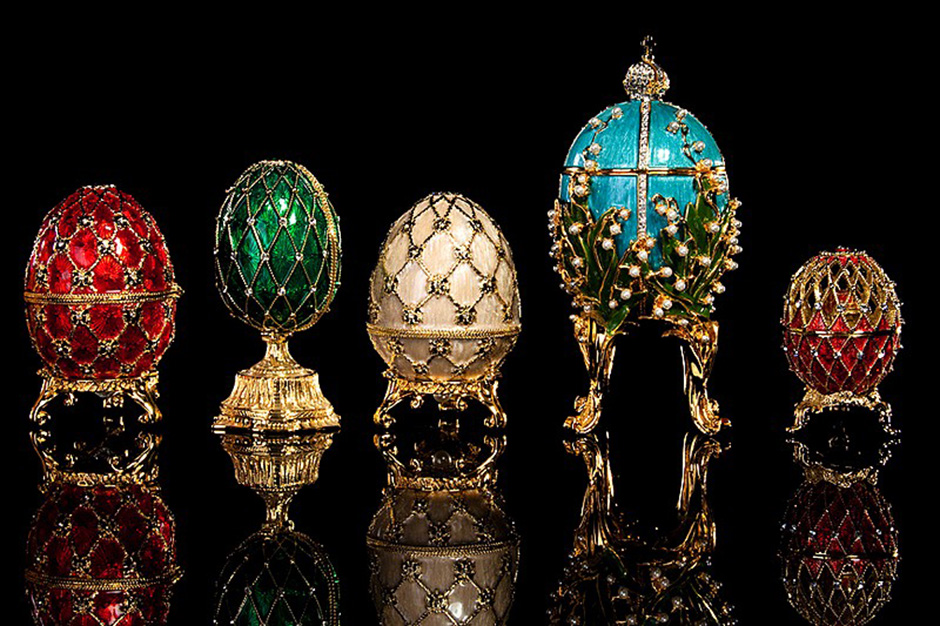 It’s been a great first quarter for us all and I propose to spread it around a little and celebrate Easter in style. So how about surprising your little ones with a Fabergé nestegg instead of some crusty old chicken egg laced with industrial Chinese paint. A little too pricey for you or you weren’t able to find $33 Million under your couch cushions? Well, try not to look like a complete loser and at least get yourself a few dozen gold plated chicken eggs at the low price of $138 – each that is. I’m sure for that deal their phones are ringing off the hook right now. Crikey – I’m in the wrong damn business! 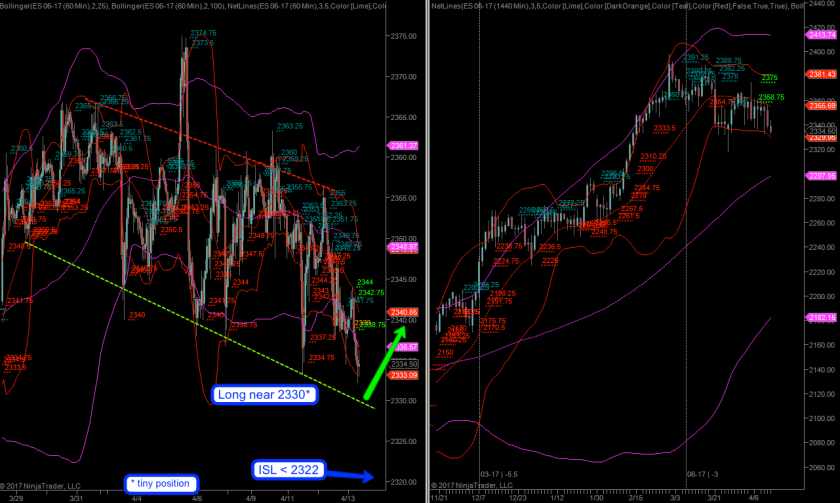 Alright since it’s the last session before Easter I’m going to run you through some major symbols as we’re seeing rather fascinating formations across the board. Here’s the E-Mini which has been testing everyone’s patience and quite frankly is looking like it’s about to fall off the plate here today.

Which of course has my fullest attention as I love to sense fear among market participants. I’m just like that little redhead in high school you had a crush on but couldn’t muster the balls to actually chat up. And right you were to not embarrass yourself because she (and yours truly) can smell fear ten miles against the wind. And equity holders are literally soiling themselves right now given all that uncertainty and increasing intra-day volatility.

So a long position near 2330 would be quite appropriate – ISL near 2322. But since this is a lottery ticket (the chances of a slide lower are real of course) position sizing will have to be a very small at 0.25% max. Warning: This is a LOW PROBABILITY HIGH PAYOUT kind of deal. So if you’re following me into the abyss then don’t be stupid and ‘go all in.’ 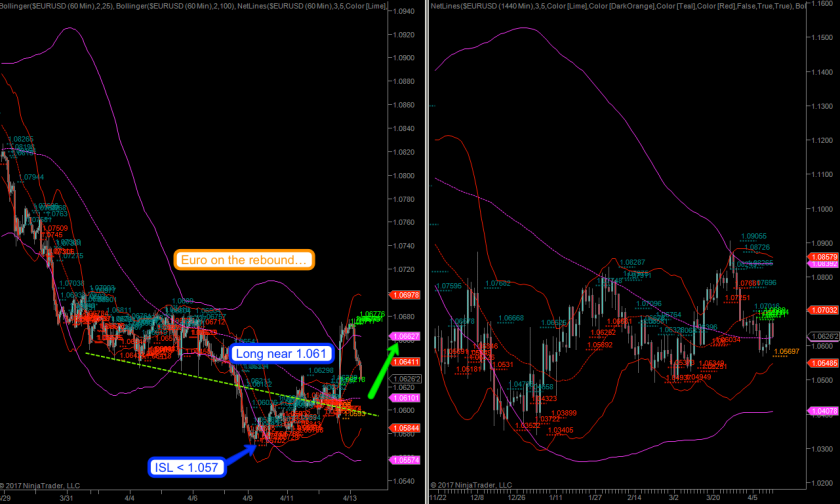 Let’s wrap up the setups and then I’ll continue with the general overview. The EUR/USD couldn’t hold its water overnight and gave back almost all the juicy pips it gained yesterday after Trump’s Dollar hammer. I don’t think that we’ll see much lower prices here but as I’m a cheap old SOB I’ll wait for a drop into 1.061 before grabbing a small long position. Stop goes below 1.057. If that one goes then we may just be bypassing prison and head directly to par. 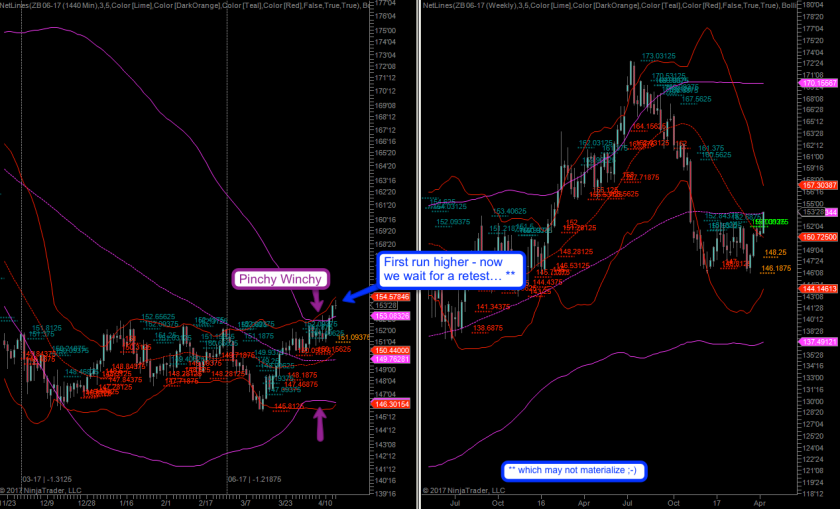 Bonds have continued higher which was a scenario I proposed sometime last week. It was either continuation or a retest of the 100-day SMA which is where I would have gotten long and then some. As it’s gone the other way we may actually not see a retest in a very long time. Because once she takes off she has a tendency to put the squeeze on anyone left holding the bag.

Of course in terms of price action this is nothing unusual. Bonds had been pushing sideways for months while the long term Bollinger was compressing further and further. Something had to give. Unfortunately entering early may have resulted in a whipsaw stop out and I usually prefer to get involved post retest UNLESS I see an irresistible entry formation (which I didn’t).

So let’s see what happens here – even if she continues higher for a while, don’t fret. There will be many great setups on that chart over the remainder of this year as I believe we may be entering a completely new (bullish) market phase. 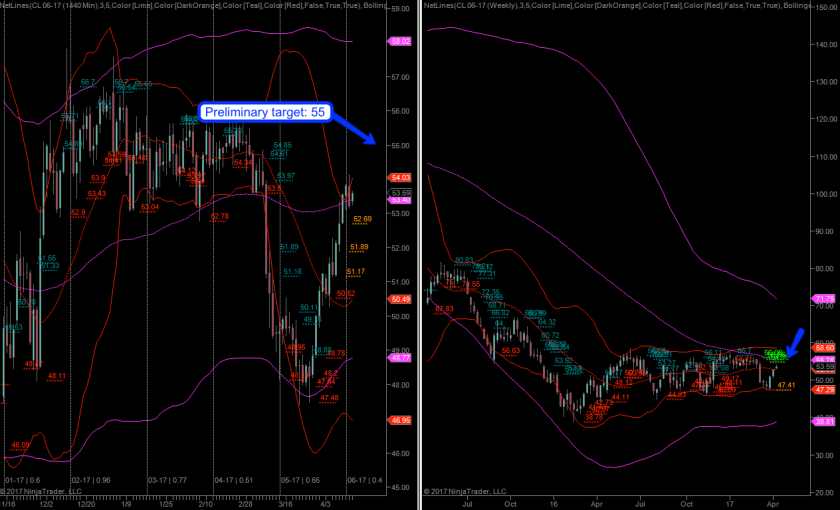 Crude is actually in a similar formation but it’s lagging behind about 2 to 3 weeks. Which means it’s possible that we may actually be able to grab an early long entry once we see first attempts to paint a correction. I’ll definitely have this one on my watch list and will keep you guys posted. 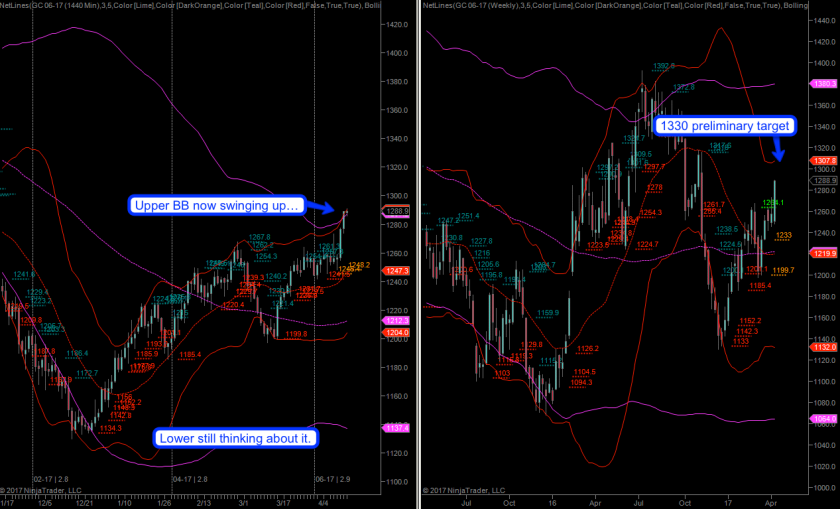 Gold has now pushed past our preliminary target, which was a scenario I also suggested yesterday. So if you’re still long a few contracts then good for you! There’s no telling when she’ll turn as this is the type of setup trend traders are willing to pay good money for. 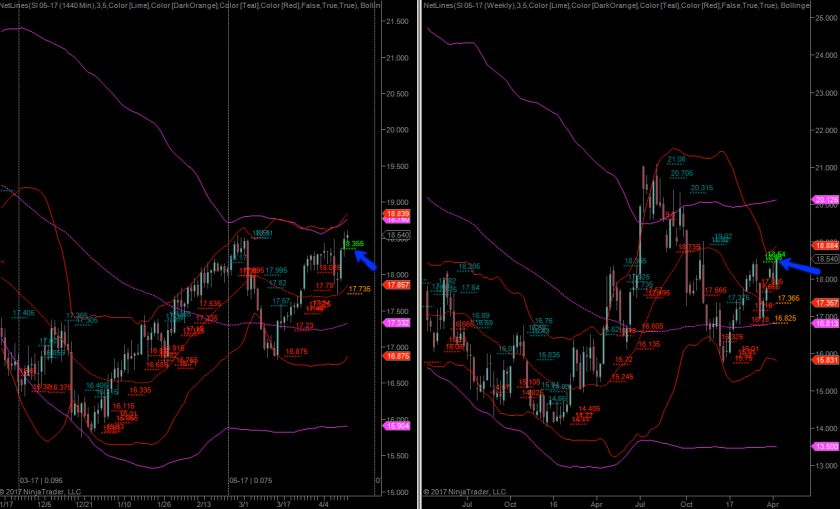 Silver lagging behind gold a little but also on the way now. While gold has already pushed past its weekly resistance (the Net-Line Buy Level) this one is still nibbling on it. We may see it fail here but it doesn’t really matter as both charts look bullish as heck and should also bestow us with plenty of long opportunities over the course of this year. 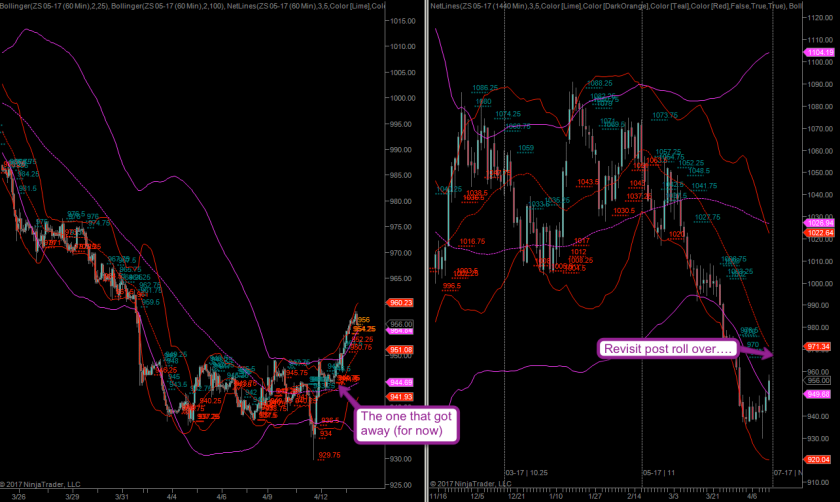 Now here’s the one that got away yesterday as I was too busy writing long winded posts on market sentiment – soybeans. Which is a shame as I actually was pining for a long position here and that little dip and retest of the 100-hour SMA obviously my number on it. Now we are condemned to wait for a retest here as well, which unfortunately may not come for a while. Well, you can’t catch ’em all – but you damn well can try!

That’s it for me until Monday. Wishing you all a very joyful and chocolate filled Easter weekend! And if you feel like passing on some of that joyous Easter spirit to your humble host then look no further than the member signup page