UPDATE 9:44am EST: That’s not what the doctor ordered. I sincerely hope we’ll hold the 918 ES pivot, otherwise we might have to abandon our 957 mark. Not much to say otherwise – YM futures at 8891 pivot – either this is a nice little fake out or I just missed an opportunity to load up at the top.

UPDATE 9:56am EST: I can’t help but think that this might be little bear trap. Compared with even the Friday open I see very little volume. This looks like simple profit taking, not like a sell off. Also, the Yen is completely flat right now and the TNX is holding 2.4% – this does not make sense.

Not sure what to think just yet. I’m kind mad at myself for not backing up the truck on Friday afternoon – was split on whether we’ll see something like this or a rally into 957. Anyway, I’m watching that 918 RL on the SPX like a hawk.

UPDATE 10:37am EST: Alright, so far so good – I might have been right about that little fake out – I’m on to those bastards! 🙂 A few thoughts: NDX seems to be leading today, which is positive, but momentum on the SPX is quite feeble at best. Where is that post-holiday momentum I was banking on? That’s how it works when you have expectations as a trader – you usually get disappointed at best or take losses at worst. I’m just glad I didn’t load up on those puts at 919 as 930 is soooo much sweeter. Let’s hope this thing busts through to 957 – as of now I’m in a holding pattern.

UPDATE 11:04am EST: There is zero momentum in the tape right now – what is this, a Mexican stand off? Feels like those damn holidays all over again.

UPDATE 11:21am EST: In other news: Tim Knight seems to be sick in bed and so is Berk today! He’s is in bed with a stomach flu. We all wish you guys well – hope you’ll sweat through it.

That’s it – I’m putting on my Hazmat suit – Armaggedon is upon us… Meanwhile the market is boring the heck out of me. But at least we still scraping 930. To load up on puts or not – that is the question….

UPDATE 12:03pm EST: The ES futures just bounced off the VWAP again – seems like that is the line in the sand today. If we breach through that one I might get nervous. Frankly, I’m very annoyed and judging by the comments everyone else is. But the market does what it does – we are only along for the ride – let’s be patient and wait for a distincit signal one way or the other.

UPDATE 12:30pm EST: I’m looking at the VWAP on the index futures and the Yen and it’s almost completely flat and horizontal. This is worse tape than during the holidays – if I wasn’t worried about grabbing those long term puts I’d walk away for today.

UPDATE 1:00pm EST: There’s definitely a buyer lurking right at the VWAP on the ES futures. I just watched the ES (and the YM/NQ) push up along with the Yen. However, that said – this game can’t continue forever and I’m starting to think we’re at a breaking point here. The question is this: Perhaps it’s less risky to grab some long term puts right here and eat those damn 30 points should this turn out to be a little trap and we rally to 957. I see the momentum shift upwards right now and thus I remain patient. Anyone of you guys making a move?

UPDATE 1:22pm EST: HuckFinn is asking what charts I’m looking at to get the VWAP. 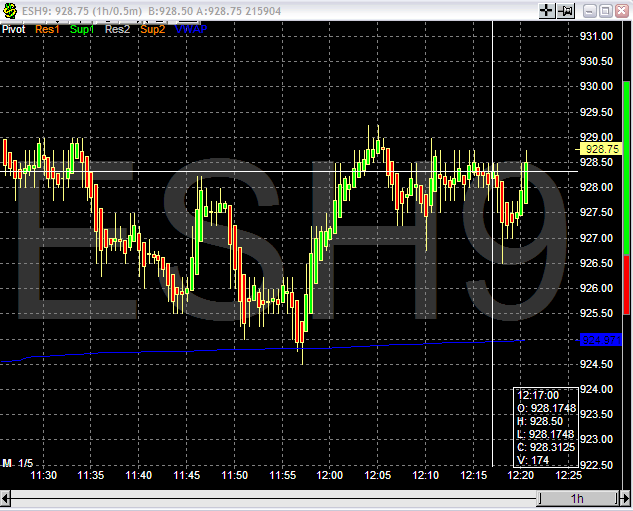 I’m using QuoteTracker with OptionExpress feeds – it’s a free charting app that works with tons of streaming feeds (and no, it doesn’t support TOS).

UPDATE 1:36pm EST: Okay, I just uploaded a new overbought-victims-list – download it and import the file into Prophet charts via the ‘Watch Lists’ menu. Some of them are not just ready yet but should be on your radar. Almost all of them are heavily overbought according to shortsqueeze.com (I have an account) – if they break they’ll bound to move a lot.

UPDATE 11:22am EST: For crying out loud – are we going anywhere today?