I’ll be quick today as there isn’t much to be said until the boyz at Jackson Hole are done laughing in their gold plated seats. Just about now they should be getting frisky and inaugurate the entertaining part of the conference by throwing darts at an IMAX size map of the world. As good ole’ George once said – it’s a big club and you ain’t in it. Console yourself by the fact that at least you’re here, which means you saw the light and learned how to focus on the few parameters you have control over. The rest is just noise – it’s entertaining here and there but mostly it’s just noise. Focus on yourself and your loved ones and you’re going to be fine.

Anyway, I do not recommend taking on any positions at the moment, the exception being your automated systems and even there I would suggest reduced position sizing. 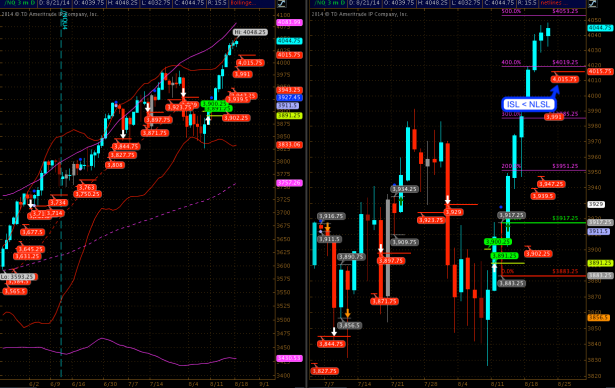 On the equities side it’s turned into a squeeze from hell, but as you can see the candle ranges are getting shorter and that means we’ll most likely are going to see either a fast blow off top or a correction by the EOW. As I’m managing this campaign Heisenberg style I’m now trailing it (manually) at 25% of 5R. Which means that spot below the daily NLSL is perfect for riding out any shallow reversals. If we get more than that it’ll probably dip much deeper, perhaps up to 50%. It’s been a brilliant campaign so far and at this point we just watch and let it play out. 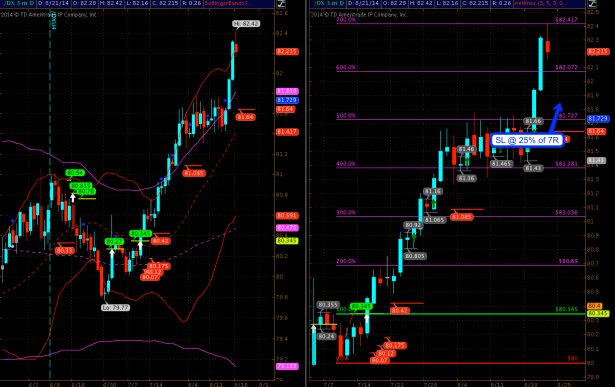 Ditto on the Dollar side – it spiked to 6R today and I intend to hold this one as long as possible. Remember, let those winners run. Sorry the chart is wrong – I was blinded by all that green apparently. It should say 6R but my stop is in the right place, trailing at 1.5R (~25% Maximum Favorable Excursion). I never thought this one would run this far but I’m not one to look a gift horse in the mouth – some of those mares have a bad temper!

So, no setups until Monday – I’m actually keeping myself busy with some pretty advanced quant project. Nothing like giving that ole’ noggin’ a little kick every once in a while. BTW, how’s everyone enjoying DarthMole?