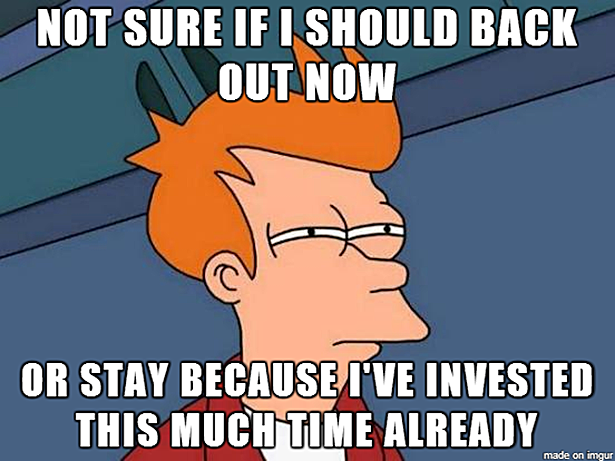 The tendency to treat money that has already been committed or spent as more valuable than money that may be spent or acquired.

Also known as ‘irrational escalation’, this precious gem happens to be hard wired into our human psyche and it will haunt us to the end of our brief existence on this mortal coil. So what does it do and where does it come from? Well, imagine yourself investing a few thousand into your best friend’s company and he runs off and blows through all the funds without making any major progress. Sure enough, a few months later he’s back desperately asking for a reload. Your brain kicks in and whatever is left of your cerebrum (again, your mileage may vary) mutters that he’ll probably blow the next round on fancy office chairs and strippers as well. However almost immediately there’s this nagging thought in the back of your mind: Unless you give the guy more cash to get the job done and launch the product/service/prototype etc. the money already invested prior has been for naught. What to do?

Well, I leave that particular decision in your capable hands. I personally would invite him for a swim in my custom designed shark tank (yes, they have freaking laser beams) and make sure he finds a way to pay me back. But the topic at hand is that cognitive dissonance developing in your cerebral cortex: Damn it, I should have never gotten myself into this! Which is exactly what you’re thinking as you find yourself writing him another check. Why? Because the sunk cost effect is closely related to another cognitive bias we’ll cover in the future called ‘loss aversion’. Basically it’s the tendency for people to have a strong preference for avoiding losses over acquiring gains.

Yes, that one is a mind bender in its own right but it’s basic human psychology. Most people would rather take action to protect themselves from losing a Dollar than to spend the same energy earning that Dollar. And given the situation our plucky investor friend here finds that he’s more worried about losing his existing investment than to lose even more. I know that sounds strange – but if you mix in a potent cocktail of hope, self delusion, and guilt for doubting the vision of his good friend then odds are that he’ll convince himself that this new round of funds somehow will render his existing loss non-existent. And right here is the rub. It’s all about avoiding the feelings generally associated with loss, disappointment, failure, wasting time, etc. It’s all such a downer, so let’s just avoid it altogether and pretend it didn’t happen. And so you somehow wind up throwing good money after bad money.

And this doesn’t just apply to the financial arena. Back in the days, when I was working for the man as a software consultant (i.e. coding monkey for hire), I saw my share of failed projects. And most of them wind up as a furry mess of code exactly because of the sunk cost effect. Perhaps they hired some crew in India to wire up a solution for them (i.e. website, API, CC processing system, etc.) and it was full of bugs, security holes, and performance problems. The guys who inherited that mess spent months if not years fixing it with scotch tape and a mix of blood and tears. Of course they kind of got it working but as soon as some product manager brought up the topic of adding new features all kinds of alarms started to go off in the dev department. And so they wound up patching it up a bit more – adding more bad code to existing bad code.

Of course we all know what the right decision would have been. Scrap the entire thing and write it from scratch again – this time with a crew of people who knew what they hell they are doing. But that rarely happens – it’s simply against human nature and I dare you to propose to anyone to let go of a pet project they have nursed along for who knows since when without anything to show for. If you would have asked them today if they would take on an endeavor of such a magnitude without reward they’d tell you to stick that idea where the sun don’t shine. But human beings are strange creatures and we just love to watch those frogs boil.

In the trading arena I see this all the time. Someone drops by the blog and asked about a shitty campaign they are obviously trapped in. They should have never gotten to that point to begin with and the only thing left to to do is to close it out and take the loss. Knowing what we know that is the only logical solution and perhaps it’ll serve as a learning experience for the future. But people get trapped in bad decisions all the time and spend a lot of energy pretending to themselves that it didn’t happen. So they stay in bad trades (while cutting winners short – a.k.a. the disposition effect – topic for another day) and mentally contort themselves into impossible positions hoping to find a way out.

Ve careful criticizing those people because I guarantee you that it takes only one bad decision to find yourself in the very same spot. None of us are immune and that includes yours truly. The only remedy is to know ahead of time when your campaign needs to be closed out. Even better – expect to lose every time you take a new entry. This should be your default mind set when trading – expecting to be wrong and most importantly – actively preparing for that eventuality. Because statistically you will be proven right (about being wrong) the majority of the time. Unless you can embrace a bushido mind set during trading you will most likely be driven by fear and therefore are doomed to fail. Expect to lose each battle – fortunately, if you do it right (and that’s what we do) then it’s only a paper-cut and not a flesh wound.

Lesson learned: Treat trading just like dating on POF.com. There is always always another campaign out there, so don’t get married to any of them. If one turns out to be a loser, don’t sweat it and simply cut your losses. And if nothing else (while we’re on the topic) – photoshop your picture, deduct 10 pounds, add one inch, skip five years, and always wear a condom 😉