I’m in the midst of reimplementing the Mole indicator into NinjaTrader and I am loving it. For six months after my move to Spain my hands were tied due to most of my equipment sitting in storage back in Los Angeles. My recent trip’s purpose in part was to retrieve some of the tools and backups that I had left behind in all the confusion of breaking up my tent in California. 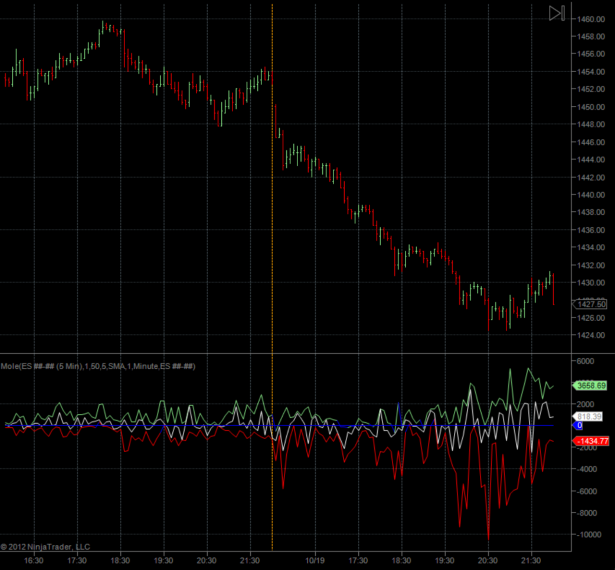 Here’s a little sneak peek – I’ve managed to plot all three main signals and they look very near to what I’m seeing on the TOS side. The small differences you may see are not due to my code, it’s in the underlying data. And this may actually turn out to be an added benefit as my DTN feed is a lot more accurate than what we get (for free) from ThinkOrSwim, especially once you get into minutes and seconds. What remains now are the scalp signals and that’ll probably take me a few more days.

If you ever have written code for a living then you know how addictive it can be. As strange as it may sound – it’s almost like playing computer games. Once you hit the zone it’s very difficult to pull yourself away for mundane activities like dinner, sleep, or putting up a weekend post. But I forced myself as it, due to last week’s absence, was high time for a long term update (by the way I was willing but the Internet was down in my San Diego Ersatz Den of Doom). I’ll keep this one snappy as I have coding to get back to. 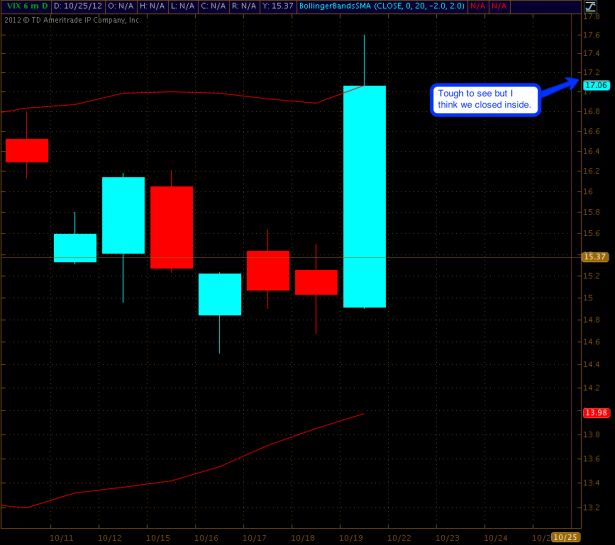 First a few house cleaning items. Some of you may wonde whether or not the VIX triggered a first step into a buy signal (noobs: relative to equities). I had to zoom in quite a bit but it seems to me that we closed a tick or so inside the Bollinger. Quite frankly it’s academic anyway and a more decisive close outside would be needed. This may actually be good for the bears as it will push the BB a bit higher. If we pull back a little early next week then this may actually open the gates for a more extended sell off on the equities side. But not so fast – I do have a few more charts for your consideration below: 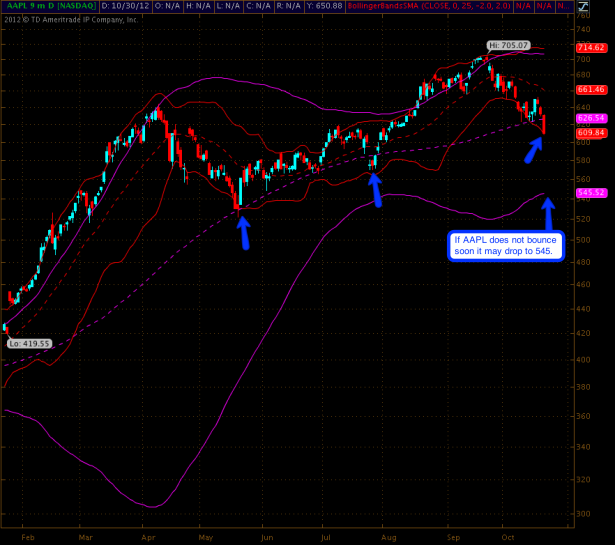 Apple is a major component of the Nasdaq-100 – as a matter of fact it’s a capitalization weighted index:

A capitalization-weighted index, also called a market-value-weighted index, is a stock market index whose components are weighted according to the total market value of their outstanding shares. Every day an individual stock’s price changes and thereby changing a stock index’s value. The impact that individual stock’s price change has on the index is proportional to the company’s overall market value (the share price multiplied by the number of outstanding shares), in a capitalization-weighted index. In other types of indices, different ratios are used.

Where AAPL goes so does the NQ and that in turn will have implicit impact over on the SPX and the less important Dow Jones. What I find interesting right now is that AAPL has breached its 100-day SMA for the second time this year. The last occurrence was swiftly reverted and perhaps that’ll happen this time as well. However, there are signs that suggest caution. On a whim I checked shortsqueeze.com: 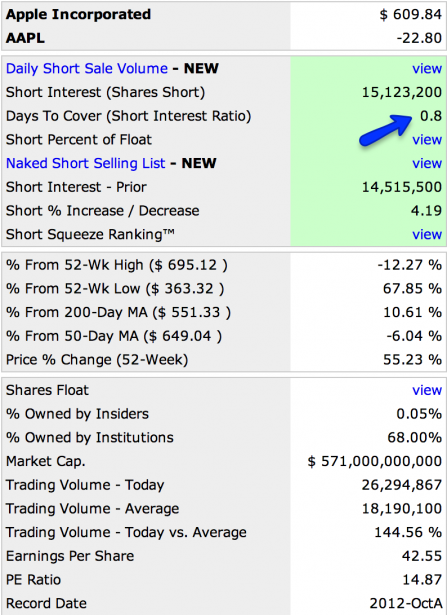 Only 0.8 days to cover all outstanding short positions? After a drop like this? Were are the late comers? Nobody wants to be short this thing? What complacency! This has the perfect makings of a potential long squeeze, so what happens over the next few days should be interesting. If we see a bounce – fine, we probably recover. But if it continues to slip then a pretty nasty long squeeze may ensue.

I agree with Mole on AAPL. In fact, based on the bubble theory, AAPL is on the verge of becoming one of the biggest collapses if it doesn’t reverse over the next three days. I had a bullish target on AAPL (I don’t have a position on AAPL, for the record) above $1000 to keep it in line with all previous bubbles. Now, if AAPL can’t close above $636 on Tuesday, I am afraid that it will be a gap down and run to $550 in just a few daily candles after its earnings release.

I show below the weekly chart of AAPL from 2002 to 2012. Notice that each slope represents one phase of a bubble. Slope 1 is the stealth phase; slope 2 is the awareness phase; slope 3 is the public participation phase; and slope 4 is the manic phase. Slope 2 rises at $0.11027 per calendar day; slope 3 rises at $0.27584 per calendar day; and slope 4 rises at $0.703235 per calendar day. Bullish instruments that exhibit bubble signatures all have steeper and steeper attacks in price (i.e. more and more aggressive), until one day the rise becomes unsustainable. AAPL closed solidly below this trendline on Friday.

I also want to address some of the comments on Friday regarding the trend day alert. Some of you must have been wondering why a “probably not a trend day” turned into one of the best down trend days in recent memory. Let’s go back to my very first post (Trend Trading 101), where I described the setup: 1) significant sized green bar, followed by 2) higher close second bar, followed by 3) lower close third bar (back to approximately where the first bar closed). Let’s examine the bars from October 16 – 18 on both the DJIA and SPX.

Both indices closed above the acceleration line on October 15, and both closed above the 20 day SMA on October 16. The three bar setup starts on October 16. Both were doing fine for all three bars; hence, the expected action on October 19 was a continuation to the upside. However, as soon as the lows of the third bar were taken out on the two respective indices, the expected upside action was eliminated. What had happened was an unexpected move to the downside, and therefore caught most market participants by surprise. We ended up with a down trend day. On days like these, I’d ignore the TDA. If you learn how to trade a failed trend trade setup, it can be quite rewarding, too.

Back to Mole’s work 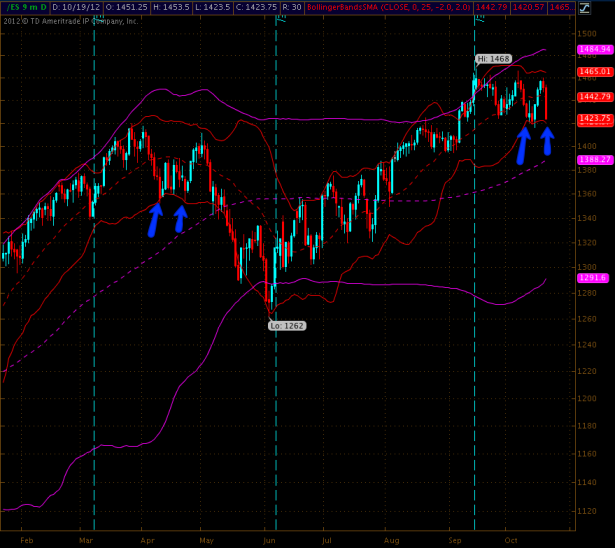 On the daily spoos we are also painting an interesting pattern. That lower 25-day BB has been touched twice in the past month and this is comparable to what happened last April. Back then we got another spike higher followed by an extended sell off. This may just be what we see this time. A spike up ahead of the election and a sell off into the new year. Of course at this point this is pure hyperbole as we have not breached LT support just yet. Even the P&F signals show us a floor nearby: 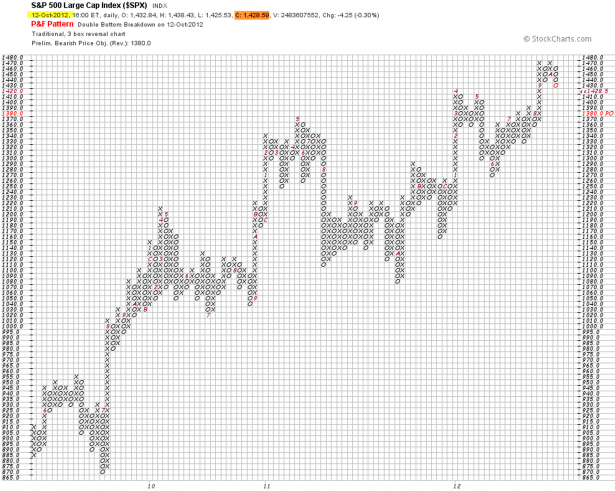 Here’s the bearish signal we got on the 12th on my P&F chart – that double bottom breakout triggered out current 1380 bearish price objective. 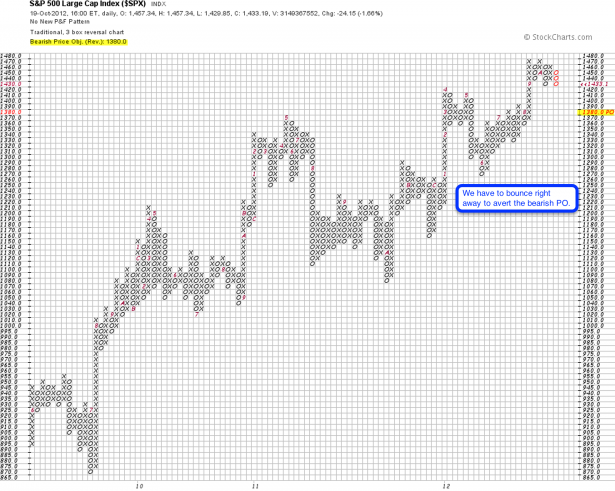 And it’s still in place today of course as we are very near were we were on the 12th. I think a bounce would have to happen here post haste – if we drop lower this week then say hello to 1380 (or worse).
[amprotect=nonmember] More charts and non-biased commentary below for anyone donning a secret decoder ring. If you are interested in becoming a Gold member then don’t waste time and sign up here. And if you are a Zero or Geronimo subscriber it includes access to all Gold posts, so you actually get double the bang for your buck.
[/amprotect] [amprotect=1,13,9,12,5] 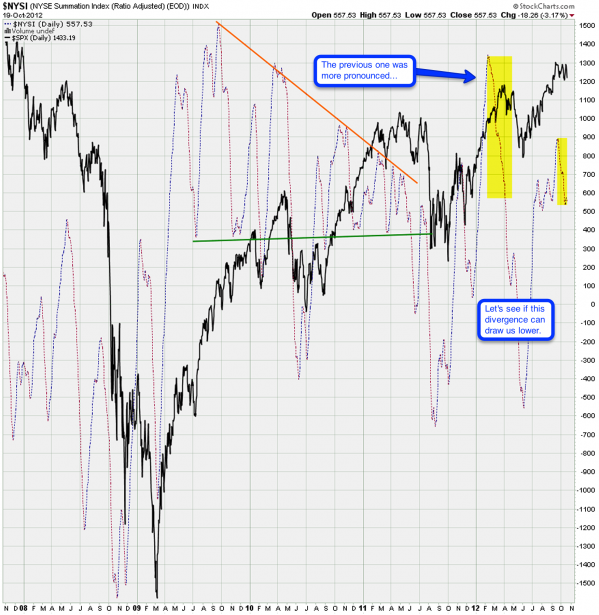 While we’re talking equities let me throw in some momo charts as well. Some of you may be familiar with the NYSE Summation index – it’s an oscillator based on net advances (advancing issues less declining issues). I have been watching this divergence for a while now and it seems to be holding. You never want to jump the gun on those as it’s a very long term oscillator. But the possibility is there – so let’s see if it can drag the market lower over the coming weeks. 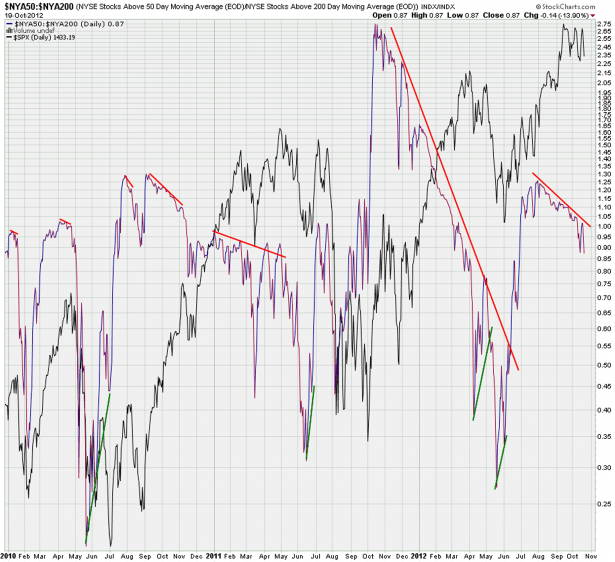 Also worthwhile sharing is my ratio between all stocks above their 50-day SMA and the ones above their 200-day SMA. You could snowboard on that one and it’s rather pronounced. But look at the past few years – for example in late 2010. Similar pattern and we indeed got a drop. But then things continued higher and the bears were in it for another nine months of pain. So let’s not be foolish and wait for LT confirmation. The 1380 target on our current P&F would be a good start. If signals remain bearish after an obligatory correction then we may have something to work with.

Crude is sitting at the edge right now. A slice through this diagonal support line would draw us into its bearish price objective near 77. 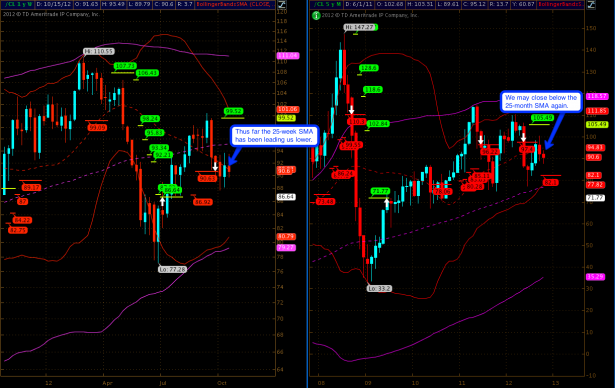 Based on what I’m seeing on the LT interval chart I think 82 would be more realistic as I’m seeing weekly support there. As you can see the 25-week SMA has produced resistance so far. Also the 25-month SMA may be confirmed at the end of this month. We shall see as we have seven more trading days to go before this one closes. 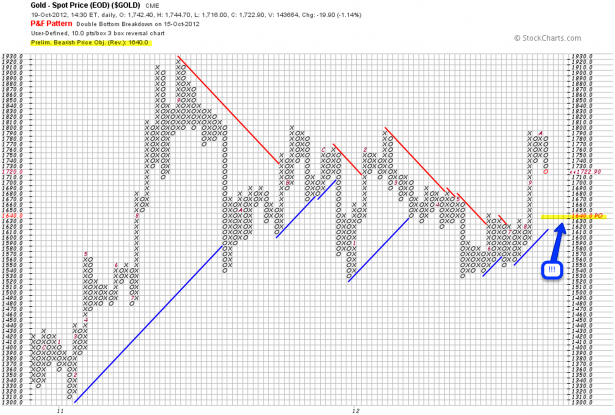 Gold has made a u-turn and is now speeding toward its bearish PO of 1640. 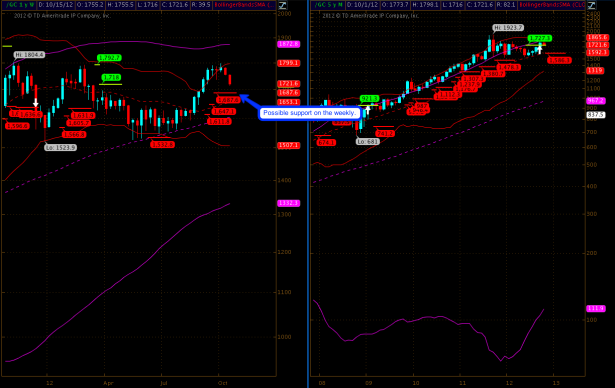 If you’re a shell shocked gold bug then the LT interval chart may be some consolation as it shows us weekly support near 1688. There’s also the 25-month SMA that’s approaching below. 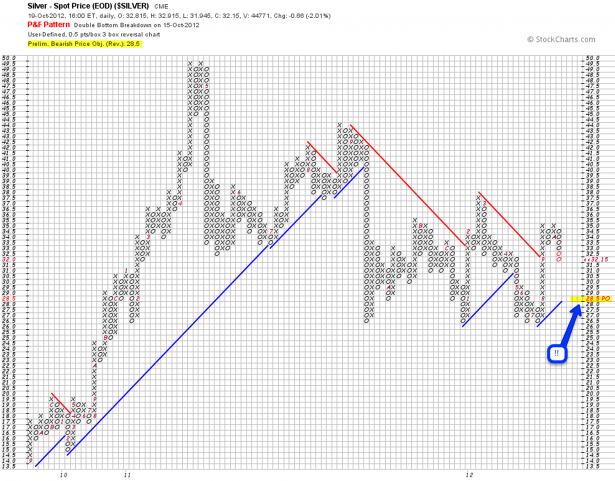 As expected silver is also pushing running downhill fast. Obviously we have now switched to a bearish PO of 28.5. 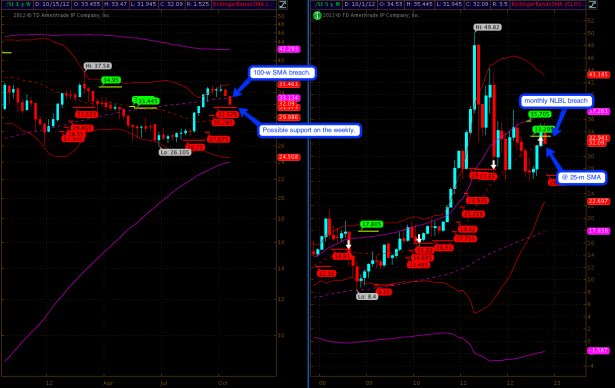 Again, the LT interval chart disagrees a little and shows us support at 31.575. But it also suggests silver being the weaker of the two as we just closed below the 100-week SMA and a monthly NLBL. We are also sitting right on the 25-month SMA and a breach of that one at the end of this month may bestow us with a LT sell signal. Definitely worth keeping an eye on that one if you’re holding precious metals. On the other hand I would not feel comfortable suggesting an exchange into Dollars either right now, not until it shows us some real strength.

Copper – always a good one to round out the big picture. And it’s been week all year, except for a spike higher in early September (you can tell by the number 9 right at the bottom – October is A and December C). Our bearish PO is a more moderate 3.55 and if we breach through diagonal support then I see little to keep that from happening. 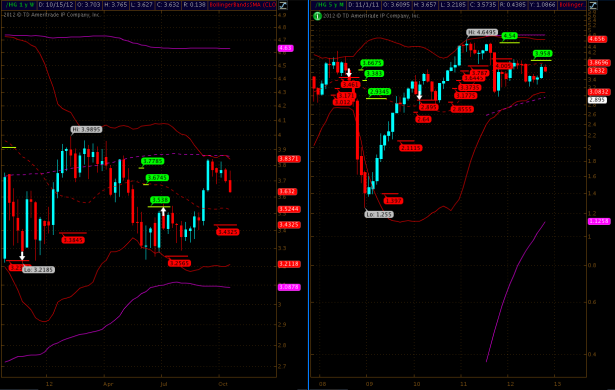 Here’s the LT interval chart – as I suggested there’s nothing on the weekly or monthly panel that would suggest support.

I planned for this one to be snappy but I guess I just can’t help myself. Next week should be interesting – let’s keep it frosty, fun, and of course profitable.