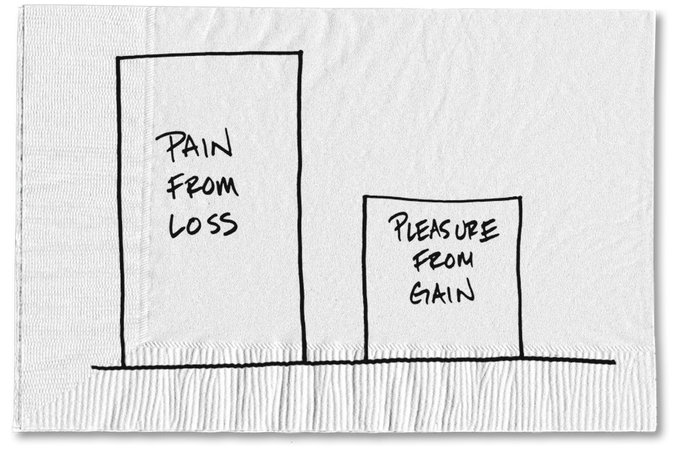 The tendency to treat money that has already been committed or spent as more valuable than money that may be spent or acquired.

Imagine two traders trading the very same stock. One one side we have Mr. Toro who buys 1000 shares of Evil Corp. (ELVC) and on the other side there’s Mr. Grizzle who decides to go short 1000 shares (perhaps he sells it to him). A week later the owner of the company (let’s call him Mole) has a few drinks to many, tweets something politically incorrect, and as a result EVLC drops 10 handles overnight. Which means Mr. Toro just lost $5000 in the process while Mr. Grizzle earned $5000. So all things being equal one would assume that Mr. Toro would kick himself about as much as Mr. Grizzle would laugh all the way to the bank, right?

Actually, it doesn’t quite work out like that, thanks to a phenomenon known as loss aversion. First discovered by Daniel Kahneman and his associates, loss aversion is the human tendency to strongly prefer avoiding a loss to receiving a gain. This particular cognitive bias consistently explains why so many of us make the same irrational decisions over and over, in the process of trading the markets and elsewhere.

Loss aversion explains why despite deciding you’ll hate a movie ten minutes in, you’ll stick it out for the whole two hours in misery. You’ve already paid for the ticket, so you don’t want to waste money by not seeing the movie. But you won’t get that money back if you stay, so why do you feel like you have to? The reason we’re inclined to throw good money after bad (which economists call the sunk cost fallacy) is a perfect example of loss aversion in action. If we’ve spent resources on something—whether it’s as small as a ticket to a bad movie or as large as the billions of dollars spent in a war or social program that’s not working out—we’re inclined to stay the course so as not to waste what we’ve already spent. In other words, we want to avoid feeling the loss of what’s been spent, so we stick with our plan, hoping for a gain, even when sometimes that just leads to a bigger loss in the long run.

Why are we so averse to loss? Like many cognitive biases, it conferred a big evolutionary advantage. All organisms survive by maximizing opportunities and minimizing threats. Because a loss of precious resources reads as a threat to our very survival, we’re hardwired to try to hold on to what we have. In the terms of natural selection, it makes sense to try to avoid loss at all costs. But, of course, our ancestors didn’t have to contend with the many complicated economic problems we find ourselves with now, which is why the loss aversion that helped us in the past often hurts us today.