Good morning my intrepid ratlings – I just took a stroll through my morning chart routine and what I see are mixed messages galore. Let’s forget about those insane equity traders for a moment and mosey over to the Dollar: 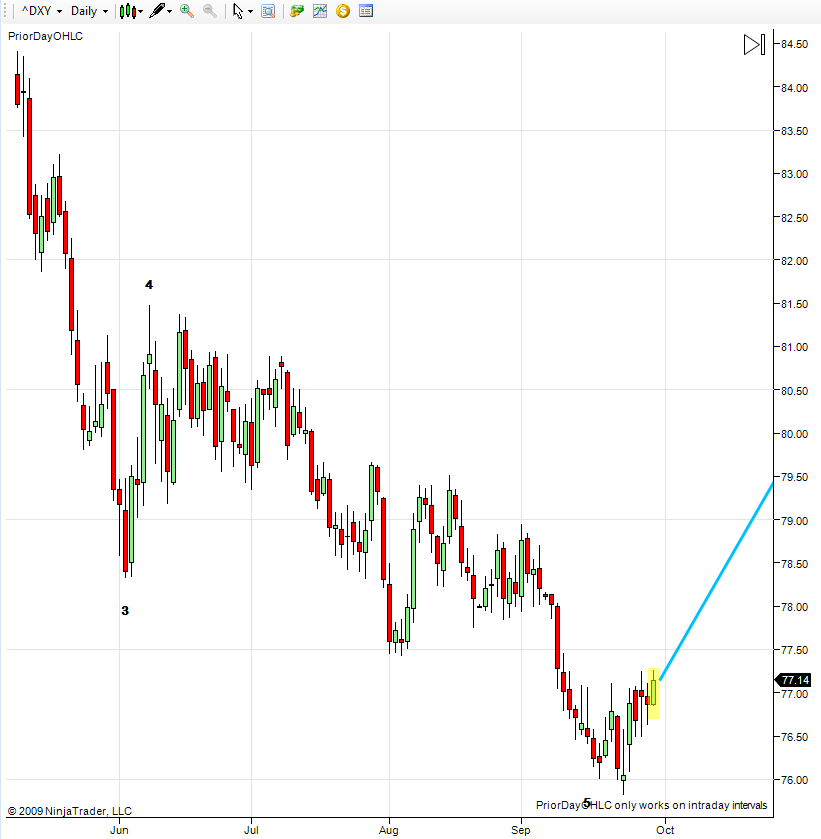 It’s still fighting for it’s life but thus far I’m seeing a slow grind to the upside – it’s holding its ground, which it should considering that Investor Intelligence readings are registering at 3% Dollar bulls. 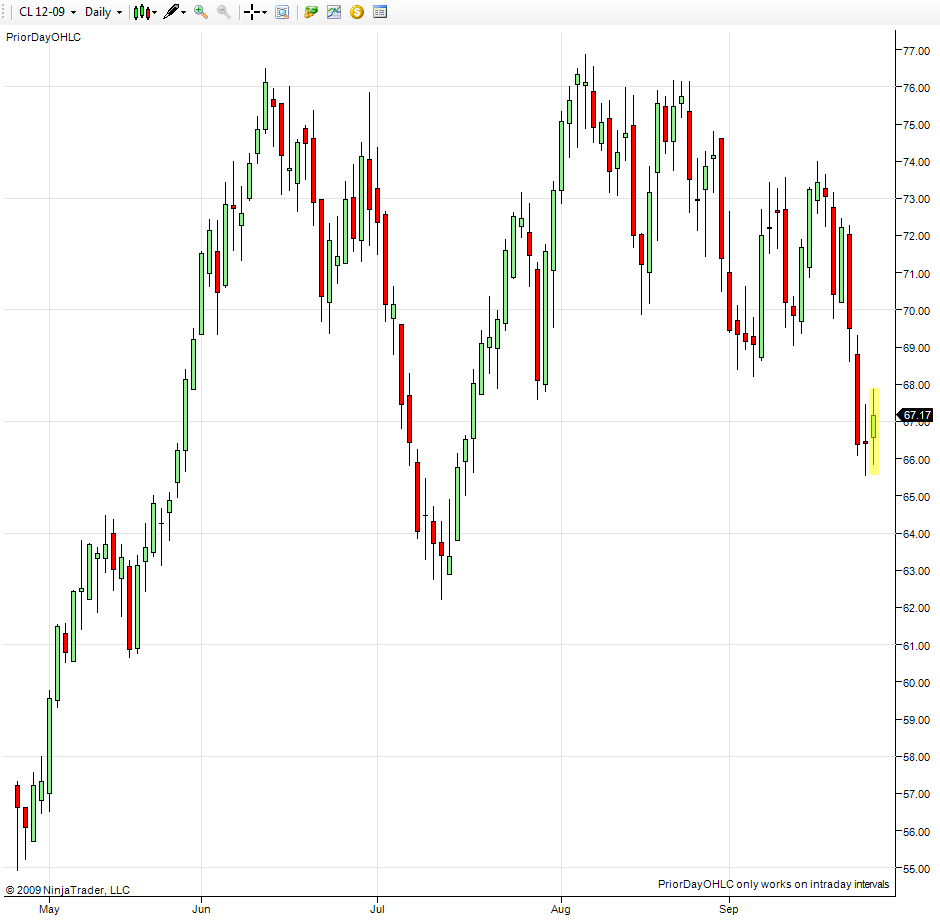 Everyone still despises the Dollar, but crude is still unable to catch a bid – yesterday’s doji might however spell the beginnings of a short term swing up – we shall see. I have not been counting waves on this thing but it seems to me that we painting some kind of triangle, so expect yourself for a few more gyrations before it picks a direction. Medium term we might wee 73 on this thing, then 68, and then possibly 80. 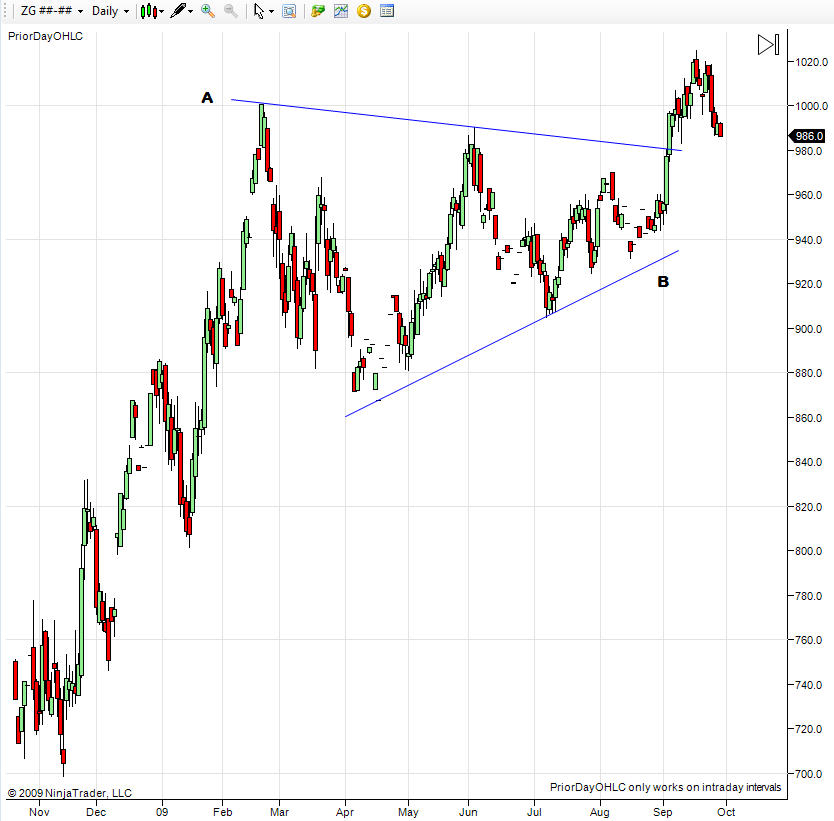 Gold seems to have topped – and it’s curious that it seems to have painted a similar pattern as I expect in the works for crude. Unless we breach 940 however pretty much anything can happen however, so let’s not get complacent – the counts in gold remain a bit difficult. And of course note that gold is dropping while crude is pushing upward a little this morning – interesting. But it actually confirms what I have been preaching for over a year now – correlations are ephemeral – they hold for a while and as soon as you bet real money on them they fall apart. 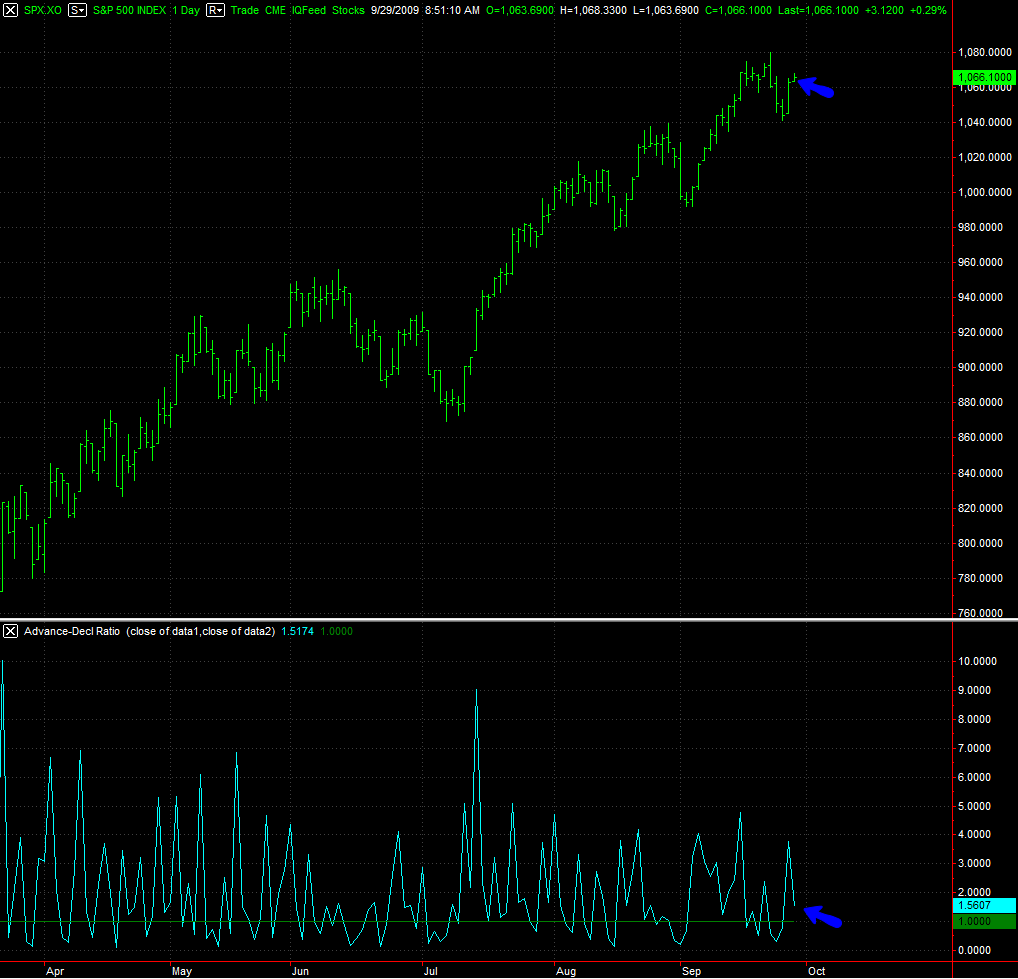 And here’s an interesting little gem for this morning – the NYSE A/D ratio. So, we break yesterday’s highs today but meanwhile the A/D ratio is dropping hard? Now, for the record – I am only using this as a complementary market sentiment indicator. Also note that the TRIN (i.e Arms index) is calculated by dividing the A/D issues ratio by the A/D Volume ratio. So what’s the TRIN right now? Dropping towards a bullish 0.55 while yesterday it closed around 0.8. 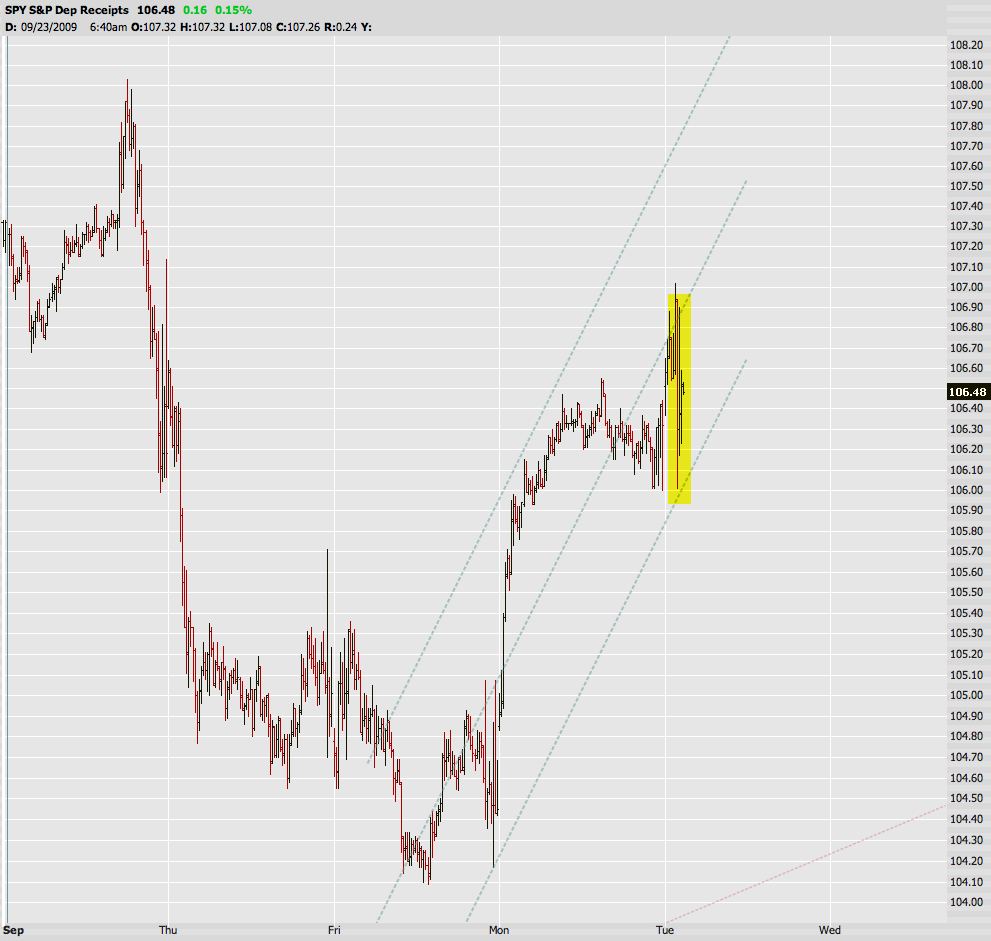 Meanwhile those crazy equities are painting some wild swings this morning – seems like I’m not the only one who’s confused. But let’s not fool ourselves – we all know where this is going. In the past few months – whenever the tape looked completely fragmented and out of kilter the eventual path was to the upside. As you all know I’m as short as a midget in a limbo contest but that’s a long term stance. Short term I think that we need to keep expecting highe highs unless the market proves to us that it can take us longer. And that, my dear ratlings – has not yet happened. None of the fancy bearish thresholds I pointed out yesterday has so much as being touched – so right now all we have are hopes and dreams while the market continues to disappoint, discourage, and slaughter one bear after the other.

Now, just for the record – I am not bullish to say the least – quite on the contrary. I would love to tell you rats that it’s down down down from hereon – but although I do see divergences all over the place (which we have been seeing off and on for weeks now) after seven continuous months of pain the bears need to make a stand and finally prove that they can take the tape beyond the bulls comfort level. Which has not happened since February of this year. I still have not seen any panic selling – I have not seen any pain for those mouthbreathers – it’s been one long love fest for them. Irrational exuberance continues irrespective of extremely overbought conditions in equities and horrid news stacking up on the economic front. And we all know what’s coming, or do I have to remind you of that mortgage reset chart I posted a few weeks ago?

But in the end – unless we see the tape go our direction – we have nothing. And that is the attitude you need to assume going forward. Either you trade the swings on a short/medium term basis – if that’s your style – and in that case make sure you read the tape accordingly and are there to trade those swings. Or, if your trading window is more long term – expect more pain and losses before your short positions start paying off. If things start gyrating into November and perhaps December be prepared to exchange your March puts for Junes as theta burn will start catching up with you if we don’t see a turn before January 2010.

10:36am EDT: POMO is currently being held – we all know what that means. A nice sell off after a spike this morning – now followed by some VWAP churn – and with the inevitable spike to the upside before EOD. Be prepared.

Of course I have mixed feelings about all that ‘audit the fed’ talk. First up, it’ll probably never happen – and secondly – as strange as this might sound it’s not helping our cause. You see all this ‘stretching’ of the tape we’ve seen in equities happens because the Fed is under increasing pressure from Congress, with the Audit the Fed Bill (excellent idea!) receiving support from two-thirds of U.S. House of Representatives members. So Helicopter Ben is doing whatever he can to deflect the pressure – and one way of doing that is to make everyone happy by pushing the tape higher – no matter what.

So, I would appreciate if they would either keep their mouth shut or finally vote to actually audit those pirates – because if they do the tape will come crashing down (and they know that which is why it won’t happen IMNSHO).