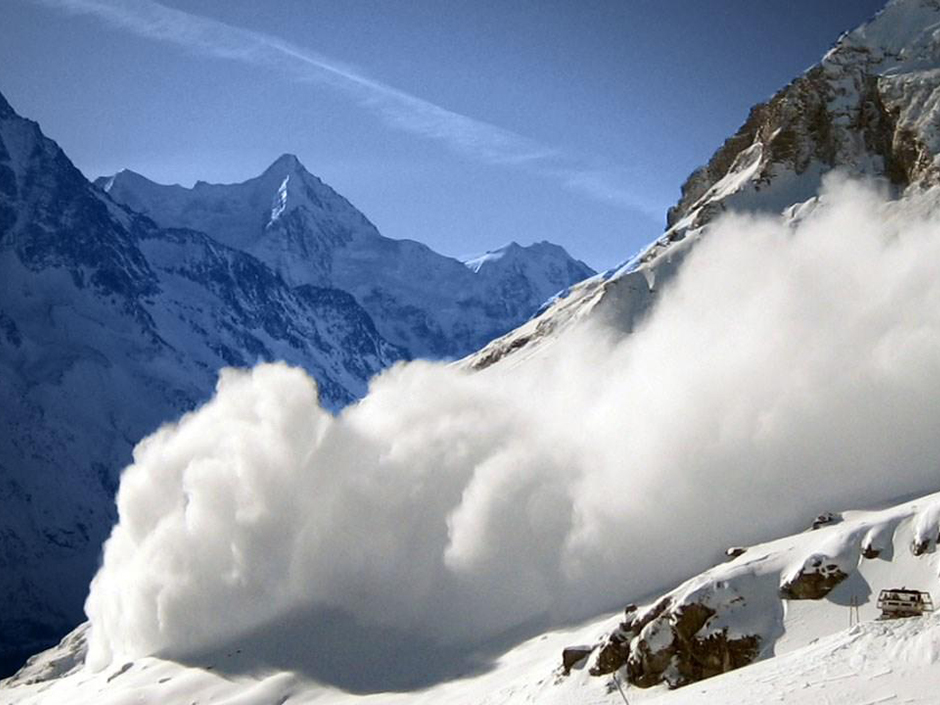 Daylight saving time ended yesterday over here in Europe and it may actually have been the last time. Back in August the European Council declared the practice antiquated and recommended that member states stop changing their clocks in spring and autumn. However at the same time they left it up to the respective EU state and I’m pretty sure that, true to form as always, Spain is going to make a royal mess of it.

For me personally this does have a small impact on my daily routine as I would have one hour less each morning to prepare my daily posts. Which for me of course happens in the early afternoon just before heading out to the gym. It’s a daily routine that I have enjoyed quite a bit since I moved over here as I’m a late riser and love to work into the late evenings.

So if the U.S. sticks with DST and Spain abandons it next spring then I will have to post one hour earlier each day. Not a big deal and truth be told we are already considering moving back to the U.S. sometime in 2019. It’s not going to be California however for various reasons, most of them economic and some related to retaining our sanity. 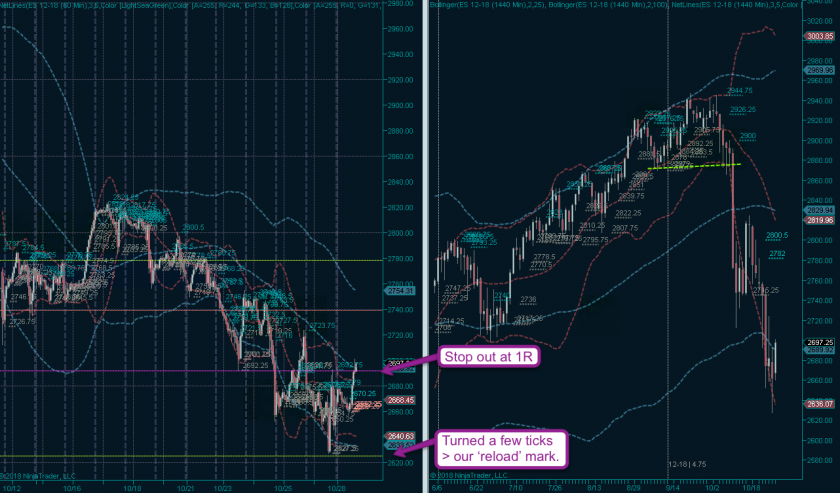 Alright let’s talk equities plus I have an updated momo update for you guys.  I actually got quite lucky over the past few hours as my ‘reload’ mark was almost touched which as you remember would have been the point where I had accumulated additional short exposure.

Fortunately the tape turned a few ticks before reaching it and then proceeded to snap higher, in the end stopping me out at the 1R profit mark. Yes, nothing to really write home about but as I keep telling you guys, trading the fast and quick on the way down isn’t as glorious, and usually less profitable, as it’s made out to be. You roll with the swings as well possible but reversal spikes are usually fast and violent. 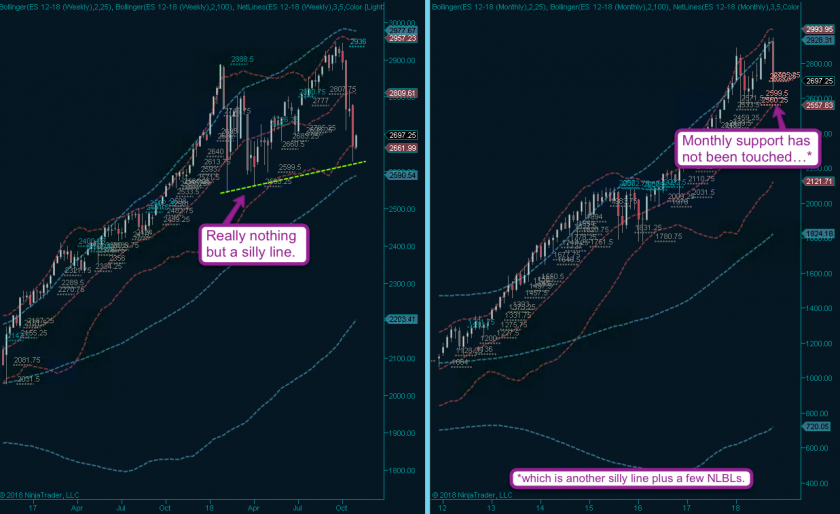 Long term we are still in the middle of nowhere. Those moving averages on my chart have little meaning as they haven’t been touched for ages. And the silly lines I’m drawing are mere possibilities with a very low chance of having any veracity. We simply need to see price start breaking the series of lower highs and lower lows that it has kept on painting over the past week. 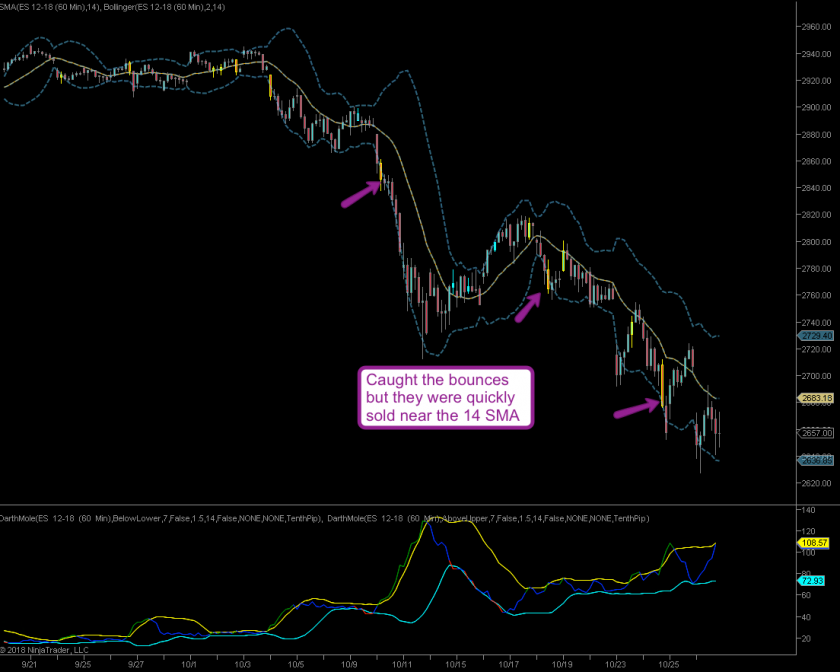 I think you will find this updated realized volatility chart interesting. As you can see the predicted bounces did happen but all failed at the SMA-14 that I’ve added to this chart. If you remember I am using this one for swing trading signals in more civilized market periods, but over the past week they have all been reversed within a matter of hours. 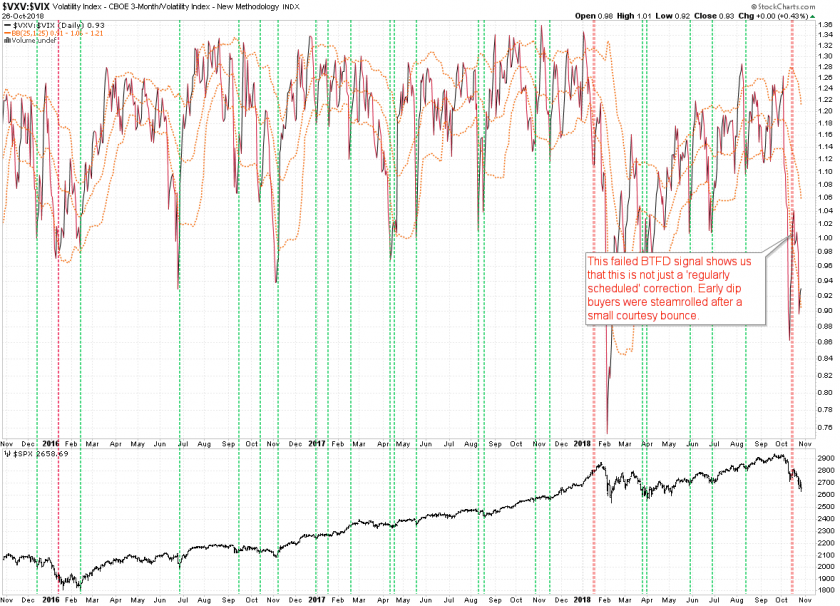 Okay, so let’s do some market momo. The IVTS shows us a failure last week which is not a very common occurrence. And as noted on my chart failed BTFD signals on this chart show us that this is probably not just a ‘regularly scheduled’ correction. Early dip buyers were completely steamrolled after what turned out to be nothing but a courtesy bounce.

More momo goodies are waiting below the fold: