It’s been a rather interesting day on my end. After practicing martial arts for some twenty years I finally got my nose broken for the first time during sparring today. My instructor actually reset it on the spot and although I needed some stitches afterward the doctor said my nose should make a full recovery. 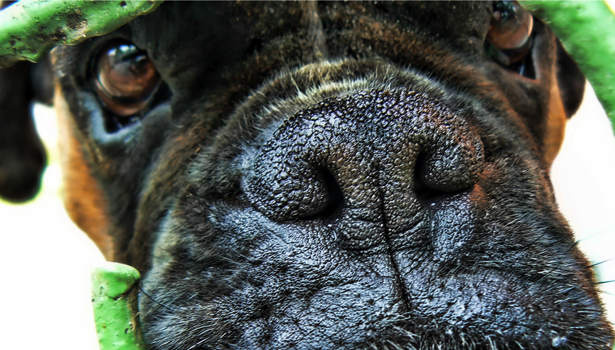 I know – couldn’t have happened to a nicer guy, right? 😉

Anyway, after stitching me up the doc also administered a tetanus shot and although there’s almost no pain I’m starting to feel a bit banged up tonight. So forgive me if I just do a really quick one tonight and then get some rest (update – of course that didn’t happen – plenty of goodies below).

Spoos – nice little pop on the books right now but it reversed right where it should have. Mark that line in the sand on your end if you are bullish – this should not drop any further than the current lows which coincide with my 100-hour SMA. 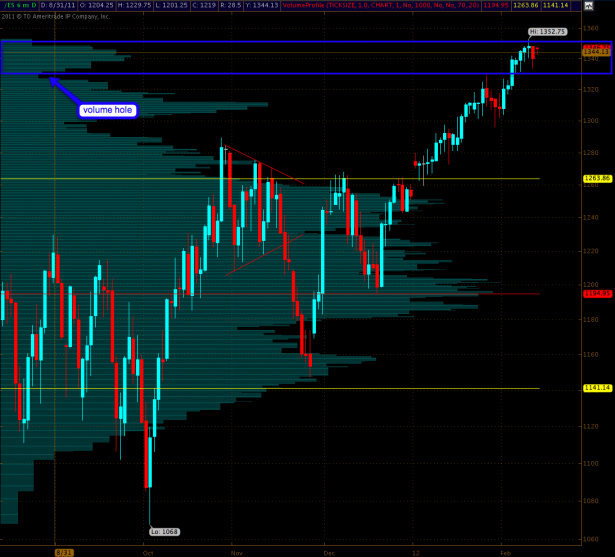 The volume profile on the spoos has changed quite a bit a lot could happen between 1330 and 1360 – tough to make a call inside here. BUT watch that volume hole near 1330 – if we drop below that then I think the bears may just take this all the way and we get a real correction for a change. 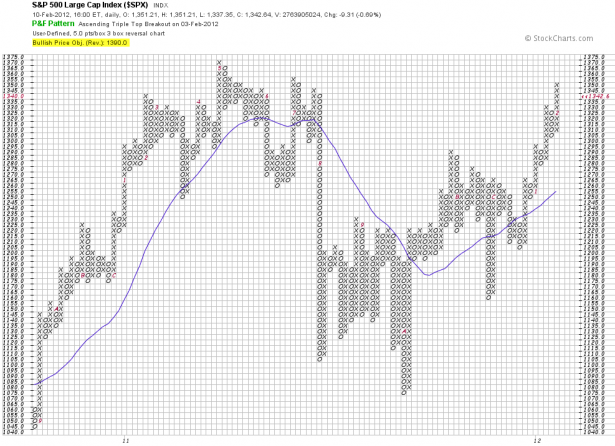 Alright – we all know sentiment is ridiculously bullish right now – even after Friday’s little wipeout. But I am not sure that we are looking at a major reversal – juuuust YET. If we power higher and get an opening SPX gap tomorrow morning then we’ll have to monitor the action carefully. I told you on Friday that the bulls are not out of the woodworks just yet – we still may see an inside candle or (even better) a RTV sell setup. Of course once we breach last week’s highs we’re off to the races. The next hurdle on the map would be the 1370 mark I posted about last week.

Quite a few more charts below for the subs – that’s right – a broken noggin’ won’t stop the Mole! 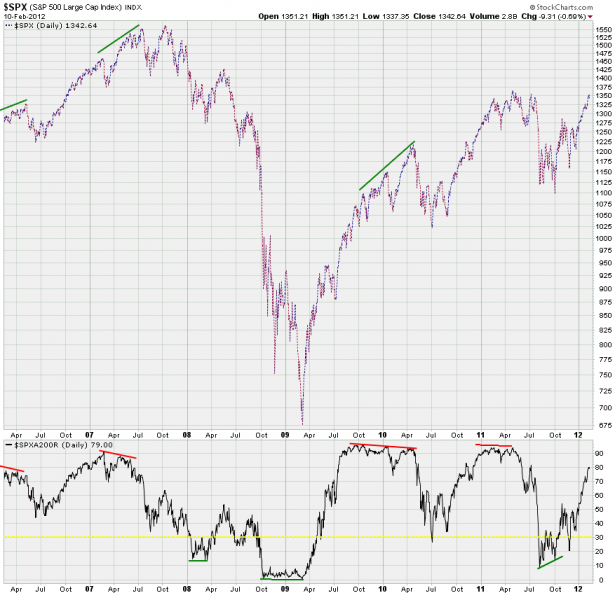 SPXA200R – it’s climbing and a reversal here is a possibility. However, it’s a lot less extreme than what we got ahead of previous major corrections in the past three years. So my point here is that despite all that extreme bullishness I don’t see the type of conditions that would lead me to taking on medium to long term short positions. 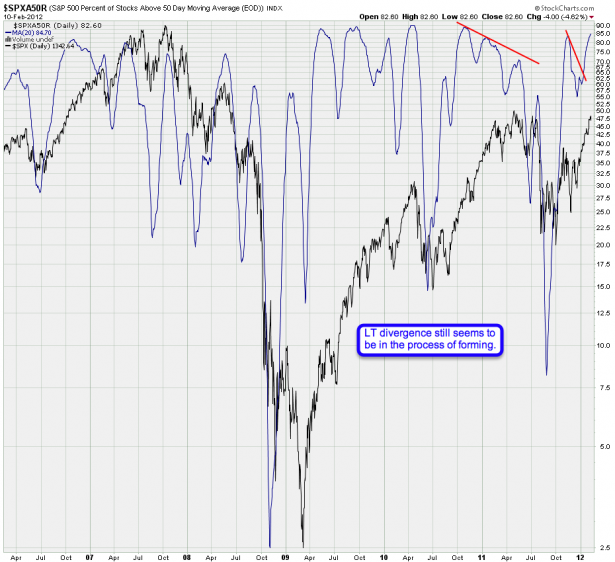 Same on my MA on the SPXA50R – I do like the current readings but I would prefer a more extended divergence. I know this is not what you guys want to hear but: we could turn here but it’s possible that this thing drags out quite a bit more. Remember trend traders and overbought markets? 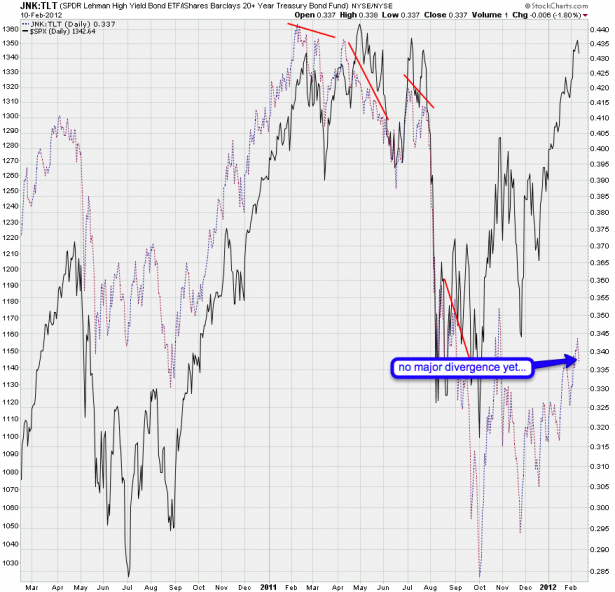 Same story on the JNK:TLT ratio – it took a hit on Friday but I don’t see a clear divergence just yet. 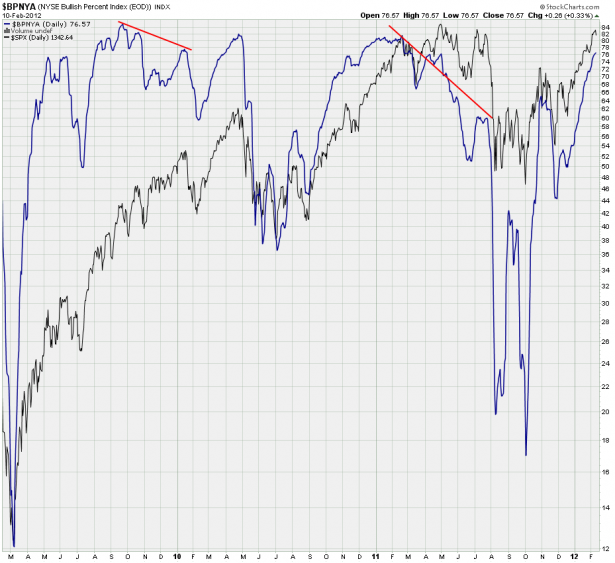 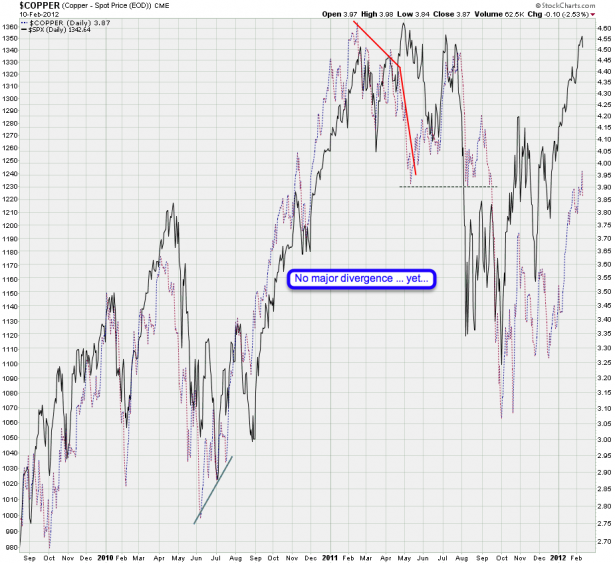 Copper – not major divergence … yet… 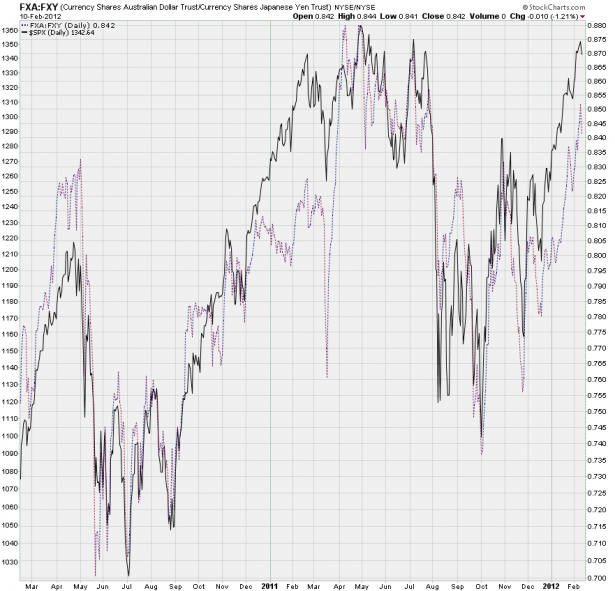 AUD/JPY (via FXA:FXY) long term: NO divergence just yet. Admittedly this one does not always produce one. 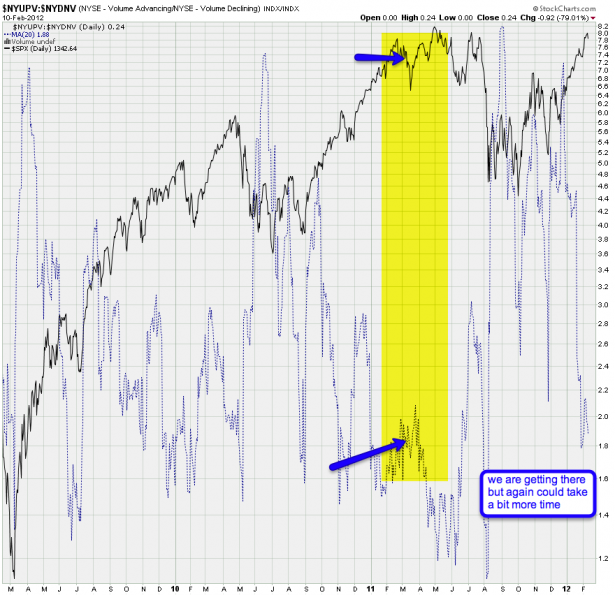 Here’s the NYSE adv/decl volume ratio. It’s where we could see a slide but in the past we usually saw one more pop higher, which supports the evil scenario I pointed out in Friday’s post. 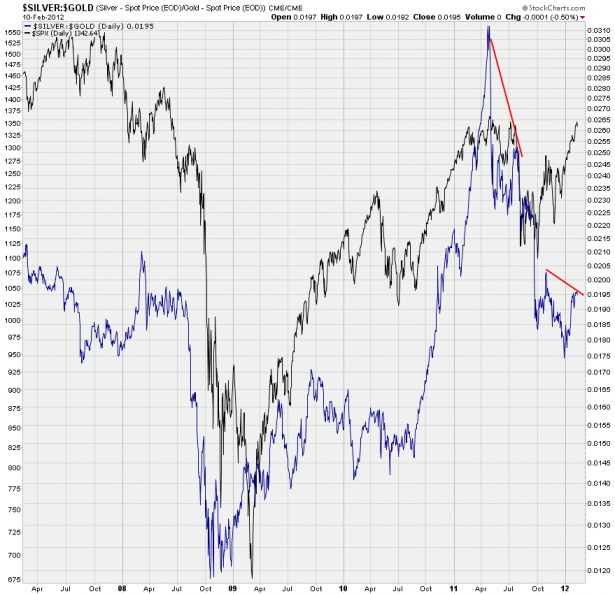 Silver:Gold ratio vs. SPX. Well, it could be spot on – this one seemingly disagrees with the prior charts. The readings don’t seem to matter much (based on prior observation), what matters apparently are distinct divergences. So, this one leaves the door open for a plunge right now. 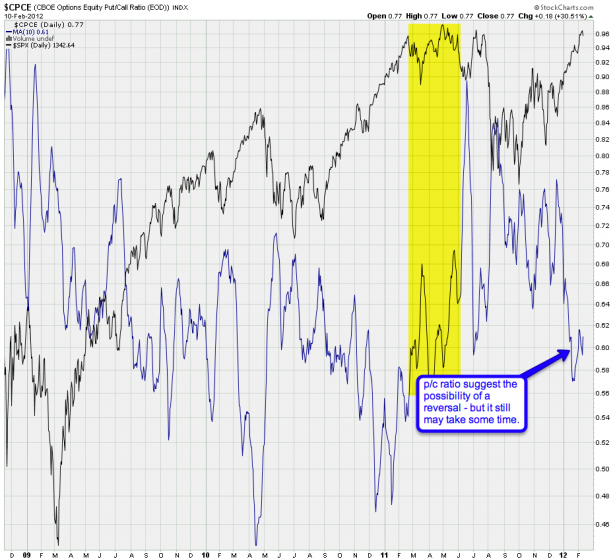 Similar story on the put/call ratio – it’s possible we slide from here but I would feel more confident about the downside if we pushed higher one more time and then produced any divergences. Wishful thinking on my part? If you interpret the chart differently please let me know. 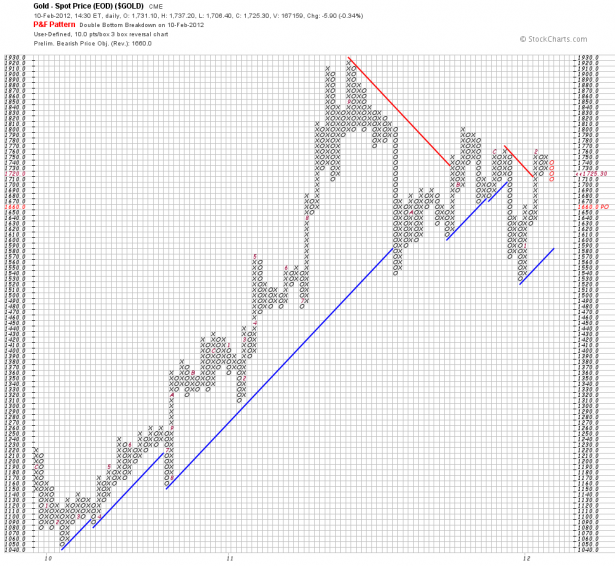 Gold – that P&F chart suggests a failed break out attempt right now. Which is surprising as gold looked very bullish until now. This may change next week and I wouldn’t take the bearish PO seriously just yet. IF we get a high pole reversal warning, then we should pay attention.

Bottom Line: The door is open for the bears to take this thing lower right now. If you are bearish then your first line in the sand should be last week’s highs at 1352.75 – after that the bulls only got 1370 to worry about. I am not in the bearish camp just yet – yes, despite insane sentiment and I am definitely cognitive of Volar’s most excellent sentiment charts. Price/momentum however needs to confirm that and unless we test last week’s lows again I will remain in a wait and see loop for now.
[/amprotect]