Leonidas I, king of Sparta, who, when a neighbor state needed military aid, would send one man.

When catching up with this afternoon’s comments over here as well as on the Slope I sense two very distinct sentiments:

Confusion is the easy one as it’s natural to be a bit puzzled after today’s tape. Technically speaking it’s not really an ’emotion’ – more of a state of mind. If at the end of 2008 you thought to yourself you’ve seen it all – well – the market just proved you wrong. The past month has been simply horrid and many traders out there have paid their dues. If you were spared one day you probably got hit the next. To lose your orientation, your bearings, is a very scary thing – in life and especially in trading.

Which brings us to fear. It has cost the careers of a many traders as it hits you out of nowhere and leads into making decisions you would not consider in your wildest dreams when you are of rational mind. Fear makes us choke up and dispense with carefully crafted plans to seek shelter and to make the pain stop. It’s what market makers feed on – it’s like an elixir to them. The more panicky, frustrated, and afraid investors are the more money they make. I call it the dark force of trading as it brings out the worst in some traders and the best in others.

One trait I always admired when trading alongside Berk was that he was absolutely fearless when it comes to taking losses. Sometimes that backfired for him, but more often than not he proved to be right in the end. No matter how much the market moved against him he was able to pull the trigger at the top – buying when others were heading for the hills.

Some people are more cold blooded than others and you cannot fool yourself. If you’re Mr. Iceman then you’ll smile through draw-downs but no matter how many Zen meditation classes you take, if you’re sweating when the losses start to accumulate you better always have an extra shirt ready.

The difference is how we deal with our fear – no matter how much of it grips us. The way I harness my own fear is to re-evaluate my approach constantly and put myself into the shoes of the other side. If I was a bull – how far would I drive this market up right now? What is the one level that breaches the pain threshold of the majority of the bears? For some reason I am able to call the market’s gyrations fairly well, but trading it often is another story – maybe I re-hedged too early today – maybe it was the right thing to do. Doubt sets in, which needs to be overcome. A lot can happen during the heat of the trading day and if you find yourself looking forward to the closing bell then it’s probably time to step back and give yourself a break.

What I did this afternoon was – nothing. I actually sat down and watched an old movie I had on my Tivo for quite a while now. Not sure if you guys have seen it – The Legend of Bagger Vance – Jack Lemon’s last movie btw. Anyway – when I came back all it took was one look at my charts to make sense of it all. Who knows why – all day I was seeing a lot of valuable things – but the big picture was right there, staring me in the face. So, I started to draw lines and suddenly everything was lining up just fine.

Tonight I’m going to send you only one single chart – just like Leonidas –  which is all you need to see: 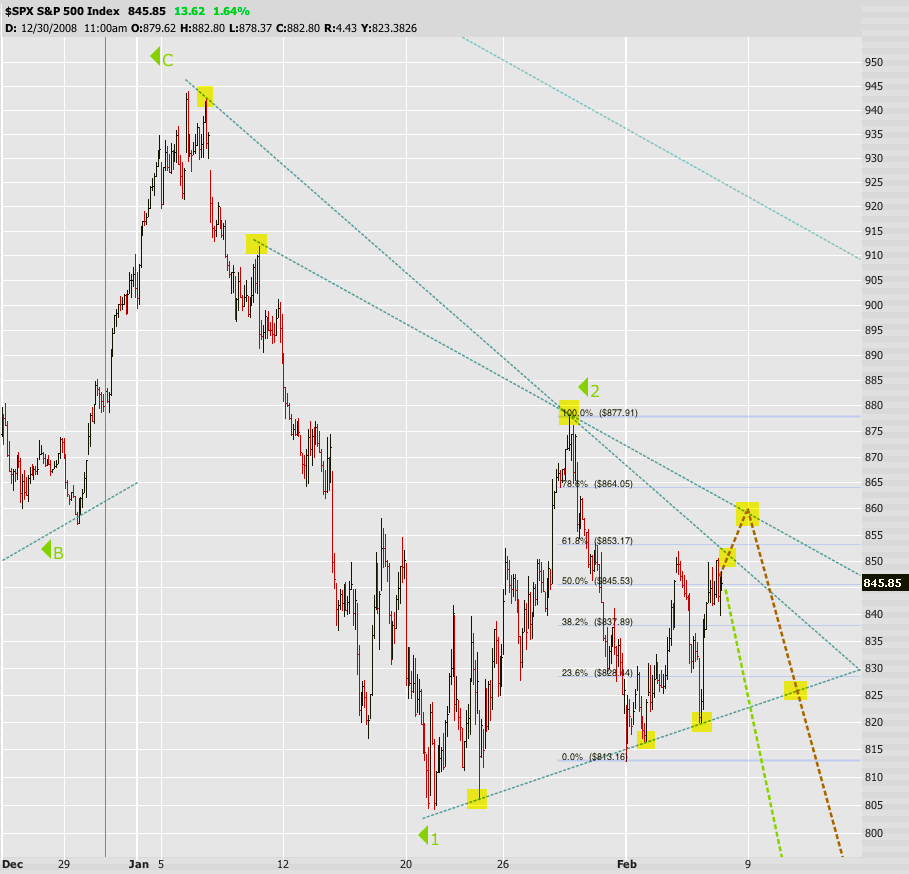 I’m not going to talk about the damn wave count tonight – someone said that I have changed it multiple times (not true – I only offered three scenarios for the past weeks which I was narrowing down). I think it’s very obvious how it all connects and we need to do. No matter where we go tomorrow I think the lines you see (and the highlights) can offer you very reasonable and real action items.

See? Feeling better now? Got your bearings back? My plan is to start un-hedging tomorrow morning no matter which way we go. If we breach 865 (the 78.6% fib) then I will simply take a step back and re-evaluate the situation. Done.