We’ve quickly gone from ‘what the heck do I say about this market’ to ‘crickey, where do I start’? Let’s first peek at our spoos treasure map which shows us the setup and purported resolution of the symmetrical triangle formation: 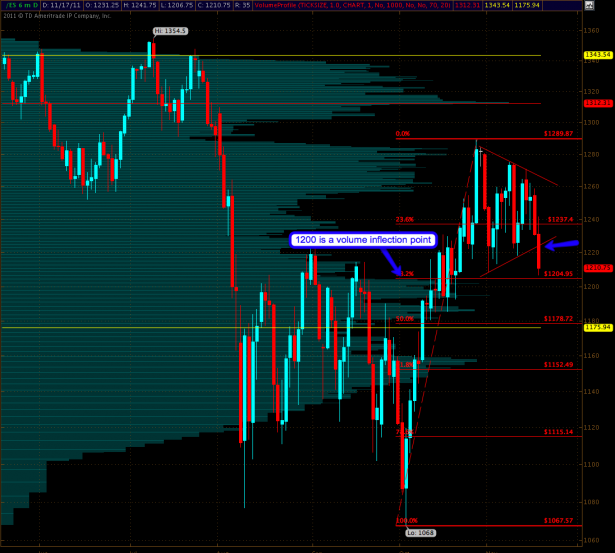 We finally got a breach today and I’m sure the bears are salivating with expectations of impending doom. Now, I’m not saying they are necessarily wrong as this tape certainly opens the door for more downside. But I am also saying that nothing ever happens the way you’d expect it to happen – it rarely does. If the tape would take the one way elevator down then it would have happened today. Especially given the volume profile shown in this chart – there’s tons of it right below 1200 – so why aren’t we there or much further below yet?

The 1200 mark actually turns out to be an immensely important support cluster plus it has psychological significance. I will cover this in more detail further below and also have additional perspectives as to what may lie ahead. 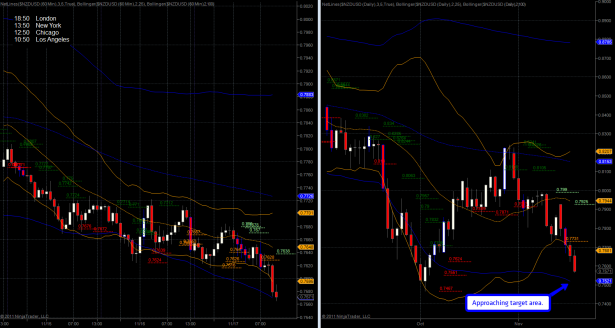 But first let’s talk FX – the NZD/USD was one of the setups presented recently and it’s resolving nicely. So much so that it’s approaching our target area of 0.752 – thus I would start scaling out of positions here as a bounce may be on the horizon. 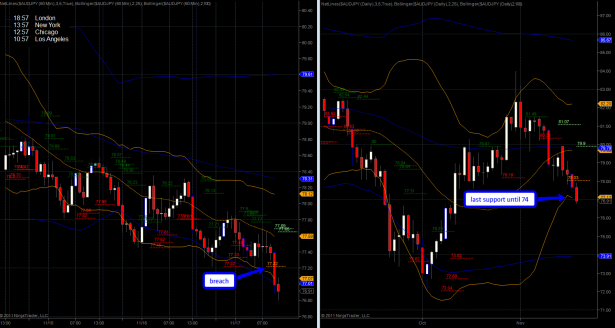 AUD/JPY called uncle at 77.99, dropped lower, tried to fake us out, and then proceeded lower to breach the daily NLSL at 78.03 yesterday. The only issue with the downside has been that T1 is really nearby and that we already touched it today. Profits are profits – that’s fine – but what we are really concerned with right now is whether or not that lower 25-day BB line is going to decide to be difficult. The hourly shows us nothing to hang our hat on so I would probably lighten up and set a stop near b/e for the remainder of my positions.

Of course the AUD/JPY is also a good representation of what’s happening on the equities side and there’s pertinent chart waiting for you subs further below. 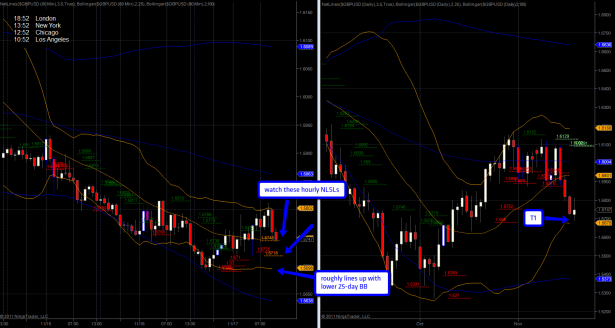 Cable – also presented here a few days ago is now bouncing at the lower 25-day BB. Yet I am not convinced that it is done with the downside just yet. I think we are a bit in limbo here until we either breach below the 25-hour SMA and that cluster of hourly NLSLs looming below or it’s pushing above today’s highs where we also see an hourly NLBL at 1.5812. It’s a tough choice to make and perhaps the right decision is to lighten up here a little, set your stop, and to keep a few lottery tickets for a ride to T2 which would be near 1.54. 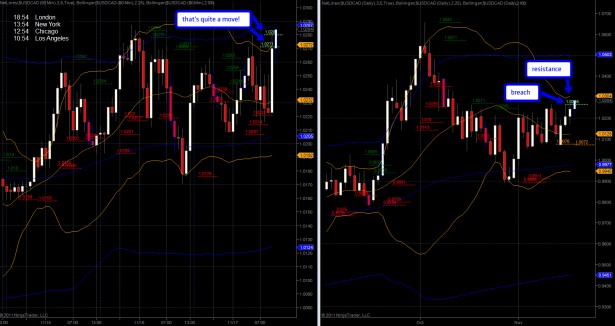 USD/CAD – the third setup presented here recently could go either way and third time may be a charm for that daily 1.0266 NLBL. However, there is a bit resistance looming above in the form of the upper 25-day BB line. The hourly shows us a NLBL at 1.028 being breached but with resistance looming above via the 100-hour upper BB line. Now, which way this resolves I frankly don’t care – all I know is that being short here is a reasonable setup until your stop above all that resistance is being touched – at that point we seem to be destined for a ride into 1.05 as there’s nothing but air above.

Alright, there’s more below for my intrepid subs – please step into my evil lair:
[amprotect=nonmember] More charts and cynical commentary below for anyone donning a secret decoder ring. If you are interested in becoming a Gold member then don’t waste time and sign up here. And if you are a Zero or Geronimo subscriber it includes access to all Gold posts, so you actually get double the bang for your buck.
[/amprotect] [amprotect=1,13,9,12,5] 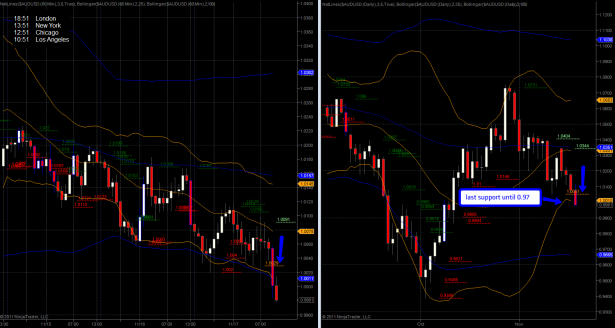 Completing our FX theme is the AUD/USD, which is in a very similar configuration as the AUD/JPY. I didn’t show this one the other day but as the setup is identical you may want to play both. Again, that lower 25-day BB line is the line of last support here – if that one gives say hello to 0.97.

Looking very similar to our FX theme is actually the S&P E-Mini – as you can we are in the process of breaching the daily NLSL at 1218.25 – which of course may or may not happen. If we push back above by the bell then that would give the bulls a platform to build some support here and they better as the LT charts are starting to look butt ugly:

We are now near the 100-week SMA which happens to point almost exactly to the 1200 mark – at the same time both the 100-month and 25-month SMAs are converging near 1200 as well. Now, if that’s not good for buyers to stage a defensive then I don’t know what is. And for us it represents the bulls’ Maginot line – which if breached will lead us all the way to Paris. And that means at least 1158 on the weekly, but after bounce most likely 1100 as shown on the weekly or even the 1000 mark on the monthly.

All that can be avoided by holding the 1200 mark and preferably today’s lows. Now also consider the volume profile shown in my first chart – it’s clear that things should accelerate should we drop below and equities could become unhinged for a few days. Seasonally this is not the time for big market corrections and volatility also seems to be pointing toward at least a short term bounce here: 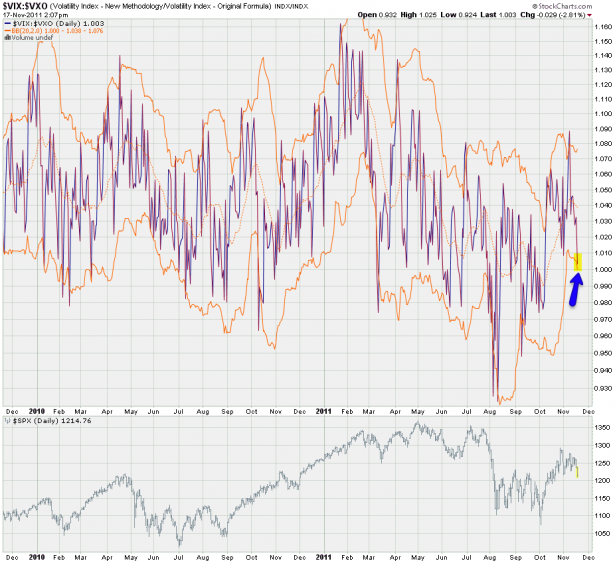 You may recall my VIX/VXO chart – and it’s now scraping the lower BB band, which means that we may be looking at selling exhaustion here. 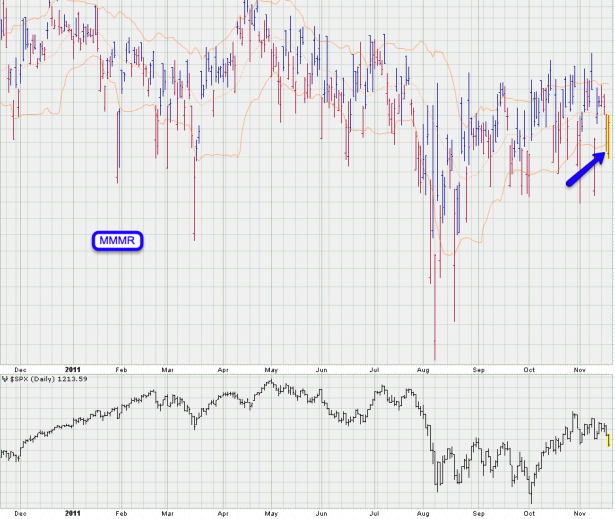 My mysterious market maker mind reader appears to agree. Could we drop a bit lower from here – of course we could – nothing is ever impossible but if we do then we are talking at least a mini market dislocation. 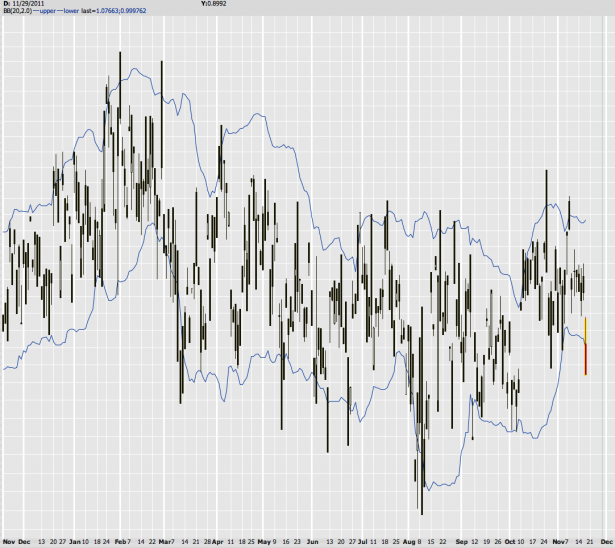 Here’s MMMR2 – something new I cooked up recently. Also pointing toward the possibility of a bounce here.

If we drop lower from here it’ll probably be pretty explosive and most retail traders will be thrown off the train. If you want to play the downside, that’s fine as long as it’s funny money (i.e. a small percentage of your assets you can afford to lose). Please do not bet a significant chunk of your assets on a crash. I know it’s tempting but more of a gamble than a trading opportunity. If you want to gamble then head to Vegas – at least there you have hot chicks and ample of booze.

And if you are playing options also remember that volatility spiked almost 6% today and that you don’t want to be vega squeezed if the bulls decide to step in here. If you don’t know what I’m talking about then don’t play options in this type of tape!

In terms of seasonality the bulls still may turn this turd around and squeeze the bears one last time this year for good measure. I think the charts presented above show important inflection points that would stomp on seasonality and give the grizzlies are holiday season to remember. But as so often when it comes to trading the markets a few ticks can make a world of difference, so don’t be overeager with the downside just because things are looking bearish right now today. Track the support levels shown above and structure your trades accordingly.

Most importantly – don’t take sides. Bullish/bearish – we are not talking religion here and all that matters is that you remain on the right side of the tape – which is always the profitable side.