Some Sentiment, Some Stats, And Some Energy Spreads

This is volar with a quant and sentiment update. That being said, I did something different today- I added some “fundamental” data on the bottom. I did this- not for trading, but bc the news is lame, CNBC is full of retards and koolaid, and frankly its nice to hear sound thoughts- even if its my own voice. I understand most of this may seem like it does not go together (sory in advance per the 20 charts)- but we are talking markets and what else do you have to do this weekend? Beer and free data- sheesh I might read my own post- jk.

For those that are not subs- you get a freebie- heck I bummed 2 charts.

Anyway as for the market, I cannot say I could agree more with Fearless’s last post. Longer-term there is much potential given the panic (VIX and volume for that matter) in August. Yet, some red flags are prevalent. Let us have an unbiased look.

First sentiment, then stats, then spreads.

The CBOE equity put/call ratio is low and my daily sentiment data is off-the-charts. The NASDAQ daily is the highest since 2000- and here is what Jason at ST says “Hulbert Nasdaq Newsletter Sentiment was 75% net long again this week.  The 3-week average is now 75%.  That’s the highest average over a 3-week period since July 14, 2000.”

As always my hats of to SentimenTrader. 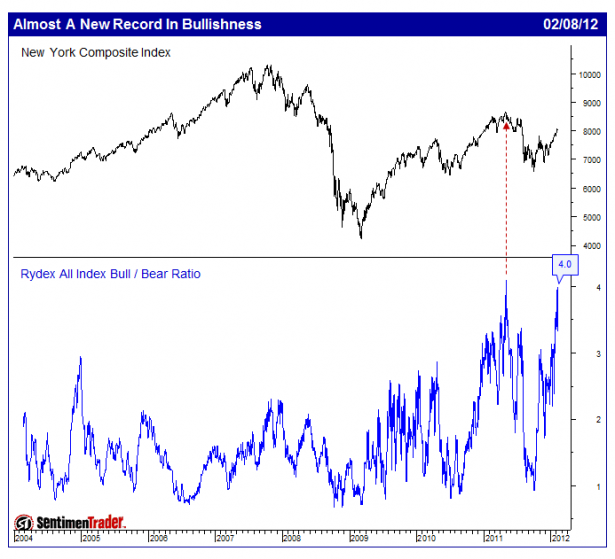 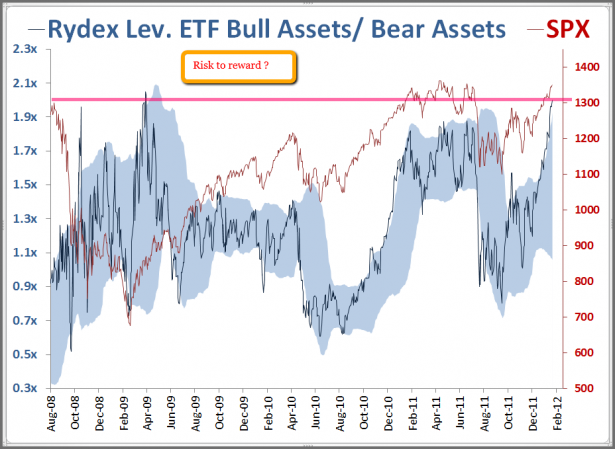 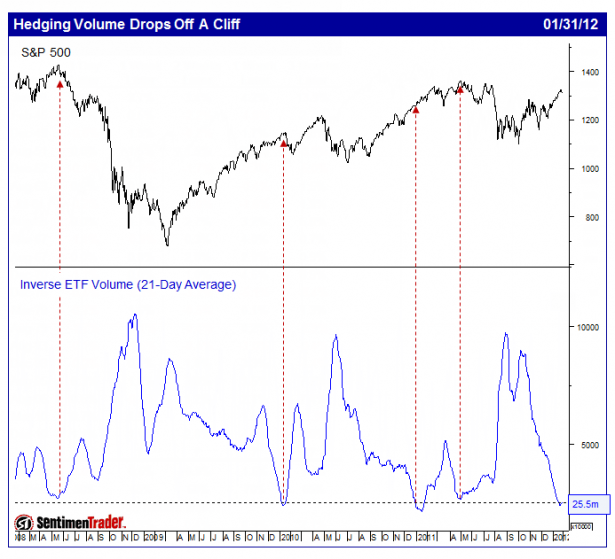 And… unreal. Now on to stats…
[amprotect=nonmember] A ton more of Volar’s charts and cynical commentary below for anyone donning a secret decoder ring. If you are interested in becoming a Gold member then don’t waste time and sign up here. And if you are a Zero or Geronimo subscriber it includes access to all Gold posts, so you actually get double the bang for your buck.
[/amprotect] [amprotect=1,13,9,12,5] 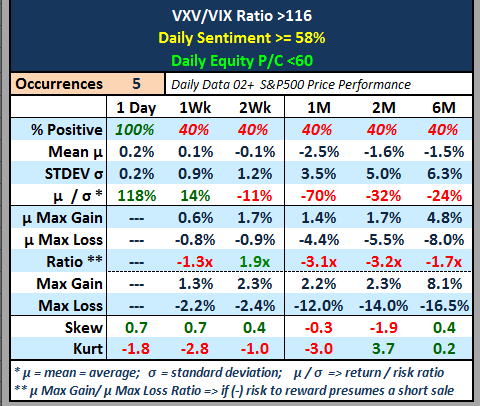 And a chart for perspective. 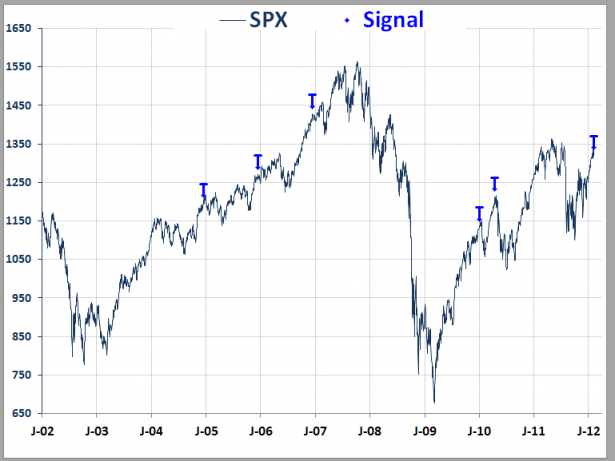 Here is the raw data.

And here are some key metrics during the signals.

Clearly rare event and risk of a short-term correction.

Now 2 things to remember about me:

(2) I do not use fundamental analysis as a trading tool for equities- but I always watch stuff. I just want to open your eyes to some research-real research. I just wan to throw up when I turn on CNBC or read the WSJ. The general public is full of blissfully ignorant morons, who drink koolaid like its going out of style. Politicians, analysts, people, and news- all just crap. Zero Hedge may have a bias, but at least there is reality. I do not suggest you use this data to trade- I am just revealing some economic data so you all can have something intellectually stimulating to read over the weekend.

FWIW I have been really really LONG RBOB and made a killing based on seasonality and a technical breakout- but I am out now.

First we should look at the dollar data- to me Brent is a bit high. 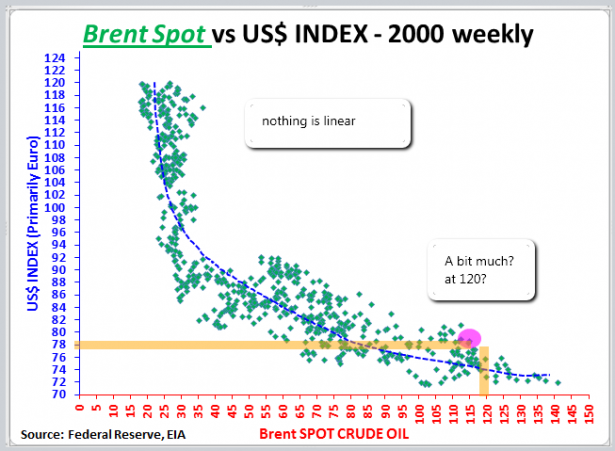 So just saying the market is trading high relative to the dollar. So one would presume if this is going on, fundamental data must be really supportive… problem is…. it is not for the moment.

Consider what 3.14 APR RBOB will do to already horrid demand… 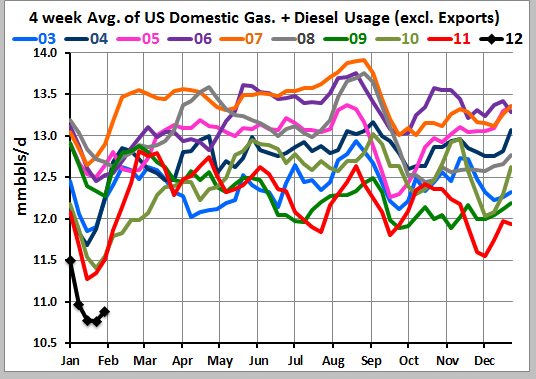 Here is total U.S. demand including exports for Gasoline. Amazing what high prices can do…. 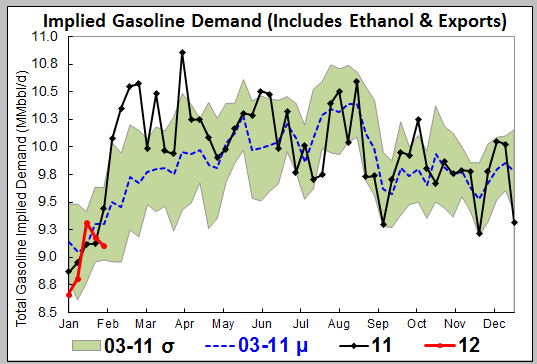 So clearly exports have been key- but right now they are able to bail out the total demand number as U.S. demand is horrid. 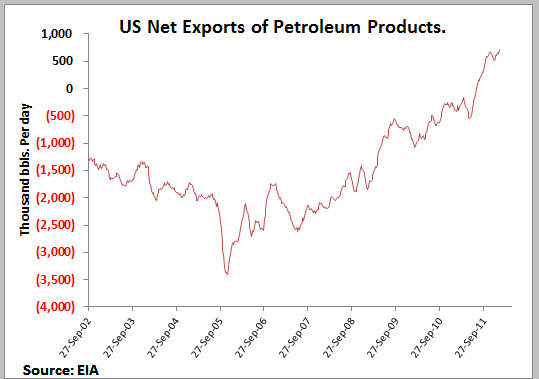 Ya not in the news – go figure. Clearly exports have been key- but what happens when Brent is at $120 for too long? Well China auto sales SUCK, and that may reduce global demand, and consequently, our exports. I am not saying we export directly to China, but when one area losses demand, supply finds a home elsewhere.

Now I bring up China, because China has been 33% of all GDP growth since 2007. China autos just dropped nearly 30% and commercial sales are the lowest in 3 years. It is one thing to care about the collapsing participation rate in the US, but China is a big deal. 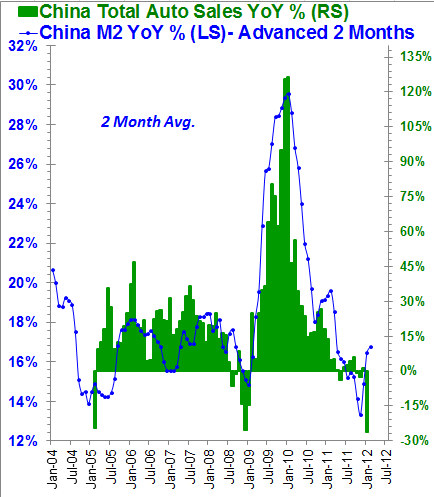 The primary reason for this drop is M2 (no that is not on CNBC). So this was not too much of a “surprise” to me as the M2 suggested this, but it still is a big deal IMO.

Here is auto sales and oil demand- Remember China has been well over 50% of oil demand growth over the past years. 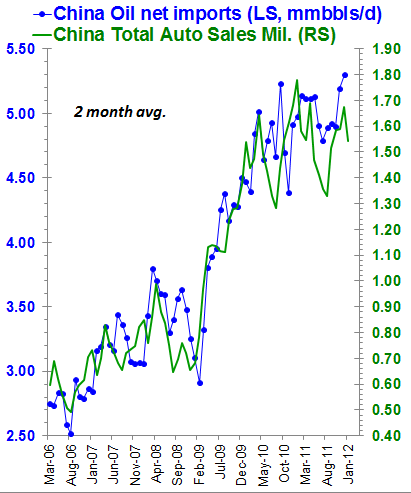 This may cool off oil imports- but who cares I guess… BEN gets his wish.

This was an easy technical trade. 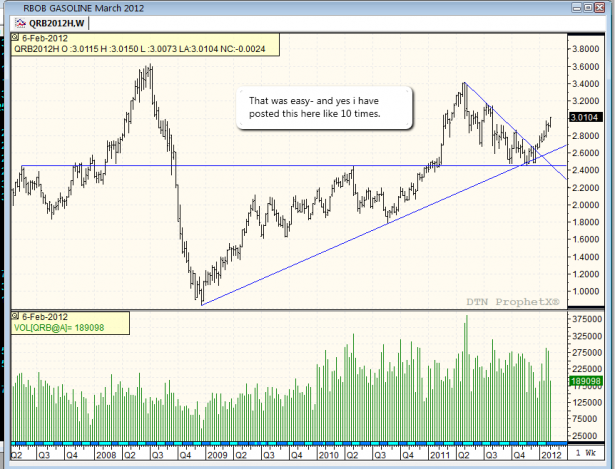 And another reason was the strong seasonality. 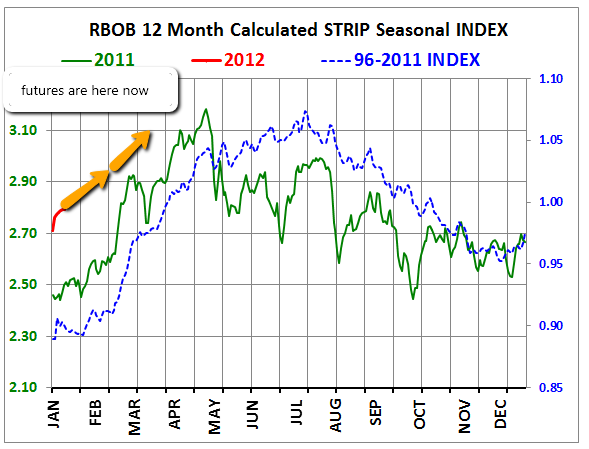 And brent- what falking awesome base! Man i llove this trade- nuts that the fundamental data is just retarded. 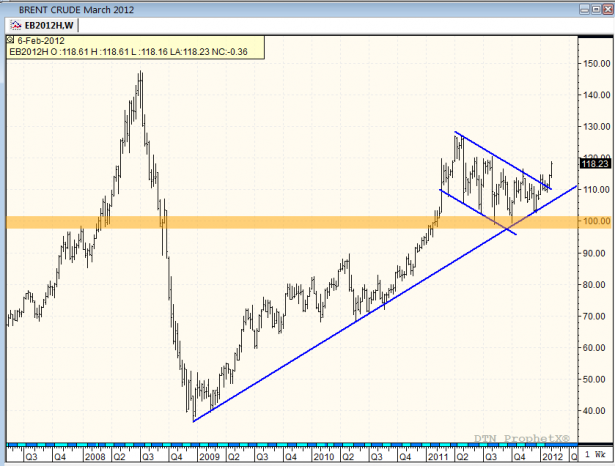 So that worked out well. But one must just laugh at the irrationality in markets today. I hear we are short gasoline supplies and yet refineries are going to produce a crapload… the chart below is a gasoline “crack/crush” on a 3 month basis. Unreal. Unreal. Unreal. 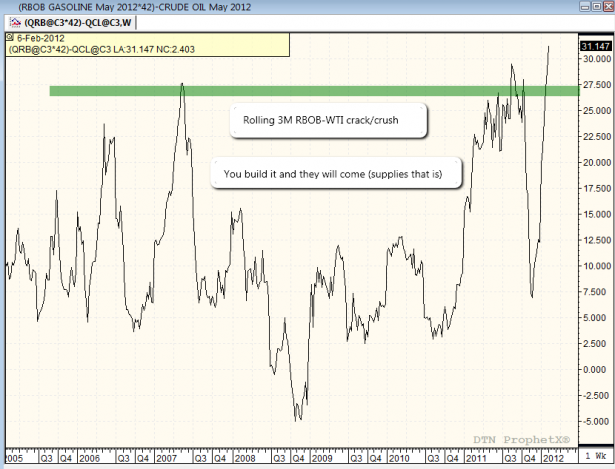 Now here is the deal Eurobob is the same falking way! We wont export, but we will import… This is US gas- Europe crude on a out-front 3 month basis. 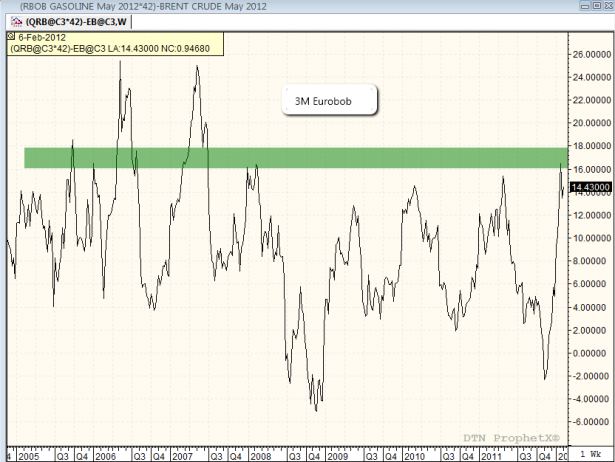 How many times do you here eurobob on the Wed. CNBC oil report? Ugh.. so lame- I get so tired of the simple minded- linear thinking- one tracked media.

And another chart- US oil drilling rigs. You see this on TV? Unreal-koolaid amok. 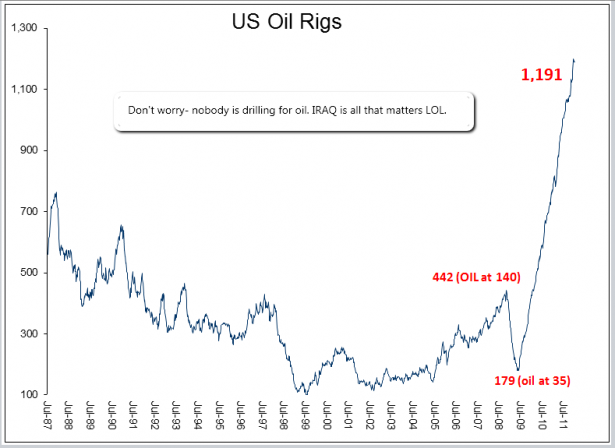 I leave you with a fun chart. 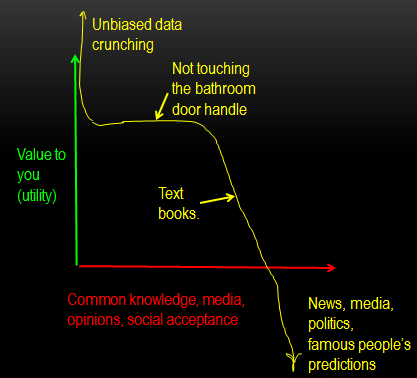 So bottom line: the global economy has bailed out the energy markets since 2009, but there are some cracks out there (pun intended). US may not be able to ration demand much more and exports may not be the story in 2012. And if you think supplies are tight (cause we no demand is in the shitter), well refineries produce it. So just thought I would drop this by you all, bc what the heck else do I have to do? Nobody in the media will talk about it…
[/amprotect]

Not sure all of that should go in one post – but now you have something to do this weekend besides get off on Ben Bernanke.