Nothing really has changed on the wave count. So as to not bore you to tears with the same old story I dispense with my usual wave update and will share with you my latest creation, which admittedly is not something completely different but a merely a different outlook on something that’s right under your noses every day. Besides, it makes for a damn good excuse to post a Monty Python sketch.

I’ll reserve the ‘unexpected’ for when it’s time to quote the Spanish Inquisition. Soon, my impatient steel rats – soon![amprotect=nonmember] Charts and commentary below for anyone donning a secret decoder ring. The rest of you guys will have to wait until tomorrow – sorry. If you are interested in becoming a Gold member then don’t waste time and sign up here. And if you are a Zero subscriber it includes access to all Gold posts, so you actually get double the bang for your buck.
[/amprotect] [amprotect=1,9,5,2] 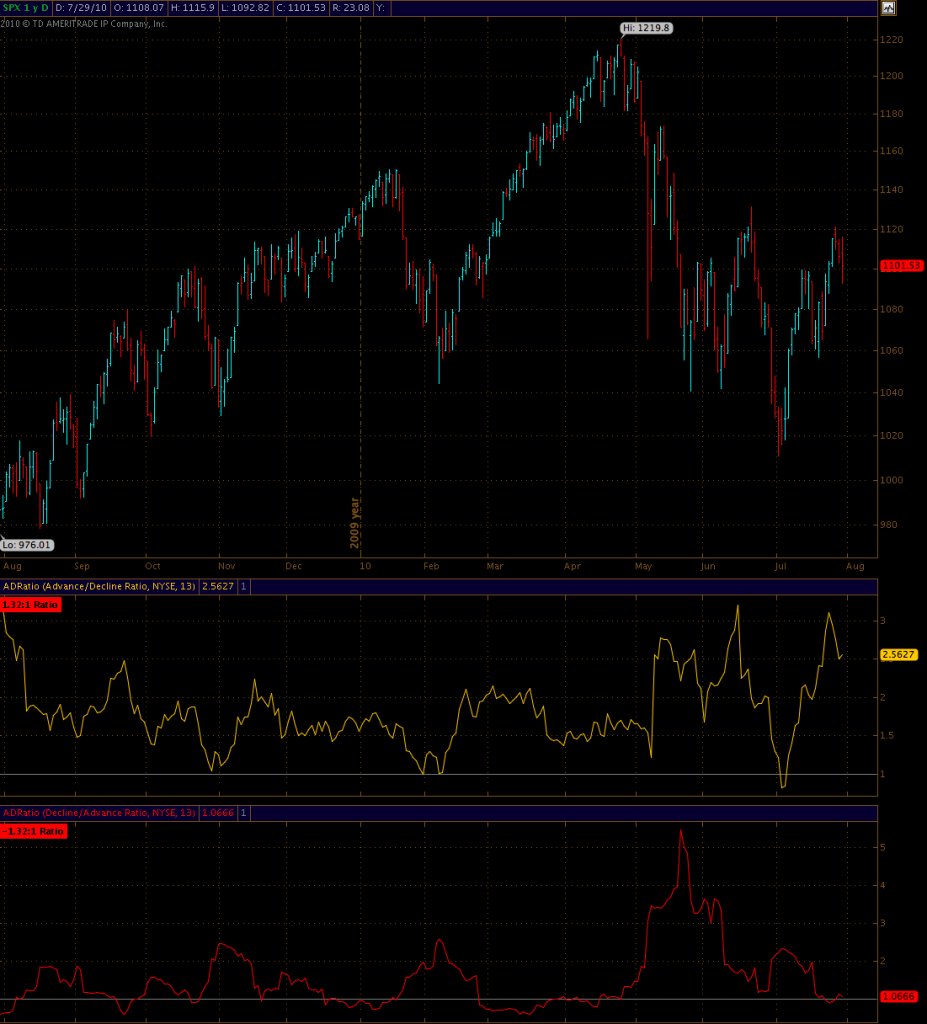 And there you have it. This afternoon I was playing around with my charts (no, I don’t have a life) and I suddenly had this weird urge of slapping an SMA on various renditions of the NYSE A/D ratio. I tried various levels of smoothing the daily signal and as so often I like the 13-day SMA the best.

Now, there are various ways of looking at this chart – I have hacked the original TOS study to also present a D/A ratio and it’s shown as the red line on the bottom. Something that is immediately apparent is that the moving average of the bullish ratio has remained above the zero mark nearly for the entire past year (actually since March 2009). Since then we it only breached very briefly and it was at the very low of 1010.91. There are also various divergences I welcome you to seek out and put into context.

The red D/A panel looks a lot more tortured and I think it is an excellent visual representation of the wretched existence the bears had to accept in the past year or so. The heights of the positive signals breached the 2.8 mark only once during the ‘Fat Finger Freddy’ slide in May. What I find extremely interesting on that part of the chart is that the signal kept pushing higher, despite the instant snapback – thus suggesting that more downside was in the making. And that is indeed what transpired.

When I see divergences like that I do take note and I look for more ‘harbingers of truth’ if you will. If you look at the most recent push that brought us back to 1120 then it’s very hard to miss the accompanying strength of the green A/D signal. Yes, we’ve had some weakening in the past few days but that does not necessarily mean that we drop from here right away.

Look at the red D/A signal and it is actually as weak as it was back in April. Which may be a good thing as meaningful reversals seem to occur after a push above below the 1.0 mark on the D/A panel. A little bit like a swing above the 20% mark on a stochastic. As of tonight we are above that mark but we are pointing down a tiny bit – which may mean equities rally a bit higher before they are ready to drop. Once we see the red signal climb up just like in late April, then we may be more bold when projecting a reversal in equities. Until then I will continue to entertain Soylent Green. Unless of course we breach the 1088 mark – but I reckon that this would be accompanied by a stronger red signal as well.

Before I go let me thank the small group of intrepid stainless steel rats who have made it a point to keep the comment section humming during this summer of pain – despite the fact that many old regulars seem to have vanished in mid air. You can imagine that sitting down and writing a productive post nearly every trading day (and Sunday) of the year is not the easiest thing to do. And trust me – it’s a lot harder when you see participation take hit, may it be because of whipsaw tape, seasonality, or other reasons. Most of the time it’s fun and comes easy – and sometimes it’s a chore that I force upon myself as I feel a responsibility to my subscribers first but also to anyone else who frequents this site. And I will continue to do so as long as I feel appreciated and my charts make a difference on your side of the trades.