A few days ago I got a bit frustrated thinking that I had missed several break out patterns which in hindsight looked hard to miss. Since then however almost all have turned on a dime and I am happy to report that I have already canceled my e-Bay order of a slightly used Japanese seppuku training kit.

Now it’s a wee bit early to think about BTFD entries on some of the candidates I at least believe continue to have medium term trending possibility, e.g. the EUR/USD, bonds, precious metals, etc. Plus it’s already Friday and that is not usually a great day for snagging a break out pattern. So instead let’s address the big elephant in the room, which of course is the fact that Soylent Green Is Retail Traders! 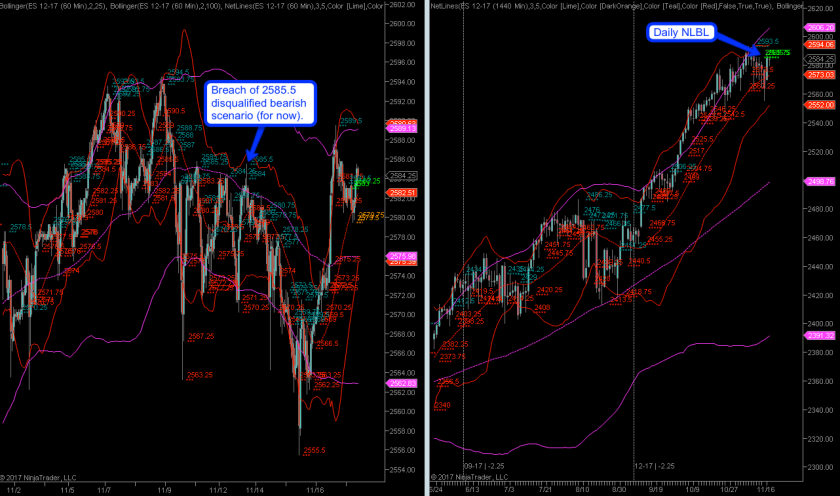 Believe me, it was rather tempting yesterday morning to hop on the bearish bandwagon as the equities across the board looked as bearish as a grizzly wearing a fur coat. I mean signs of distribution were present, we had a series of lower highs and lower lows on the short term panel, bearish divergences galore on the Zero indicator. I personally gave the downside scenario a 60% chance and what we got instead of course was an instant short squeeze from hell, which had been my 2nd scenario but it still surprised me. At least I got one thing right, which was my assumption of a significant move that would sweep a boat load of stops. At least on the volatility front, as usual, equities didn’t disappoint. 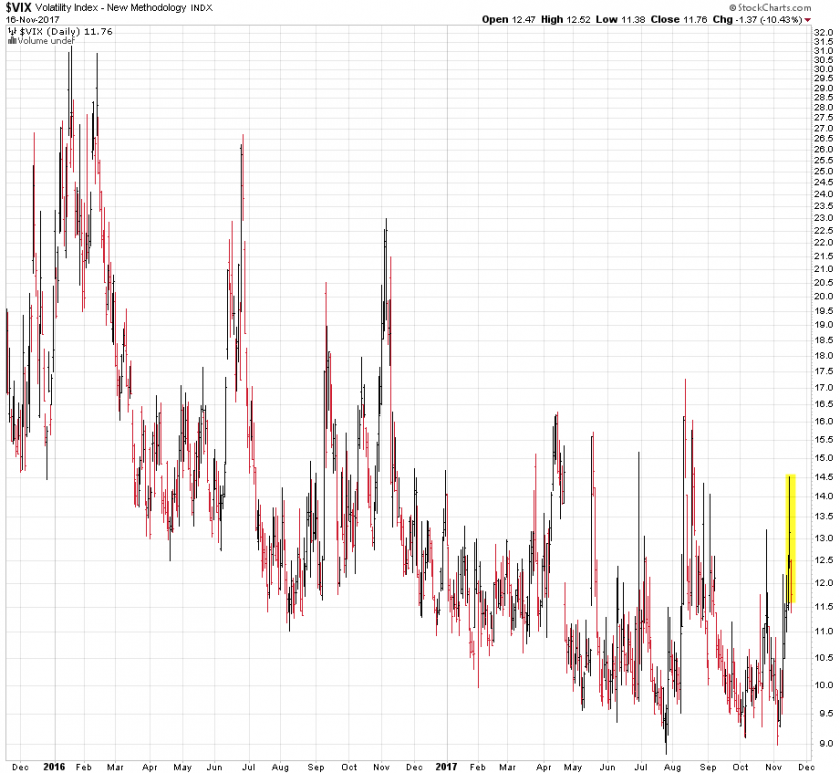 Not surprisingly the VIX got hammered and in the process caused all kinds of shenanigans on various pertinent ETFs, such as the VXX, XIV, UVXY, etc. Attempting to track sharp swings outside the 2.0 BB usually leads to inconsistencies and in turn produces unexpected losses for people. Which of course, is the whole idea of running these ETNs in the first place.

Why exactly is that the case? Well, I’m glad you asked! 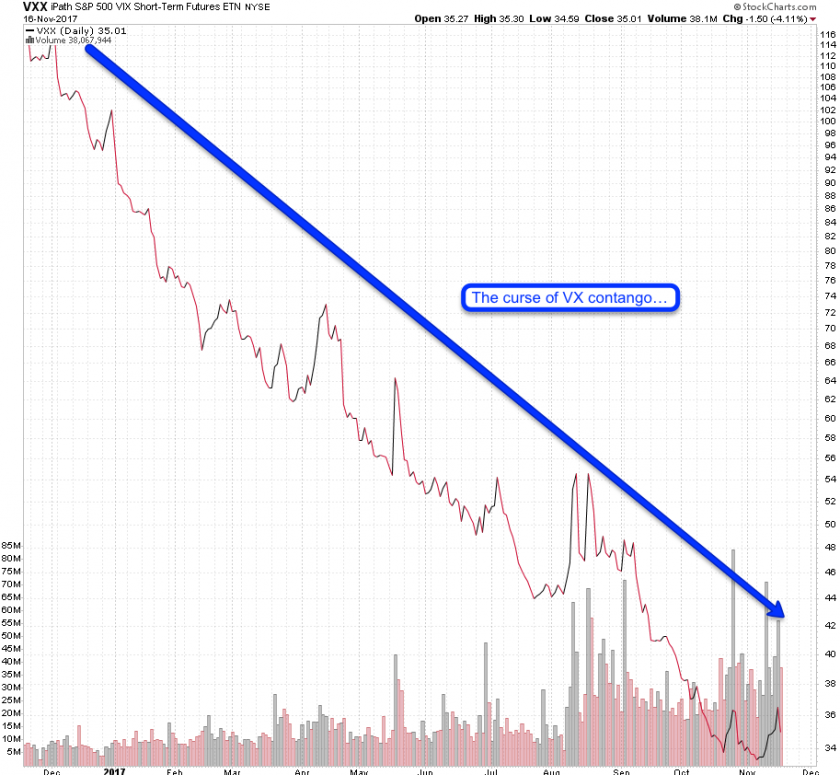 VXX is a great example of this, loved by both retail and institutional traders, but for different reasons. The latter are enamored with the idea of being able to ‘trade volatility’ whilst in the vast majority of cases are losing their butts doing it. And the latter of course usually are the ones on the receiving end of the profit/loss equation. The main reason for all this is that retail traders in general (that means not all but many) do not understand how these ETNs/ETFs work.

For the most part VXX trades like a stock and with average volume of over 40 million shares traded each day it’s liquid as hell with about 1 penny in spread. Another aspect of its profitability is that it can be traded (long) in most IRAs once you sign a waver documenting the risks. However while it looks and trades like a stock it’s an ETN closely tied to an index maintained by the S&P which in turn manages a hypothetical portfolio of the two nearest VX short term futures contracts, the mixture of which get updated daily. Complicated, right? I feel you but it gets worse.

Now the VXX attempts to follow that index, which is published every 15 seconds as the ‘intraday indicative’ value (IV) – the Yahoo symbol is ^VXX-IV. In order to keep the VXX in sync with the IV Barclay’s uses ‘authorized participants’ who profit from intervening in the market should the VXX get too much out of sync with the IV (and thus implicitly with the hypothetical portfolio of VX futures). Which is why you often see the VXX lag behind the VIX and then suddenly catch up a few hours later, or perhaps a day later. Sometimes there’s a gap at the open which needs to be corrected, or does it? Well, depends on what the VIX and of course the VX futures are doing.

And if your head is spinning already then you may as well skip ahead as it gets even worse. You have probably heard about contango, which basically means that futures contracts trade higher than the anticipated spot price at their maturity. So in other words, a commodity futures contracts in contango loses a little bit of its value every single session. And over time this translates into a horrific time decay for anyone who holds that futures contract for more than just a few days. On the VXX we are talking on average about 4% per month, which is roughly 30% per year. So how does the VXX deal with contango related revaluation? After all, given enough time it is guaranteed to approach zero. Well, you guessed it of course – through reverse splits, accounting for the strange chart I’ve posted above.

Adding insult to injury is that the combo of VX futures that the VXX tracks aren’t doing a particularly good job and thus the VXX on average only moves about half as much as the VIX. Many times (about one fifth of the time) the VXX also moves ALONG equities, not against it. So retail traders attempting to use the VXX as a contrarian index are often disappointed when large moves are only partially tracked.

Now if you know what you are doing (and very few do) then the VXX and other pertinent ETFs/ETNs can be very profitable tool in your arsenal. But I personally know several highly intelligent quants who literally spent years of their life and significant resources/effort to produce trading systems that account for a whole host of factors. If you feel like you can beat those guys then go right ahead. Otherwise and if you don’t want to wind up in a can labeled Soylent Green then you better stay away from trading implied volatility as you most likely will be taken to the factory

Now since we are on topic I have two very juicy IV charts I’d love to share with my intrepid subs. Please step into my trading lair: