UPDATE 1:30pm EST: As you know I’m watching the futures pretty much tick by tick all day. Not because I trade them heavily or that I’m a daytrader but just to get a ‘feel’ for the market. 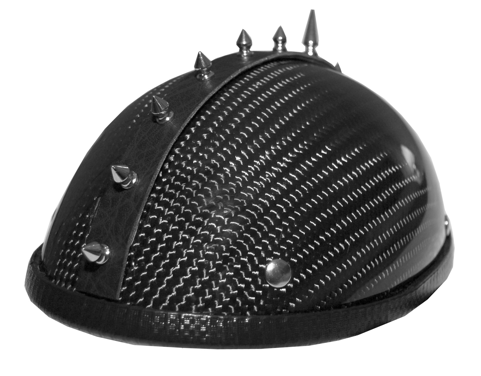 What I keep seeing for the past few days are ‘trigger spikes’ – for a lack of a better name. So, you see the market happily wind its way down and then suddenly you get a massive spike to the upside coming out of nowhere. Panic short covering ensues and – voila – the short term trend switches to the upside. Lather, rinse, repeat.

Now, this tells me something. First up it tells me that there’s a strong buyer of course. But the timing and placement of these trigger spikes seem to be very deliberate and occur at key lines, sometimes after a small overshoot.

Then I’m looking at the Zero chart and there’s no momentum either way. The Yen also is just flatlining – and its valiant attempt of breaching S2 was quickly stomped on. TNX is pushing towards 2.9% again, which is bullish. 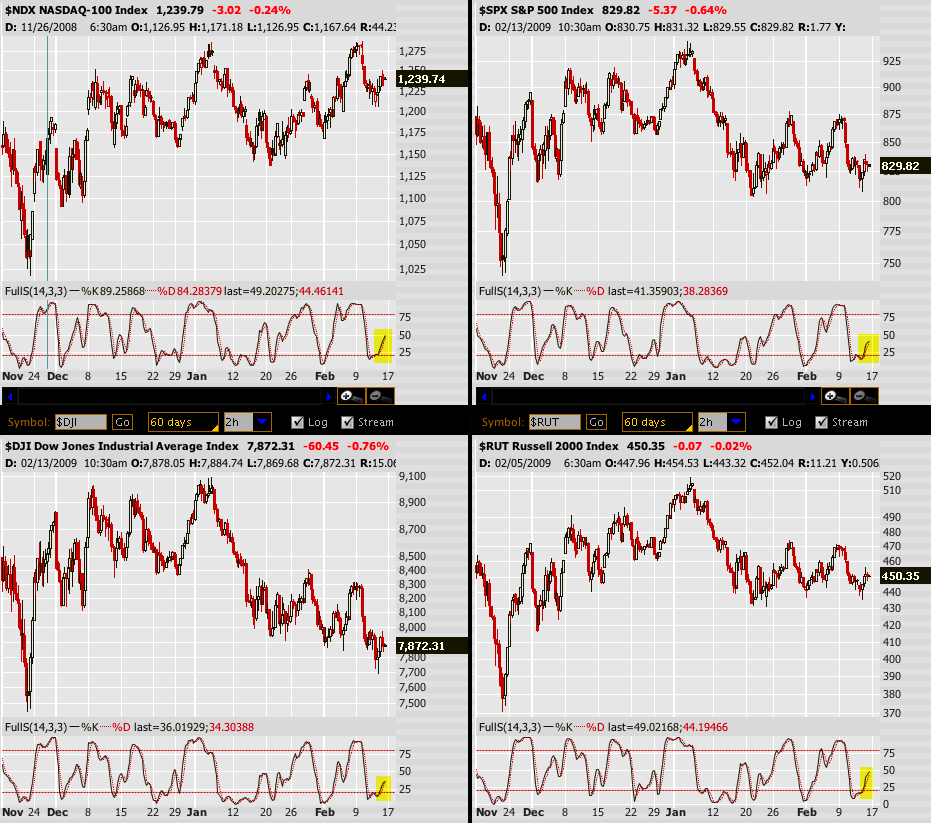 Then I’m looking at my trusted stochastic grid and am not liking what I see. Ladies and leeches – this is not the type of setup I usually short into. Rather, this is where I take profits and go long. That line keeps pushing the upside and based on months of monitoring this very chart I am very hesitant to be exposed to the downside.

Now, maybe I’m wrong and that line is going to wiggle itself back down again. But, I have very rarely seen that – so you tell me if as a trader it’s worthwhile to pull the trigger on going short. If nothing else long symbols might be worth considering at this point.

Just a warning – I don’t want to freak you guys out, but this is pretty strong evidence to support stepping to the sidelines. You know I’m an Ueberbear by heart, but I’m also a trader and as much as I want this fucking market to crash, I just don’t see it right now, today, before the long weekend. 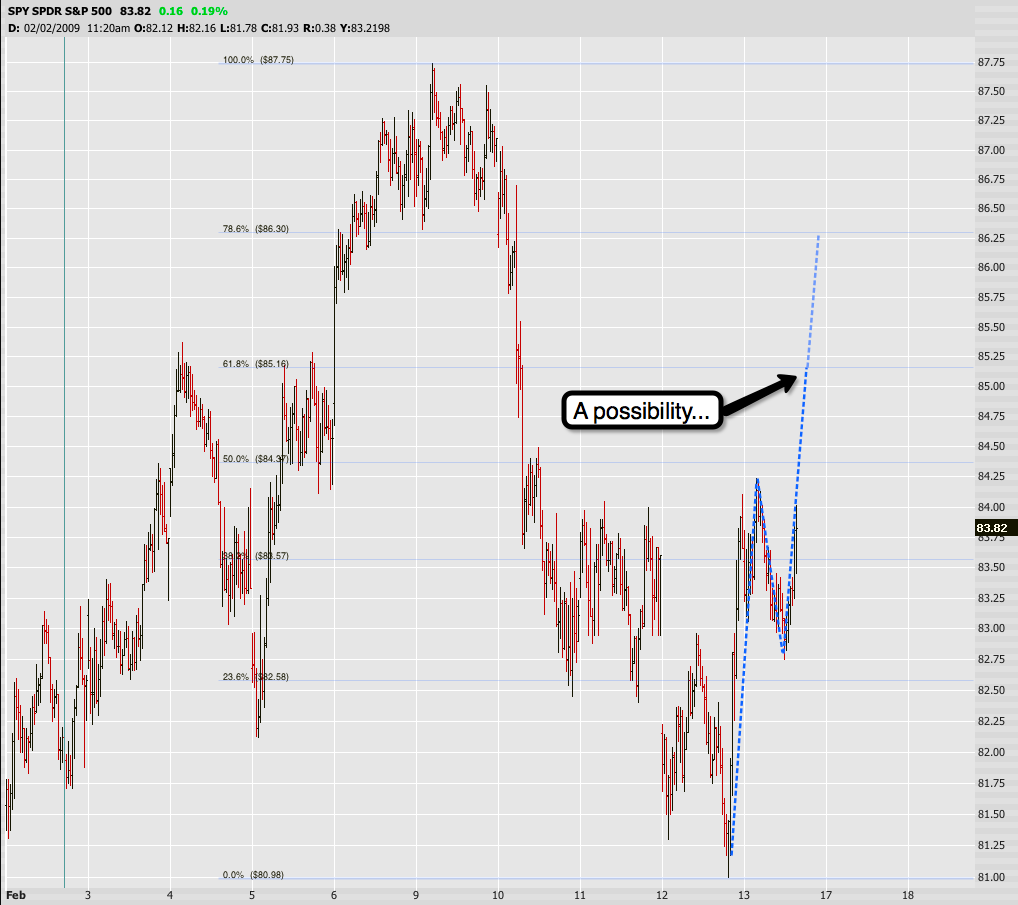 Here’s a possible scenario – not sure that’s what we’ll get but if we breach 840 on the SPX it’s a real possibility. FYI – we are now above VWAP on all index futures – here comes the retest.

UPDATE 2:20pm EST: Eric has been posting a lot of XLF charts. Here’s my take: 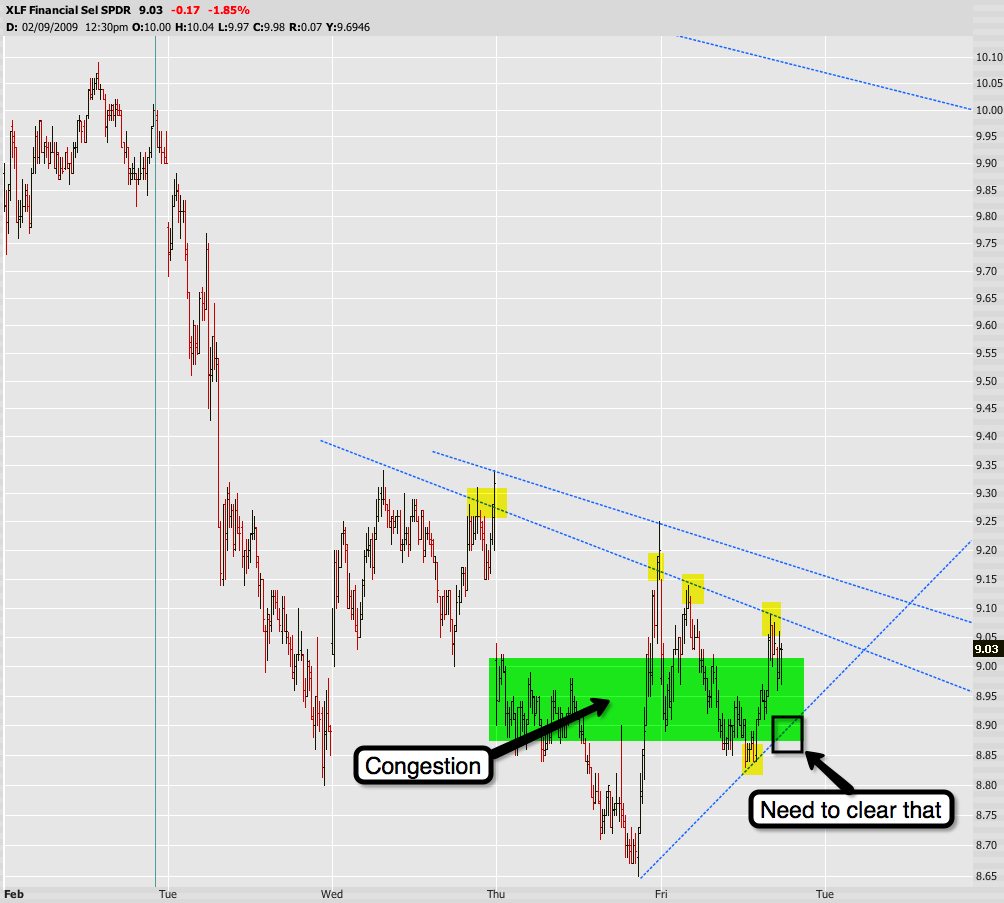 Thus far we remain stuck in the chop zone…

UPDATE Closing Bell: What we saw in the last two minutes was nothing but profit taking before the three day weekend. Like a little ‘thank you suckers!’ to everyone who was hoping we’d rally hard. I didn’t get resolution either way – no new highs and no breaches of significance. This was just one big chop fest and the 824 low in the SPX held.

As I’m typing this the index futures keep dropping like a rock (819 now). So you GOT to wonder if all of this was just one big middle finger to the bears and that the top dogs made their money and now won’t care about letting equities slide. All I’m sensing in the market right now is confusion – and as you can judge by the Zero/Mole – there is little participation.

Tough tape but we can’t force it. I personally prefer to position myself outside of chop zones. Anyway, I’ll be pouring over my charts again for the next few days, trying to make sense of it all and come up with a strategy for us rats. Right now I feel we’re in limbo. Many of us are not leveraged to the downside and we also are not given distinct opportunities to load up again. If we drop from here it’ll be one big waste for most bears out there.