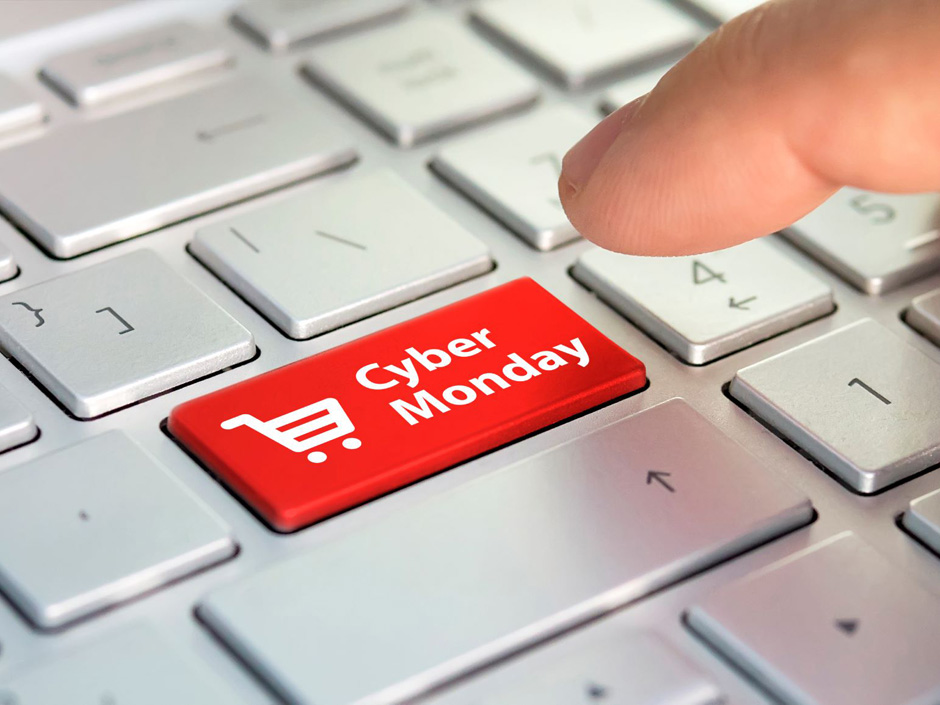 It’s Cyber Monday and the first week of December which that means you are going to buy a bunch of crap you don’t need and I have more statistics lined up than I could swing a stick at. I really hope you’re not reading at this on a mobile phone or you’ll probably have bricked it by the time this page has fully loaded.

Which probably would be doing you a favor as you spend too much time staring at the damn thing in the first place. 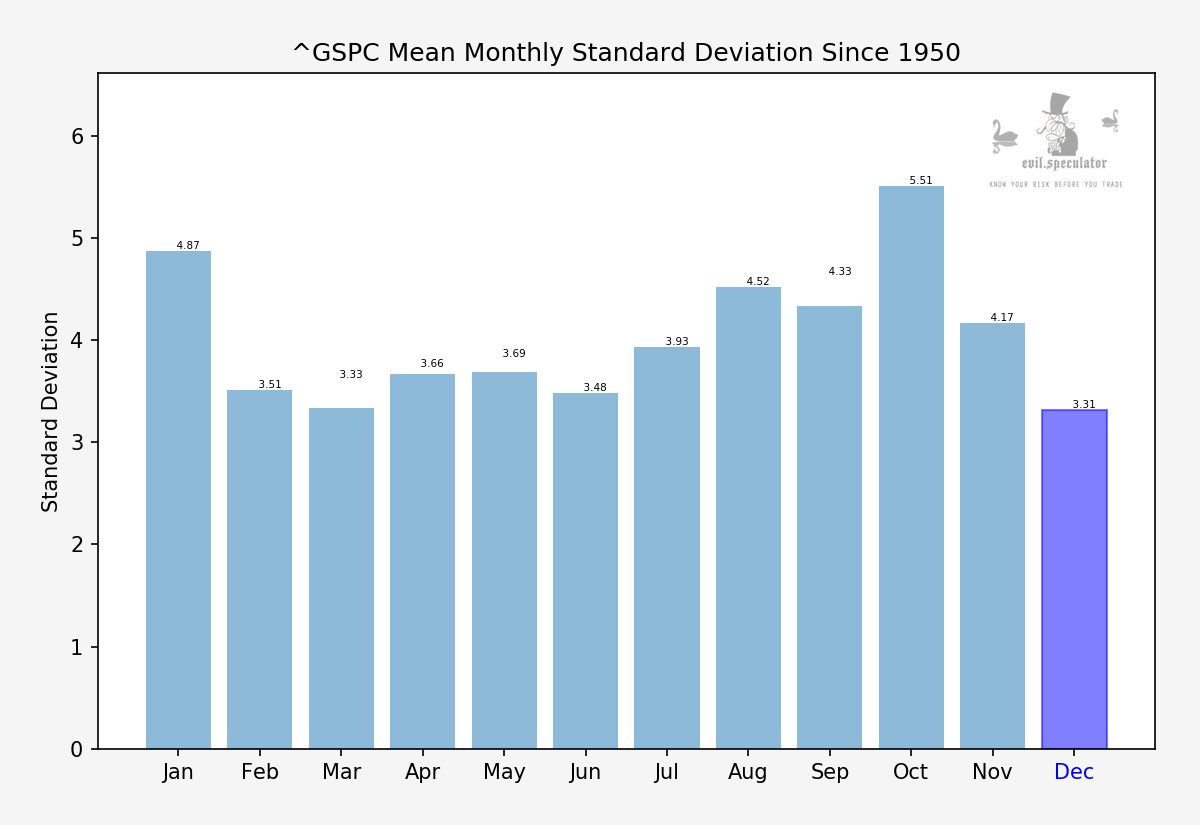 Okay so lets’ get you warmed up and comfortable. Standard deviation is historically low and most of the fireworks happen in the first two weeks of the month. 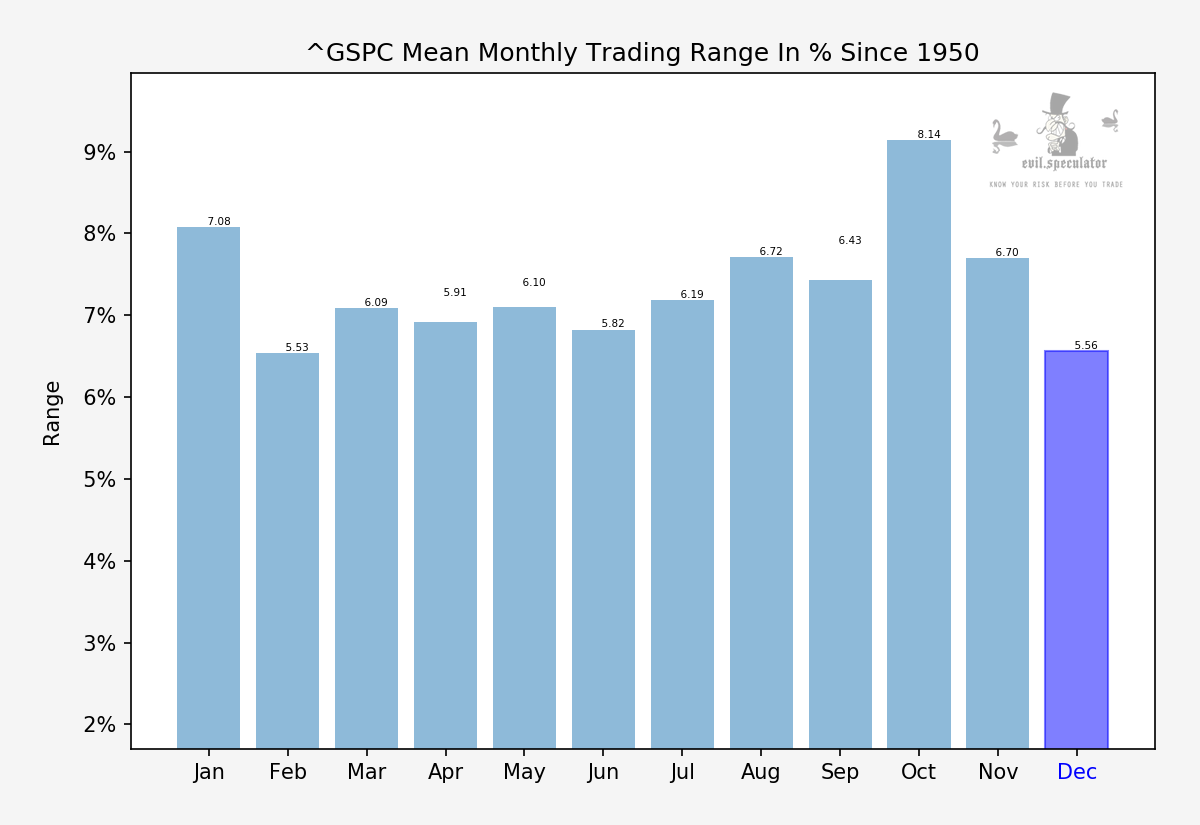 Meanwhile the trading range is the second smallest of the month, which suggests less volatility. 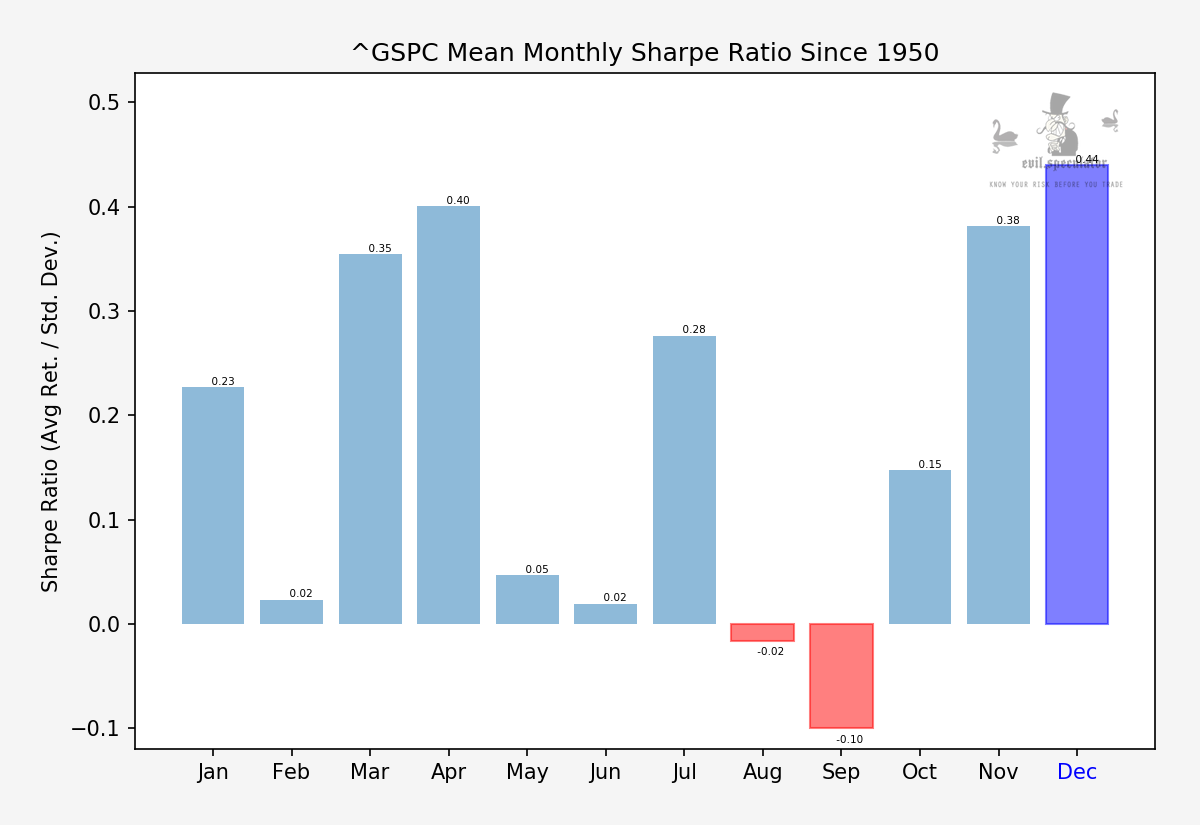 Despite a small trading range Sharpe stats for the S&P 500 are excellent at 0.44 – even exceeding April and November, which are part of the top quantile (shown further below). 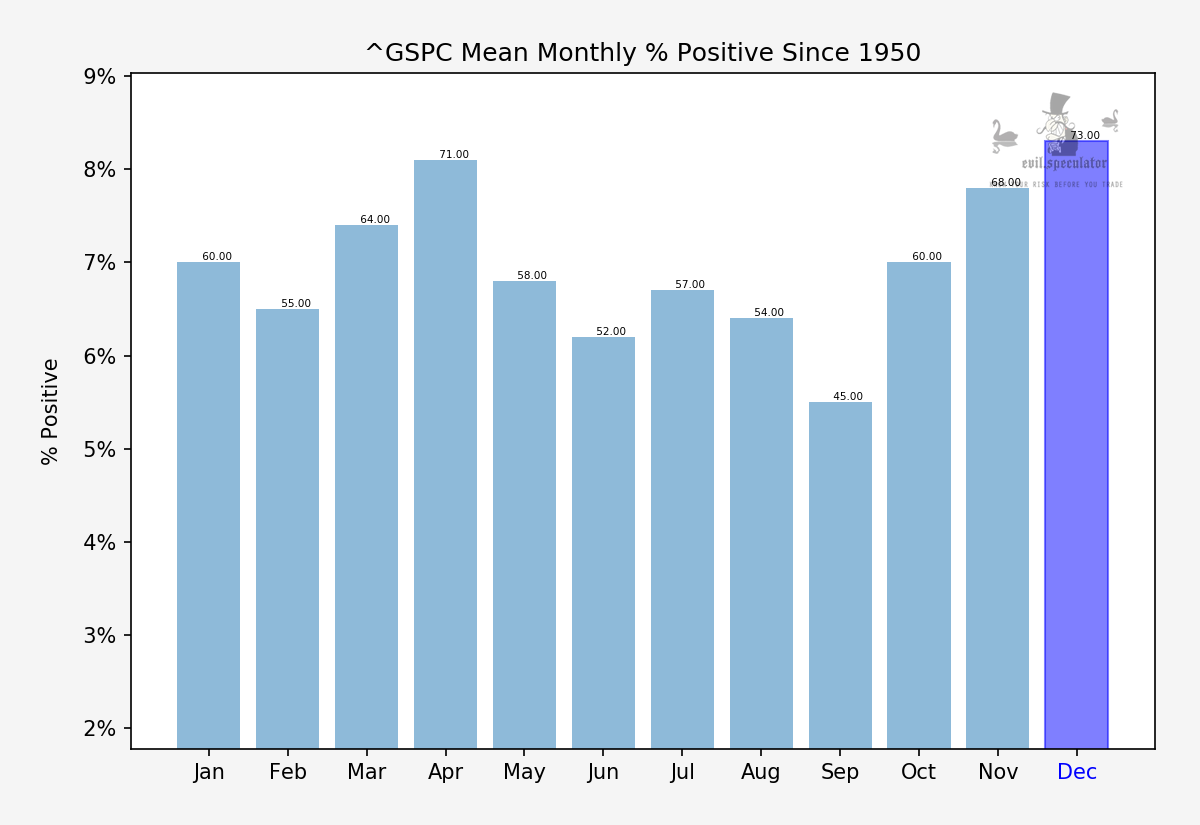 Yes the Santa Rally really is a thing which is evidenced by a whopping 73% positive closes for the month of December. 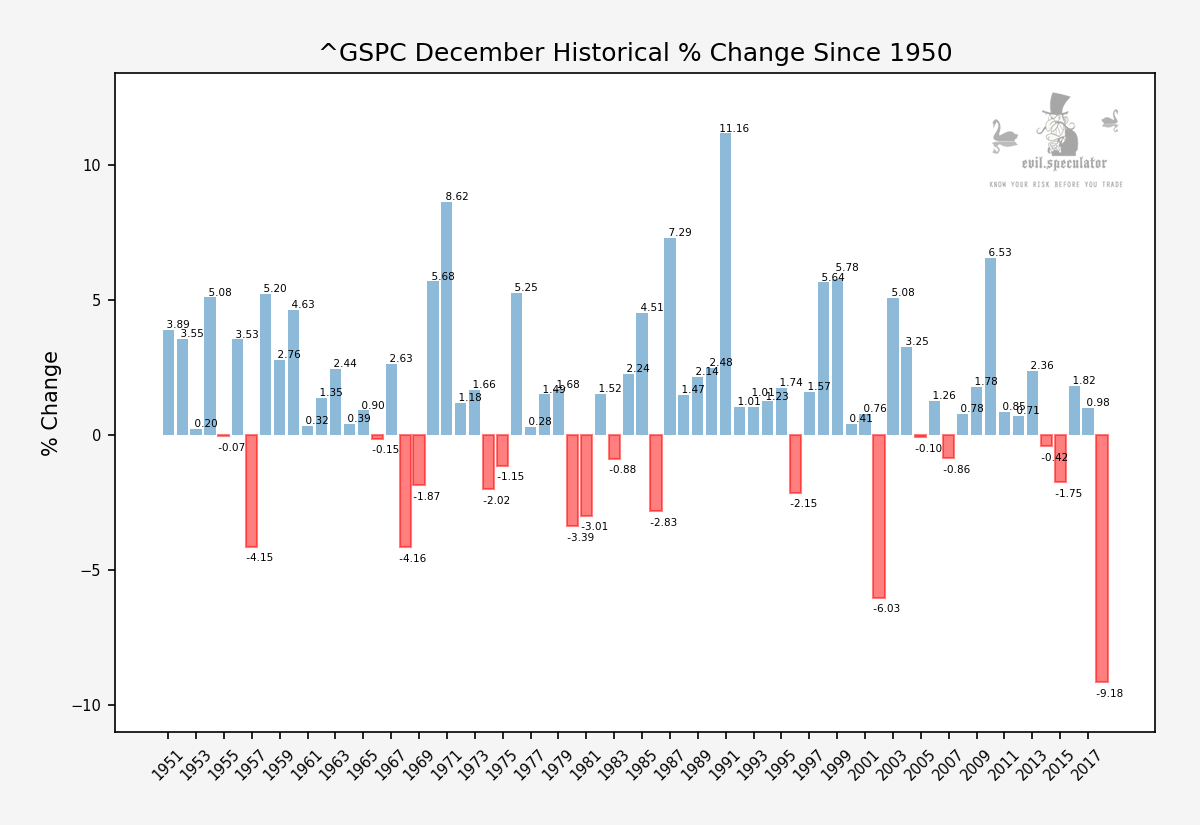 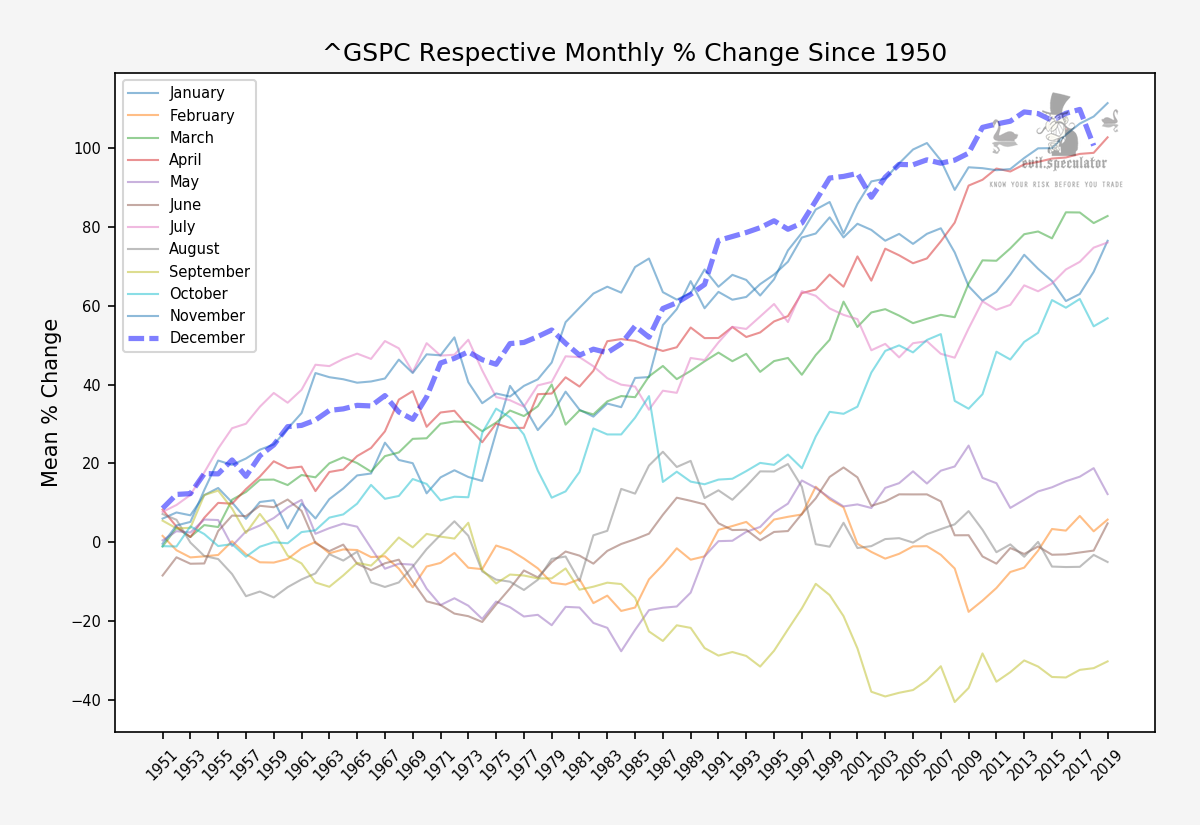 So it’s not really surprising that December ranks as the top performing month since 1950. The chart above simply adds up all the December returns and plots it as a single percent change curve.

Meaning had you bought on Dec. 1st and sold on the 31st every year you would have doubled your money. Not a trading strategy anyone would have any patience for but you get the idea. 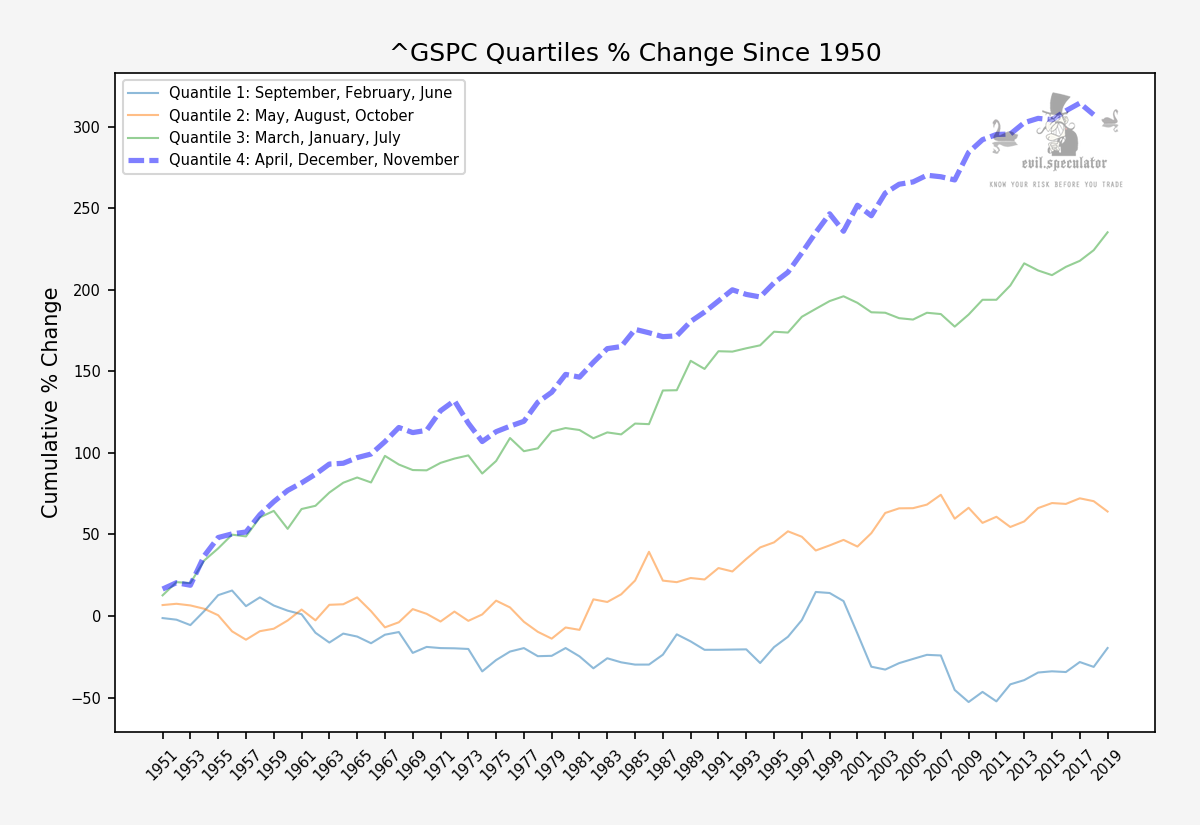 All that puts December into the top monthly quantile, along with April and November. Very very tough to be a bear in the winter and apparently during Eastern as well. 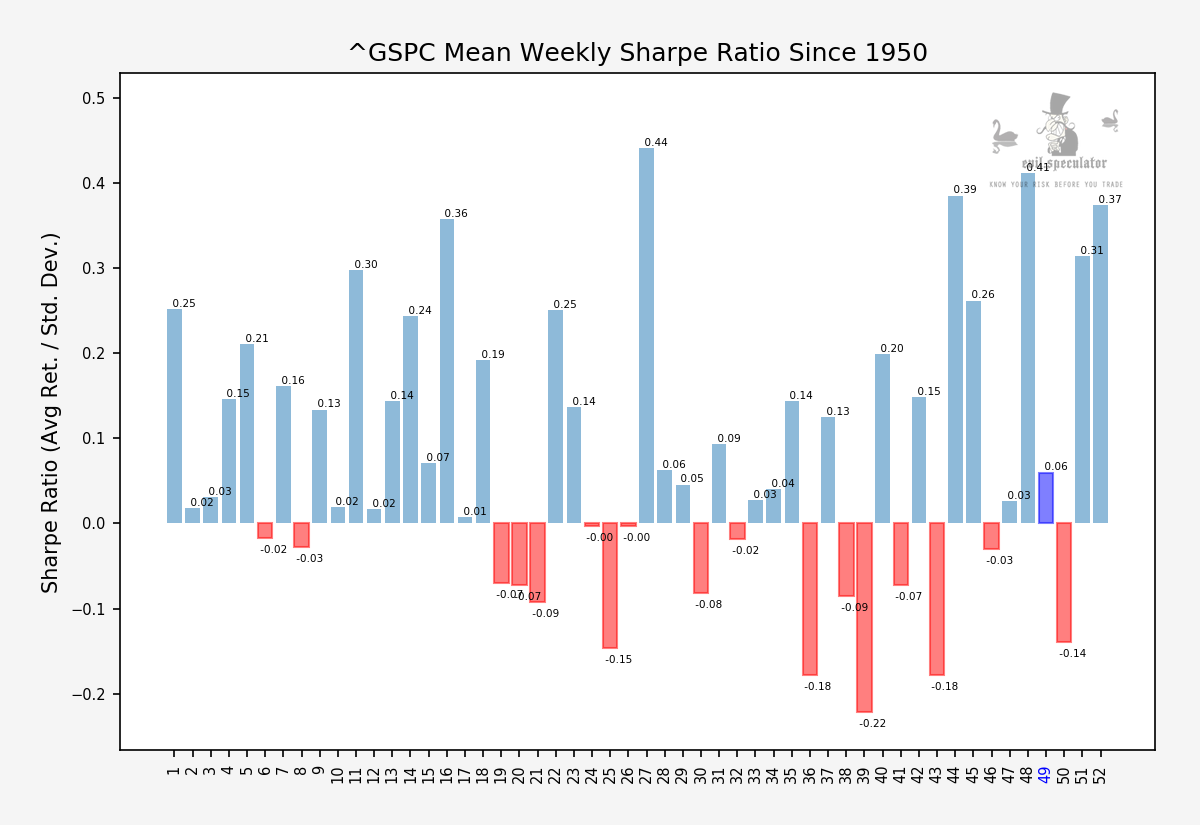 The weekly stats however suggest that the first two weeks of month can be temperamental, especially next week suggests a bit of caution ahead of the annual ‘Santa Rally’ (unless it’s called off again like last year). 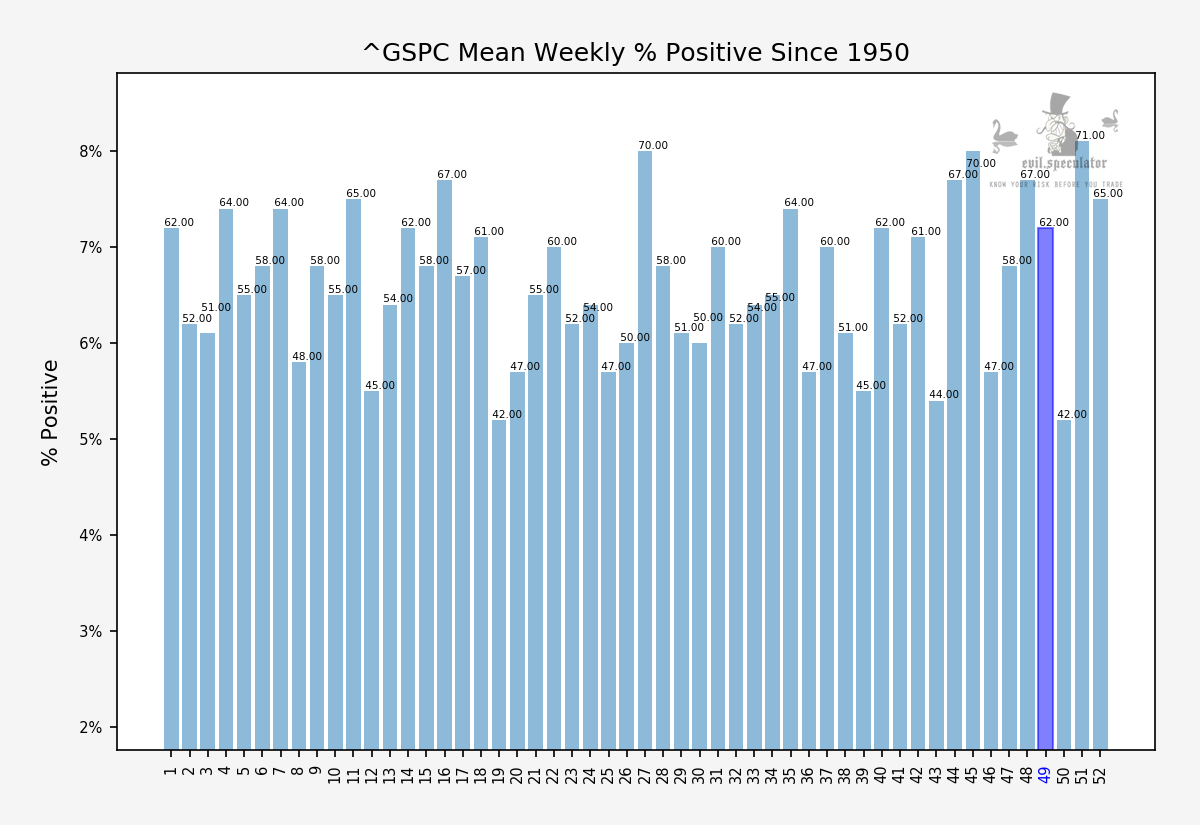 At least this week promises a good win percentage – historically we are at around 62%. Odds I’d take any day. 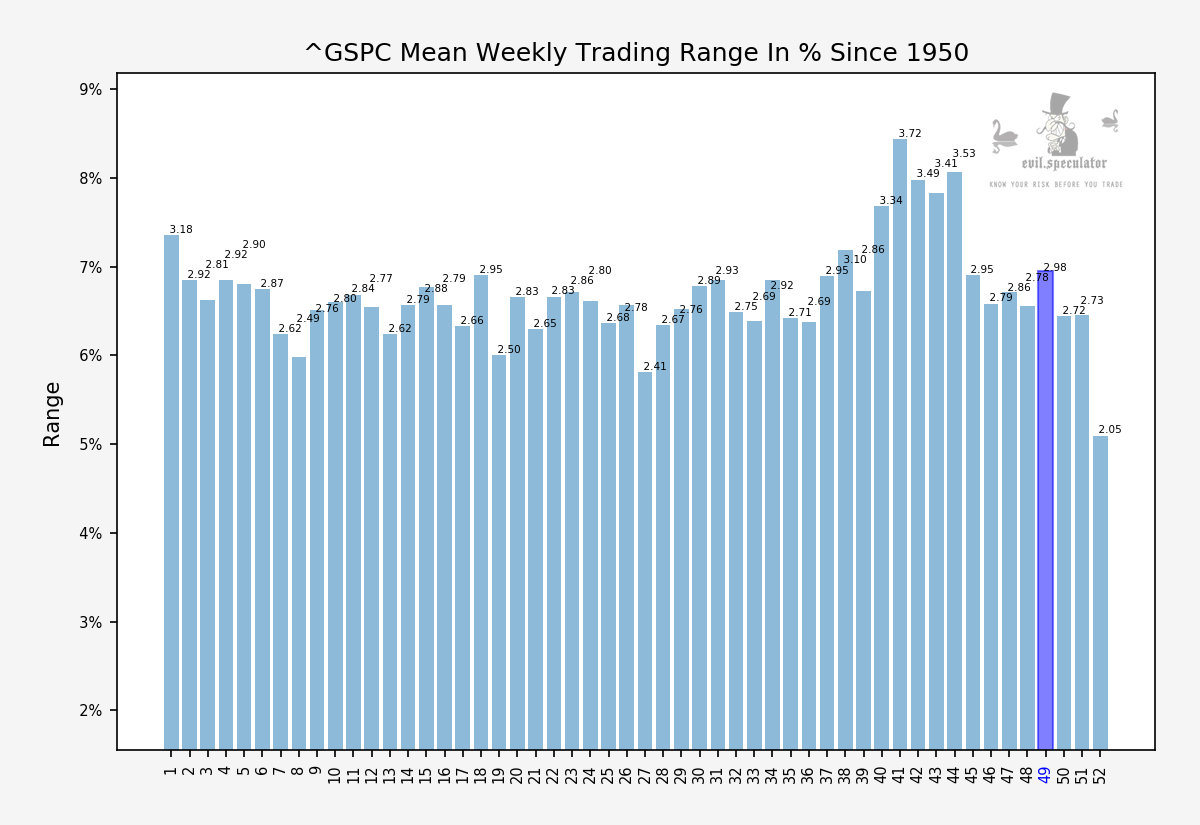 The weekly trading range stats also suggest that most of the volatility happens in week #49 (this week) after which it gradually drops off. Week #52 is usually on cruise control and usually to the upside. 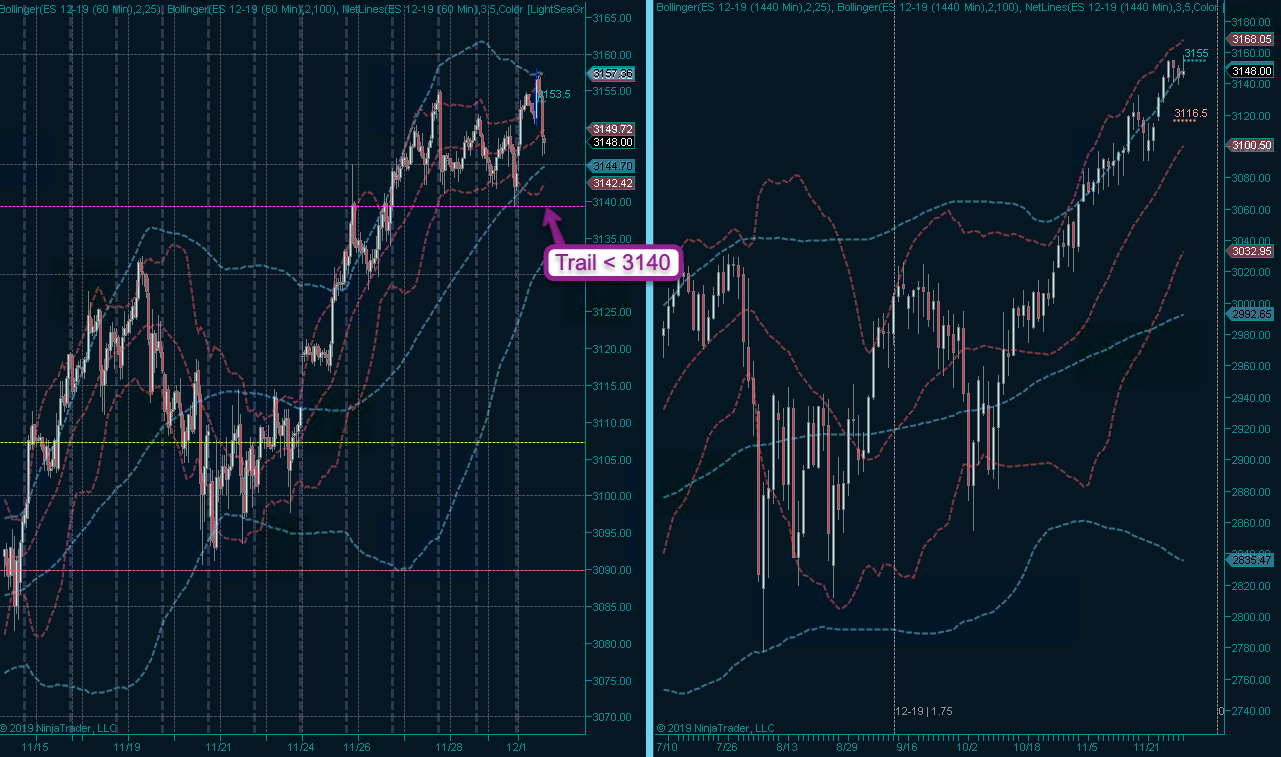 Given all the above I think trailing here below the recent spike low near ES 3140 is reasonable. Hey, and it’s part of the rules, so no discussion, despite some of the bearish signs below

The stats also suggest that I’ll probably be stopped out by next week at the latest (I should be so lucky) and that a re-entry may represent itself in week #51. Sounds like a plan.

Speaking of getting stopped out – volatility is already jumping higher in anticipation of a possible shake out: 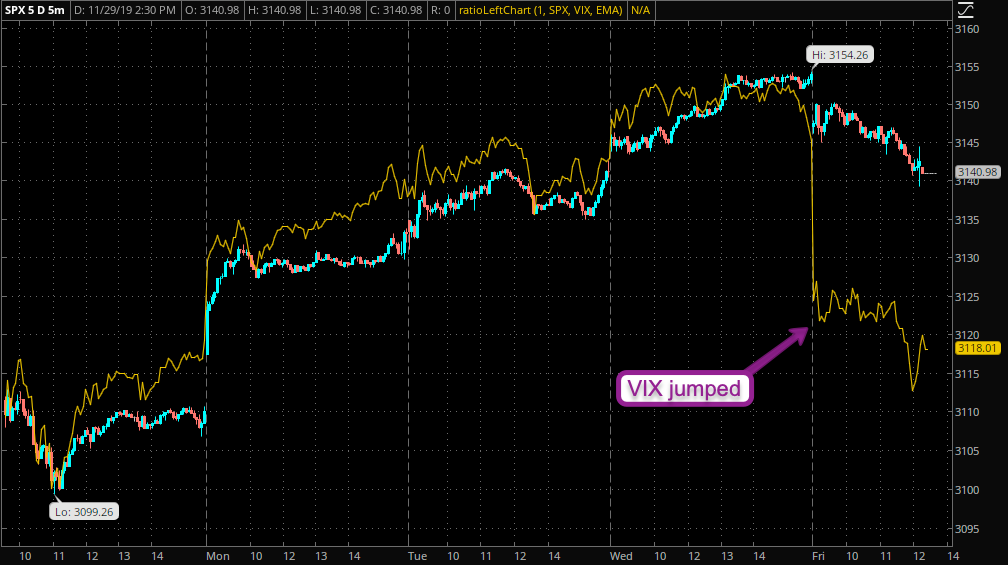 The SPX:VIX ratio started to droop lower late in the Thursday session and then picked up steam on Friday. Not a good sign usually and perhaps we’re getting that shake out a bit ahead of the historical average. 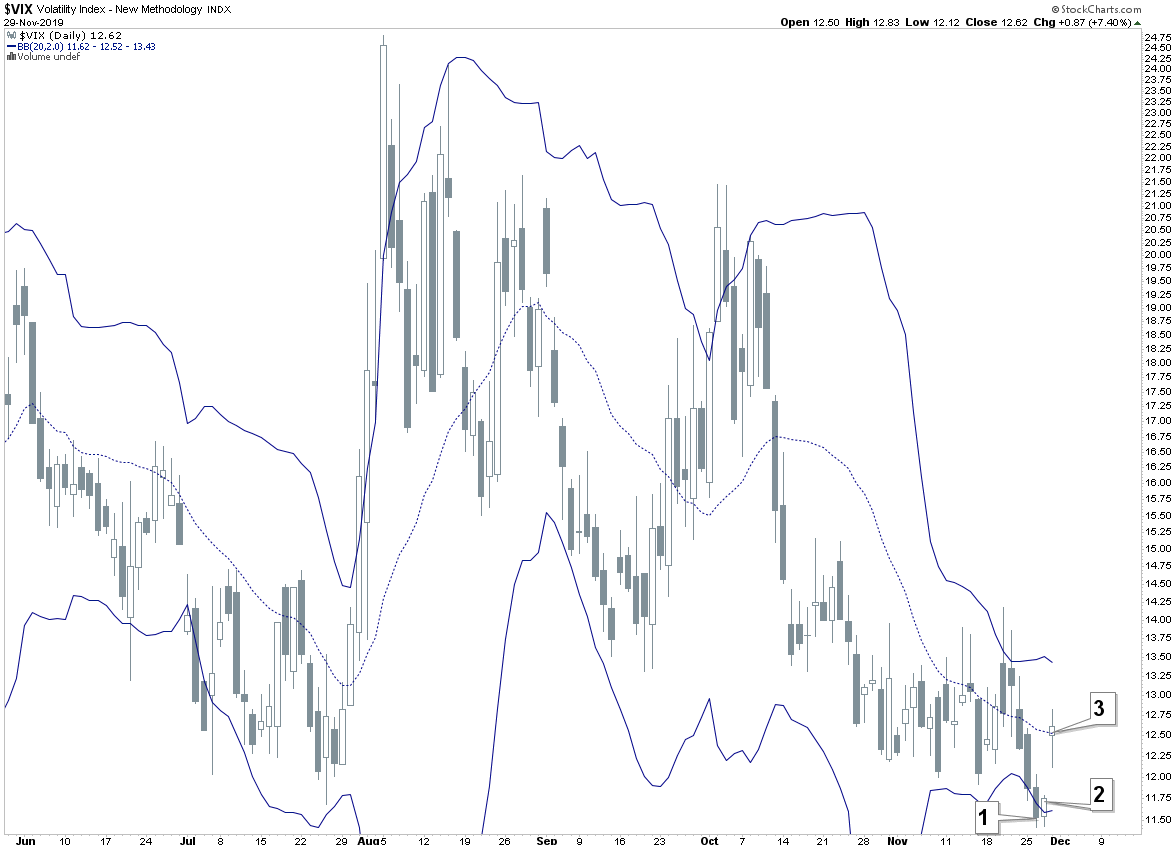 Such a sudden rise off the lows has produced a bonafide VIX Sell Signal – which historically precedes a sell off by a week or so. The timing is right and quite frankly I would be happy to see a new long entry opportunity before Christmas.

Now for my intrepid subs here are the top and bottom performing stock victims for week #49: