The Tale Of The Big Bad Bear

Once upon a time there was a big bad bear who lived deep inside an ancient forest. Very few had ever seen him and many decades had past since the last time the bear had emerged from the sanctity of the forest to satisfy his eternal lust for blood. In fact so much time had past, most of the people living in the villages surrounding the forest started to doubt the very existence of the bear. When reminded by their elders to heed their warnings and to not enter the forest, many youngsters laughed at them and openly professed that the big bad bear was just an old folktale and that there simply was no such thing. For one they had never seen such a beast in their entire life and surely a creature with such wanton lust for blood could not possibly exist without anyone taking notice.

Embarrassed by the constant ridicule of their youngsters the elders eventually stopped talking about the bear and as more time passed the tale of the big bad bear slowly faded away, along with the few elders who still remembered him. Many seasons came and passed while the villages around the old forest grew wealthy and complacent. One day the villagers all got together and proclaimed that old forest was in the way of progress. Many more fields could be planted if some parts of it could be cut down. Plus all the wood from the trees could be used to build more houses, bridges, churches, and to grow the villages into one big city. There was no mention at all of the big bad bear as the knowledge of the old beast had long since been forgotten. In the minds of the villagers it had simply ceased to exist. 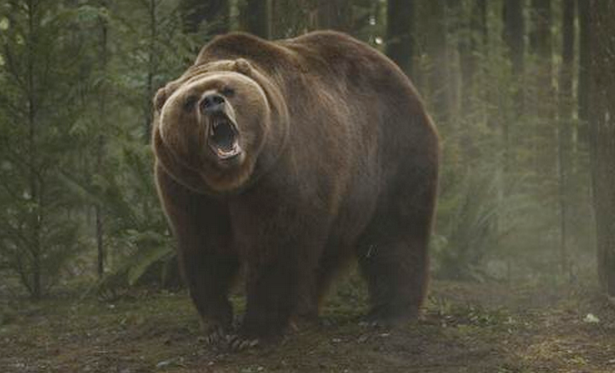 The very next day the tree loggers arrived, eager to finally cease the opportunity to cut down many of the huge ancient trees in the forest. They brought in horses, wagons, and the biggest tree saws ever made, which stirred up quite a bit of commotion and many of the animals living in the forest began to run for their life. Which turned out to be their blessing, because the loggers had decided that the ancient forest was so thick and so inaccessible that parts of it had to be burned down. They laid a few small fires expecting only a few trees to be burned but the fire grew out of control quickly as the old brushwork was so brittle and dry that it acted like perfect tinder. By the time the loggers regained control of the fires a large part of the forest had burned to the ground, only leaving ashes and the burned remains of the unlucky wildlife too slow or old to escape the flames.

Many miles away the villagers were celebrating and preparing to lay claim to the new land freed from the grasp of the old forest. They could see the plums of smoke from afar and were wondering what was going on. So they sent a young messenger to go and inspect the progress of the loggers, then to report back to them. The young man mounted his horse and rode off while the villagers waited eagerly to hear back. Several days passed but the messenger had not yet returned. There was no more smoke coming from the forest and the families of the loggers were getting concerned. So the villagers instructed three more young men to go and search for the messenger and then to report back on the status of the logging.

Three more days passed and the three men never returned. Now the villagers grew very concerned and they decided that enough was enough and that it was time to send in the military. The next morning a company of soldiers rode off with big fanfare and headed toward the forest as the villagers waived goodbye wishing them good luck. A whole week passed and the villagers grew ever more nervous. There was quite a lot of rumors circulating in the village and among many theories on what may have happened the old tale of the big bad bear had once again started to circulate. Many of the villagers ridiculed the very thought and insisted that there must be a more logical explanation as nobody ever had seen such a beast.

The next morning a single solider returned on foot half starved, exhausted, and haggard with great fear in his eyes. He told a story of utter death and destruction – upon entering the forest only a few of the loggers had been found dead and maimed, everyone else had simply disappeared. He claimed that he had fallen behind his company after relieving himself and whilst attempting to catch up suddenly heard screams of terror followed only by eery silence. When he finally caught up with his comrades he found them and their horses torn to pieces with blood and carnage everywhere. In terror he ran off on foot, walking several days and hiding in one of the ancient trees at night. Shivering with fear he had never slept a minute and he swore that he had heard the growling of many bears all over the forest.

See, the old bear had never disappeared and neither had he ever lost his appetite for blood. Many years earlier while hunting he had encountered a sow and thus nature’s instincts took over and produced many more cubs which in turn spawned new generations which spread all over the forest. Neither of the bears had ever seen men or horses and until the loggers arrived had been perfectly happy with the prey of the forest which consisted of deer, rabbits, and the occasional fox. But then the loggers had arrived killing their prey and burning their forest in their boundless avarice. And now, just as many many years earlier, the bears’ lust for blood had been triggered and much of it would flow in the years to come.

Moral of the story: Just because you have not seen the bear for a long time doesn’t mean he’s not out there, patiently waiting to maul your ass when the time is right. 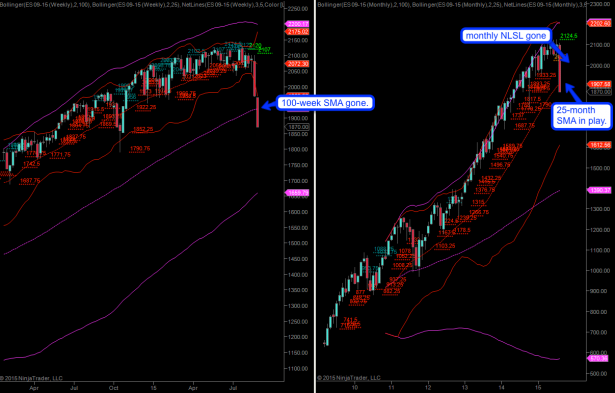 The situation this morning is fluid and things are looking very critical. We may be in crash territory here and I caution you all to abstain from taking positions.Don’t be stupid and step underneath a falling sword here – you have been warned. IF you are short here (I’m actually holding a few contracts as you recall) then bloody well hold them until you see some white candles on the hourly suggesting a temporary floor. There will be a snap back at some point but it’s way too early to even talk about that. I’ll be reviewing the situation as it unfolds and report back. The bear is back and boy is he in a foul mood!