I can’t believe tomorrow is Thursday – this week is going to pass like a freight train. Anyway, I’m a bit pressed for time tonight, so without further ado let’s put the pedal to the metal so we get to tomorrow’s road map. As a matter of fact I typed this report on my lappy while racing down the local highway at 170 km/hr, blasting Rammstein, and holding a camera with my third hand (don’t ask – genetic experiment).

I could hardly balance my mobile phone clutched between my legs on which I was trying to type a text message. The hand job I was getting proved to be way too distracting. Anyway, let’s get to the chart: 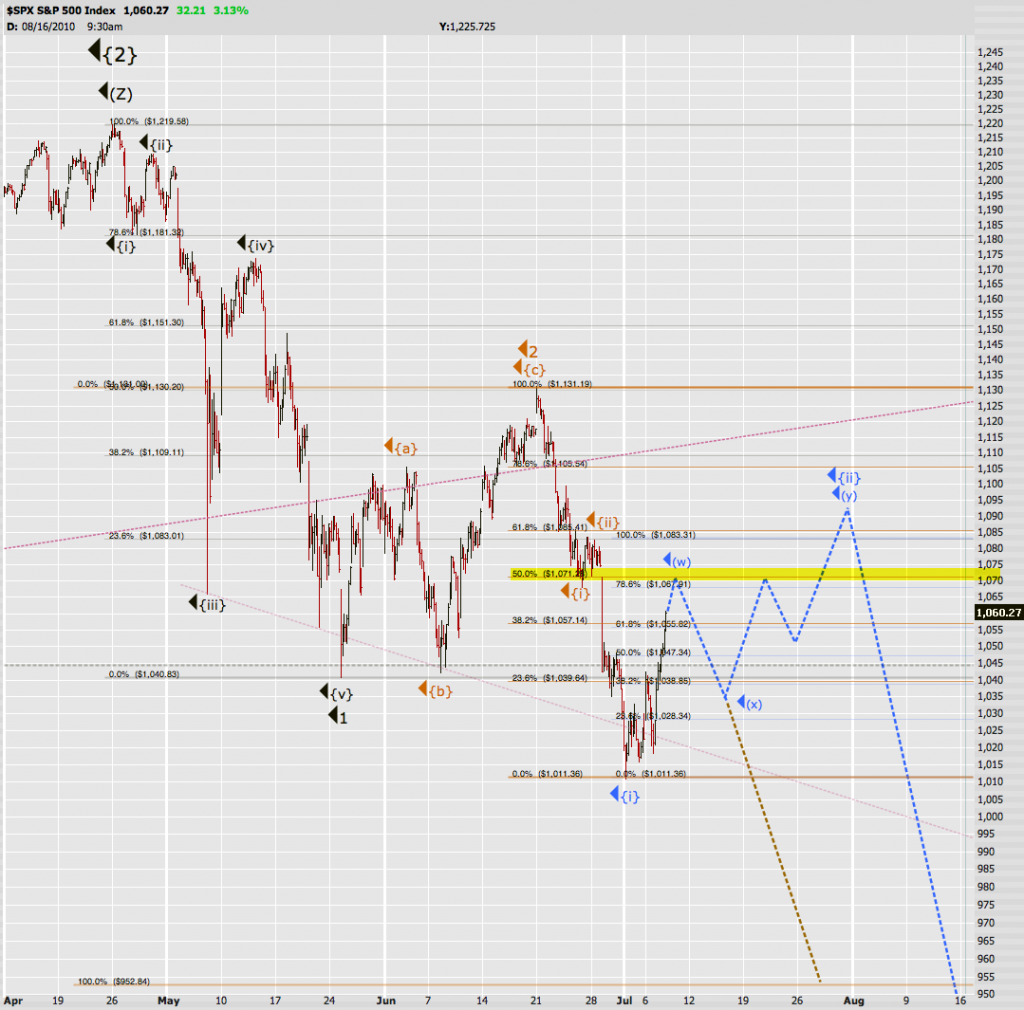 Once again Lucy pulled the ball causing the bears to back flip Charlie Brown style. We are now solidly in Soylent Blue territory and if we are lucky we may get a quick race to 1071, maybe 1075 if the gap fills, followed by a fast drop (i.e. the new Clockwork Orange). Word has it that the ISEE Equities closed at 247 on Wednesday – unfortunately I was not able to verify this conclusively as the current chart does not yet include Wednesday’s close. You may remember the implication – a close above 240 has in the past heralded an approaching sell off (as retail traders usually buy the top). I’ll check the chart in the morning and will update this post accordingly.

However, the cycle charts I am looking at are not as optimistic and I fear a much more protracted retracement as described last night is under way. The DXY is near substantial support and maybe we get lucky when the Euro takes it up the rear once again. However, as the AUD/JPY appears to be the closest correlation on the FX side we may see the Euro drop without equities following suit. Alright, my own brain hurts now, so let’s just stick with what we know:

At this point there is nothing on the horizon that would disqualify our current preferred scenario – which is that we are in Minute {ii} of Minor 3 of Intermediate (1) of Primary {3}. We’ll just have to sit and take the punishment. Should we ramp beyond 1130 (doubtful at this point) that count would have to be changed – but until then let’s stay frosty. Bear markets are tricky and very bumpy – half the passengers get thrown off the bus before it even manages to make it down the first turn. A large percentage of the remaining bears find themselves abandoned at the rest stop because they tried to be too smart and play the swings.

Doing nothing is extremely hard work actually. You have to watch your premiums being cut in half in matter of days – when you relent and go into cash you often wind up watching the tape take off without you. I have had it happen to me – and I swore that it would never happen again. Sitting through the beginning stages of a down leg takes a lot of discipline – so, find the inner German inside you and bring it out. Maybe hone your skills by watching old Hogan’s Heros reruns and start marching up and down like a Prussian. Here’s the perfect sound track for you:

P.S.: Whoever films himself and posts the video gets a free month of Zero goodness 🙂