Welcome To The Jungle!

Most of you reading this today probably followed our markets forecasts on OA last week until ‘blog politics’ pulled the plug on our postings (hey, say that five times in a row – LOL). Now, let me dismiss any rumors right away that it was Jeff who asked us to leave – he did NOT. As a matter of fact he offered for us to post updates in his discussion board, which I consider more than generous. However, knowing the limited amount of traffic in that section of OA, at least during trading hours (and because we’re pansies and like to be difficult), lead us to consider building our own site.

As many seemed to have liked our insights (or the lack thereof) we found it essential that we find a forum where we can post without having to worry about violating someone else’s blog rules. We also didn’t want to hijack Jeff’s own discussion threads, and feared that our postings may not be in the spirit or direction of where he wants to take his site.

There are certain advantages having worked in the software industry for 15 years and I was able to scrape this site together in the last two days. Something I found to be essential was to integrate with disqus since all of our own favorite trading blogs make use of it. This makes it easy for any of you to jump between blogs with the same avatar/id. Before anyone complaints about how much it sucks – this is only a beginning and will obviously be fleshed out by Berk and myself in the days and weeks to come. Assuming we can attract an audience that is – we shall see.

Now, I must disappoint anyone hoping to see an end of the two A/B scenarios. Unfortunately we are still on even footing on both until the rules disqualify one of them. Let me re-emphasize that this situation is not the norm and not some kind of cope-out. As I’ve said over at OA – we’re dealing with probabilities here and unless we can disqualify one of two equal probabilities we need to keep our options open. 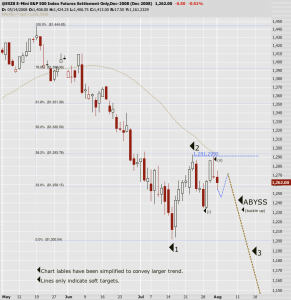 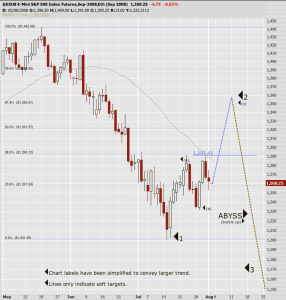 I have updated the charts somewhat, but you get the drift. My shiny new trend indicator on your right is thus set to ‘mixed’ for the short term, and ‘down’ for the long term. What does that mean? Glad you ask! This means that ‘today/tomorrow’ we may go either way. In the ‘longer term’ both charts however show that we will drop hard – thus I’ve set the long term trend to ‘down’. If anyone cares, the possibilities here are ‘up’, ‘down’, ‘sideways’, and ‘mixed’.