The Pain In Spain

No lack of headlines feeding the Euro drama queens out there – which of course makes for some adventurous trading. My weekend warnings regarding the short term seem to have come to fruition. So let’s take quick stock of where we are, after which I have a bunch of juicy setups for you guys. 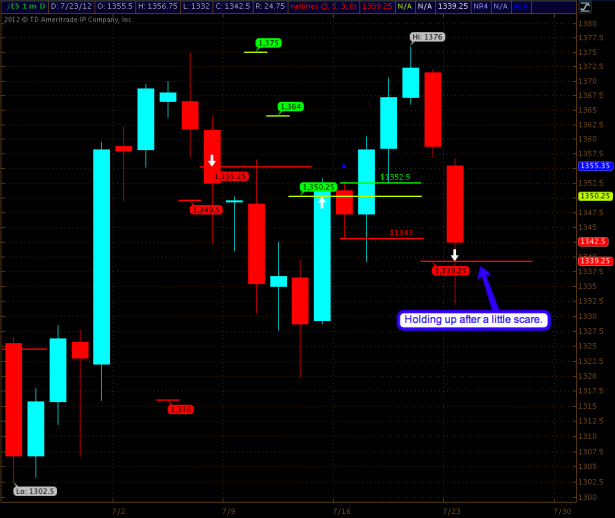 This morning right before the open I sent out an email to all my intrepid subs pointing out the NLSL at 1339. Turns out we breached it and then snapped back right above. 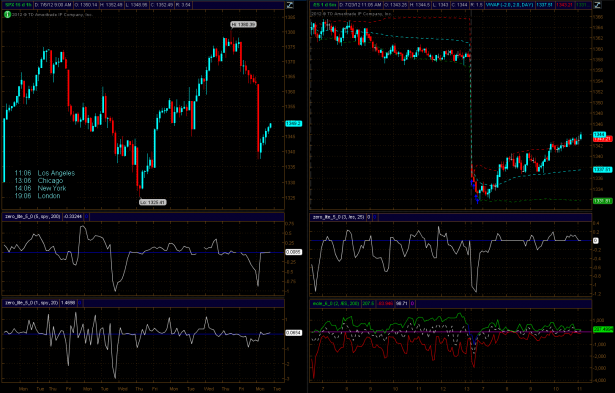 I should perhaps point out that the Mole was painting some nice reversal arrows, congrats if you caught the swing back up. Now, I’m not sure if she will hold as there is new resistance right above that may exert downside pressure. 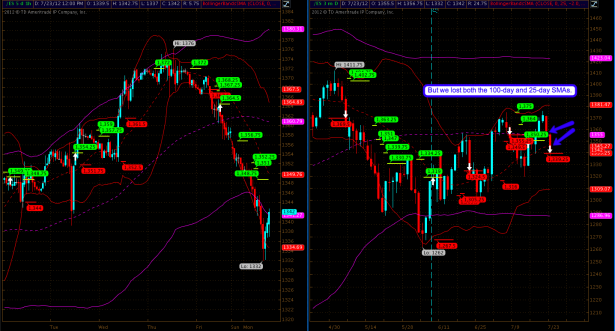 And that is what I am talking about – Friday’s drop got us right to  the Maginot line. Today’s candle however sliced through both the 100-day and 25-day SMAs. The former has been acting as formidable resistance since late April and if we are starting to fail the 25-day now as well things could turn really ugly as both may start dropping. 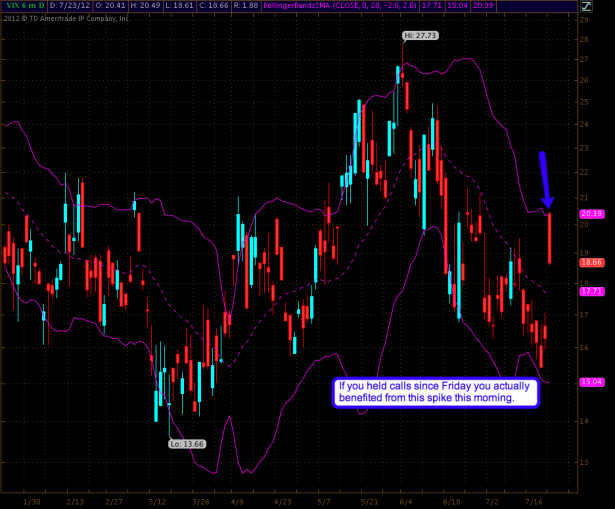 Another must see chart of the day is the VIX – boy – I rarely have seen a jump from one side of the BB to the other within three candles. Curiously it probably was exploding vega that kept a lid on call premiums this morning. And it’s likely that anyone holding calls over the weekend may be in worse shape now than they were at the open.
[amprotect=nonmember] More charts and cynical commentary below for anyone donning a secret decoder ring. If you are interested in becoming a Gold member then don’t waste time and sign up here. And if you are a Zero or Geronimo subscriber it includes access to all Gold posts, so you actually get double the bang for your buck.
[/amprotect] [amprotect=1,13,9,12,5] 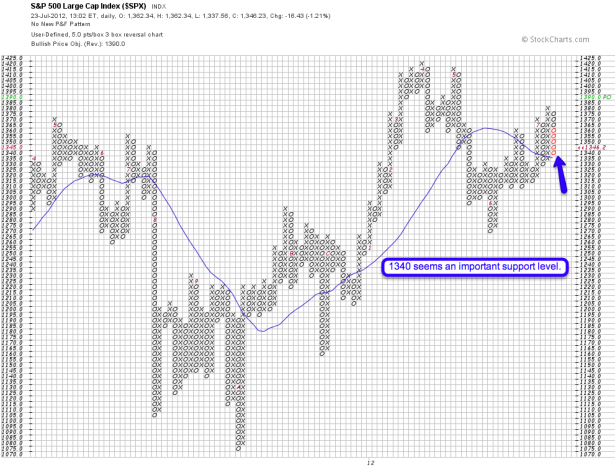 My SPX point and figure chart is still claiming a bullish PO at 1390. However, that will change quickly if we drop through the 1340 inflection point where I see a bit of diagonal support. As you may recall that roughly lines up with our 1339 NLSL on the spoos (which according fair value gets us officially to to 1344). 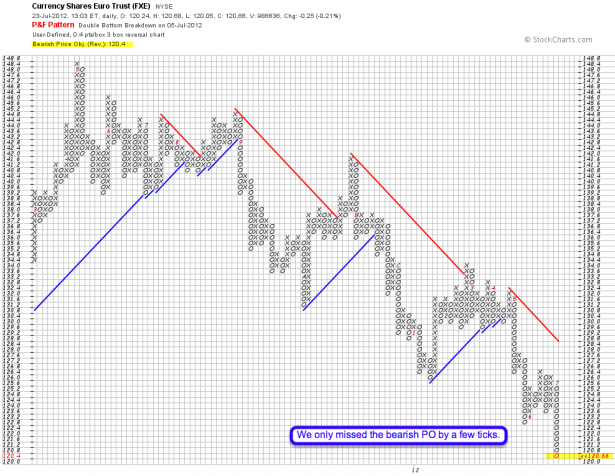 The EUR meanwhile has basically satisfied its bearish PO at 120.4 – we merely missed it by 24 pips. Not a reason to jump into long positions but if you were short then you may want to start scaling out. 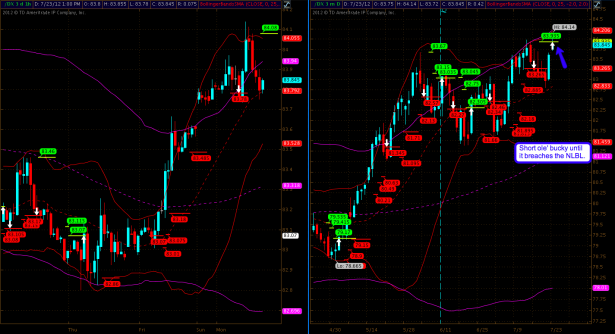 Which brings me to old bucky which is currently battling its NLBL. I think this is a great short unless of course it breaches and establishes new support at 83.935. 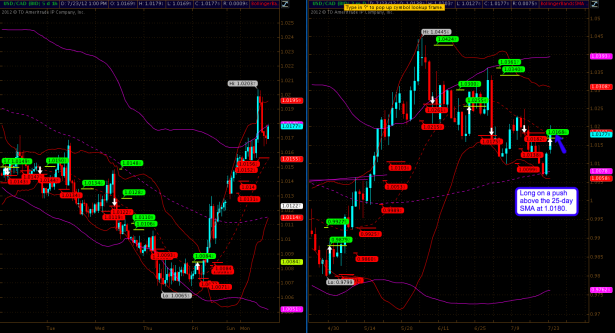 USD/CAD already pushed above its NLBL and it’s a bit late to use that as our entry. But if we get a breach of the 25-day SMA then I think it’s worth a long position as there’s nothing but air above. 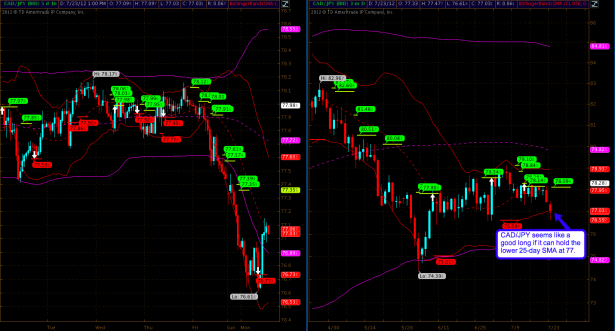 CAD/JPY – quite a drop there but it seems to be observing that lower 25-day BB. It’s worth a tiny long position with a stop just below. Careful – this is not a high probability setup – play it with petty cash only. 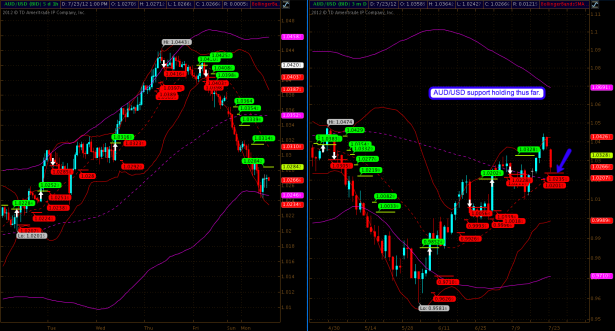 AUD/USD – nice touch and go of its NLSL. And you know what the play here is especially since we have both the 100-day and 25-day SMA right below offering possible support. If she breaches both then flip it to a short with a stop above. 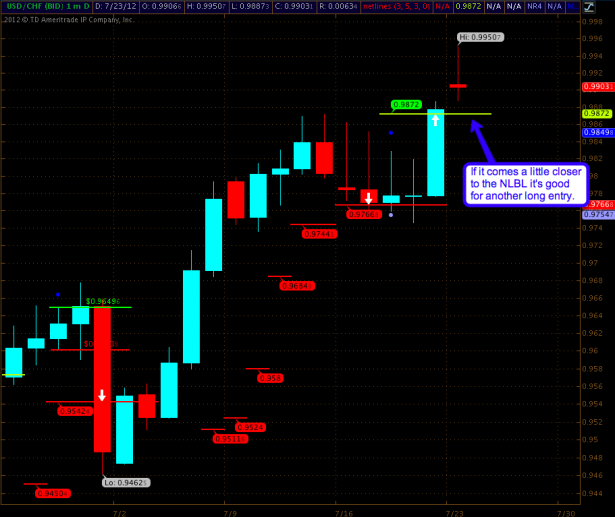 The final contender in our FX line up is the USD/CHF which triggered a long setup on Friday. Came right back today and if she drops a little further then it’s a possible double dip nacho style (i.e. meaning you take on another long position with a stop below the NLBL). 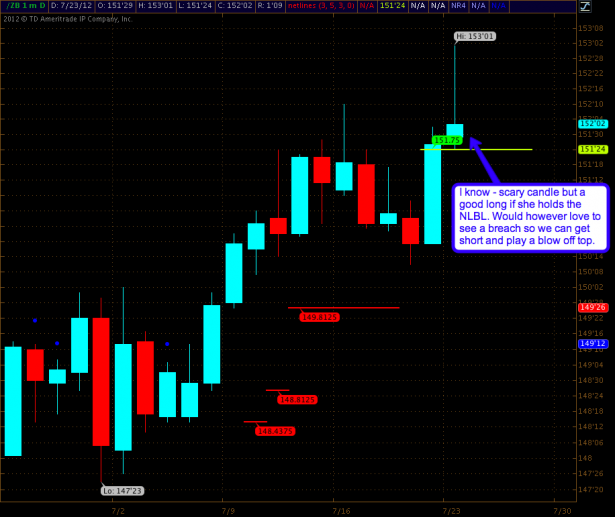 ZB is looking not bullish at all but looks are often deceiving. I would be long here with a stop right below that NLBL – not much risk and worth a bit of funny money. I think very few are going to expect this candle to recover, which is why it just could work. Obviously we are not gamblers which is why we strictly play by the rules. Long here with a top belo the NLBL – done and forget about it until we either make some upside progress or our stop is touched. 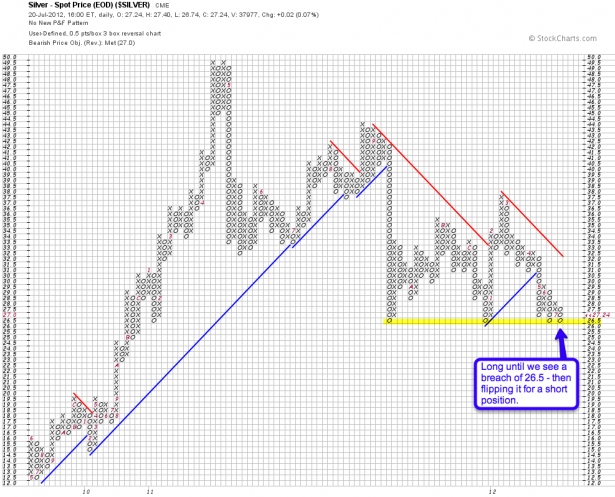 Silver still scraping the bottom of the barrel here. I would stay long until 26.5 is kicking the bucket. Thus far it’s been playing injured and easy prey and the lions are probably licking their chops already. And maybe they are right which is why 26.5 is our Maginot line – if it breaches we could drop lower in a jiffy. 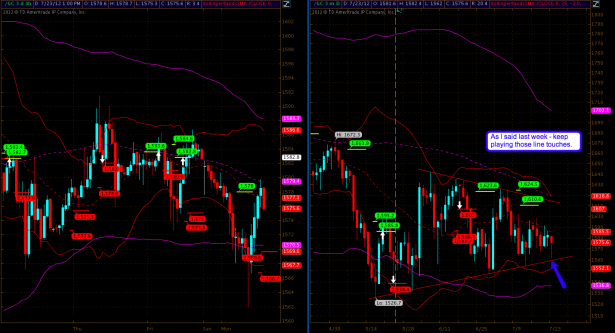 Oh, and remember when I pointed out that sideways triangle on gold last week? I hope you kept an eye on it as this was a great spot to dip back into long positions this morning. Until it breaches this is an easy play – I would give a few handles and then take profits as it has been in sideways mode.