There has been some chatter regarding the EUR/USD in the comment section and I thought that a longer term version of ZeroFX I’m also running on a separate screen may be of service to anyone pondering what’s on the horizon: 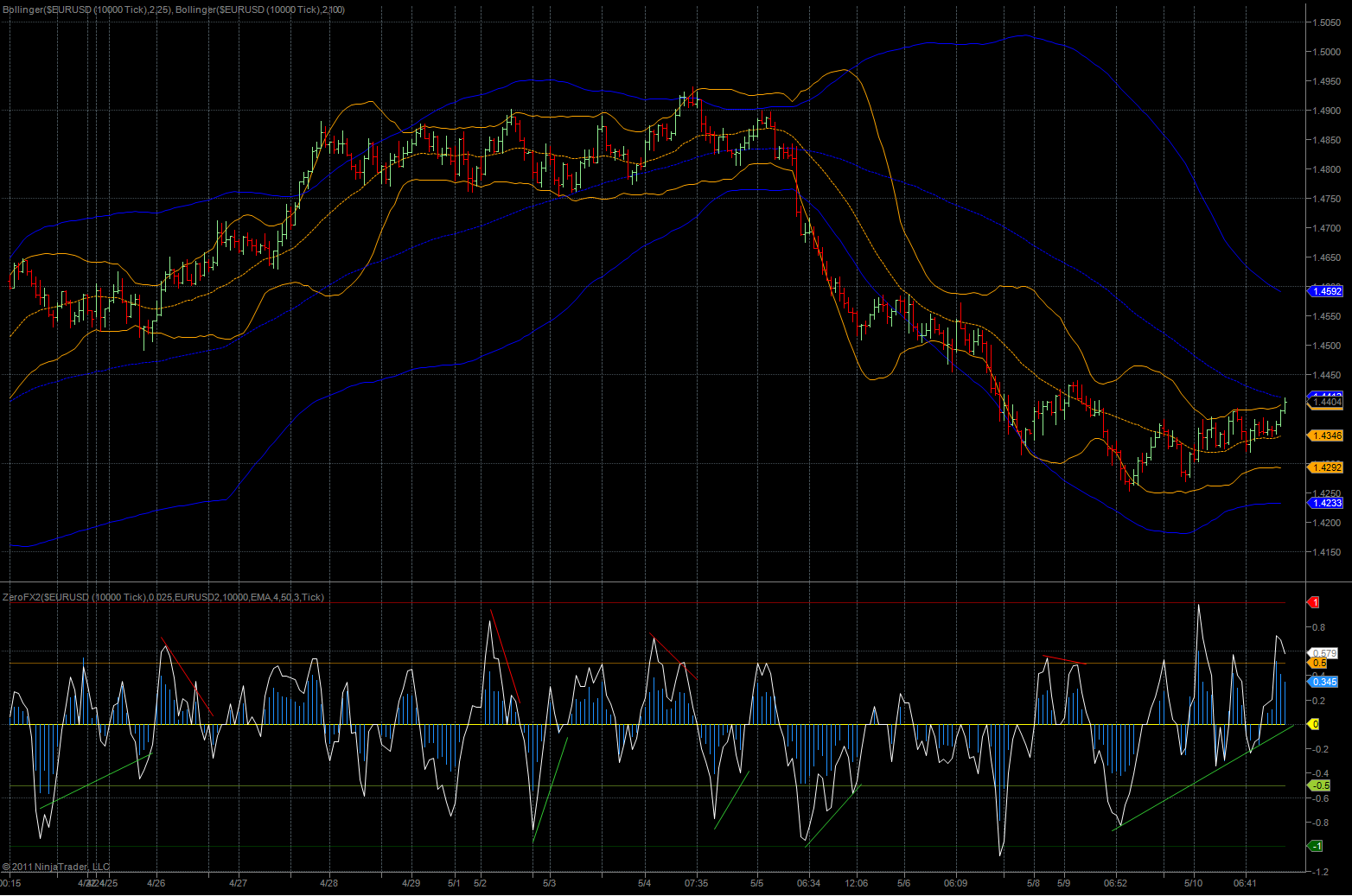 It’s a big chart, so you may want to click on it. What you are looking at is a 10k tick chart which produces only a handful of candles per day. It’s a bit more sensitive than an hourly chart but only when needed, meaning it fades the non-participation sideways stuff.

What I’m seeing here is of course not conclusive but as I saw comments along the lines that ZeroFX ‘was not buying the rally’ I felt that I should share are more longer term perspective. Maybe the signals on the 4kT or 1kT charts are currently not significant but that only means that on those time frames the edge of picking a direction is not conclusive. Let’s always remember that any edge offered by any of the Zero indicators lies in selectively pointing out conditions in which the odds of a reversal (or continuation) are elevated.

Think about that for a second.

Many of you look at at chart like the above and consider it to have a limited edge because it does not accurately predict every swing in the tape via a divergence. Especially when it comes to FX that would be almost impossible due to a myriad of factors I don’t have the time and energy to explain here. My point however is that by carefully observing the signal you can derive repeating conditions in which reversals appear to happen a majority of the time. Divergences are only one tool provided by ZeroFX. Another recently discovered tool appears to be blue line (and also white line) spikes beyond the +/- 1.5 mark on the 1kT and 4kT charts (currently running as ZeroFX) – I am now very confident that there is a very clear edge there but have imposed a multi-week monitoring phase on myself and anyone else watching it. In essence I want to be completely sure it’s real before I go and pursue this further.

Anyway, back to the current trend on the Euro. The 10kT chart however appears to support the notion of a consistent updraft and I would be careful with short positions once that 100-MA line is breached. Of course until that happens this may be a good spot to take a contrarian position but I would still recommend you watch the 4kT chart for blue histogram exhaustion spikes (i.e. vertical blue lines that exceed 1.5+ or more) – those have often preceded course corrections since I started to monitor ZeroFX. 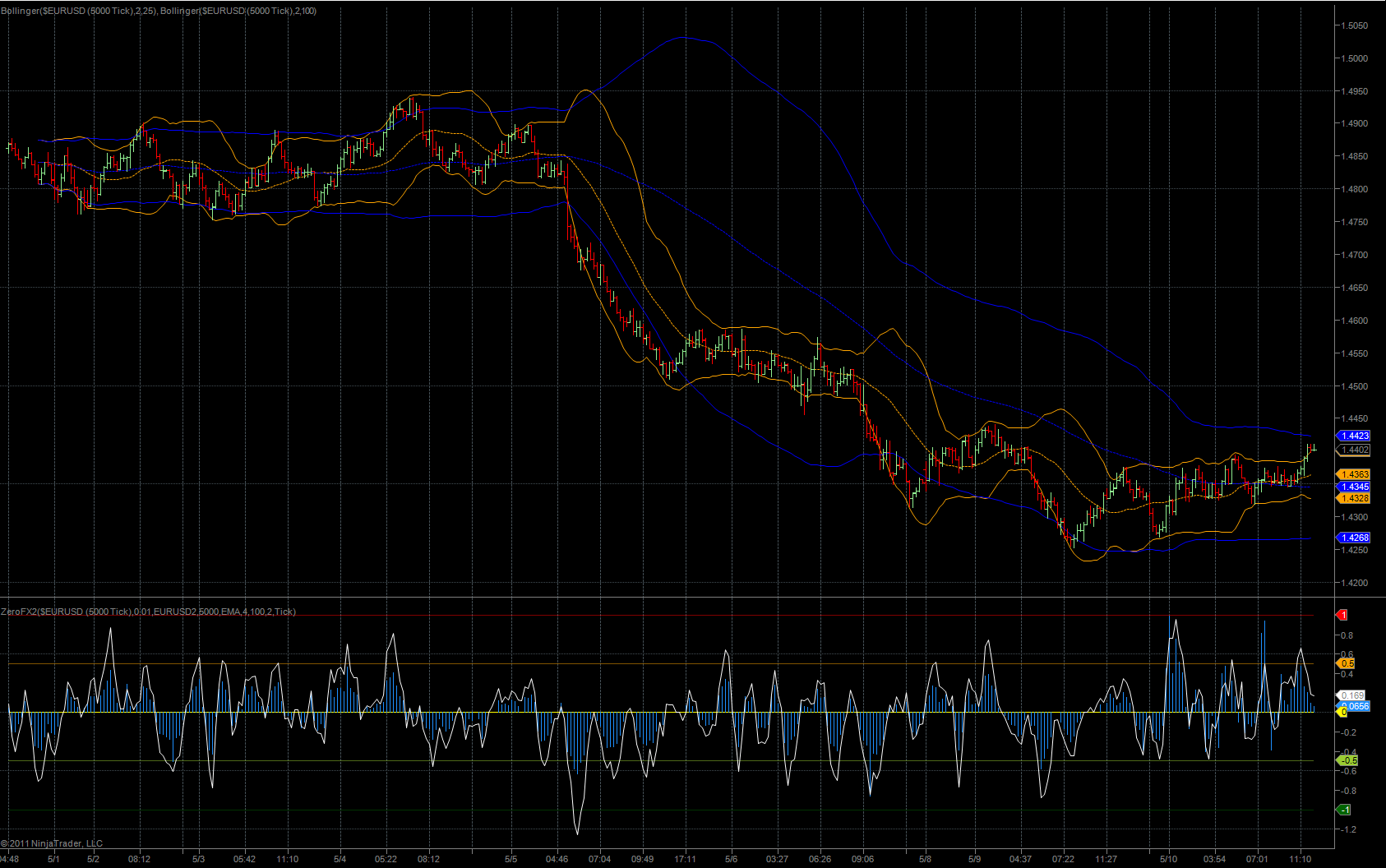 Here’s my 5kT chart for good measure – the picture is similar on the signal side and I would not exactly call this bearish. BTW, on the 5k chart we are now approaching the upper 100-BB line and that may also be good for a reversal.

My future plans for ZeroFX include some type of email alert notification system that triggers when spikes beyond +/- 1.5 happen. I imagine it would make sense to provide that as a service on several time frames – short, medium, and long. So perhaps the 1k, 5k, and 10k charts may be the best candidates and subscribers could then pick which signals they would consider for their FX trades.

Any (intelligent) input would be appreciated, as usual 😉