Bitcoin And The Trough Of Disillusionment 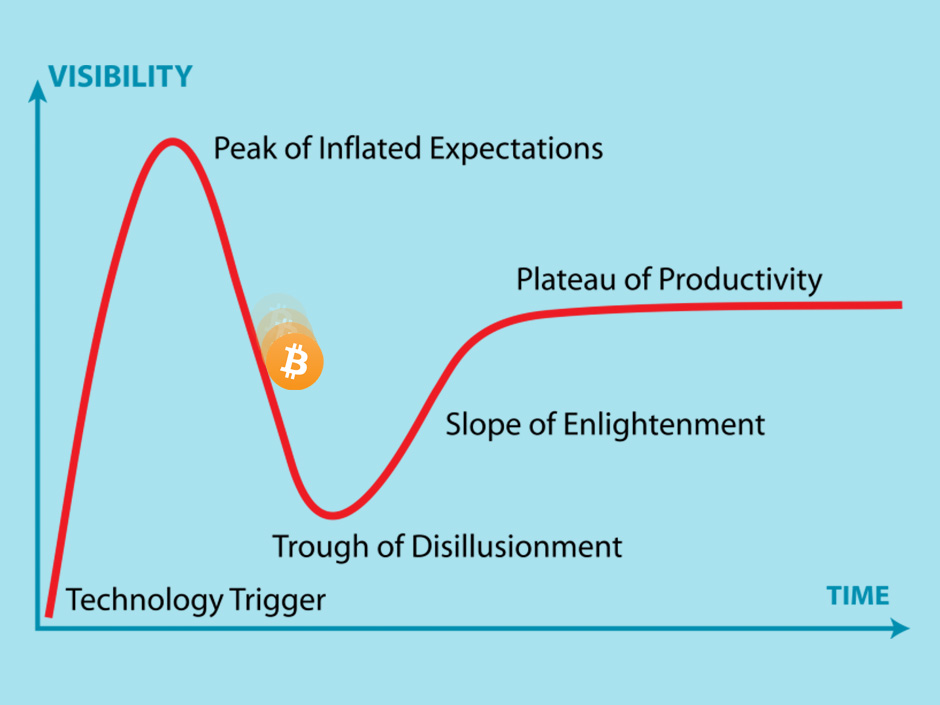 I hope you all had an eventful Memorial weekend, yet still managed to spare a few minutes of appreciation for our proud fighting men and women, here at home as well as abroad, in times past as well as at the present. Wherever you went, I hope it wasn’t Chicago.

I for one spent my time away from the blog productively by putting the finishing touches on a new intra-day trading system I have been developing over the course of the past year in collaboration with another quant. It takes advantage of recurring IV inefficiencies in pertinent ETPs, and after hundreds of hours honing the system we are very excited about finally being able to deploy it live.

Releasing a new system is always accompanied by a mix of emotions as it, per Murphy’s Law, will invariably head straight into a losing streak. Once the training wheels are off it is however exciting to see if reality is inclined to live up to theory. What’s most rewarding to me are all the things I learned in the process and the new skills I picked up, all of which of course will feed into future system development.

System traders truly are like sharks but not in the fashion the gullible public would like to believe – rather in that stagnation without fail eventually leads to death. Trading the financial markets has always been and will continue to be an arms race, but it is one I deeply enjoy as it is one of the few remaining niches of life where good intentions without skill or talent mean nothing, while hubris, arrogance, and herd behavior are usually punished instantly and most severely. I personally wouldn’t want to have it any other way.

Now while markets are starting to catch up after a low participation pre-holiday week of annoying whipsaw I thought I’d get us started with some musings regarding the drastic change in sentiment we have witnessed across all things crypto over the past six months. Whereas you could easily find yourself being tarred and feathered and then carried out of town on a rail by merely suggesting the possibility of a  corrective phase in crypto currencies as late as mid December 2017, it’s hard to find anyone who’s bullish crypto these days.

So, what happened? Well, if you believe in the Gartner hype cycle, Bitcoin and the entire crypto space by extension entered its peak of inflated expectation in early 2018 and has since descended toward the trough of disillusionment. Now wait a minute, what exactly is a Gartner hype cycle and where can I buy one? Wikipedia defines it as:

The hype cycle is a branded graphical presentation developed and used by the American research, advisory and information technology firm Gartner, for representing the maturity, adoption and social application of specific technologies.

Of course none of this is completely new. Having followed technology for over 30 years now this reminds me a lot of the technology adoption curve described by Jeffrey A More in his 1991 book ‘Crossing the Chasm’, which was all the range back then. Where the Gartner curve differs however is in not focusing on discrete segments of population, (e.g. early adopters, majority, and laggards) but in outlining the progressing of perception and the hype that accompanies a particular concept or technology.

To be clear, the Gartner curve does not reflect an inherent quality of a particular technology, idea, or type of business, rather its premise lies in quantifying our collective perception of technological progress as well as that of its future value. Now wait a minute – future value? Doesn’t that sound a lot like the basic concept all futures markets are based on? Well, if you believe the hype then yes! (pun intended) 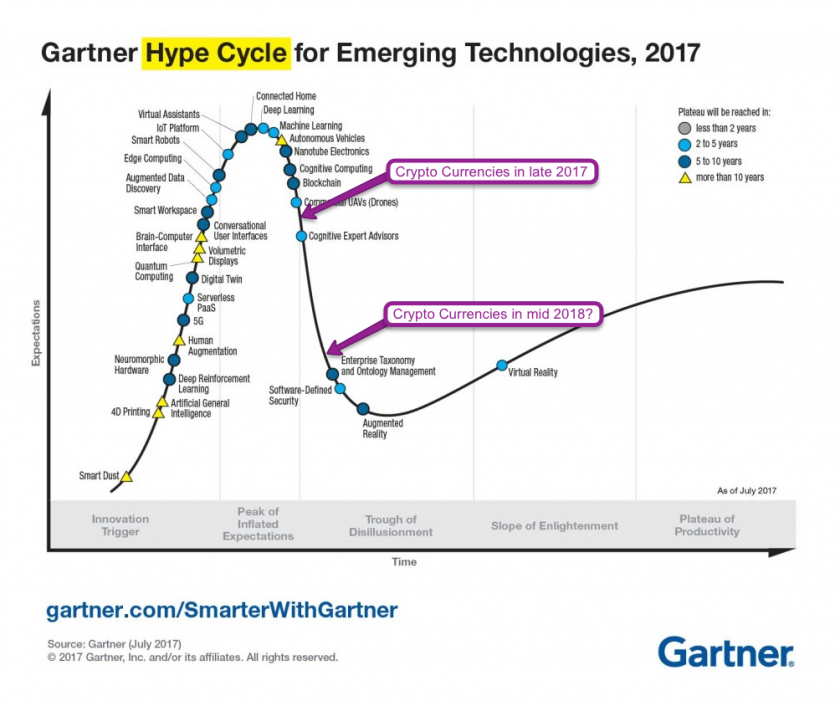 The graph above shows Gartner’s 2017 hype cycle for emerging technologies and at that time (July 2017) blockchain had already progressed far beyond its own peak with Bitcoin most likely already leading it lower. The underlying reasons for that are plentiful and most likely better explained by analysts more keyed into the crypto sphere as a whole.

What I see personally is a phenomenon that I see regularly in the financial markets, which is a trending phase based on hype, a big shake out that punishes the late comers and greedy pigs, followed by an extended mind numbing corrective phase. All of which eventually leads into less volatile and more mature long term growth until the onset of the next hype phase. 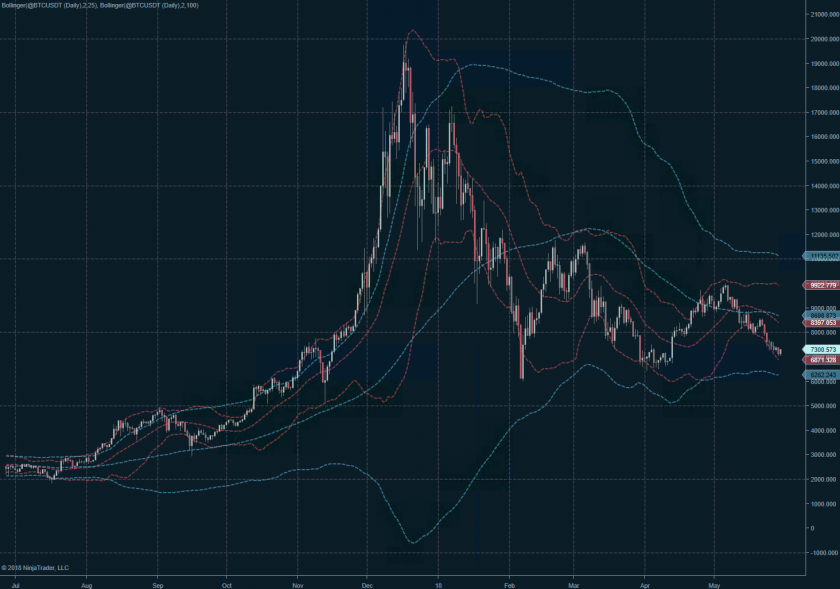 Which of course brings me to Bitcoin, the actual financial currency many of us have been using, accumulating, and trading over the past few years. One would have to be blind not to see a pretty convincing correlation there. I did not find a bitcoin specific hype cycle issued by Gartner but given that the hype around Bitcoin was leading the somewhat delayed blockchain hype by at least six months if not a year, it’s rather interesting to realize that Bitcoin must have been pushing past its own peak in the Gartner cycle way ahead of the its market peak in early December of 2017.

I’m not surprised there would be a significant delay between max hype and valuation, because that seems to be the nature of things. And once you start to recognize the underlying characteristic of a hype – pure greed mixed with unbridled optimism, it actually becomes quite easy to pin a bubble when you see one.

For there is nothing truly new under the sun. To make that point here are some seminal thoughts posted in Fortune magazine in 1996 (several years before the big 2000 dotcom crash) in reference of the 1929 crash, and by none other than John Rothchild, one of the direct descendants of Nathan Mayer, Freiherr von Rothschild the person who probably stands as our archetype of evil speculation:

JOE KENNEDY, a famous rich guy in his day, exited the stock market in timely fashion after a shoeshine boy gave him some stock tips. He figured that when the shoeshine boys have tips, the market is too popular for its own good, a theory also advanced by Bernard Baruch, another vested interest who described the scene before the big Crash:

“Taxi drivers told you what to buy. The shoeshine boy could give you a summary of the day’s financial news as he worked with rag and polish. An old beggar who regularly patrolled the street in front of my office now gave me tips and, I suppose, spent the money I and others gave him in the market. My cook had a brokerage account and followed the ticker closely. Her paper profits were quickly blown away in the gale of 1929.”

Are we at the same fatal stage in the market today, when people who aren’t expected to have stock tips have stock tips, including hot dog vendors, shoeshine boys, the homeless, pedicurists, barroom dancers, toll takers, and the trumpet player at the racetrack? Will stock prices fall off the cliff under the weight of enormous popularity?

And as we all know today, yes – they would and then some.

Out Of The Ashes

Now what follows the bust is usually a sobering period of normalization and I mean that in a very literal sense. After the hype and the ensuing loss (monetary as well as public attention) what usually remains is the true potential of a technology or idea. Which then either is abandoned, displaced, and forgotten – or it serves as the fertile ground that feeds into the rebirth of the Phoenix, but this time with slightly trimmed feathers, and a height ceiling 😉

Whether Bitcoin and crypto in general will be heading into a more sustained long term future of course remains to be seen. I personally hope it does as I, despite my nefarious personal disposition and obvious character flaws, see a true benefit in the direct unfettered global exchange of financial value and information. And somehow I have an inkling that I may not stand alone.