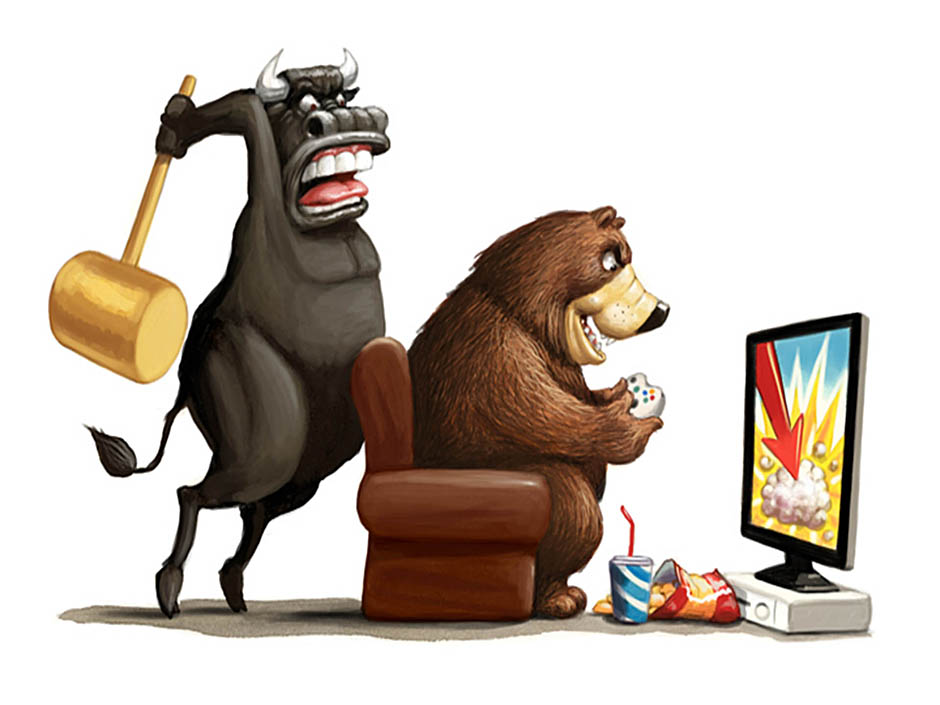 Once again we are staring down the abyss and given a decade filled with bearish disappointments it’s easy to resort to recency bias and once again expect a long reversal. And right out of the gate let me assure you that the odds probably still favor the bulls here.

BUT, and it’s a big but as you can see – the bears do have a small but real chance right now and right here to inflict some major damage. As always the Mole doesn’t make lofty claims without backing them up with a bit of technical evidence. So if you don’t mind – shall we? 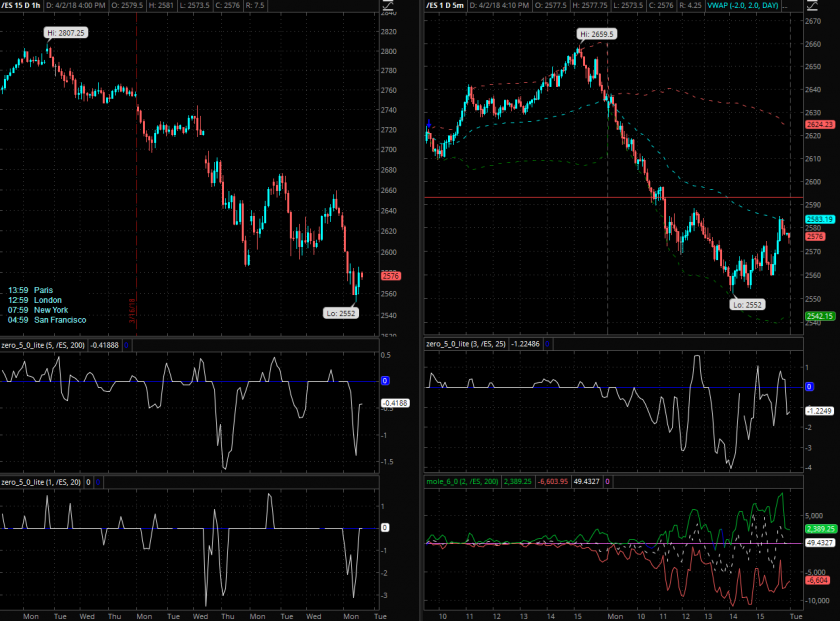 Let’s start with the low hanging fruit which is the Zero which I consider the ultimate market participation indicator. Clearly the Friday session was nothing but a massive sell off and we can see ever increasing selling pressure on the right 5-min signal.

Yesterday however there were hints that buying pressure was making itself felt again, especially into the close. The E-Mini has managed to cling to its meager gains overnight and we may see a more confident push higher during today’s session.

That said, until ES 2650 is breached any rips higher IMO are nothing but short selling opportunities. The odds for conclusion may be low but the payoff could be massive.

BTW, if you’re not a Zero or Gold sub then now would be a great time to remedy this unfortunate situation. Point your browser here to get access to more in-depth market analysis and many juicy setups on a daily basis.

Okay, now that I told you the how let me show you the why. 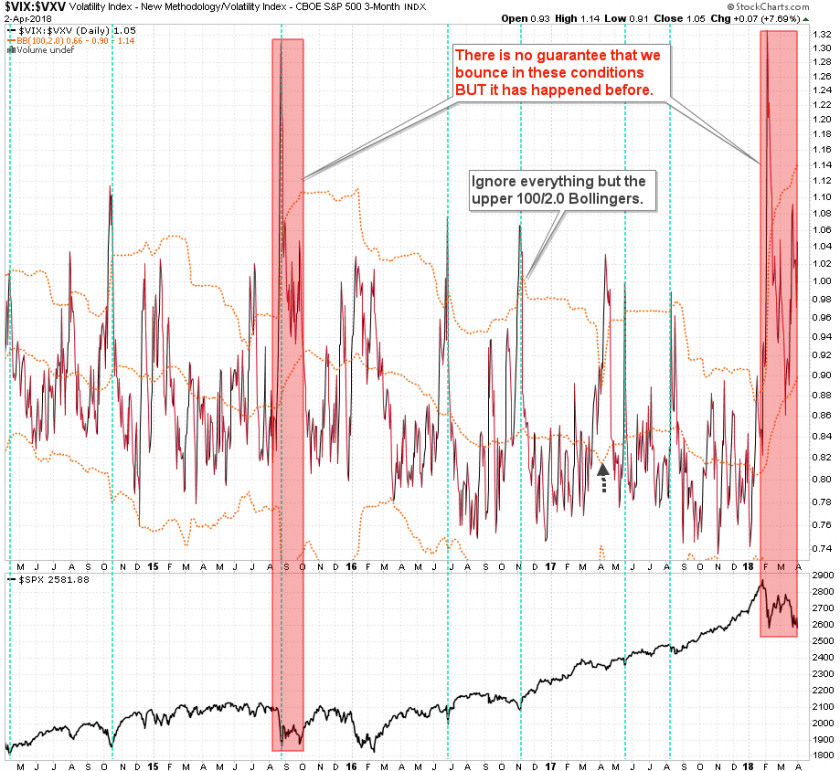 Let me start you off with the most bullish momo chart in my current arsenal. The VIX:VXV ratio over the past few years and usually I use that one for long reversals. Except that there isn’t one right now, given that the upper BB has punched so much higher.

What I’m seeing however here is a formation that in 2015 which resembles today’s quite a bit. The main difference is that what preceded the prior one was a lot less exuberant than what we saw all the way into late 2017.

And of course that in some ways also bolsters the bearish case, but it would be foolish to discard the fact that a similar formation resulted in a massive short squeeze that lasted almost a month. 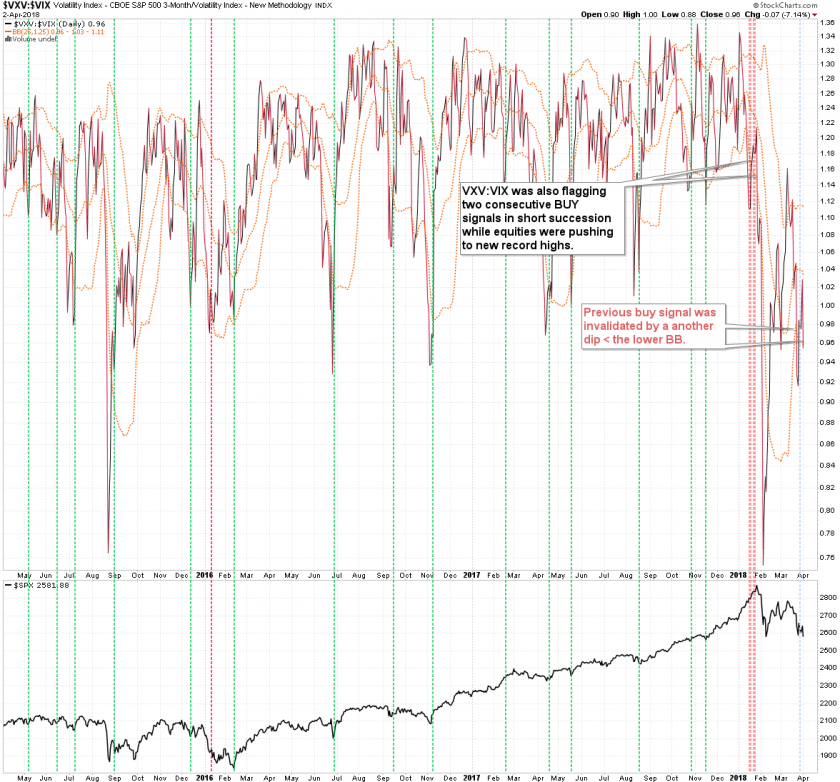 The same ratio but this time a little zoomed in and inverted, so we are looking at the VXV:VIX. The reason why I do that is that it better visualizes the type of formations I’m mostly interested in. And in this case what I am interested in are long reversal opportunities.

Do we have one right now? We sort of got one over a week ago but it was reversed this week by another dip < the lower BB. That’s pretty damn bearish if you’d ask me. Which you do by reading this I guess 😉

Quite a lot more waiting below the fold – not a post you want to miss out on: