I’m going to cover two important topics today which both relate to realized volatility (RV) and in particular how to trade your way around it. If you’ve been a trader for a while then you probably have noticed that volatility profiles differ substantially on the short term when compared with the long term. In essence volatility has a tendency to decrease toward the long term. Nevertheless many traders treat those charts the same when designing their systems, e.g. how and where they enter, where they place their stop loss, and how they handle campaign management.

The shorter the time frame the closer people seem to be placing their stops, which of course is directly related to the visual perspective at the current time when observing for example a 30-minute or hourly chart. And that’s fine if you’re a scalper and have defined a statistically proven edge accordingly. But of course RV can still affect your campaigns in ways you didn’t expect. And those in particular can often lead to frustration and anger, both very detrimental to keeping an even psychological keel on a daily basis. 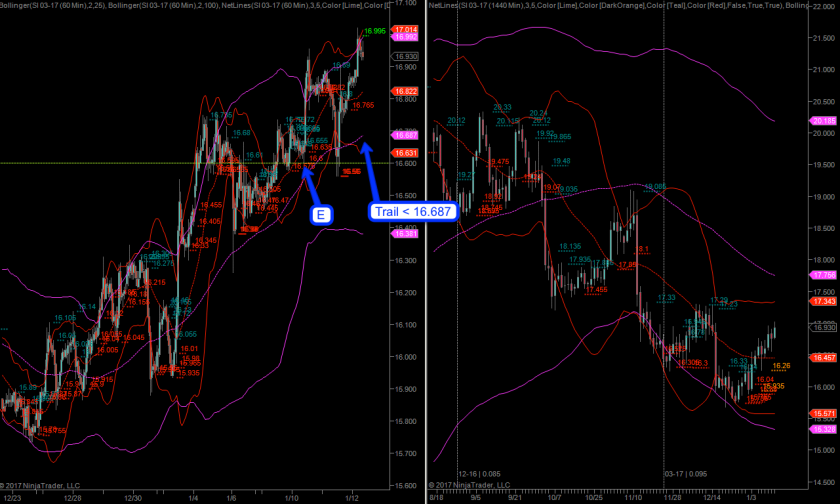 Take silver for example which we entered two days ago and yesterday I suggested that we advance our stop loss to near break/even. Now it’s quite possible that your entry was near mine, e.g. the 16.6 mark and if you trailed it with a regular stop and got taken out just before it turned on a dime and headed back higher. If that’s you then don’t feel bad – silver is a naughty and most difficult (and may I say expensive) contract to be trading and it happens to the best of us.

However there are ways I employ to protect myself against stop runners, in particular in contracts like silver, crude, and even the spoos. First up you can be more conservative and always place your stops below major spike lows. That helps but retests often drop a few ticks/pips below them. So what to do?

The lazy trail is something I implemented into an older version of Scalpius a year or two back and it actually worked exactly as hoped in alleviating the damage done by stop runners and genuine retests. Basically the way it works is based on a timer. As soon as your stop level is reached the timer triggers and once that timer runs out (10 seconds or 10 minutes later – based on your setting) your system exits if price is still trading below your set threshold. Alternatively your timer can also be counting down based on ticks, so every time price ticks below it deducts one all the way down to zero where it finally executes. That is actually the technique I used and it worked well, especially on trend trading systems that remain active for days or even weeks on end.

The closed trail is even simpler and can be equally effective. Your threshold is only observed on candle roll overs, it doesn’t care about what happens in between. Which makes it very easy to code into an automated system incidentally. The idea here is to prevent exactly the types of shake outs that happened yesterday in silver. You may have noticed that 16.6 was touched but it never closed at or below it. And if you look at the left panel above then you’ll notice that especially silver does this stuff on a constant basis. So if you use a regular stop loss order then you’ve probably been missing out on juicy profits on several occasions in the past.

Of course both of these approaches require you to set a regular stop a reasonable distance away, which is your emergency exit in case of wild market fluctuations. That can be your ISL or it can be something else – it’s up to you. Just make sure it’s a market order so that you get filled when things start getting ugly.

Finally don’t ever use any of those fancy stops for your ISL – I recommend that you only facilitate them during your campaign management, and more specifically for trailing. 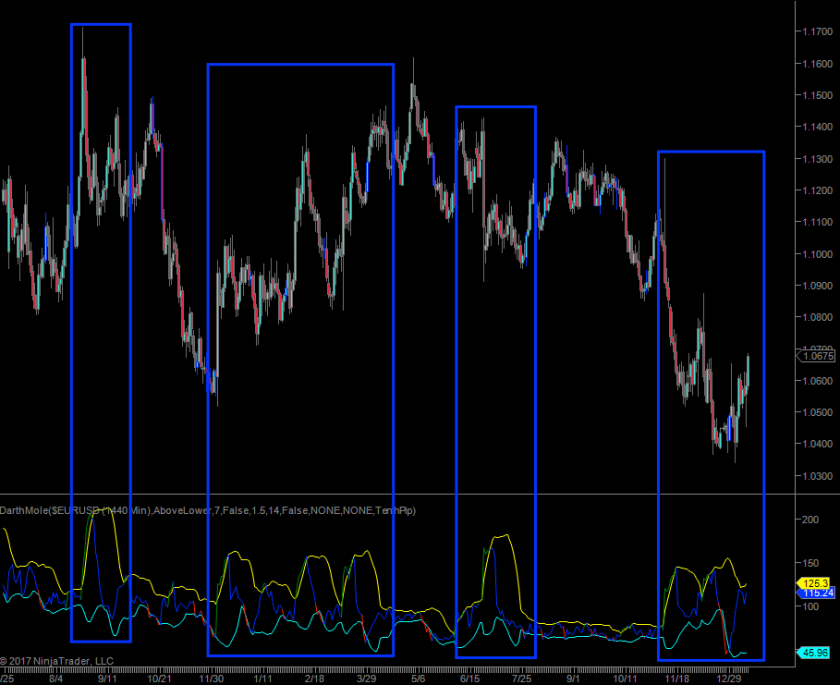 Another crucial but rarely covered topic are RV cycles and in particular sudden spikes. There are symbols which just happily chug along with the occasional spike here and there. And then there are the ones which have perfected it to a science and in the process inflict much misery and monetary losses especially on the retail trading community. Take the daily Euro for example as shown above. I have highlighted some of the wilder swings although it’s been one nasty ride here for over a year.

Now the other day I read an interesting page on the health impact of Bluetooth radiation and learned that it’s actually the rapid rise and fall times and the rate of change of the fields that inflict most of the biological damage. Wait a minute – what do Bluetooth pulses have to do with trading the Euro again? Well, absolutely nothing except that the Euro currently behaves like a giant pulsar. Not only does it change direction erratically and for no (apparent) reason, it also suddenly starts trending (as shown by the compressed bands in the lower panels), only to suddenly start flailing around again. But it’s the sudden phase changes (the changes in volatility) that really get you and is guaranteed to smash most trading systems into smithereens. If you’re trying to scalp then the trends will shoot way past your mean reversion zones, and if you’re trying to trend trade then you’ll be suddenly whipsawed to death.

There are three simple lessons here to be learned: 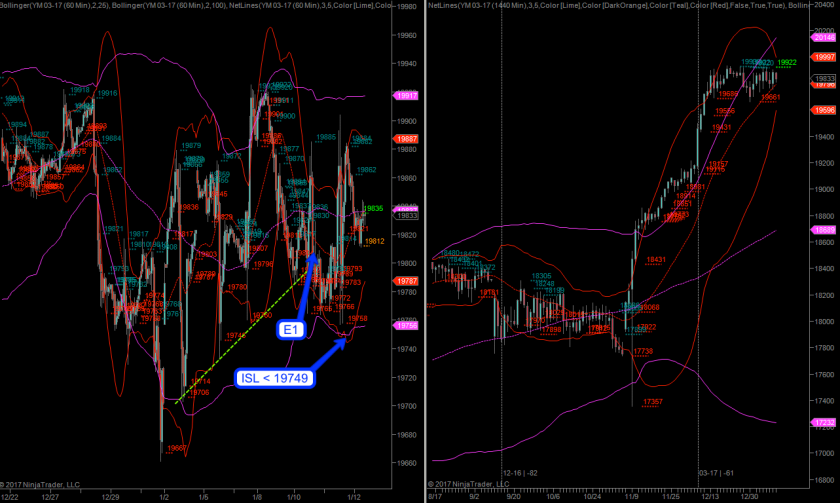 Alright, quick update on our Dow futures campaign. If you were a sub you should be in this one. We actually barely escaped a stop run on this one as well (even with a regular stop) and I think I’ll be leaving the ISL in place for now. If it takes off then it should happen soon – recall that Monday is MLK day so we’ve got today and a few morning hours tomorrow before everyone calls it a long weekend.

One more setup below the fold: