When equities turns volatile each added gyration serves to stir the collective emotional cesspool of market participants. An unfortunate cognitive bias we as human beings all share is that we tend to see mostly what we want to see, facts, evidence, or reason be damned. Also known as ‘confirmation bias’ this factory installed feature of the human condition seems to particularly live up to its promise when it comes to the trading racket. Throw in a few wild swings and the bulls will regard each drive lower as an obvious dip buying opportunity while the bears see it as clear confirmation that the prevailing trend is weakening. 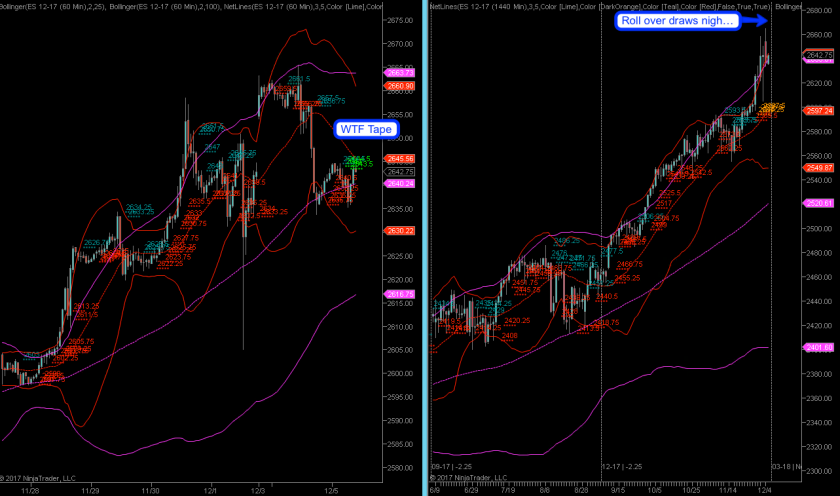 The two exceptions are on hand the market makers, who frankly only care about extracting a narrow but consistent edge somewhere between the two camps and are otherwise concerned with keeping liquidity flowing. And then there is the growing legion of trading bots which intentionally infuse volatility in order to lure mainly human traders into making bad decisions. Which judging by their quarterly revenue reports seems to be paying off in spades and then some. In some respect they are not really trading the market per se, they are trading based on your emotions. How does that make you feel? 😉

So if you look at the E-Mini chart above and have little doubt as to where it’ll swing next, well then you may want to think again. We’ve seen many shake outs like these over the years and they seem to concentrate especially around periods right before major futures contracts roll over. And unless you know what you’re doing it’s best you hide or get out of the way. Also remember that next week is statistically speaking the second most bearish of the year (as reported yesterday) and given the roll over date I’m pretty sure that’s no coincidence. 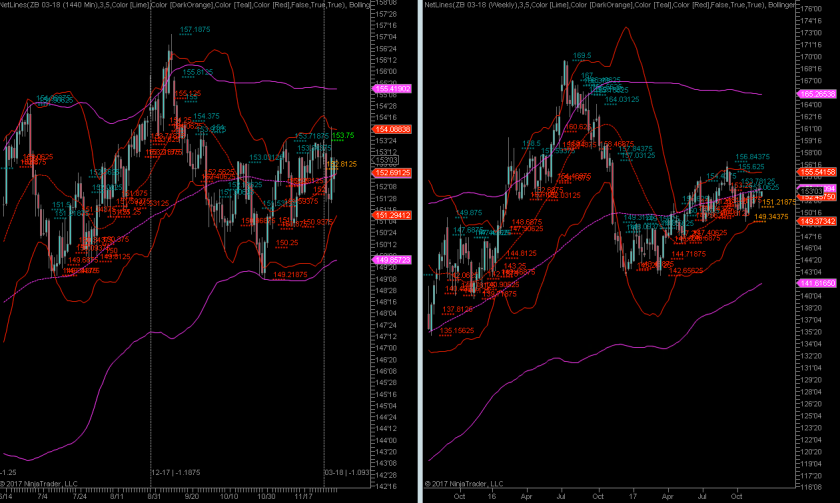 Here we have another example, the 30-year bond futures. Which in my mind is a pretty bullish looking contract but where confirmation bias may reign especially high is not so much on the price but time dimension. Bonds have been coiling up for the better part of this entire year now. We caught a few spikes higher but reversals continued to limit our profit potential in this sector. Which most likely now is what leads us to expect more of the same. We see a sideways market, and after a few campaigns have internalized that bonds will remain in a sideways pattern. Once again volatility, but this time in small extended doses, is what conditions us to see what we already know – a range bound market without much of an edge.

However what are the odds that bonds will forever be range bound? It’s quite easy to make a case for the inverted H&S pattern on the daily panel (left) to resolve upward sometime next year. But how do we know for sure? Well we never really do unfortunately. Nobody ever has been able to solve that puzzle and believe me, a lot of people smarter than you and I have tried.

What seems to work for me is to work myself upward from the hourly to the daily to the weekly panel. I first look at the overall trend and then assess the odds of various scenarios based on my particular lens. Then I look for signs of movement that may shift the balance near what I have determined to be inflection points. Working myself upward this way allows me to often catch lucrative entries early without betting the farm on the ‘big one’ which obviously only comes around once or twice in a generation.

And that’s really what we do here at Evil Speculator on a daily basis. We look for synergy across various time dimensions and then find exposure where we see an opportunity for price equilibrium to be disrupted. That process of course involves technical evidence in the form of price patterns, statistical evidence, and various momentum measures or other market meta data we have identified to be useful over the years. And of course many times it just pays to stop thinking too much and simply follow the trend.