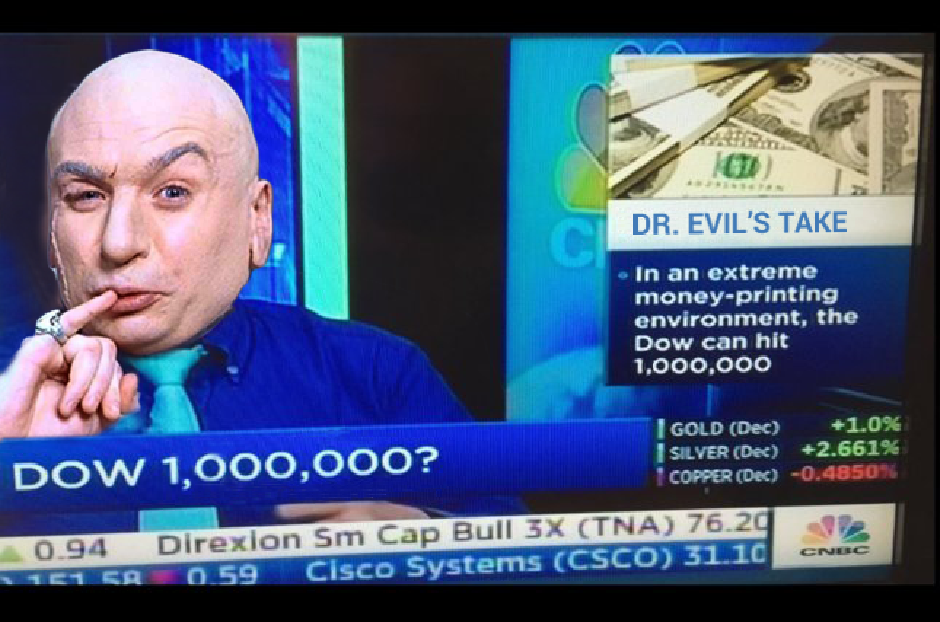 This may come as a complete shock to you, but this may be the first time in modern history that a German has won a comedy contest, and without British assistance. Yes, just let that sink in for a while. Now I already know what you’re thinking: If this isn’t a clear sign that the West is heading straight into the new Dark Ages then I don’t know what is. And I would agree with you, but let me explain. It all started with Howard Lindzon snapping a screenshot of Marc Faber, a.k.a. Dr. Doom, who was trying out what must have been his new comedy routine on MSNBC, suggesting that the Dow may at some point touch the 100,000 mark. So Howard snaps a screenshot and puts it on Twitter along with a challenge: 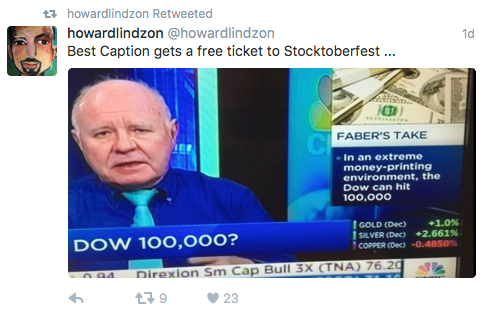 Meanwhile down here at the trading lair there wasn’t much to do courtesy of Mario Draghi bitch slapping Euro traders around, so I decided to respond in kind.  And lo and behold – within less than an hour I was awarded comedy gold and thereby managed to single handedly vindicate the ill reputation of German humor once and for all. A proud accomplishment which admittedly may have much to do with the fact that, despite being born there, I haven’t set foot on German soil for over 25 years.

But irrespective of any technicalities it is clear that I should expect appropriate recognition to be awarded in light of the great service I bravely rendered, and may I say against all odds and in the face of the fickle favors of social media. Howard already did his part and word has it that Angela Merkel herself is now considering to grant me the Grand Cross Star, Special Class for comedic services rendered to the people of Germany. Take that Thomas Gottschalk! (trust me, you’re better off not knowing) 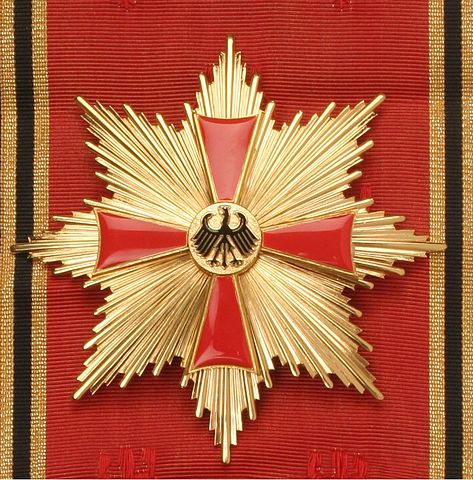 This one will look rather impressive on my wall right next to my Darwin Award.

Now until I am asked to appear at the ceremony in Berlin however I’ll have to make due with the free ticket I won to the Stocktoberfest in Coronado, which is right in front of San Diego. There’s only a teeny weeny problem in that I live in Spain now and, although very tempting, planning a trip there at such short notice would be difficult. Damn you Howard – why didn’t you ask me to be funny in 2012 when I still lived in Los Angeles? Anyway, my loss shall be your gain in that Howard graciously allowed me to raffle off the ticket to one of you readers here at Evil Speculator.

And here’s how to participate: Simply post the most politically incorrect joke involving Germany or Germans in general in the comment section. No safe spaces here at the evil lair! The one with the highest disqus upvotes wins and thus will be awarded the free ticket to Stocktoberfest. Have at it! 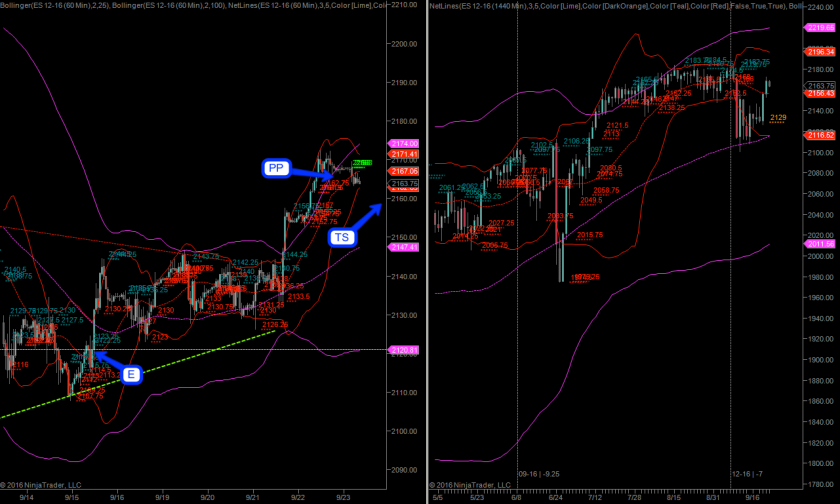 Alright, now on to business. Last week’s entry finally started to pay off Wednesday and even managed to survive Draghi’s speech yesterday. However in the hours that followed I noticed a distinct lack of buying interest on the Zero although the VIX dropped all the way below 12. Basically the barn door was wide open but the bulls weren’t interested in heading higher. Which was a bit surprising until I consulted the longer term panels: 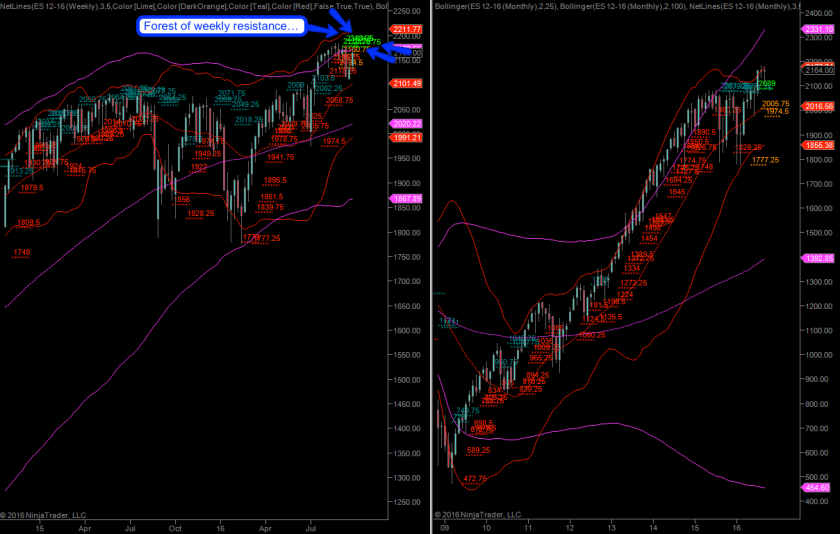 The weekly reminds us that there is a veritable forest of weekly Net-Lines stacked all the way into 2180. And given the lack of momentum I saw yesterday the odds of jumping all that at this stage are pretty low. I know this is not what you want to hear but we’ve got to live with the facts. Ergo I have taken partial profits and am only trailing a small position (1/3R) with a stop below 2160. 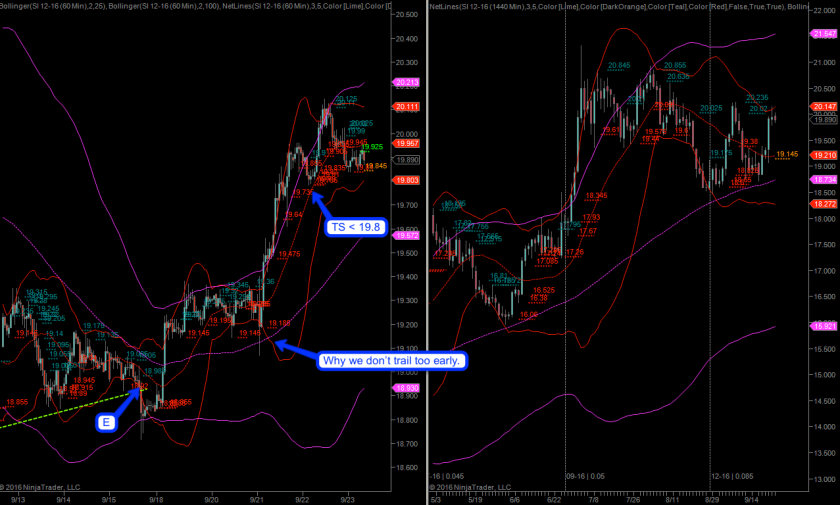 Silver has been very good to us – once again we got very lucky on the entry side and managed to sustain two shake out attempts before prices suddenly slammed higher. That is actually a pretty common theme I have been observing over the past year or two and is the reason why I delay trailing my stop until an MFE of at least 2R. Currently I’m trailing at about -0.5R near 19.8. 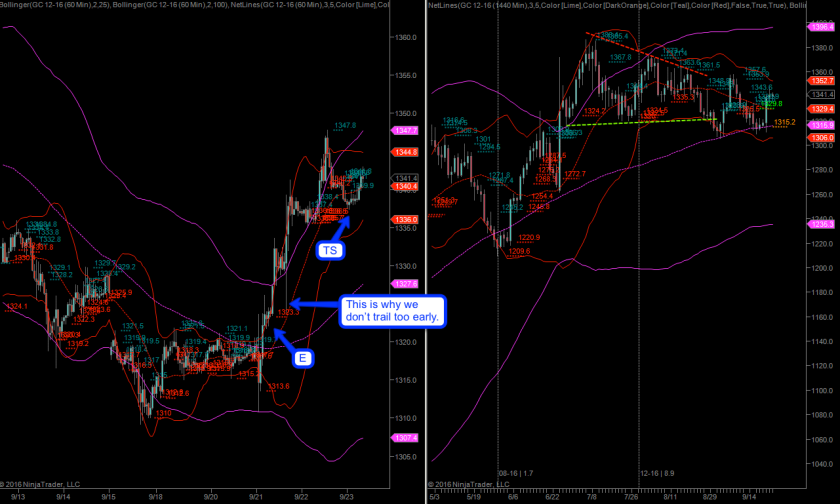 The gold campaign wasn’t any easier – what is not shown on the chart is the early shake out that preceded it. We had been originally short and scheduled to flip for longs near 1320. Once again delaying a trailing stop paid off and I just now advanced it to < 1338. 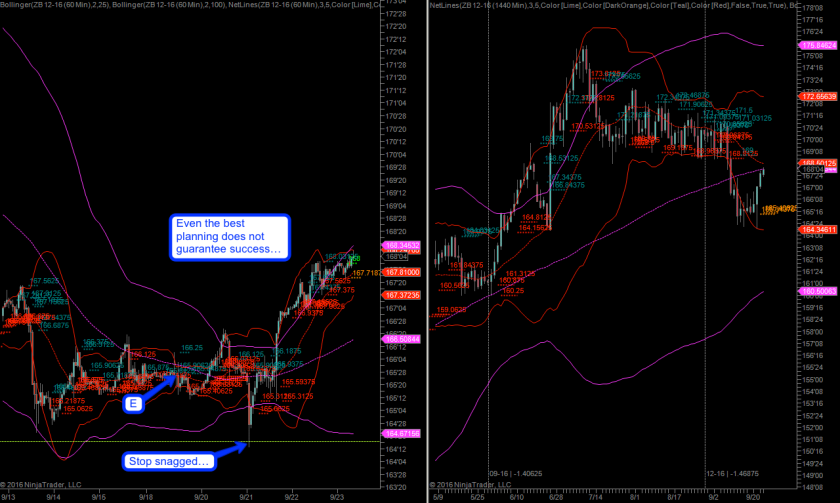 ZB is the one that got away, which once again shows that even with the best planning and maximum discipline you just can’t catch them all. No reason to beat yourself up about it, that’s part of being in the game.