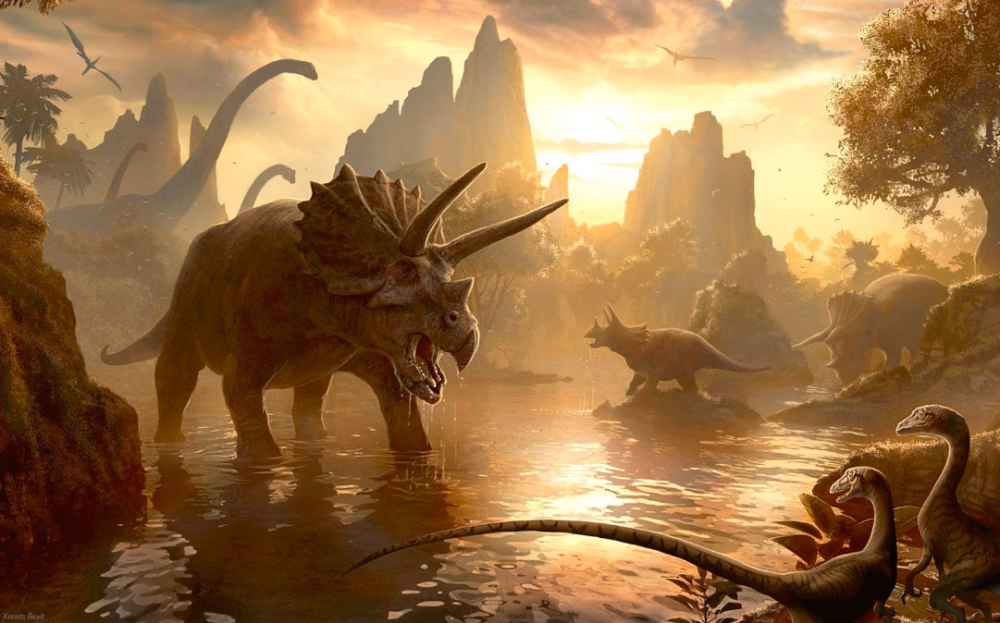 Over the weekend I had a bit of time to reflect on the past year or two, and in particular how increasing randomness and intra-day volatility has affected market sentiment as well as participation right here on the blog. Quite obviously the comment section has become noticeably quieter with less active participants and more sporadic discourse, especially compared with just a few years ago. Which in my mind is a clear sign that more and more retail traders have been relegated to the sidelines; either by their own choice or by being forced out.

A Market In Flux

As a financial blogger I have the dubious pleasure of talking to quite a few traders across the gamut on a daily basis – from the fledgling retail field mouse spotting a humble $10k account all the way to the professional fund manager responsible for hundreds of millions. And I can assure you that they all have one thing in common right now: They are complaining that almost nothing on their end is working and that they’ve never worked harder for less money.

So what’s going on? In my mind we are facing an an mix of issues right now. There are the sideways rangebound churns which are confusing, without any apparent direction, leaving many of us without entry opportunities for weeks on end. Then there are times when markets across the board start flowing within known parameters and entries according to established system rules are once again possible. Everything proceeds nicely until suddenly the fuel gauge signals empty out of the blue and everything begins to head in the opposite direction. There have been countless examples for that over the past year but let’s focus on the most recent examples. 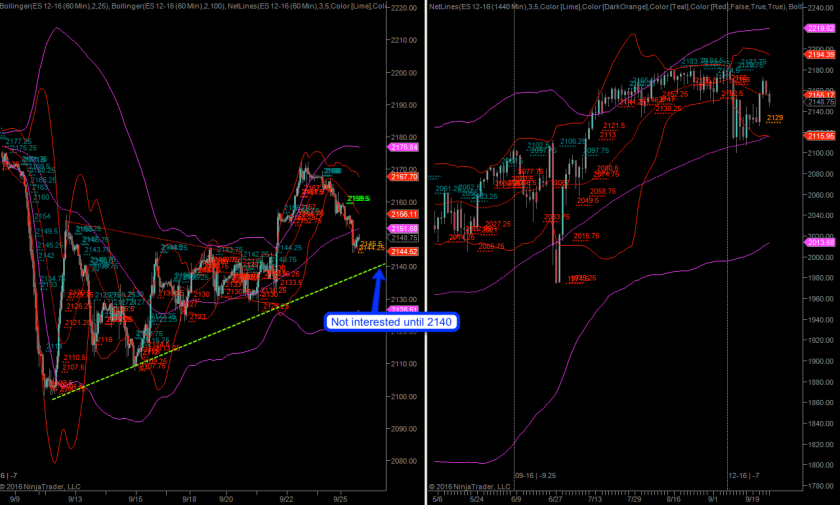 Our long entry on the E-Mini over a week ago was well timed near the diagonal on the hourly panel above. From there everything looked like we were heading into a break out pattern but then suddenly right at the most crucial moment the mojo was gone and buyers completely disappeared. We got out with about 2R of profits but a year or two ago this type of setup would most likely have turned into a massive runner. 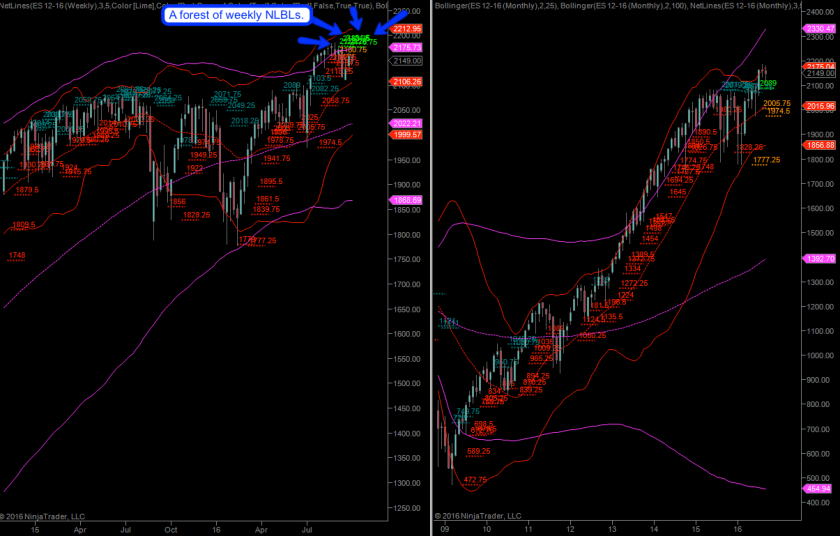 The wall that is now forming on the weekly panel is becoming ever more formidable with every failure to breach it. Once again we find ourself in a sideways range which, without doubt, will eventually resolve itself explosively. And that right there describes the difficulties that most traders I talk to have been complaining about. We now seem to be stuck in a repeating sequence of sideways churn and elevated intra-day volatility followed by sudden resolutions to either the up or down side. In most cases said resolutions are triggered by central bank announcements, terrorist attacks or macro economic data apparently do little to affect market sentiment these days. 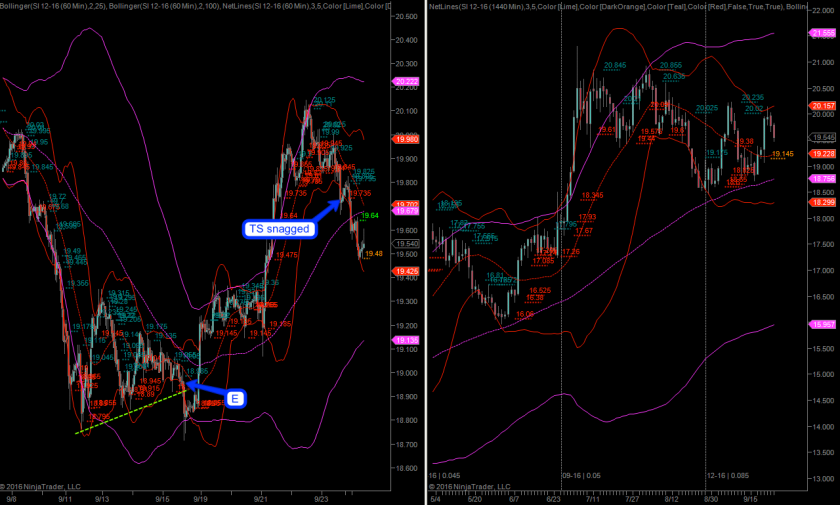 Here’s another example. Silver was one of the juiciest entries we had taken in recent weeks and by anyone’s definition had the makings of a bona fide trending pattern. Until suddenly it turned on a dime and proceeded to head lower. Once again we got out with a few R in profit but in a ‘traditional’ market environment (if there is such a thing) we would be trailing this campaign all the way into 21 or 22. 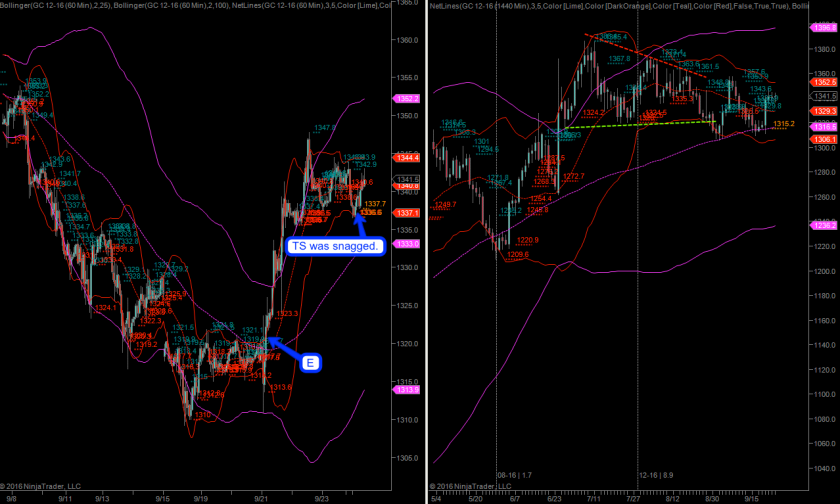 Gold fared a little better but still makes the list as it managed to snag my (conservative) trailing stop at -1R MFE earlier last night. I have little doubt it’ll proceed higher from here but once again my profit potential was cut short by a sudden turn that came out of nowhere.

Better To Be Lucky Than Good

Now one thing you probably noticed about the campaigns shown is that we got extremely lucky with our entries. Strike it up to skill or simple dumb luck – the problem here is that a less fortune or delayed entry would have further limited our ability to profit. A late entry also affects your campaign management. Consider that I could still be in those campaigns with my ISL where I originally had it. Just last week I pointed out that trailing too early would have taken us out of the game across the board on the first or second day with very little profits.

We don’t know how much longer these conditions will prevail. Perhaps it’ll resolve itself one way or the other in a few weeks and we finally find ourselves in a more manageable period. But that’s something I could have easily proposed over a year ago and we still seem to be holding the tiger by the tail. It’s quite possible that this is the status quo until something finally gives and we are seeing a major market dislocation tantamount to a big reset.

So in order to maintain both our sanity and our trading accounts in the interim I thought it a good idea to post a few protocols aimed at maximizing our chances of surviving an obviously extremely difficult trading environment or whatever the market may throw at us next:

Before I let you run off – here’s one juicy chart for my intrepid subs:

I’m happy to announce that Bergamot entered late but wiped the floor with almost everyone else. Solid work there and although I suspect heavy plagiarism there was never any rule about that, and our ‘beg-borrow-or-steal rule’ applies. Bergamot: send me an email to admin@ and I’ll pass your info on to Howard Lindzon so you can claim your free ticket to the Stocktoberfest in Coronado, CA.