Is October A Bad Month For Traders? 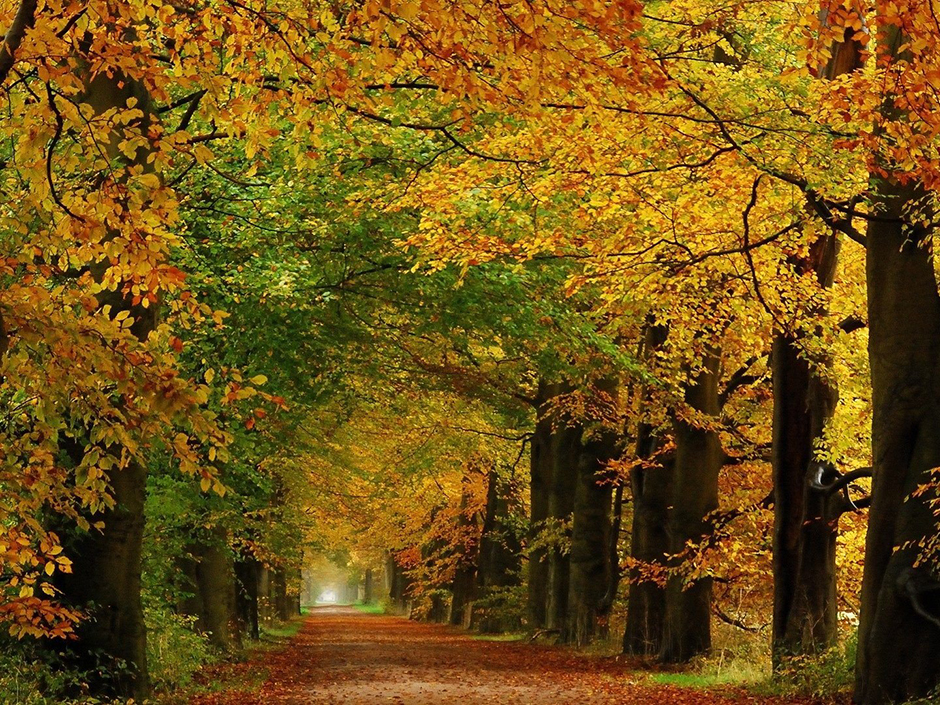 With summer and the dreaded vacation season finally behind us I am already looking forward to the wild swings the fall and winter seasons may have in store for us. For volatility opens the door to juicy trading opportunities and that’s what we’re all about here at Evil Speculator. 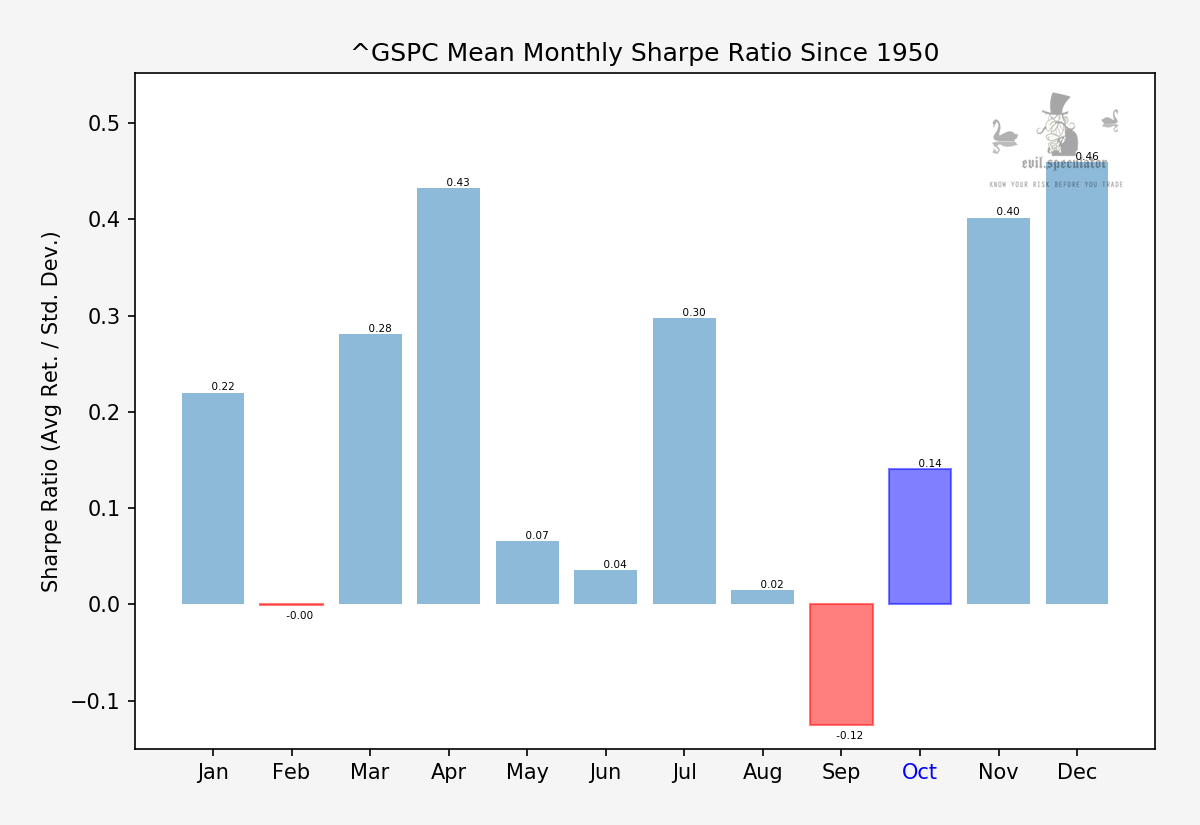 While monthly statistics may sound boring to some of you it’s hard to argue the fact that September played out exactly as suggested simply based on seasonal precedence.

Of course a directional bias doesn’t mean the price action is chiseled in stone, but as the saying goes: The race is not always to the swift, nor the battle to the strong, but that is the way to bet.

At first sight October isn’t much to write home about. In fact it trails as the sixth weakest month of the year right after May. 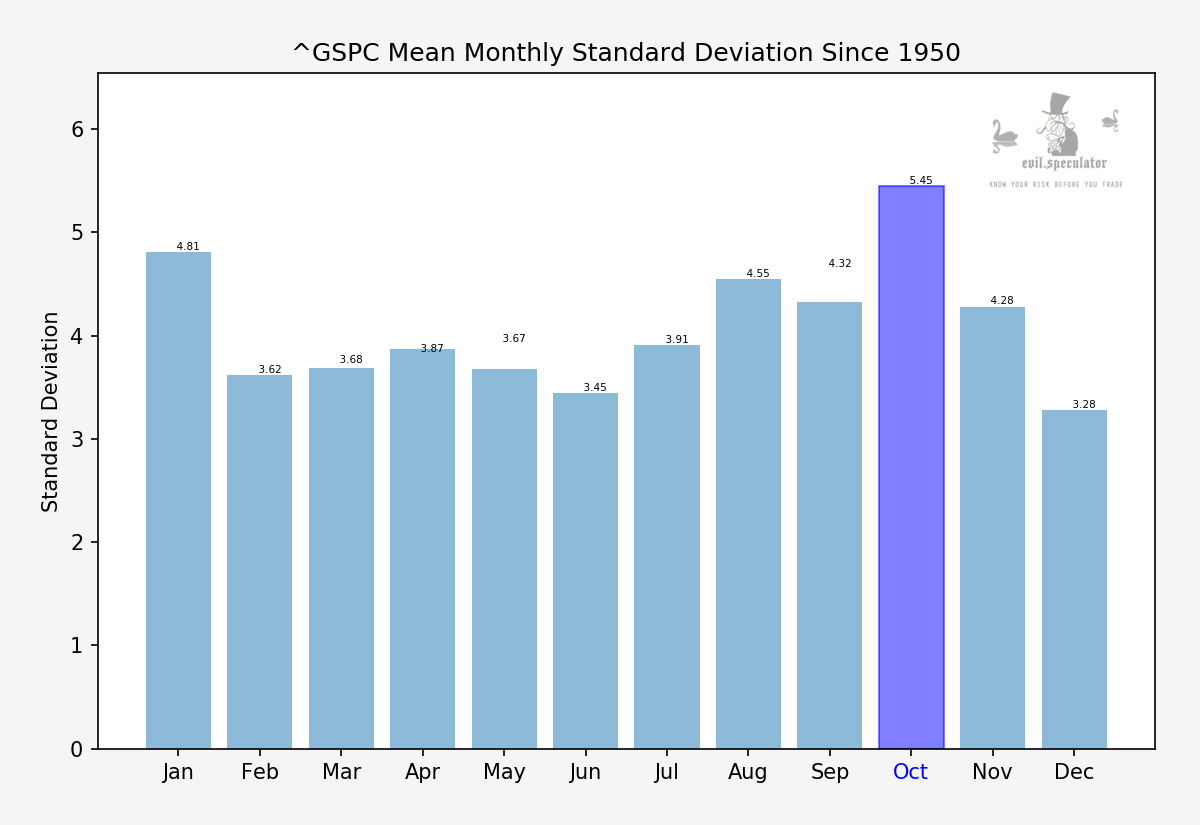 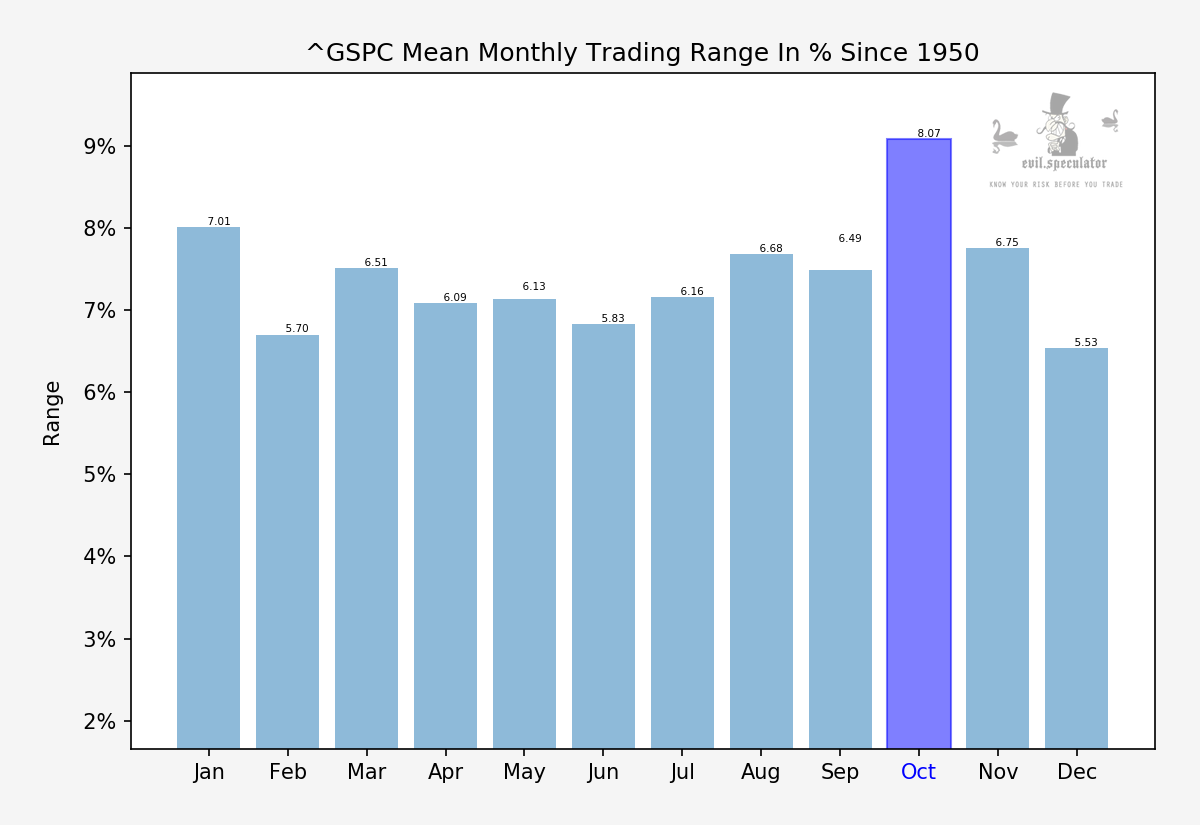 It’s a period of transition – in many respects – and we should expect some wild swings in the coming weeks. 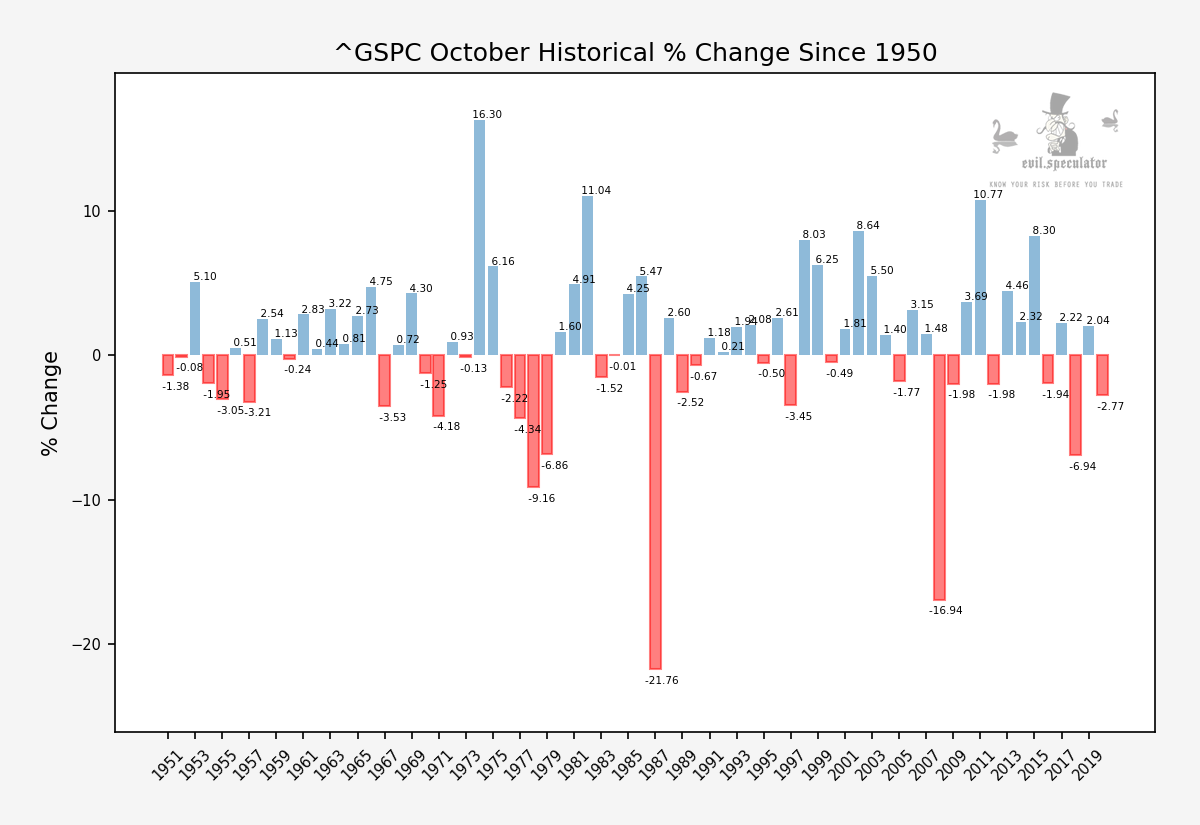 This graph shows us every single October since 1950, so 60 years of price action. Even at a cursory glance it becomes clear that downside months occupy a little under half the dataset – 27 out of 60 (I did count 1984 as a break/even).

Which brings us to 45% negative which on its surface is fine. However we do see several outliers which suggest that when things go bad in October they REALLY go bad.

And that right there is the underlying reason for October’s lousy reputation especially among seasoned traders. If you’ve been around for more than 10 years you will most likely have seen a big October surprise and unless you traded back in the 70s it was most likely to the downside. 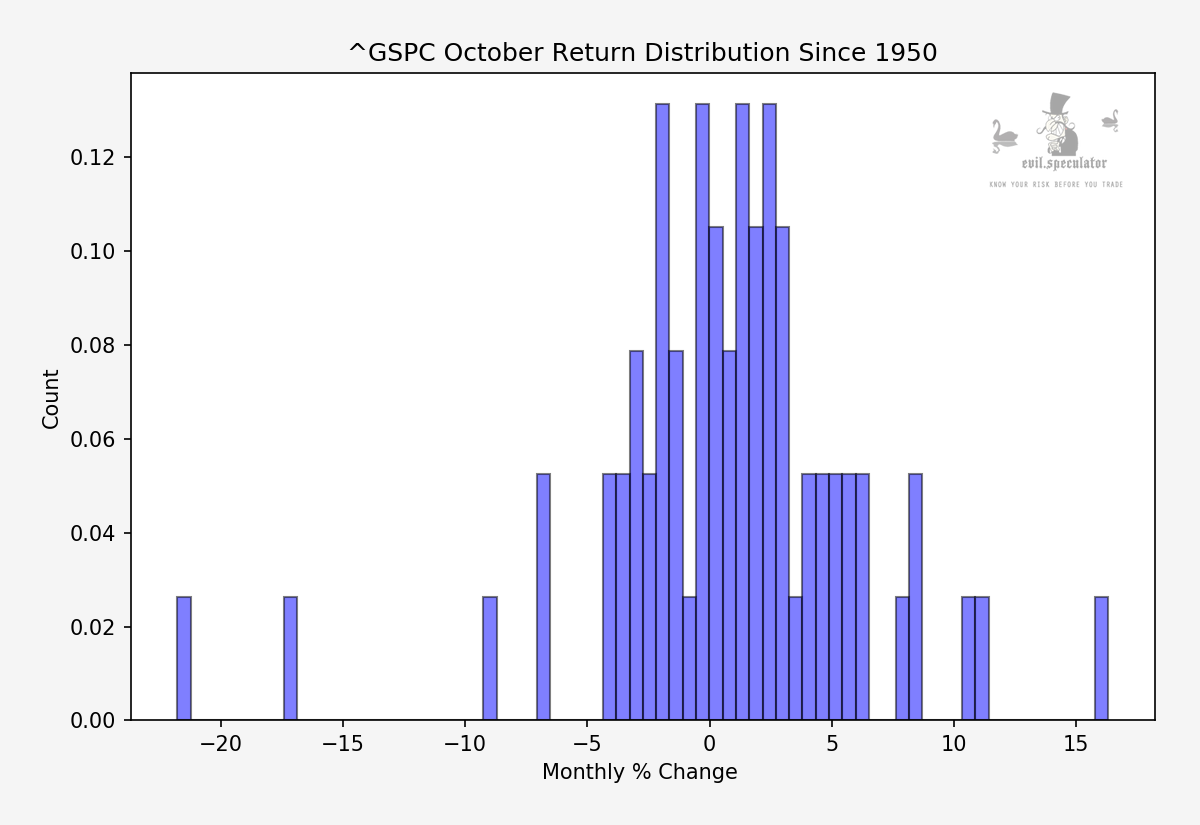 The histogram of all those returns paints a pretty clear picture. October could have been a pretty regular month but the outliers really spoil its reputation. 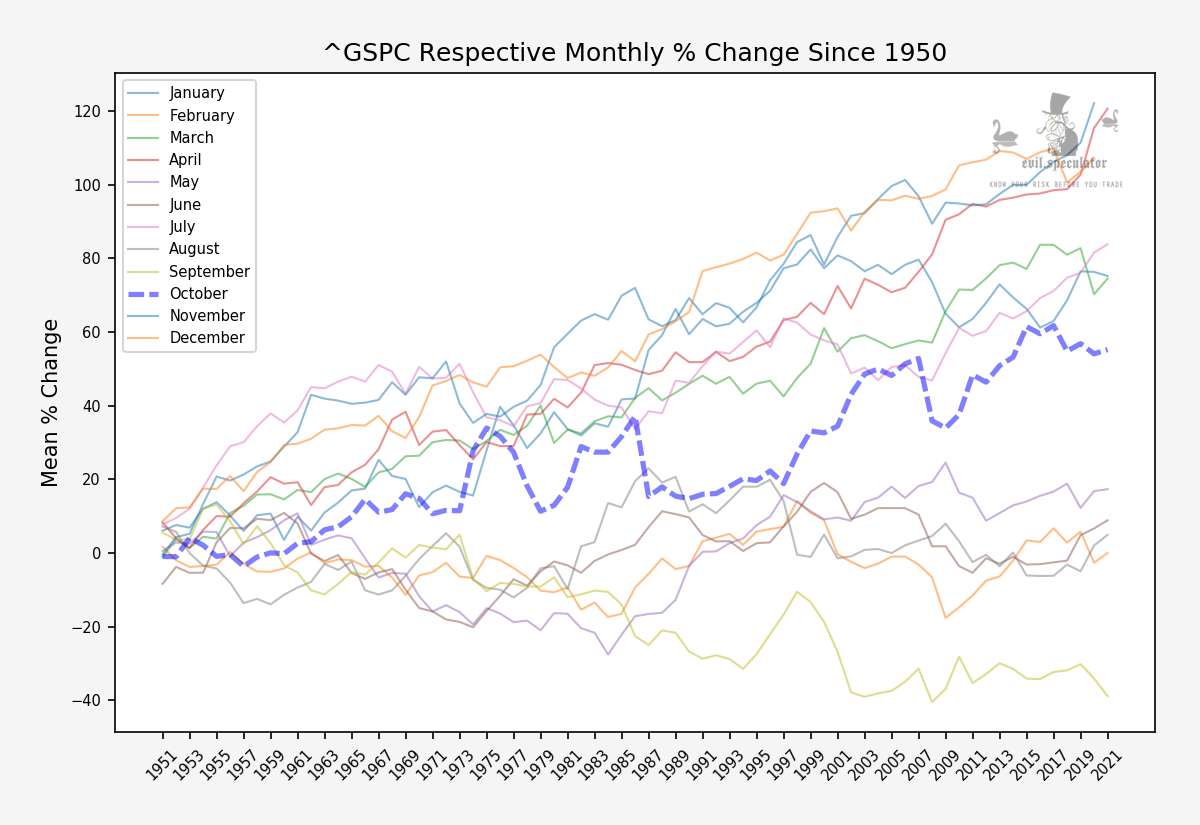 If you chain up all those October returns then what you get is shown above as a blue dotted line. Positive on average but not really a month you’d be riding in cruise control.

Now let’s take a look at week #40 – which seems to have a few surprises up its sleeve: