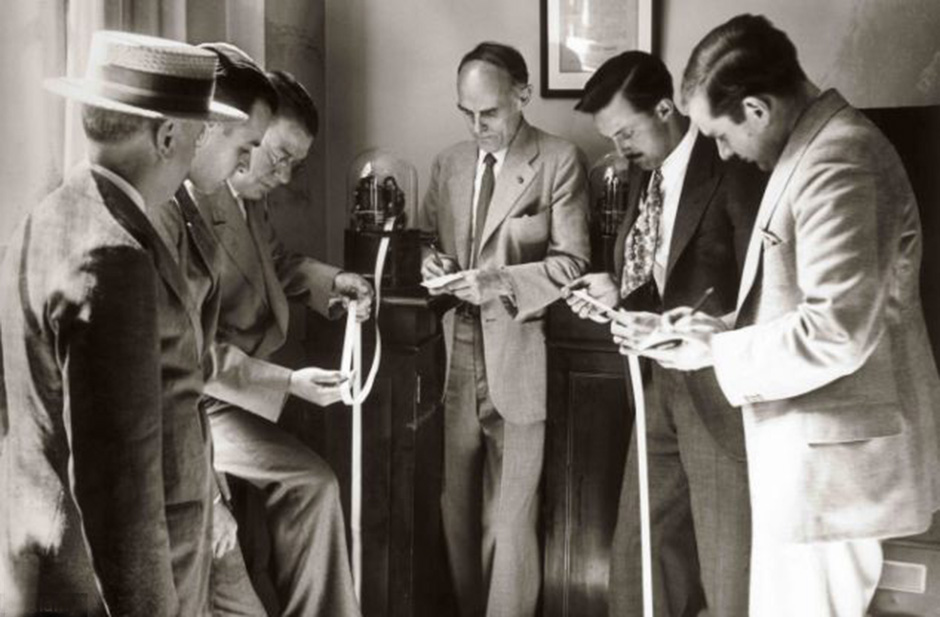 In case you missed it last evening, check out my ‘Ultimate Guide On Raw Edge Discovery‘ which I hope you will find informative if you are considering to build your own trading systems or even steal one from someone else. Now if you hunger for setups please do not despair as I have posted some juicy entry candidates in the subscriber section below (if in doubt you know what to do). But first let’s look at a few charts on the futures and forex side as this is a good time to cover this week’s live tape reading course. 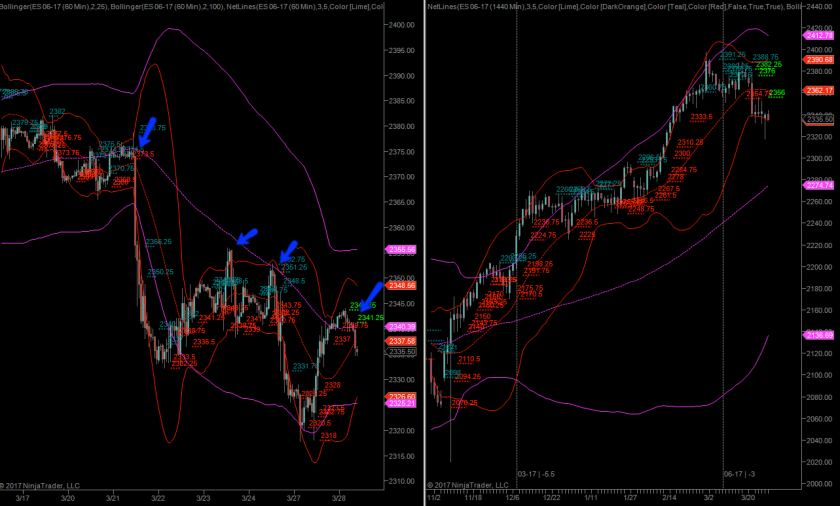 On the E-Mini we’re seeing a failure to recapture the 100-hour SMA on 3/21 which resulted in a fast 40 handle sell off into 2335. Once volatility had kicked in there were two attempts to recapture the 100-hour but failed almost immediately without as much of a retest. This tells us that gravity is strong and that sellers are using volatility jumps higher to reload positions. 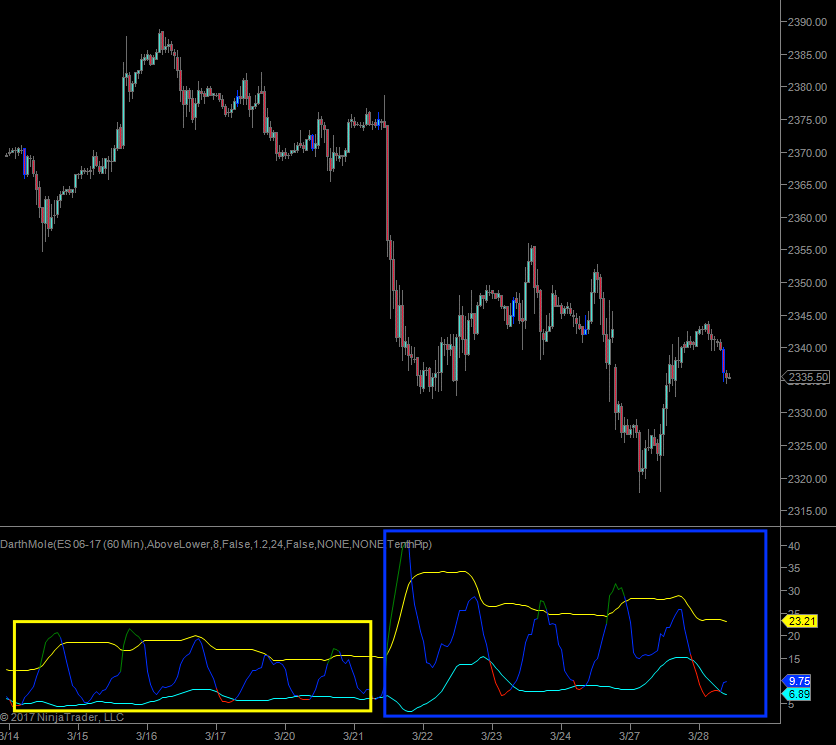 When I see the range in volatility remain expanded (i.e. the bubble remains wide) then I’m less hesitant to go bottom fishing especially if there are no clear signs of support on the daily, weekly, or monthly. Sure a perfect entry here may net me some quick profits but at the same time I could get kicked to the curb rather swiftly. Which means I’ll wait for things to ‘settle down’ – and that more literally means I am waiting for volatility and price to bottom out a little.

Looking at the daily panel on the first chart – I don’t see much in terms of support here. I could try to be clever and use the 25-day and the current spike low as a reason to be long. But if I was still short here I may easily consider more room for continuation. The biggest argument against that right now is the big daily spike low and if the tape slows down today or tomorrow and perhaps drops slowly toward the previous lows THEN I may throw my hat in the ring. But for now I’m staying aside here for the reasons elaborated. 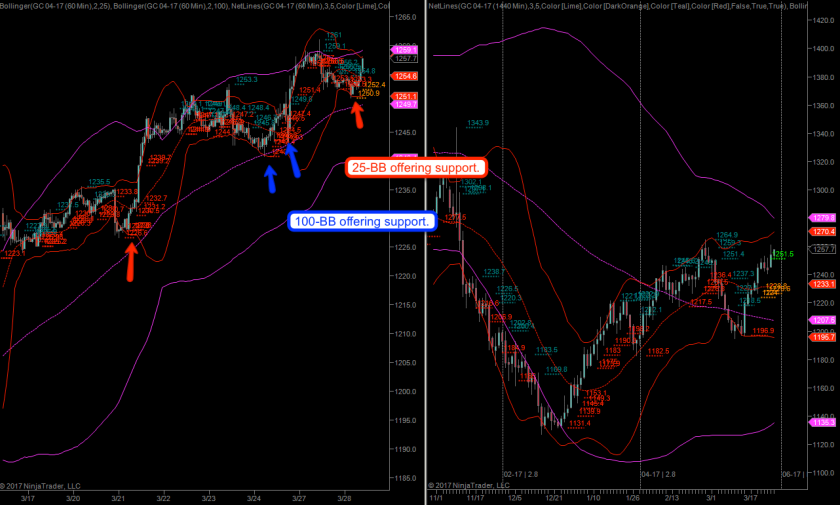 Gold us a great example of a medium term trend. Quite interesting here is the fact that it’s been gyrating higher using both the 25-hour and 100-hour SMAs as spring boards. Great buying opportunity assuming that the 100-hour doesn’t start dropping – right now it’s drooping a little and it’s time for gold to get a move on or that daily NLBL may actually pose as resistance. 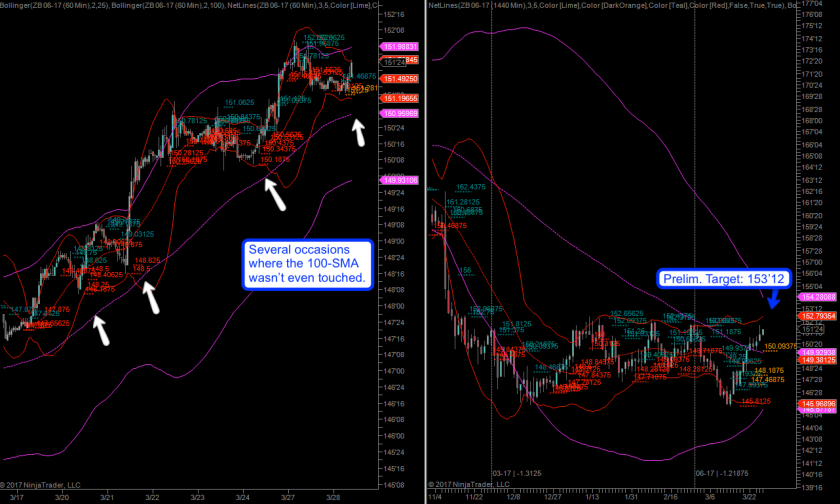 Bonds currently show us a textbook example of a solid slow motion medium term trend. Those can actually persist for weeks on end and I think we may easily see 153’12 as a new target. Noteworthy here is that the 100-hour SMA isn’t even being touched. Now that’s my personal lens and perhaps you’re using an 80 or 200 or whatever. In almost every case it should be clear however that reman reversion kicks in incredibly quickly after a few ticks of correction. 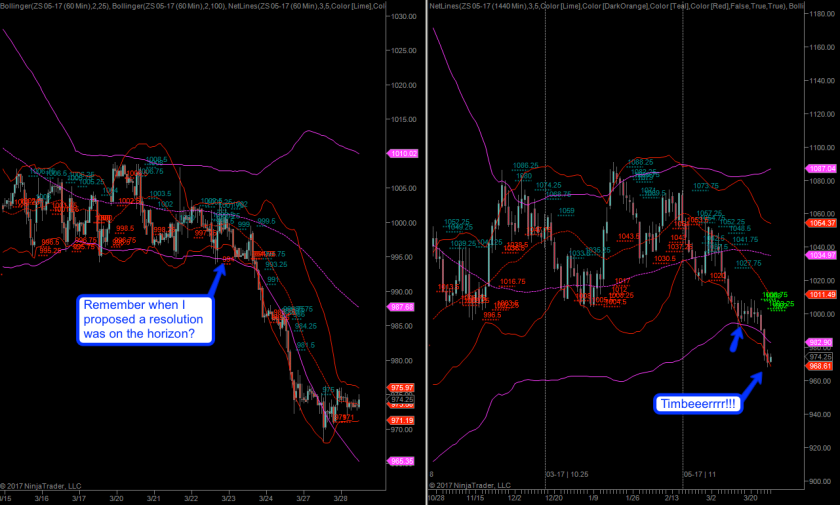 Soybeans based contracts are all in excellent formations right now. Here’s ZS which you may remember was being pinched strongly last week which is why I suggested a violent resolution was forthcoming. A hypothesis which turned into reality shortly after highlighted by a merciless sell off with practically no counter response (it’s a small contract) until yesterday afternoon. Note how price remained outside the lower 100-hour BB since the point of recognition (short after my arrow) and only now is trading back inside.

It’s tempting here to anticipate a floor pattern, especially since we’re back inside the BB. But lacking any technical context on the daily you are basically relying on momentum only to risk your trading capital. So at minimum I would recommend you wait for a retest of the current spike low near 960 and if it holds then perhaps slowly accumulate your way up. The current ST pattern looks a bit premature to me personally although some would disagree. 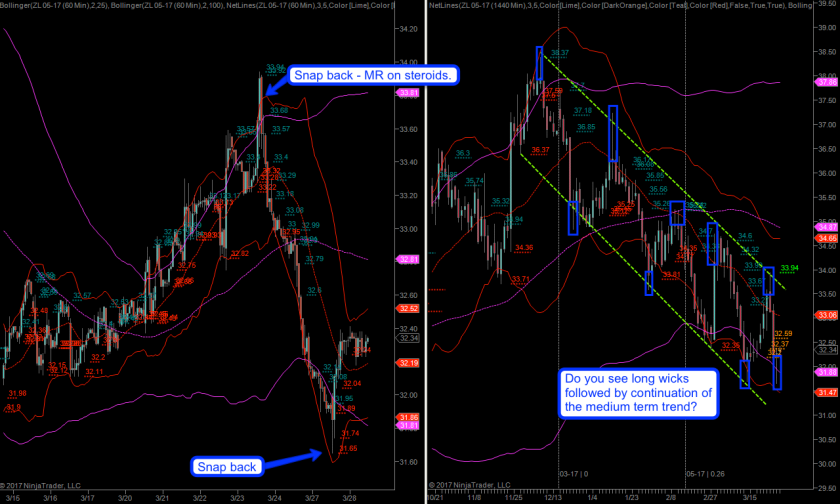 Soybean Oil – where do I start? Clearly this is not a contract for anyone taking heart medication as it’ll throw against the wall, shake you silly, and then ask you what you’re getting all excited about. I was actually anticipating a run higher here last week and it came fast and hard. But then suddenly turned on a dime, perhaps in part because of the falling channel pattern on the daily chart.

Now pay attention here because this is important: Note on the daily how snap backs are often initiated by a long wick in the current trend direction. Those long wicks appear to be much more rare inside this pattern. This again is a textbook swing trading signal you can use to get exposed contrary to the signal candle. So you see a long wick preferably near the lower or upper channel boundary – take a reversal trade and put your stop below the spike low or above the spike high. 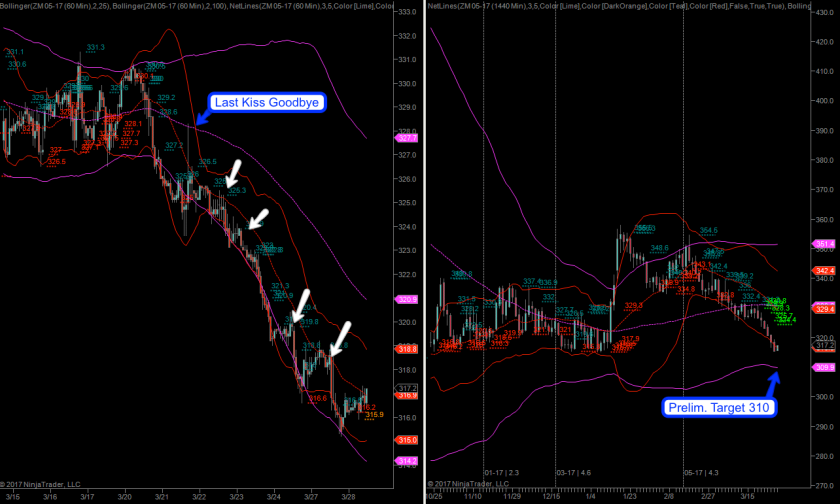 And here’s Soybean meal – as if we haven’t had enough of soybeans yet. Great chart though – note the last kiss goodbye followed by a violent sell off which may actually continue all the way into 310. If you are a trend trader and you happen to catch a run like that – do yourself a favor and trail it near the 25-hour SMA and Bob’s your uncle.

Alright, let’s do setups – please step into my lair: