Meanwhile Down At The Evil Lair

Over the past few weeks I have hinted a few times that I was developing a swing trading system based on Darth Mole. Which you may recall is a simple indicator I developed last year with the aim of predicting expansion in price volatility. Quite a good thing to know if you’re about to enter a symbol and over the past few months we’ve been watching it nail one big swing after the other. Some of you are subscribed to the free email alerts or have seen it in the twitter feed. But for the uninitiated here are a few screen grabs:

Here’s DarthMole running against the EURUSD. The blue arrow indicates when you received the alerts.

Here it is killing it on crude.

And here it’s having fun with the 30-year bonds.

I guess you get the idea – it’s bang on when it comes to predicting volatility. Of course the missing piece always has been DIRECTION. Quite frankly DarthMole has been driving me crazy over the past six months or so – I kept watching it nail those volatility swings day after day and became almost obsessed with developing a system that would take advantage of its uncanny abilities.

For months I spent almost entire weekends scrolling through mountains of charts. Just watching and taking notes of anything that stood out to me. Exhausted and desperate I tried to get Scott involved who took a long look at it and pretty much told me he was seeing no edge. There simply seemed no way of making a directional calls and thus building a system around, no matter how tempting, seemed out of reach. After all volatility knows no directional allegiance – it’s great to know when it’s coming but what to do with it?

But persistent (and a bit obsessive) as I am I kept plugging and testing various ideas – correlations, other indicators, Net-Lines, moving averages, heck, everything I could think of. I realized that taking losses would be part of the process and that any successful system would thrive via large outlier winners followed by a succession of small losers. But when exactly to take that entry was the big puzzle I needed to solve. I was laboring for weeks on end until about three weeks ago the light bulb suddenly came on. The result is a fairly trivial and unoptimized swing trading system which is frankly speaking is killing it across the board. I call it (drum rolls) SCALPIUS. Let me show you: 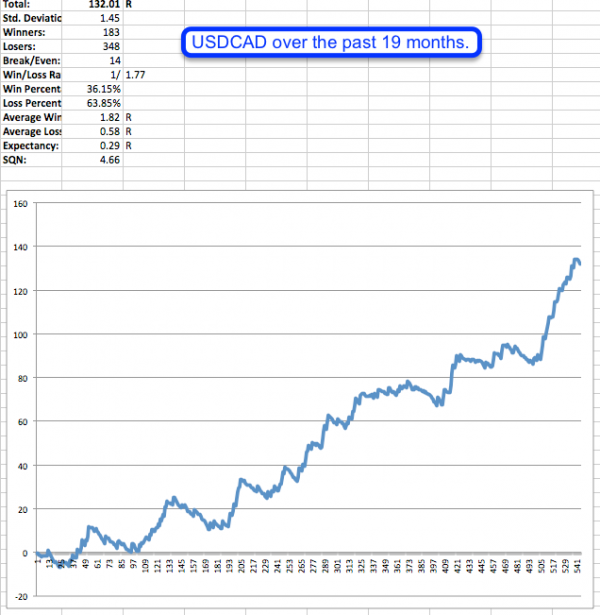 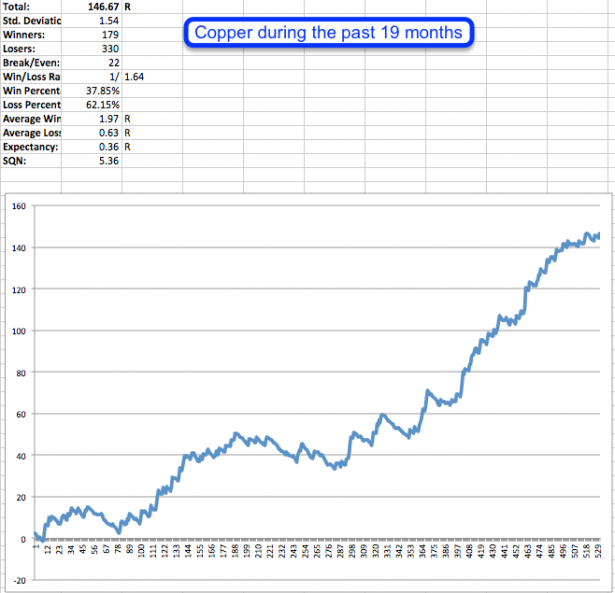 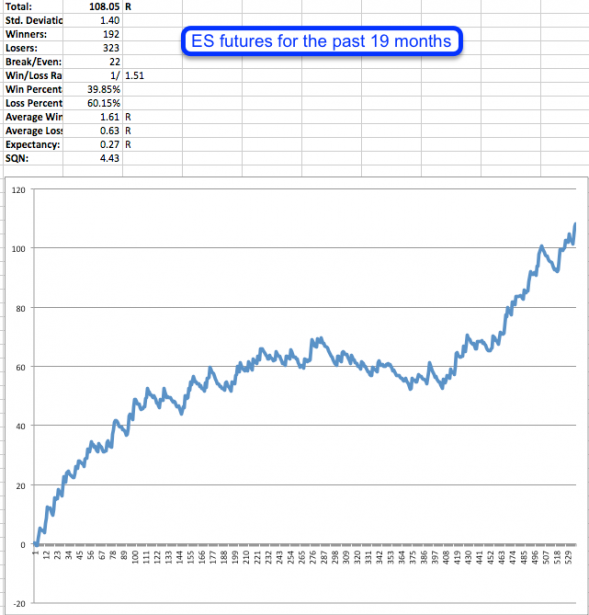 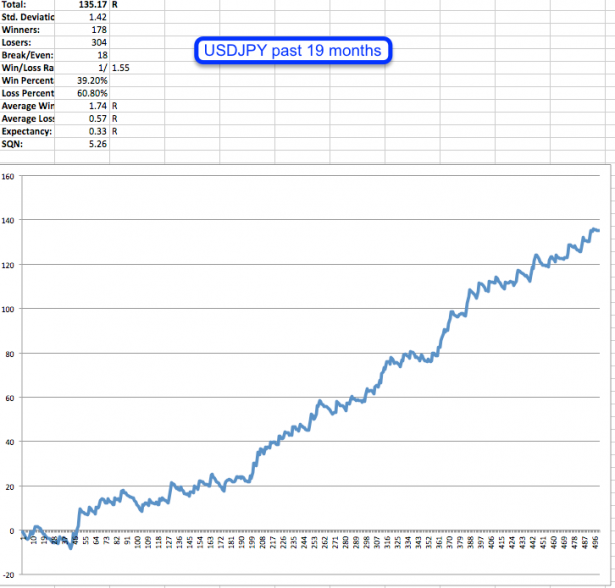 But it really really loves Forex for some reason. Here’s the gofer. 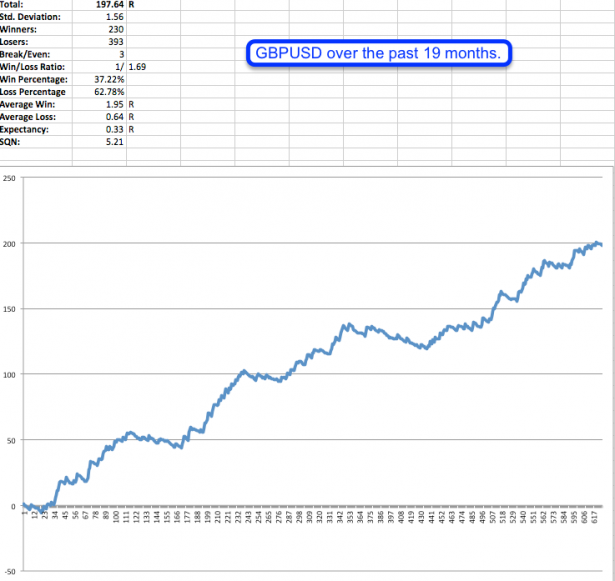 Cable is just a beauty, isn’t it? 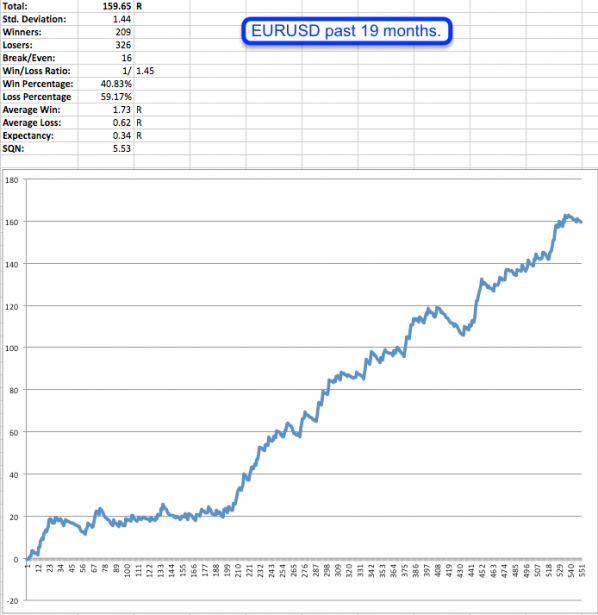 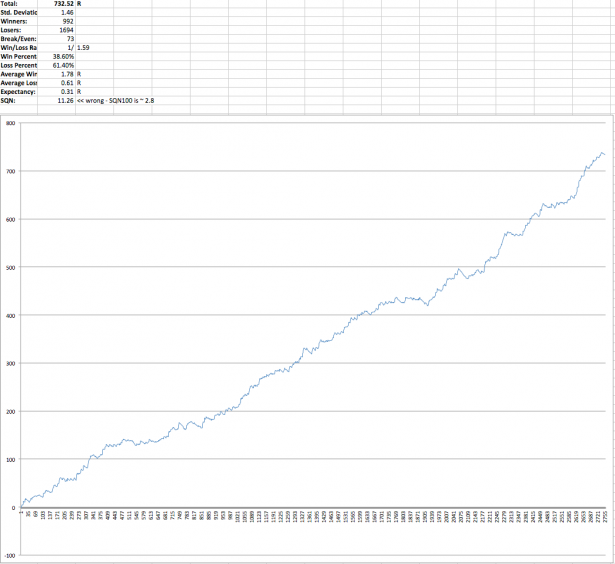 And finally here’s a graph showing all symbols above combined. I know – 732R – insane. Took over 2700 campaigns to get there – a bit over six to seven campaigns per week day (i.e. about one per symbol). Yes, it loses more than it wins – the ratio is a win rate of about 1: 1.6. But the winners can be huge and it loves to ride the trends.

In case you’re wondering – no this is not something I plan to offer as a service via email/Jabber alerts. It’s way too busy for that and I’ve learned my lesson with CrazyIvan (remember, only 4 subs left). And honestly I’m still pondering whether or not I’ll be accepting LAMM signal subscribers either. Perhaps a small number in a few months from now – if so only the people who already signed up for the LAMM service recently. Frankly it’s probably the best system I’ve ever build plus it very much suits my trading style. A bit busy but it’s manageable as it’s running on a 60 minute chart.

I’ll be leaving for Austria for a few days on Friday morning and will start trading Scalpius after the 25th when I’m scheduled to be back in Valencia. I’ll keep you guys posted on how it’s doing. In the meantime keep watching out for those DarthMole alerts – I always told you guys there is a great system in there! 😉