Our resident Heisengerb posted an inspiring video by Nick Rage this afternoon. As I was watching it I thought it to be the perfect segue into covering one of the most glaring but at the same time most ignored hurdles standing in the way of becoming (and remaining) a successful trader. I meant to write a post about it for a while now and Nick’s video succinctly covers many of the basic lessons I wanted to convey. So I let Nick to the heavy lifting now after which I’ll catch up with you and apply his lessons to the very path we are pursuing here at Evil Speculator:

Still with me? Watched the whole thing? Good!

Now in that video you just watched you probably recall the part on the turtle trend system, which is actually a system I actively used to trade until about 2009. It’s boring as hell and the reason why I’m not recommending here on Evil Speculator is that I know that 99% of my readers would not be able to follow it for more than a month or two. Nick has done a great job of elucidating why that is and how many retail traders use incredibly small sample sizes to dismiss a system that on the surface most of you would be certain about wanting to trade over the long haul. Until you actually do that is. 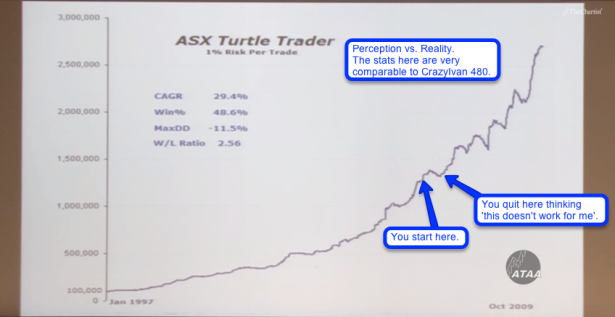 Some of you may recall Scott’s ‘Nuts And Bolts‘ post in which he posted some of the stats he collected for CrazyIvan – both on the 480 and the 30 – without and with filters. The filtered versions, which are the ones we wind up choosing (after a pertinent blog poll), actually are very comparable to the ASX Turtle system. The average per year for the 480 is about 35R which comes out to >40% per year compounded. The 30 does a bit better with over 45R on average which would put us at around 50%+ compounded per year. Max drawdowns are also comparable to the TT system – less than 10R max for both filtered versions. 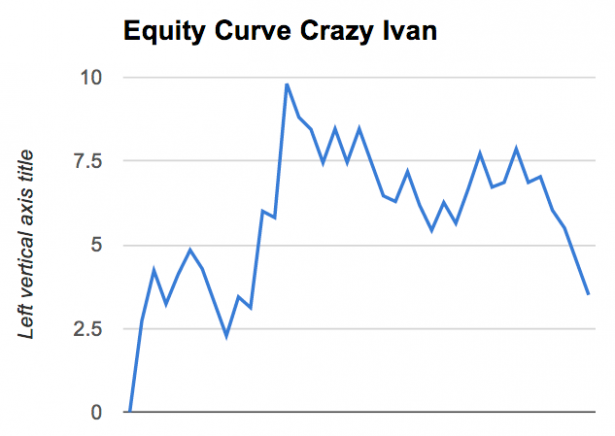 And here is the profit graph for the first month of CrazyIvan FX since its launch. The entire Google spreadsheet is available here, you may want to bookmark it as we update it regularly. This is not back tested, mind you, this is forward traded with real entries and exits including slippage. Given the horrific tape we’ve had to endure over the past few weeks one may look at this and say – heck, not bad – that’s a pretty good start. CrazyIvan eked out 3.5R which is statistically in line with its 30R+ target on an annual basis.

Nevertheless over 30% of my CrazyIvan subscribers already quit after the very first month. I’m not embarrassed to publicly state that as it has no bearing whatsoever on the quality of our system. And I’m not posting this here to embarrass anyone or to point fingers. Look guys – frankly speaking I couldn’t care less. The system works and Ivan has traded the very same rules (in one form or the other) for over 30 years. Scott has been trading the very same rules discretionary for over 10 years now. Through a variety of markets and it has maintained its edge.

So why would people leave a winning system after just one month? Well, obviously it has nothing to do with CrazyIvan per se and everything to do with perception vs. reality. More specifically it is due to a cognitive bias we traders call recency bias. Maybe you missed a few trades for various reasons and instead of attempting to follow the system more closely it’s easier to just give up. You just don’t think it’s going to work. You feel more comfortable trading your own rules. The notifications are a bit confusing. Mole is an idiot. Etc. etc.

Actually it’s quite possible that CrazyIvan may have scored a losing first month and that we may have been down 5R for the month. Fortunately it didn’t (despite the shitty tape) but if it had I guarantee you that over 50% of my subs would have quietly departed. Again, I’m not saying this to shame any of you subs into staying subscribed – it’s all the same to me. But I thought this to be a great opportunity to remind all of you of the big picture and what it takes to be a successful trader over the long term.

When I started trend trading way back when I read one of Michael Covel’s books on the subject matter. I don’t recall where exactly but in one of Michael’s books he tells the tale of a pretty successful trend trader who ran a fund and was producing 30% plus returns every single year for over a decade. At some point he had his folks run some stats. Much to his surprise he saw that the majority of his clients were losing money. He first thought that there must be some mistake in the numbers but it turned out that many of his clients would leave during major drawdowns and then return when they saw him rack up profits again. Of course that just led them into missing out on the rebounds.

I don’t care what system you trade – CrazyIvan, Turtle Trending, your own evil concoction – it doesn’t matter as long as you can prove that it has a statistical edge over the long haul. What does matter however is that you stick with it – period. Your short term perceptions will constantly challenge reality – that is part of being human. And it is important that you resist your emotions and remind yourself of that fact every single day. As Nick said in the beginning of his video – to trade successfully is actually rather easy. There are a ton of good/proven systems out there. The problem is us. Most people don’t fail at trading because of the systems they are trading. They fail because they jump from one winning system to the next and keep losing by ignoring the rules.