Scalping With The Mole

And now for something completely different – but I have a hunch you’re going to like it. If you’re a Zero sub then you are probably familiar with the Mole indicator which is located right above the Zero Lite on the 5-min panel. The basic tutorial refers to it as a different way of visualizing the Zero – as a matter of fact it represents an early version of the Zero indicator. As it shows a bit more context the Mole indicator often offers valuable clues as to impending swings in momentum or a shift in participation. For example: Be on alert when you see the Mole’s bubble expand or contract – the former indicating strengthening and the latter a weakening of the current move.

Some of you may recall that I introduced both the Mole and the Zero indicator in late 2008 and it has served us very well since. Which is why I have barely made any changes to it since about early 2010. It’s not that I’m lazy, rather I happen to be a believer in the old aphorism ‘it it ain’t broken – don’t fix it!’.

However recent events suggest that I might want to go and have my eyes checked. Let me explain: It all started earlier this week when an intrepid sub sent me an email asking why the Mole’s green line was dipping below the Zero mark. Now, I had seen this happen for years now and to me it was simply an expression of downside acceleration as it is almost always associated with red candles. And of course the inverse applies to whenever the red signal line crosses above. I was about to just bounce him back a quick note when suddenly my Spidey sense got triggered and urged me be useful for a change and take another look. I don’t know why but I had a sneaking suspicion that I may have overlooked something important.

The second I took a look the scales fell off my eyes – and Jim Morrison explains it best! When in doubt always consult a dead rock’n roller for important clues. Maybe I have to change my listening habits during trading hours. 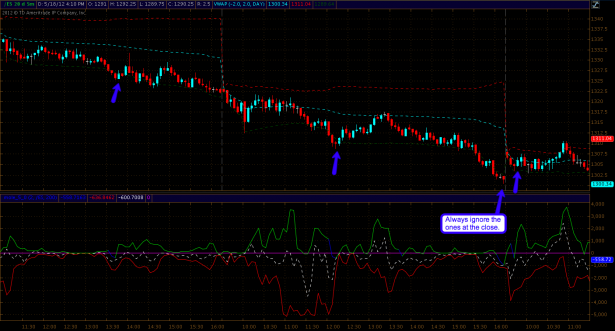 Frankly it’s something I should have seen years ago – as you may imagine I am really kicking myself. It seems that zero mark breaches are almost always followed by snapbacks – usually within one or two candles. Also, the scope of the reversal appears to be directly correlated with the depth of the zero mark intrusion. Shown above are examples over the past three sessions – I did not change any of the settings. As you can see the reversals are not always big but they seem pretty reliable. The only exception being the last few candles of the NYSE session – obviously a lot happens in the spoos overnight and a scalper obviously would not get positioned the next day.

I poked around a bit more and the past month of Zero signals seem to strongly point towards a solid edge. As I’m not completely useless the first thing I did of course was to create a new version of the Mole – this new one changes the green or red lines to blue whenever they cross over to the other side. Since I took these snapshots I also have added handy blue arrows to the spoos panel – if you log into the Zero now then you can already see them in action. 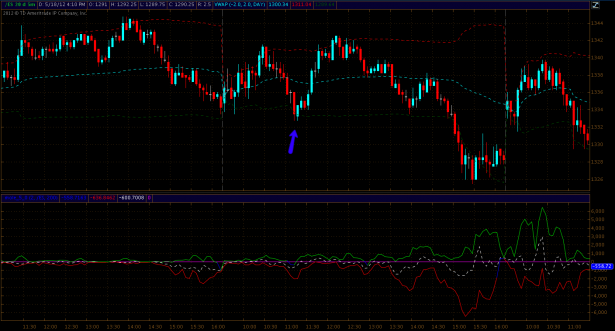 Here I’m simply scrolling back a bit more. Another event which would have worked out nicely. This was not a very strong signal and perhaps the vehemence of the reversal was coincidence. More observation is needed I think. 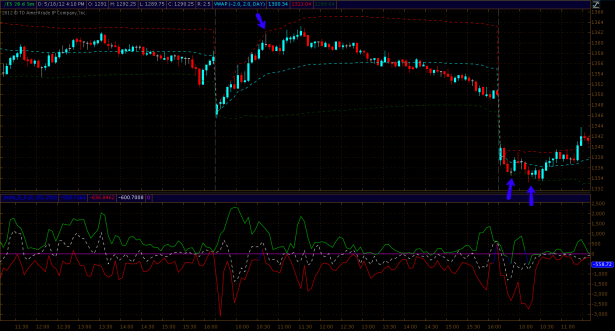 And further back we go – as you can red line breaches to the upside seem to follow the same pattern. Not always are the ensuing reversals significant but that does not render them useless. Perhaps you are already long/short and you encounter an opposing signal which of course tells you that it’s time to take profits. 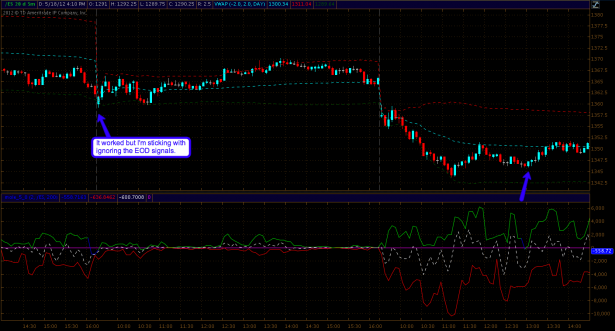 At least for the next few months we should stay away from any signals that occur at the open or the close. The example above would have worked and maybe the open signals are a possibility. 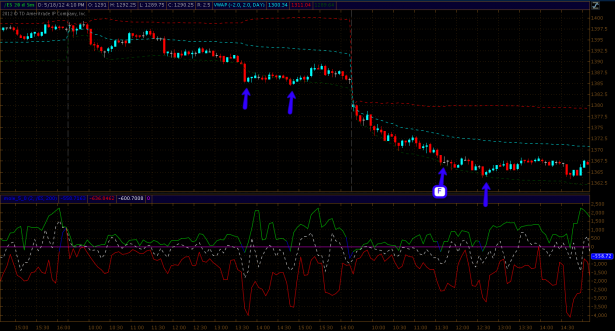 You can see that this was near this year’s highs but we are already in the process of rolling over. I see three valid signals and one I would declare a failure, however even that one turned back to b/e rather quickly. 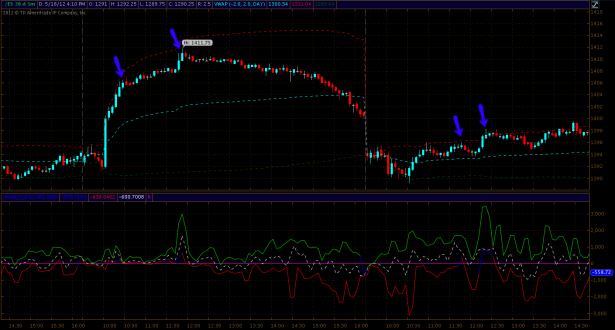 And this shows you that the inverse signals seem to be equally good – we just haven’t seen many of those in the past few weeks. Which in itself is perhaps an important clue. Unfortunately I do not have more than 20 days worth of data right now but perhaps the presence of majority of downside reversal signals (i.e. buying exhaustion) may indicate that the current trend is down. A majority of upside reversal signals (i.e. selling exhaustion), as we have experienced in the past few weeks, may indicate that the current trend is up.

As we all have access to months worth of EOD wrap up videos this is of course something we can easily pursue further. If anyone is interested in spending some time on this I am sure it would be very much appreciated by everyone here. Feel free to discuss any results in the comment section – I only ask you to refrain from posting snaphots of the live chart (unless it’s from the previous day).

The good news here is that we may all have been sitting on a very handy scalping tool for the spoos and just didn’t know about it. And the really good news is that if you’re a Zero sub then you’re getting it for free 🙂