As I happily continue to trail this advance I cannot help but remind myself that it is a bit early in the season for a continued push higher. Far be it from me to second guess however and I am not one to look a gift horse in the mouth. 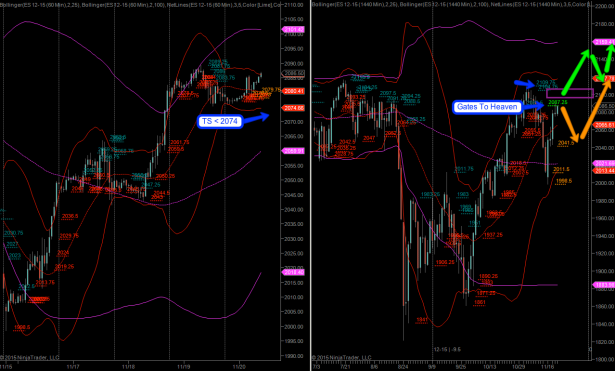 I would like however plant the seeds of objectivity early as to prepare you for the possibility of a second shake out that we may be heading into. In my experience in order for significant advances to occur we need to look out for attempts to frustrate and mislead the enemy. As we are currently in earshot of the old highs I propose two main scenarios in the coming week:

So there you go – if you’re still long right now as yours truly then do exactly nothing and let your trailing stop do the thinking for you. If you’re in cash then you do have a small opportunity for a short position here or in a few handles higher, but I would not risk more than 1/2R with a stop near 2110. 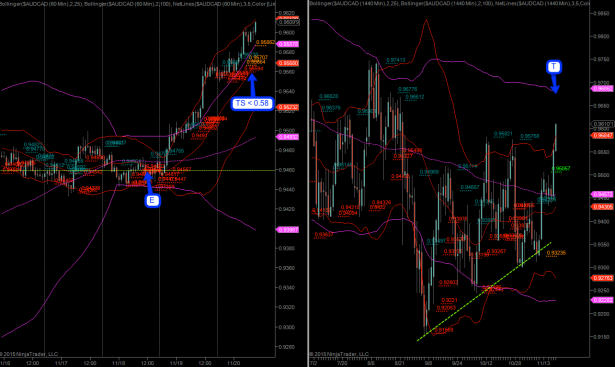 AUD/CAD Update – I’m moving my stop below that stack of Net-Lines now – my target is a few pips below 0.97. It’s been a profitable ride! Hope some of you got in. 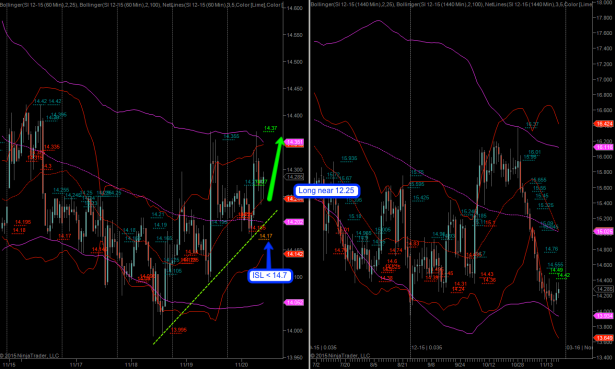 Silver may be a long on a drop toward that diagonal I painted. Stop below that NLSL at 14.7.

More setups below the fold – we have a nice collection today:

On a completely unrelated note, someone in the comment section asked Scott about the Rhonda knock out and I really enjoyed his analysis. Clearly Rhonda’s arrogance got the better of her as there was much talk about her allegedly being able to take down any male opponent. I won’t even go there but for me MA and professional fighting are often perfect showcases of what separates the 0.1% from all the rest of us. The sheer amount of hard work, dedication, and the threshold for pain it demands are not dissimilar to what we as traders face psychologically and mentally in the trading arena.

Just like in boxing there are millions of people out there who think they have what it takes to be great traders and often it only takes five seconds in a real fight when reality catches up with your hubris. As you know I have been training several arts myself for over 25 years and currently teach a rowdy group here in Valencia. However I would never dare to compare myself to a professional fighter who spends six hours per day training in the gym, facing up against other professionals under the guidance of seasoned trainers.

The same humility should be applied in trading on a daily basis as we are truly up against professionals who not only often have decades of experience but also much better tools than you, better information than you, faster access than you (e.g. HFTs), vastly more liquidity than you, and perhaps a much higher IQ than you (or access to people with advanced degrees and talent). That does not mean they are untouchable and we don’t have a chance but it’s good to always be aware of what we’re up against. Which in itself is an incentive to run like hell and never stop improving.

A final point I would like to offer is that trading, just like boxing, is an activity that requires constant practice and is not something you can learn out of a textbook. It’s great to know how to throw a basic punch, to jab, counter, hook, block, feint, etc. but in the ring or in the battle field you are operating under great amount of stress and often pain. The lessons learned right there and then will hone the type of skills you admire when watching professional fighters/warriors.

Scott said that “in that the boxing clinch/cover up is a good way to get grabbed and thrown by someone who knows judo.” Excellent point and this is what Bruce Lee called the ‘attack by immobilization’  which is part of the five ways of attack Bruce Lee describes in JKD:

By charging and overwhelming the defense Rousey manages to create her opening for her famous armbar as Scott points out. Floyd Mayweather also has mastered a loophole in boxing in that he reverses holding/hitting into hitting/holding (via his forearms and wrists). He then follows up with damaging blows as he was able to shift his opponent out of his rhythm/equilibrium. Another technique employed to break open a stubborn wall in boxing is to punch down the glove of the opponent and thus create an opening.

Which is why I enjoy very much training MA/systema as as soon an opponent clinches up I am able to get to work on his legs. I am also working on entering deeper into his attack which is something that wouldn’t work for boxers unfortunately.

This is a brilliant video that shows some of this in spectacular detail: