The Evil Has Landed

It is done – the evil has landed in Madrid. As Spain is a rather catholic country I am sure my descend has the local church on high alert. Little do they know that I have established my new lair right under their very noses! 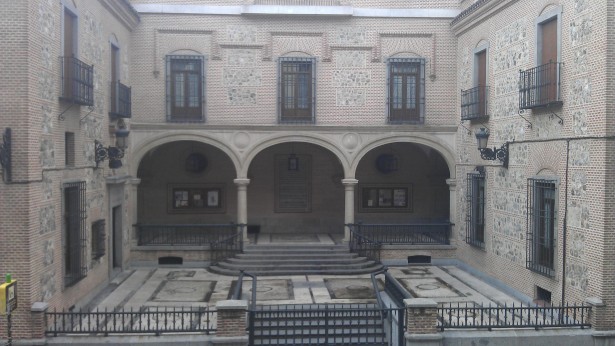 I’m not even kidding – this old church is actually my view right out of window of the piso I rented. Amazing location and right inside a busy pedestrian zone – giving me the luxury of spitting on innocent by-passers for the sheer fun of it. The only thing that’s driving me crazy is that little street concerto which seems to only have Vivaldi’s Four Seasons in their repertoire. It was fun the first three hours but by sometime tomorrow I’m going to have to knock some heads. If that happens to be illegal in Spain I plan to get myself a good ole’ ghetto blaster and show them who’s boss West Coast style. That’s right – the Mole is in the house and life in Spain will never be the same. 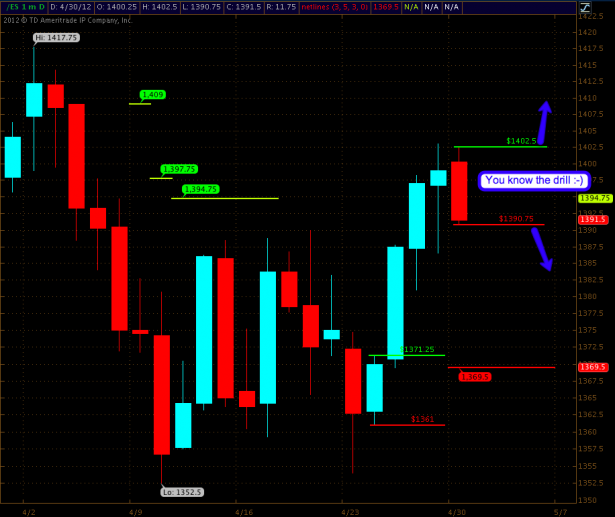 After Volar’s browser bending fire-hose post on everything you always wanted to know about SKEW and never dared to ask I was planning on putting up something special tonight. However I looked for the past few hours (it’s mid evening here) and unfortunately do not see a plethora of juicy setups. Except the rather obvious one of today – yes, again we are handed an inside day on the spoos. And you know the drill by now – if not please check the cheat sheet. Also bear in mind that the lower inflection point for tomorrow’s session has already dropped to 1389.75. 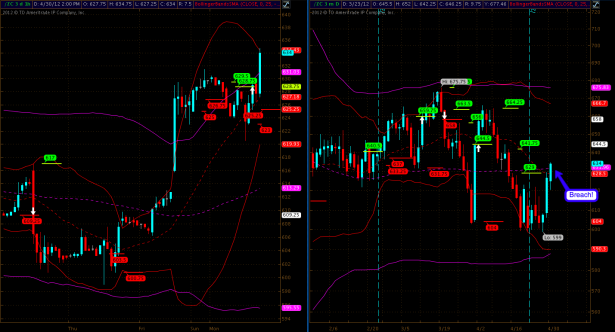 We also have a sweat breakout over on Corn – that 100-day SMA breach is what we have been waiting for. Now if you want to play options on this you may want to bug Volar for some SKEW and VOL data.

Only two puny setups – I know. Have no fear that does not mean I am losing my touch. I may be living in Spain now but there won’t be any extended siestas for the Mole. I dug around in my long term war-chest and ran into two LT charts that will put a smile on your face. Unless you don’t like chart – or have no humor – or are of Swiss descend. 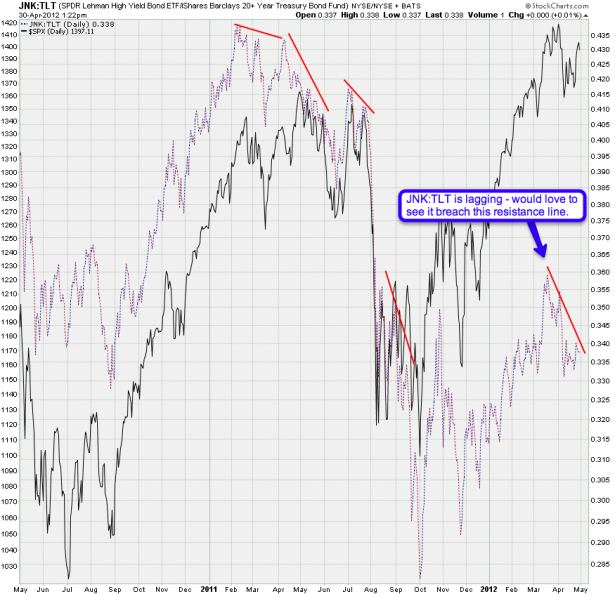 Número uno – my JNK:TLT ratio chart. We are comparing ‘income oriented’ bonds (a term that always cracks me up) to high quality treasury bonds (a term that cracks me up even more now). As of late bearish divergences are where the money is but that’s not really what we are looking at. Rather, it seems that the ratio is lagging the current advance. Sometimes it’s late and I am not about to put on my bear hat but if equities start dropping here and make a new low for the month then we may be looking at something more significant. Similarly a breach of that diagonal resistance line would be considered a break out and back up what we are seeing on the equities front. 0.33 on that ratio is where I would set an alert – a drop below that would put me on notice. 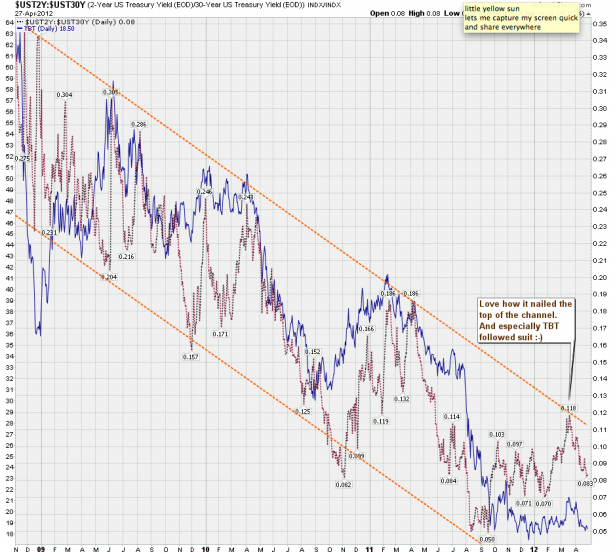 Since we’re making fun of bonds here’s another chart you want to keep handy. Either way I’ll stick it under your nose when something important happens. A little while back I was watching the 2Y:30Y yield ratio approach my upper channel. Lo and behold it did turn and has been dropping ever since. That’s the way we like it and if you wonder how the heck this can be useful then look no further than TBT – or if you want you can play TLT on the inverse.

Alright – I’ll keep sniffing around currencies for a while and if I see anything exciting I’ll tack it on right here.