The Move From Hell 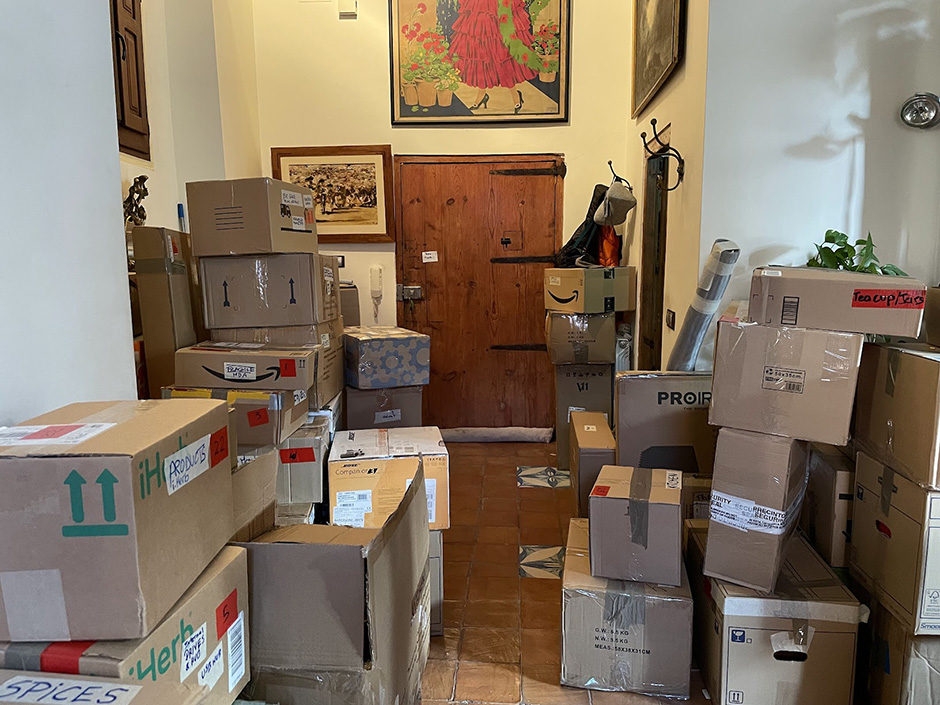 I’m going to spare you the sordid details but in a nutshell our move from Valencia up to the North of Catalonia has effectively blown up in our faces. Two moving companies in succession screwed us over, which means we are currently sitting in our Valencia apartment surrounded by a few dozen boxes while we are considering our options. Which are quickly diminishing as Christmas is only a few days away. I’m literally writing this post on my MBP positioned on top of an old shoebox. 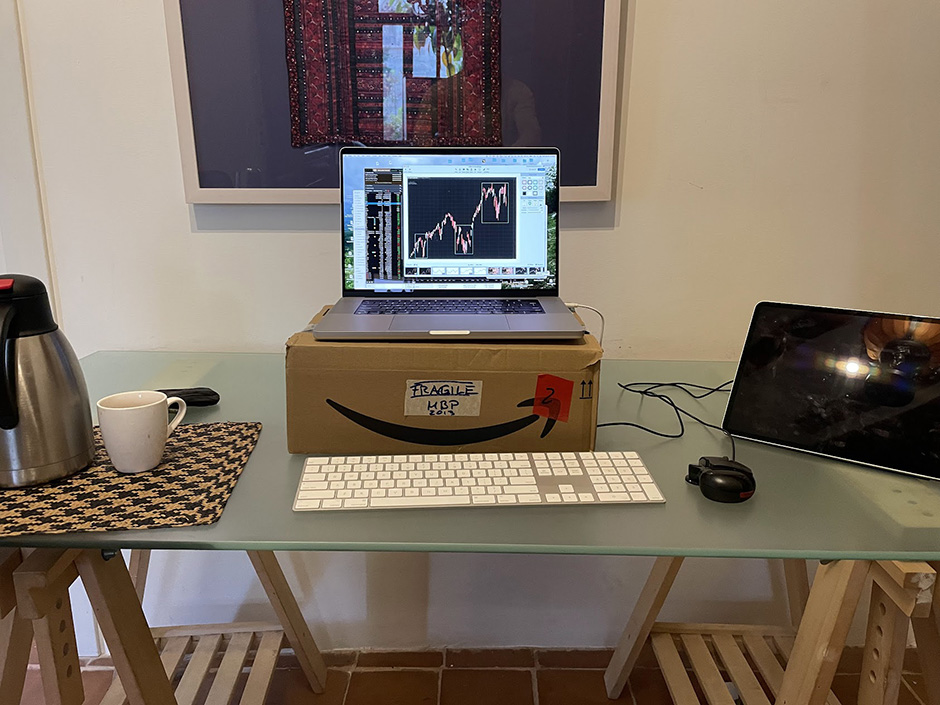 So if you think your X-Mas season isn’t all you had hoped for then just think of me and you’ll instantly feel much better. You’re welcome! 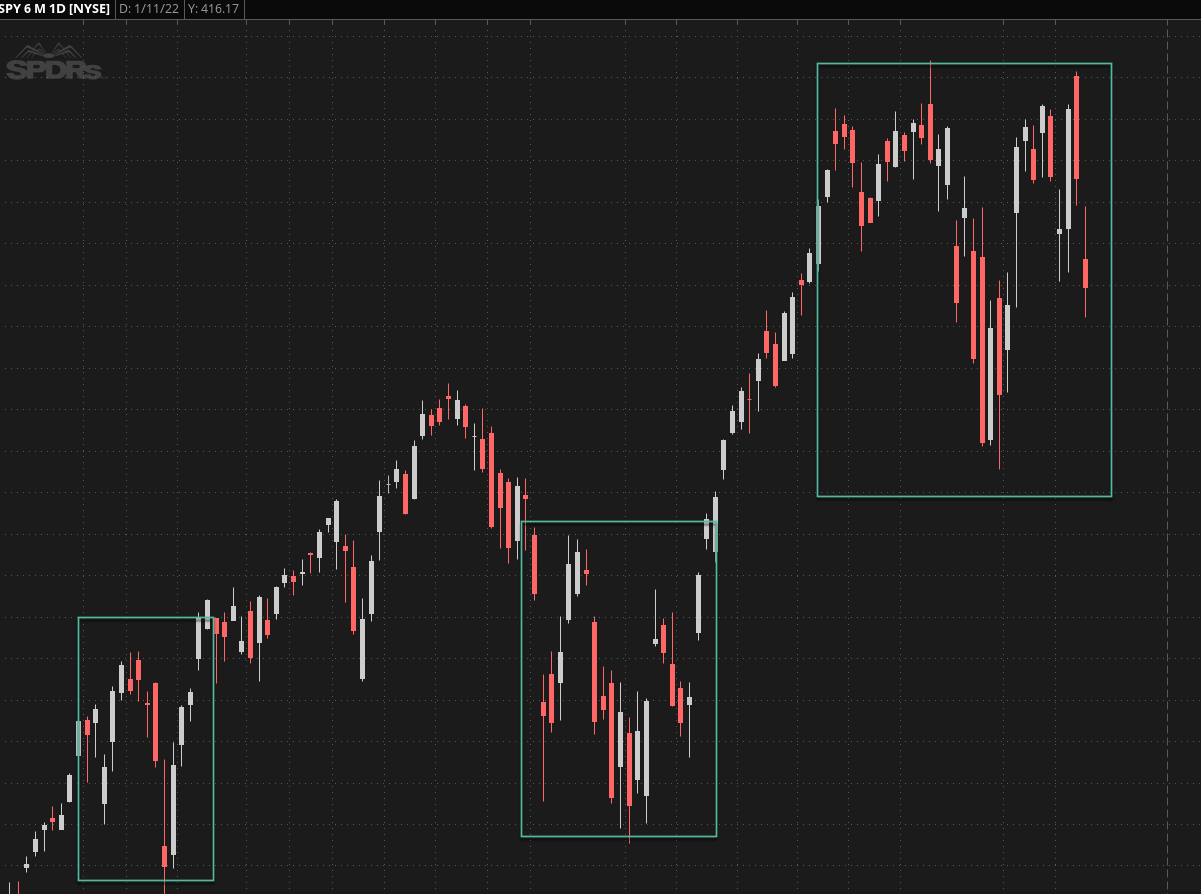 Now I don’t have much to share today but what I do have sends a clear message. What I have highlighted via the rectangles are periods of high realized volatility (RV) and such periods always mark a lack of equilibrium during which the ongoing trend has the potential to be threatened.

As of today the overall trend clearly remains to be bullish and previous attempts of a take down were met with violent short squeezes that stomped all over the short positions that hapless traders had previously been lured into.

Another observation worth nothing is that these bouts of RV appear to be increasing in magnitude, which is concerning as bull markets quite often end in a high volatility cycle. If that’s the case here then the good news is that it’s usually a process that takes several months and not just weeks.

So effectively continuation lower here would probably be met by a violent buy back followed by a retest of the previous ATHs. From there this bull market’s fate would eventually be decided by a ‘do or die’ formation that either takes us below a bearish inflection point – or once again squeezes short holders out of their positions. 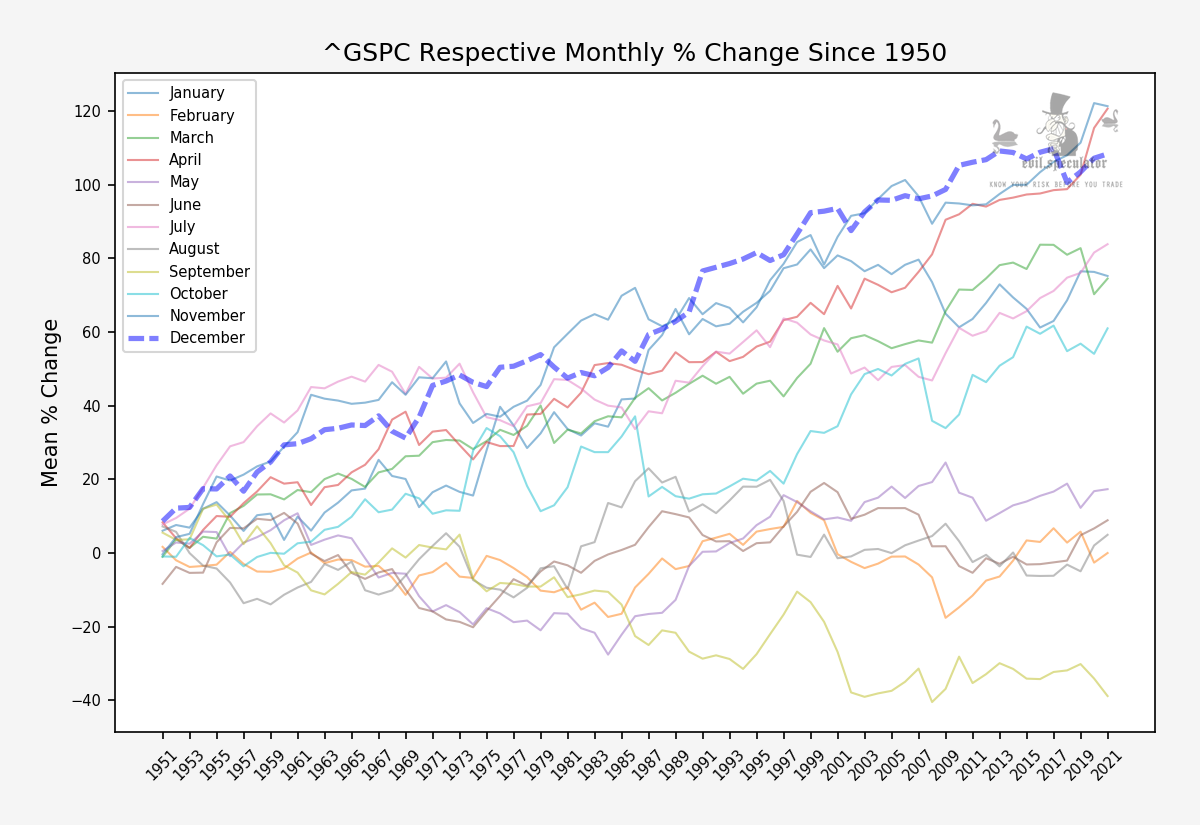 The bullish scenario is still on the table but I need to point out that statistically we are in one of the most bullish periods of the year for equities right now and the current inability to take advantage of the seasonal EOY Santa Rally is rather disconcerting. 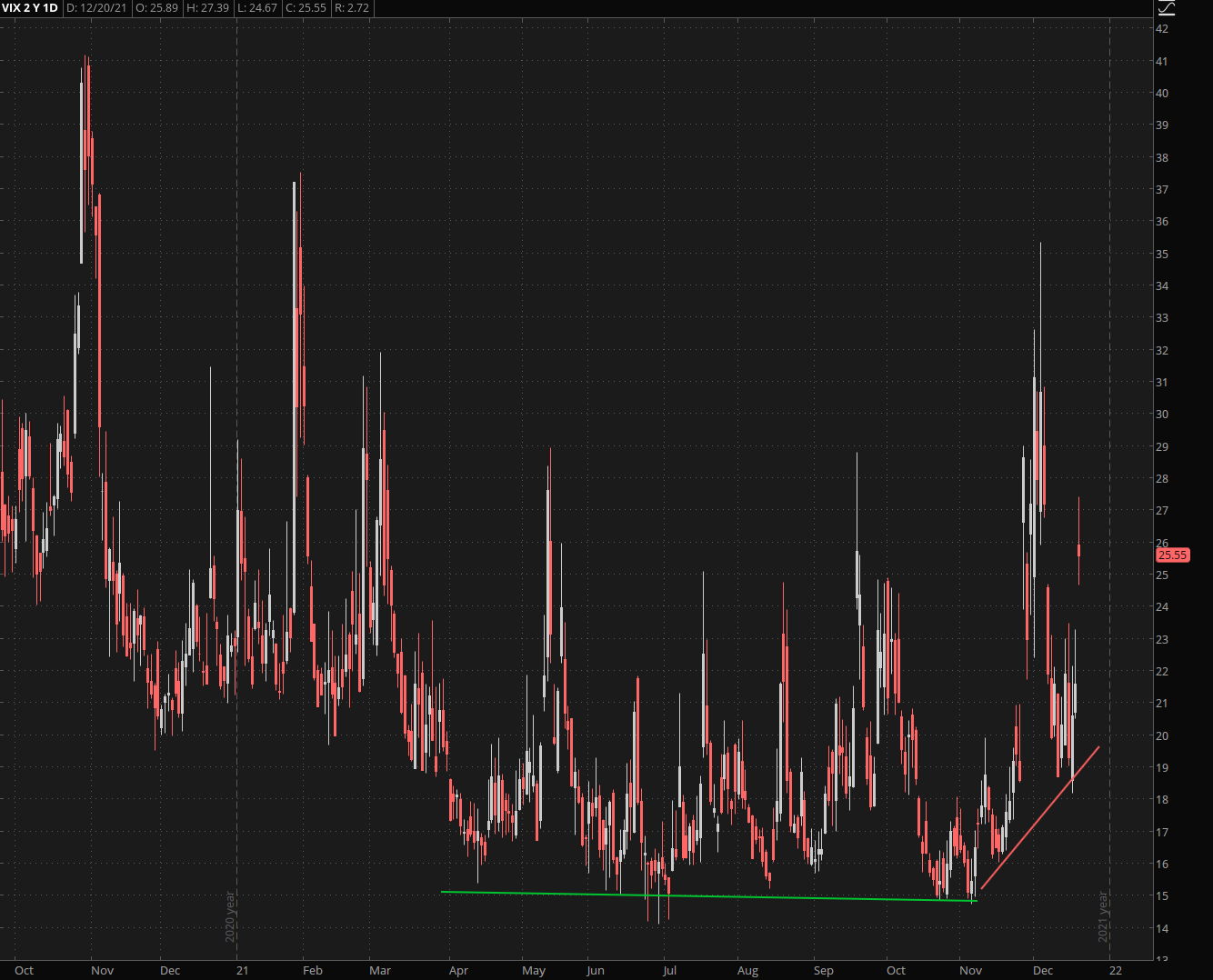 Option sellers are keenly aware of course as is reflected in the quickly rising baseline we are observing on the VIX. Which of course does not necessitate a large scale correction but nerves clearly are frayed right now. 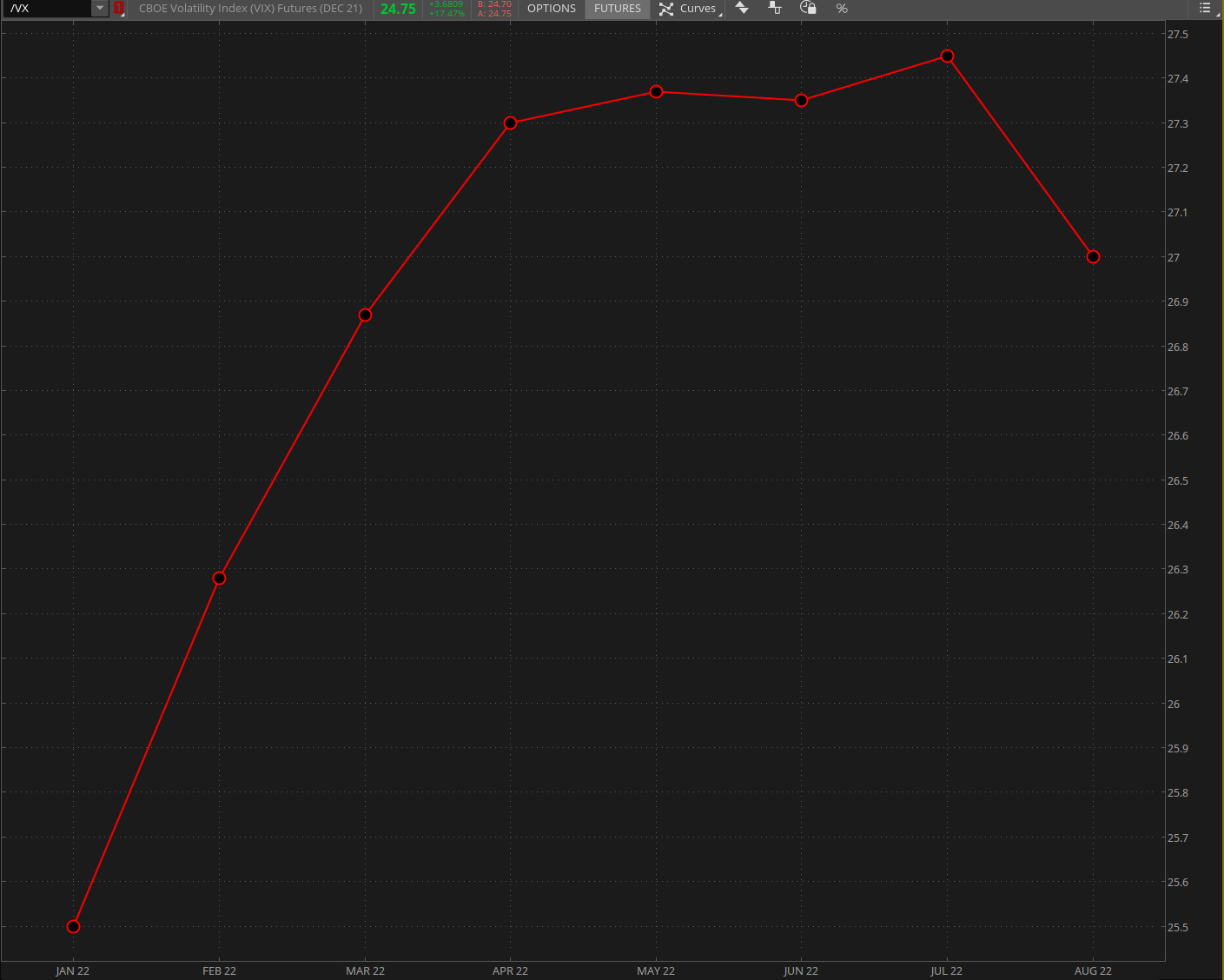 The VX futures remain in steep contango but that’s been going on for well over a year now and I would not attribute much meaning as fear of tomorrow now seems to be hardcoded into everyone’s psyche.

The time to get really worried is when we see the product depth graph flatten and perhaps even flip into a state of backwardation. Once that happens the gloves are off but thus far I do not see any signs to that effect.

Deservedly or not this bull market is still fighting for its survival and given the Fed’s unlimited bag of tricks we may just see another last moment pull out in early January.

Bottom Line: We have entered a very volatile market phase and the last thing you want to be doing is to bet on direction. Which effectively may change massively from one day to the next. If you participate then keep your position size small and your stops as wide as possible.

Better yet, join as an RPQ Unlimited member and learn how to beat the market at its game by ignoring direction and instead betting on time and volatility. If you’re interested in that shoot me an email and I’ll get you sorted.

Since this most likely the last post for this week all that’s left for me is to wish you a very Merry Christmas.

P.S.: Pro tip for your X-Mas dinner with your in-laws: Whatever you do – don’t talk about COVID! Good luck! 😉