The Fed is pretty much running out of options at this point. Their current modus operandi is to continue pretending that they want to raise rates but without real intentions of doing it anytime soon. Every month we are being served another paltry excuse as to why they’re still hesitant or that they’ll assess their timing based on the economic data. Perhaps next time it’s the humidity or waiting for the moon’s phase to line up properly.

Which means that among the few tools remaining in their arsenal to to keep equities afloat is to stomp on the Dollar once it approaches escape velocity. And given the Greek drama the timing couldn’t be any better to stick it to those dreaded Dollar bulls. And that’s going to be our theme of the day. Not because I say so but because quite a few USD related Forex symbols have moved into sync over the past few hours. 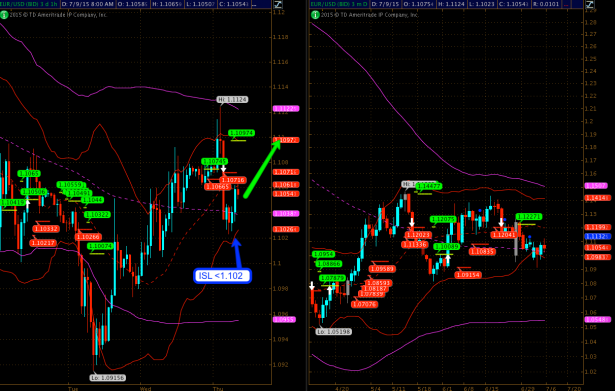 For starters I’m grabbing a long here on the EUR/USD with a stop below the recent spike low. If the 100-hour can’t be held then we’re going to see quite a bit more sideways churn or perhaps even a revisit of the recent lows. 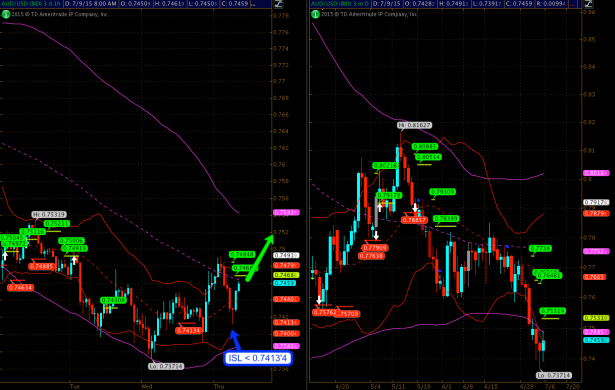 AUD/USD is looking pretty juicy here as well and I’m long with a stop below its recent spike low. Also nice to see the daily far outside the 100-day BB. Now it’s still early days here but if this thing bounces it’s high time – if it doesn’t manage a reversal here it may fall off the plate and turn into a trend trade to the short side. So short positions on a stop out may be possible here. 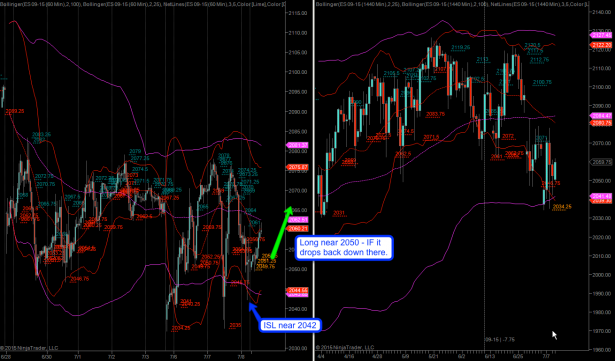 The E-Mini isn’t among my favorite charts right now but if I don’t talk about it you guys are most likely to ride me out of the lair on a rail. So here you go – a possible long setup on the spoos if it drops to 2050. May not do it though so don’t chase it.