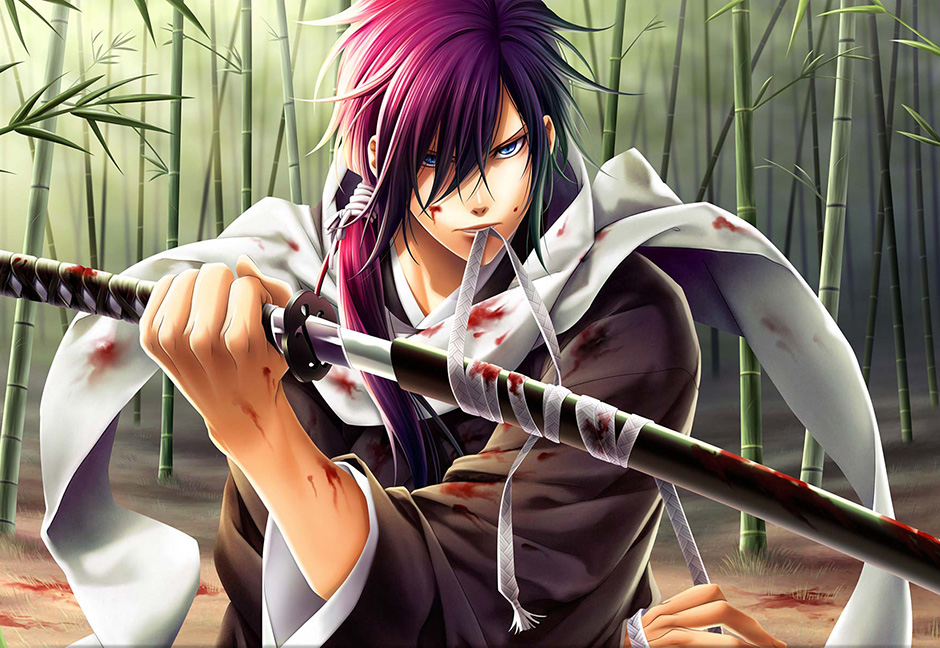 Today marks the last official trading session before the CME equity futures (i.e. ES, NQ, YM) roll into their respective September contracts. Keep in mind that the June contract does not end here but continues to be active for another week or so. However most of the trading volume will now shift into September and if you’re holding any equity futures contracts then you would be well advised to follow the herd into the new pastures. 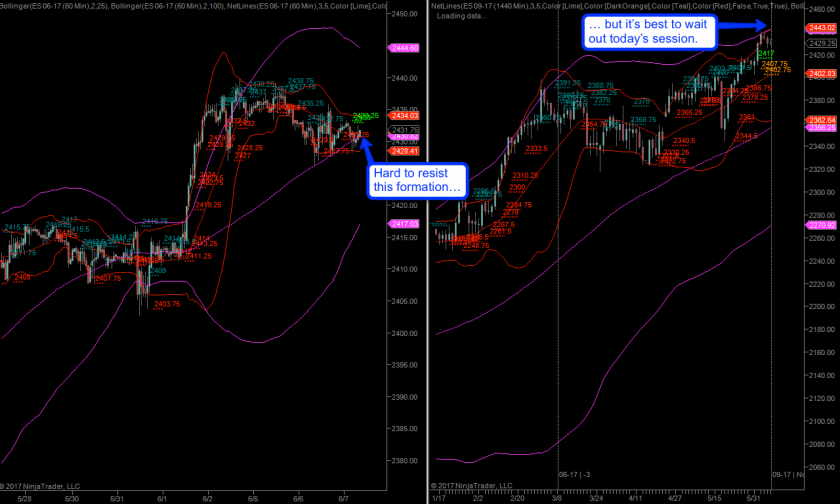 As you know I usually stay away from any contracts which are in the process of rolling. Which is why it is rather annoying to see such a juicy looking formation on the E-Mini this morning. Under normal circumstances I would be all over this like a fat kid on a Mars bar. But unfortunately I’ll have to sit tight on this one until tomorrow, assuming of course the setup remains intact. Which setup? Well, wouldn’t you like to know? 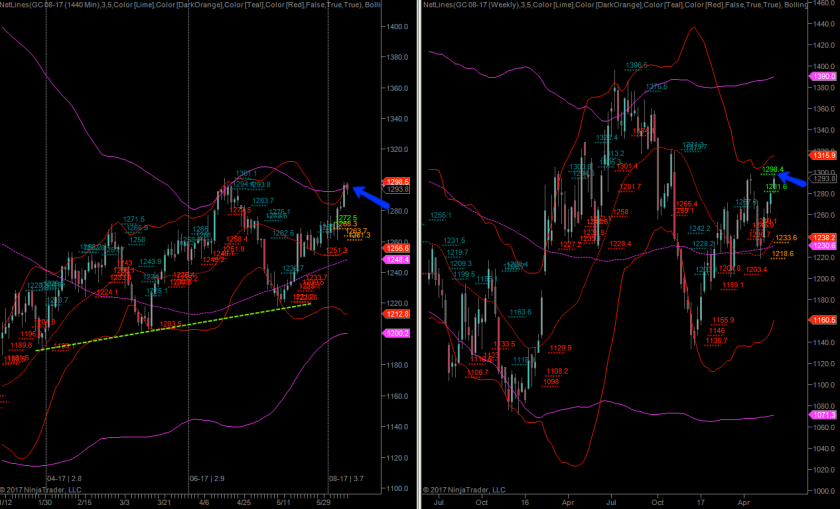 That however doesn’t mean that we’ve got nothing to do. A reader asked me about gold being a possible trend trading candidate, and I agree but with a caveat: First up traditional trend trading (i.e. buying high and selling low) hasn’t worked very well even for the pros during the past (QE infused) decade. Also, the odds of banking coin as a trend trader in general have never been great, not so much because of the low win rate (35% or less) but due to the fact that most retail participants don’t have the psychological make up to actually sit out both the losing streaks and the drawn out winning streaks. In short – it looks good on the surface of a chart but it’s a very tough racket and few can pull it off.

Of course where there is a will there is always a way. My personal approach is a bit more involved but has the advantage of allowing you to slowly scale into trend entries as opposed to jumping in with both feet every single time. What I do is to first gauge the long term charts, e.g. the daily, the weekly, the monthly. if those suggest the potential of an inflection point preceding a trend move then I’ll look at my hourly panel for a plausible entry opportunity. Which is often tricky as preceding long candles often yield very little short term context. 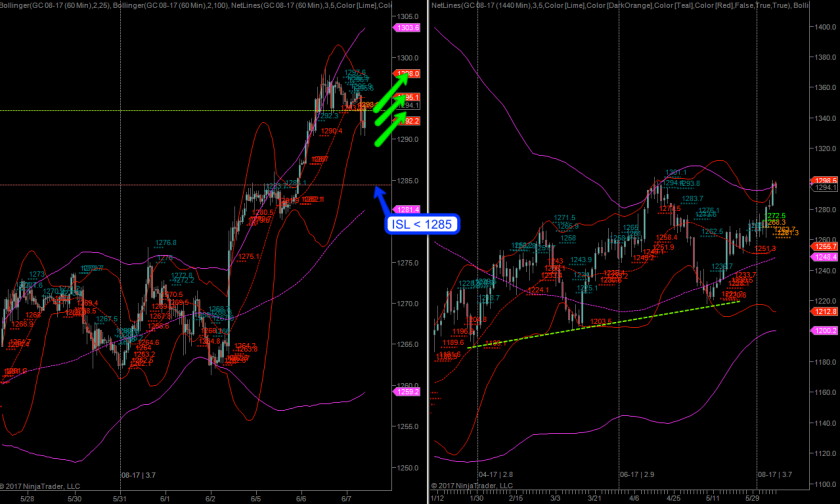 On gold today for example we have been graced by a little spike low which could work for our purposes. What I just did is to deploy only 0.25R with a stop a very respectable distance away. BTW the entire entry range extends further down as shown on the chart but remember that you always want to see a spike low, a Net-Line, a moving average or anything else you can hang your hat on. 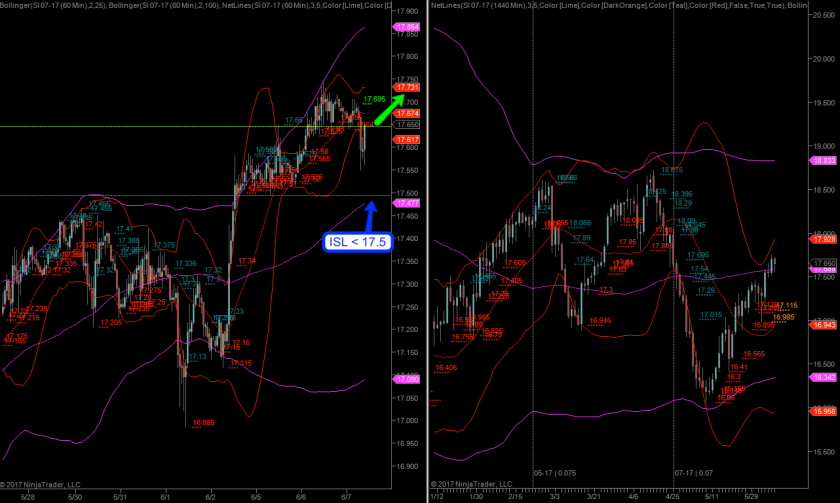 Silver is where I’ll deploy another 0.25R in order to decrease the odds of being thrown off the horse by a stop run. I actually like this chart a lot better as the 100-day has just been conquered and is already in the process of trending. Officially this is not really a trend trade as we’re not anywhere near the upper Bollinger. But heck, if the preceding ramp doesn’t count as a trend then I don’t know what does.

Odds have we’ll most likely get shaken out. And if we do we’ve lost very little coin and will have to try again later. But if gold and silver decide to head higher then we can start adding more exposure slowly, perhaps on a little dip lower or even a retest of the original entry range, both of which often leads to continuation higher. This soft entry approach makes trend trading a lot more tolerable as you’re not betting a full R every single time. If also often leads to counter entry opportunities, e.g. when the market clearly hates your idea and is most likely to reverse back to a previous support range.

Alright, I trust you are sufficiently warmed up and caffeinated because we’re just getting started – very exciting setups below the fold: