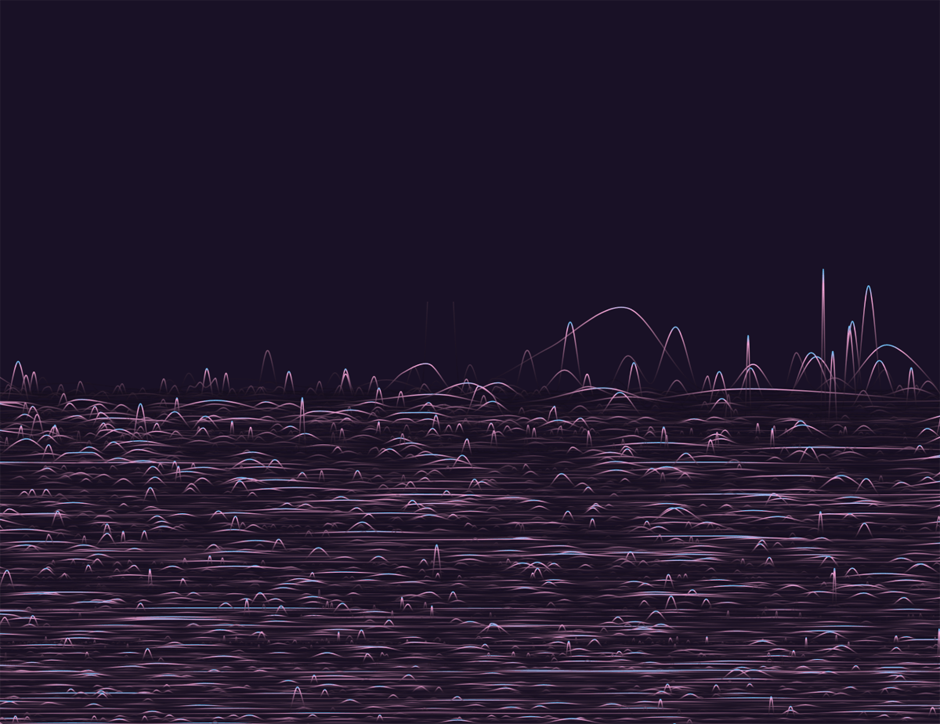 It is Mario Draghi’s turn to torment market participants this morning, which means a market overview will have to wait until the wave of volatility has washed over us and hopefully left some of our open campaigns intact. In the interim I decided to channel my inner Nicholas Taleb and ruin your collective day by singlehandedly smashing what you hold most dear as traders, i.e. your perspective on how markets function and your ability to anticipate what may come next. And if you think I am joking then you are most likely doubly mistaken. Read on at your own peril: 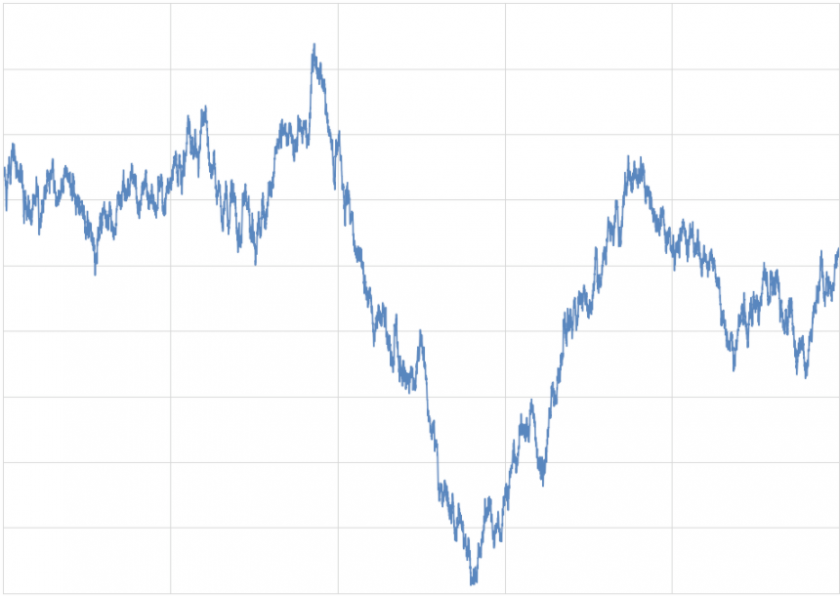 Still here? Very well then. Take a look at the chart above and then grab a piece of paper and write down your thoughts about what you are seeing. Would you trade this chart? What are your general impressions about it? Do you see any entry opportunities? Are we perhaps counting waves or looking at specific cycles? When you’re done please follow me to exhibit B: 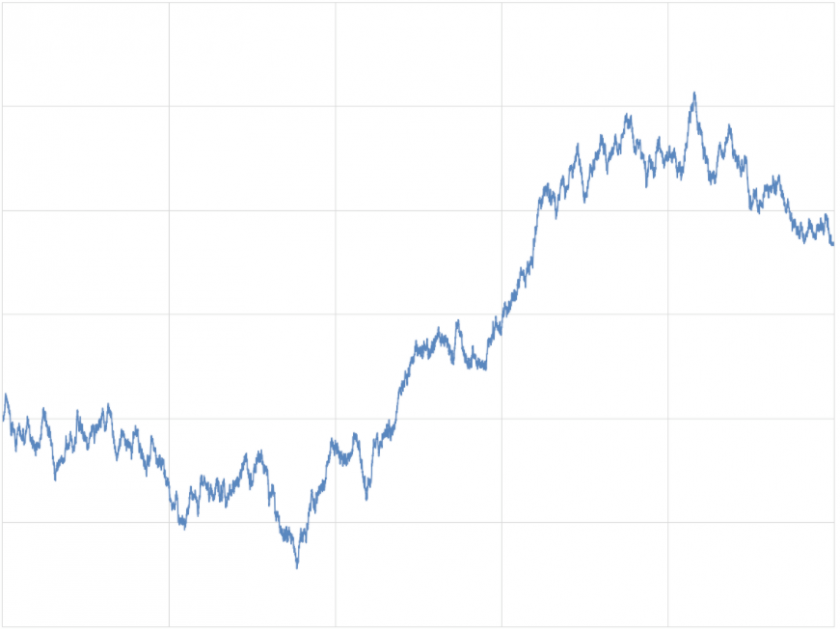 I tell you what I think. Not a bad chart at first sight I’d say but it has its periods of sideways volatility. But when it gets going it really ramps so a trend trading system here may just work fine. Playing the swings may also work if you slap a Bollinger on it. Do you agree? Disagree? Make not of all that and then follow me to exhibit C: 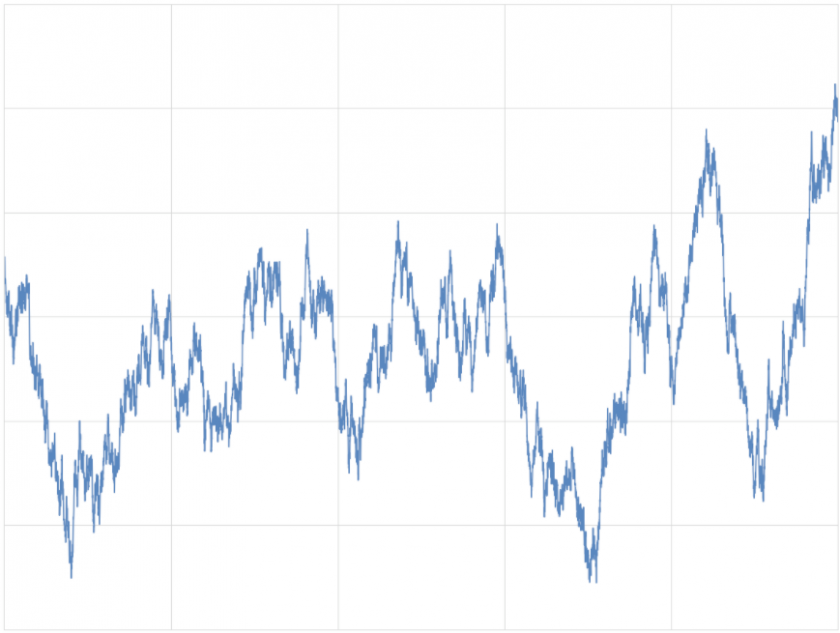 Ouch, not a chart I would want to be trading – that looks pretty nasty. That’s usually the type of tape I try to avoid. Although it has trending periods it seems to turn on a dime at a moment’s notice. Agree – disagree? Take note.

I’m sure your curiosity has peaked by now and you wonder what the purpose of today’s exercise may be. And the sad truth of the matter is that it’s all nothing but noise. All three charts above were produced purely by the power of a simple python script using a vanilla random function:

Trust me, I know how you feel – it’s like the floor just gave way underneath you and took with it all the technical trading knowledge you’ve accumulated over the years. The good news is that it’s not as bad as you think, if that makes you feel any better. Let me explain. Over the past few years I spent quite a bit of time investigating fractal patterns in financial data series. A major aspect of my work was the use of machine learning tools in combination with time series classification parsers to find recurrent patterns, also called ‘motifs’. Some may call them fractals although technically speaking fractals are self-recurring on larger intervals, so I usually prefer the term motif as we normally look for the same recurring pattern within the same time window.

Turns out that I actually wrote a multiple-dimension parser and parsed for the same motif on a series of time windows, so in the end a fractal it is. What I learned in months of testing is that there are in fact recurring fractals in financial time series. However, the type and frequency significantly differ from one symbol to the next, plus the number of recurring patterns/fractals/motifs only account for about 5% of the series. Which means that 95% of it is noise, or more correctly what is known as a ‘random walk’.

All Models Are Wrong, But Some Are Useful

So is everything we have learned about the markets complete horse wash? Are there in fact no technical patterns and are we fooling ourselves? Well, yes but no. In the words of George Box (one of the great statistical minds of the 20th century): “all models are wrong, but some are useful.” In reality there is most definitely a significant amount of randomness to all financial markets. But I would call it ‘guided randomness’ because in between the noise are the actions of human traders who look at a chart and believe that buying or selling at a certain threshold makes a lot of sense. And as such it often becomes a self fulfilling prophecy, because just like water it seems that a random walk simply follows the path of least resistance and then finds its next level. Which of course may explain why ‘following the herd’ works so well until it doesn’t

But still two of those random charts I posted above look pretty tradeable, don’t they? Which makes one think of course whether or not the true key to profitability and success as a trader lies in picking entries. And of course we already know that it doesn’t because markets change all the time and so do the systems that operate successfully during any arbitrary trading period. Meaning you may be picking great entries like your nose one quarter and then lose it all back and then some doing the very same thing the next.

We’ve talked about self control many times here but let’s set that aside for now. Focusing on the remaining 40% only half (i.e. 20%) supposedly should be devoted to market analysis. I think that’s a vast over estimation and my own belief is that market analysis should account for not more than 5% of your trading. A lot more time should be devoted to campaign management, risk management, and capital commitment.  Which are activities that are by definition a lot more analytical than technical. Instead of reading charts to find entries we should be spending a lot more time analyzing how to extract maximum returns on entries we have been taking. Of course as a financial blogger that would most likely reduce my audience by a significant margin.