Quite frankly I just about had it with all the fiscal cliff nonsense. Way too much drama for my taste and at this point equities have turned completely spasmodic. Look, it’s the last full trading day before Christmas (Monday will be a half day) and usually the tape is running on auto-pilot squeezing the bears all the way into New Year’s Eve. The fact that we instead are jumping all over the place is very bad medicine and one ought to wonder what comes next – fiscal deal resolved or not. Whether or not the bi-party brinksmanship in Washington runs out the clock or results in some ‘last minute deal’ doesn’t really matter. Uncertainty leads to unpredictable moves and they in turn lead to losses. 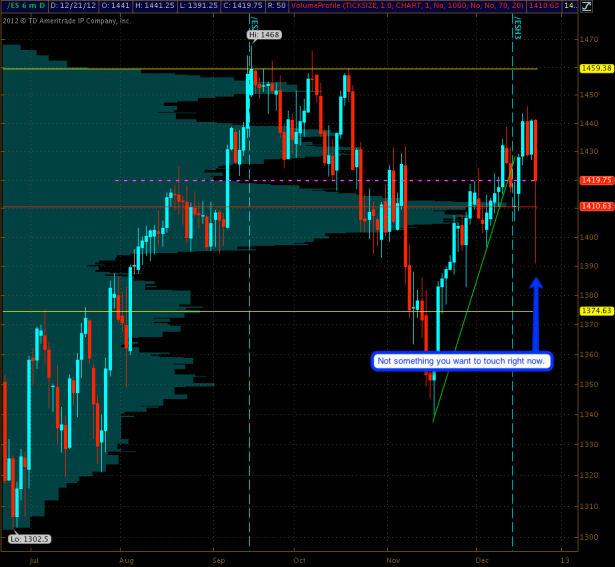 Look, I make this very simple for you guys – look at today’s E-Mini chart and ask yourself if you want to be trading a market that paints these types of candles. Make no mistake – until the music stops on December 31st there is a good chance we’ll see something similar again next week, perhaps this time spiking in the opposite direction. I for sure have very little appetite for being caught in the middle of this. Always remember, we don’t have to trade – as a matter of fact, one of the best lessons you’ll ever learn is that of knowing when it’s the right time to act and when it’s time to sit back and let someone else get chased around the block.

Until this thing sorts itself out I cannot recommend any participation on the equities side. Keep your powder dry and simply wait a week until all the media mania subsides and reality takes over – in one form or the other. Until that happens the risk/benefit ratio in equities is simply not justifiable. 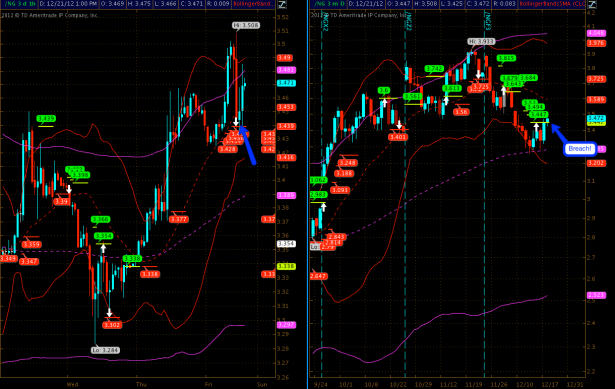 Quick update on our natgas play – it now breached its daily NLBL and thus we are long with a stop below. The 25-hour seems to act as support and you can use it to slowly advance your stop. However I would give a session or two until you do as you don’t want to get kicked out early. 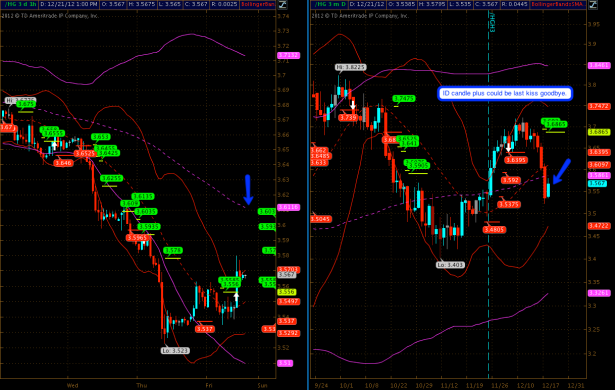 Copper meanwhile is painting an inside day just below its 100-day SMA. This is interesting as it could be a last kiss goodbye before it heads lower. Of course a push back above the 100-day SMA would be a failed (downside) breach and thus a long opportunity. In either scenario you can simply play the inside day candle triggers but it’s also possible to be short right here with a stop above the SMA. Hope this makes sense. 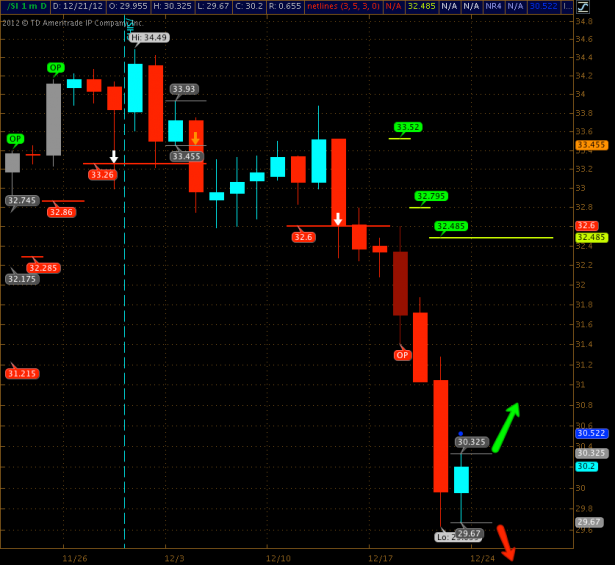 Silver has been embracing the pain but it suddenly painting an inside day candle. I’m a bit conflicted on this one – usually I would prefer a long breach here but since we are not at target yet I may also take a continuation lower. Either way I’ll probably play it fairly small. As I pointed out above – way too much drama out there.

I’ll be posting a brief LT update on Sunday and expect to be putting up a Monday Morning briefing, assuming of course there are short term setups to be had.