A few weeks ago Scott sent me a pretty fascinating article on equity curve trading which after perusal triggered a major brain quake followed by a flurry of activity over the past few weeks. The whole affair started in response to Ivan Krastins bitching at Scott (and thus implicitly at me) for not considering certain EC techniques that he apparently teaches to his own students. Most of them practice things like ‘stop trading after x drawdown in a month’ or ‘increase position size after x losers’ etc. A bit all too vague for my taste but I was interested enough to dig a bit deeper on this. Which of course meant letting Scott do all the statistical heavy lifting – he’s good at that which is why I keep him around. Turns out equity curve trading (ECT) works best on one-size-fits-all and marginal systems with large dependency (a term explained in the article), so looking at our recent equity curve our suspicion was that it may just be tailor made for CrazyIvan.

For the record, Scott and I have always steered clear of any manual intervention – meaning switching systems off and on – thinking it was a subjective way to curve fit a marginal edge. But after being schooled on dependency and how it can affect high dependency systems we had to concede it to be totally valid concept. Of course now you may just want to know how dependency and thus equity curve trading may affect Crazy Ivan – would it actually benefit? Well, I’m glad you asked as Scott ran the stats about two weeks ago. And here they are: 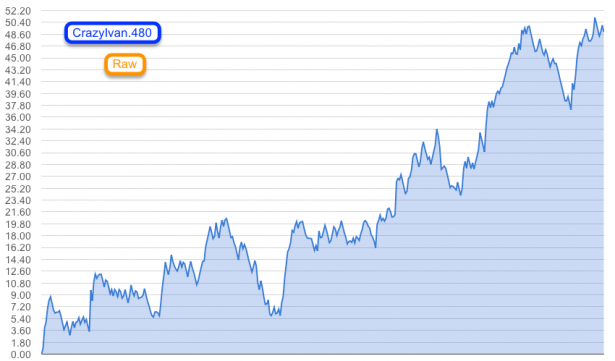 The is the unfiltered version which ran through 379 trades this year and is currently still hovering around 50R. That’s right on track and we’re optimistic it’ll keep up the good work. 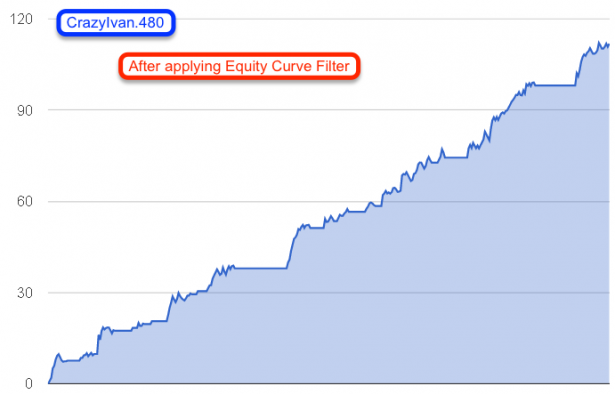 Now this is the equity curve filtered version which only would have taken 141 trades this year by the time we ran the numbers. Results in R – 115R!! Boy oh – boy! How did we do that?

Now to be clear, this is the exact same system – same settings, same time frame, same instruments. The only difference is that we slapped on an SMA(12) on the raw equity curve (which is basically the first chart). Any trades below the SMA were skipped and when the raw equity curve slipped back above the SMA we would continue taking trades.

Now frankly there is really no magic to this – and it’s a ridiculously simple technique. The reason why this works so well on CrazyIvan is that it obviously has high dependency – i.e. you get periods of consecutive profit taking followed by stretches of draw downs. Over time it comes out on top, assuming of course you are able to sit through the rough periods. Of course we had considered various approaches to avoiding those drawdown periods – the one we actually implemented was a volatility filter based on Ken Long’s VolStat and StretchStat indicators. In theory the vol-filter was supposed to avoid those nasty sideways periods which we knew were tough to sit through. But when we actually ran it this way we actually saw a decrease in expectancy and in the end we just decided to let it run pure (since early January0. Until now that is.

As you can imagine, once I collected my jaw off the floor I was getting pretty antsy about implementing an EC filter into CrazyIvan. Scott ran through the numbers a few times and it seemed that anything from an SMA(10) to an SMA(15) was working just fine, so we settled on the 12. There were however unforeseen challenges which had to do with the fact that we run CrazyIvan on a 480 minute chart, that’s eight hours. So it’s very much possible that the SMA is being breached but it’s not ‘on the books’ yet until a day or two later when some of the open campaigns actually settle. Of course the Mole wouldn’t let this one sit and I came up with a pretty creative solution to the problem (which one I won’t tell you of course – hehe).

I’m still testing it on my end but I expect it to be deployed into production either today or tomorrow, so all CrazyIvan subs can rejoice! The only difference you will see going forward is an additional instruction in your alerts. Here is an example:

Right below the risk field you will now find a ‘risk ratio’ field which tells you how much of your equity we recommend risking. Now until now that has implicitly been 1% (more or less being at your discretion) but we now recommend a risk ratio based on our equity curve filter. All the heavy lifting is done behind the scenes and you don’t have to worry about making any changes on the trading front. The only difference is that you will either trade 1% as usual or reduce it down to 0.1% (or nothing). We decided to use a fractional position sizing approach as it’s better if you adjust the SQN formula accordingly (a topic for another day). But you of course have a choice and so during EC down periods you may get alerts that say this:

So this is pretty easy – if you want to trade fractional position sizing then take only 1/10 of a percent or skip the campaign altogether (for a fixed on/off EC approach). The math is simple as you can just change that field in our handy futures (or forex) risk calculators. Here’s how you would do it: 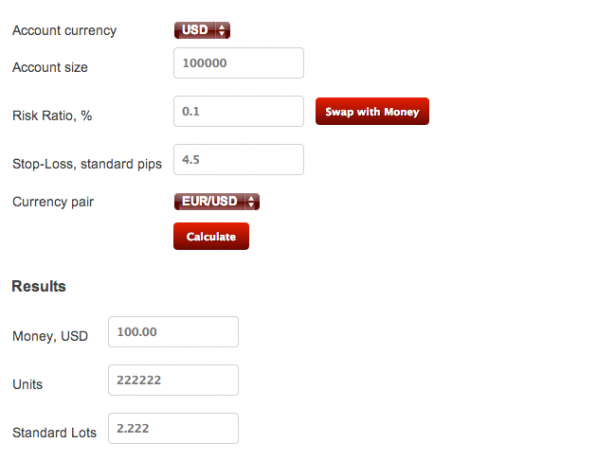 You can click on the image to get to the actual calculator. So by simply by changing your risk ratio to 0.1% you are now following the system by the book. Of course if you think that’s all humbug and that you prefer to trade as always then simply ignore the risk ratio recommendation and Bob’s your uncle.

Scott and I are pretty jazzed about all this and we are very curious how the new EC Filter will affect the system moving forward. We will continue to post equity curves based on the filtered and unfiltered version of course – all my server side logging accounts for both. I also think that this will make a huge impact on you subs as draw down periods promise to be rather shallow compared with what we usually had to deal with. As of now the average draw down was 10R and if the system runs long enough you may have experienced a worst case scenario of 20R (my motto is to always expect the worst). Given the EC filter however this cuts draw downs to 5R or less and the worst case scenario to 10R and even that would require six or more consecutive losers with very bad fills, meaning they would all overshoot our 1R stop. Not impossible but rare.

The article I referenced mentions near the end that not all trading systems will be candidates for equity curve trading techniques (i.e. Heisenberg is NOT), but if you have a system that is, the results may be well worth the effort. Well, after running the stats Scott and I both agree that CrazyIvan is a superb system for EC trading and moving forward I hope we’ll all reap the benefits.

If you are interested in giving CrazyIvan a shot then I suggest you work yourself through the intro/tutorial as well as the order flow page. If you still have questions after all that then feel free to shoot me an email to admin@.