I posted the following on the Slope but the offer at the end of the post extends to any non-subscribers over here as well:

I haven’t been posting here in a while as I have been busy keeping my own shop running in the face of what is probably some of the most frustrating tape on record. However, instead of whining and complaining to spend the time upping my game, and over the last year my counting of Elliott waves has slowly been relegated to maybe ten percent of the work I present on a daily basis. The rest is a healthy mix of exotic momentum charts and hand rolled indicators which I believe have kept me and my stainless steel rats out of harms way in recent times. 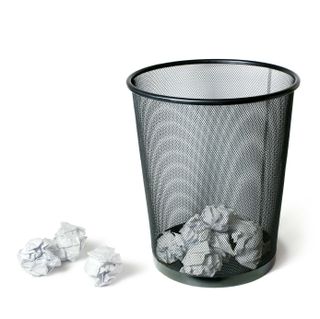 I still believe that EWT as well as traditional TA has its place but in today’s narrow markets those technical approaches have become somewhat antiquated and – as some of you may have learned the hard way – to purely rely on traditional TA or sentiment/momentum measures has been a rather costly exercise in futility. Again and for the record: EWT has its place – I personally continue to use it for projecting the force and length of an ongoing wave – and for that it has served me well. Just don’t try to use it for predicting major tops or bottoms 😉

And it’s not just us retail traders. Case in point: Even some renowned hedge funds have been calling it quits. Most recently Paolo Pellegrini followed Stanley Druckenmiller into the sunset. The reason given was ‘challenging market conditions’ which roughly translates into ‘we’ve lost our asses.’ After all – nobody quits when they’re ahead. Well, I know one – but that’s a different story. The rest of the hedge fund industry is in the process of consolidating and one in five funds may disappear by the end of next year.

Even ole’ Timm-ay has been throwing in the towel in disgust a few times – and who could blame him? For the past eighteen months it seems the bears have been doing nothing but spinning a big hamster wheel in fifth gear. The end result? A lot of motion and commotion – but very little progress. Many a staunch traders – bearish and bullish alike – have been falling by the wayside and whoever is left to date is exhausted at best and ready to give up at worst. Trading was never easy – but these days it’s tantamount to mission impossible. 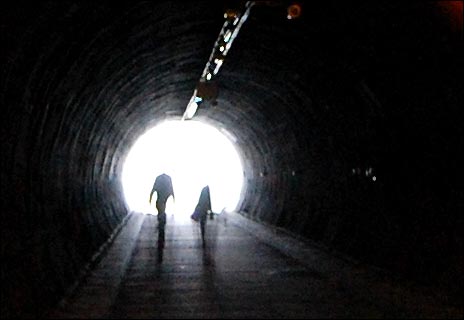 Is there light at the end of the tunnel?

I most whole heartedly believe YES! And I base my arrogant disposition on two simple lessons learned:

The first one, which should be obvious to us all now, is to not be a bear in the first place. Don’t be a bull either – be a whore! Yes, when it comes to trading the tape you must become the equivalent of a promiscuous debutante willing to wrap your arm around anyone willing to pay your way. Which means the person on the other side of your trade.

Actually over on Evil Speculator we call ourselves stainless steel rats – not exactly a more endearing term but if you have a thing for old SciFi novels you probably get the meaning. In any case – not getting married to a particular trading direction sounds a lot easier than it actually is – especially when you find yourself on traditionally bearish trading blogs. I could go into lengths about various cardinal sins – a.k.a. cognitive biases but I will spare you – this time. This is among my favorite topics and expect me to cover this in more detail in the near future.

The second big lesson is equally simple. Use whatever works! Yeah right Sherlock – tell us something we don’t know! Well, you’d be surprised how many folks make the mistake of getting married (that term again) to a particular trading system or a particular collection of trading tools. Maybe it’s one you proudly and painstakingly devised yourself and you just can’t let it go – even in the face of recurring losses. Understandable – perhaps you have spent weeks or months tuning your system – but does it bank you consistent coin? If the answer is no then into the circular file it goes.

Of course that doesn’t mean you should be jumping from one system or indicator to the next. Take your time and be a discretionary shopper when it comes to picking a particular system and the tools that come with it. Don’t have an ego about it either – some people need to understand how a particular indicator works otherwise they don’t touch it. Well, I personally do look under the hood when I can (I’m inquisitive like that) but give me a proprietary one that works consistently and I will use the damn thing. That of course brings me to my Zero Pimp-A-Thon. Let me show you what has worked for me – and some of my intrepid steel rats over at the digital den of doom.

What Works For Me – the Zero!

The idea behind this post was to introduce you to an indicator I started developing about two years ago and which has over time turned into the most important discretionary trading tool in my growing arsenal. I call it the Zero and if you want to learn more about it please point your browser here. 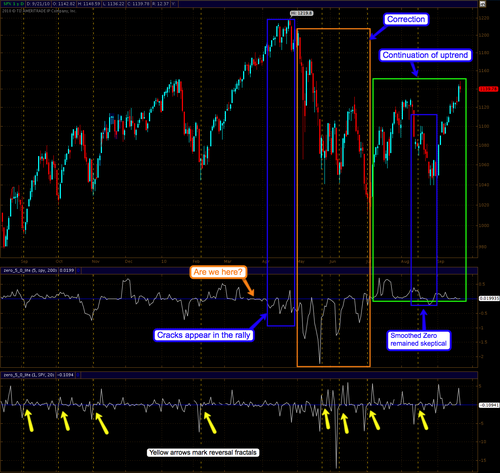 And here it is. You might want to click on the image to zoom in as there’s a lot of detail. Again, today I will cover only the daily Zero (there are two more) as that one inspired me to write this post in the first place. If you guys are interested I may follow up by covering the two remaining ones – the Primary Zero and the Zero Lite.

So, what’s so special about it?

Most importantly the daily Zero gives us unique insights on the direction and state of the current trend and it does so in a very simple way: If the signal is above the zero mark the trend is bullish – if it’s below the zero mark it’s bearish. That simple rule also serves us on the Zero Lite, which we use quite regularly to catch intra-day divergences on the ES futures, similar to what you may see on a stochastic or MACD (check out the tutorial/info page for more on that).

The daily Zero also paints divergences and I have highlighted the past six occurrences on the chart above. As you can see every time we painted a significant low it was accompanied by a divergent fractal pattern which suggested that it was time to go long. It also seems that the stronger the divergence the more violent the snap back. Now that in itself is extremely valuable in my book – but wait – there is more (and it’s not a Ginsu knife set):

A few months ago I started to experiment with the settings and in the process created a smoothed version of the daily Zero – it’s the panel in the center. What immediately sprung to mind was that the smoothed version seemed to visualize a weakening trend by painting a divergence and a continuation of the current trend by either remaining above or below the zero mark. I have annotated the upper two panels to that effect and I think it’s pretty self explanatory. If not please ask and I will try to explain.

So can you trust it? Well, most recently I myself watched the daily Zero stay above the zero mark despite the tape dropping and getting close to making new lows. Bear in mind that I just recently had configured the ‘trend panel’ in the center, so I was extremely suspicious. The bears all expected a continuation of Primary 3, so this was a big thorn in my eye. But I trusted it enough to keep bringing it up to my readers (along with some of my other charts) – and as a result many of us did not get get squeezed into oblivion by the recent melt up – quite on the contrary.

Where Are We Heading Now?

Glad you asked. Well, if you look at the current signal it mostly resembles the period of late March of this year (the orange comment on the chart). We had just ramped up quite hard and then just kept melting higher on zero participation/volume. Sounds familar? Exactly – and this suggests that we may get a little reversal here but that the up trend will continue until we see some cracks in the tape again.

What do you mean by ‘cracks’, Mole? Well, just look at the center panel during the late April period – those are some pretty pronounced divergences. That’s the kind of stuff I’m looking for. A drop below the zero mark while we grind higher – maybe even make new highs. If I see that I will happily start loading up on front month puts and a few short positions.

And if we get a fast drop here I will also be on the lookout for selling exhaustion – hopefully again highlighted by a fracal pattern on the raw signal shown on the lower panel.

Can You Live Without The Zero?

Abso-diddly-lutely! If you know what you are doing there are many market momentum indicators and oscillators you can consult or combine to get a better idea of whether the trend is going strong or if the tape is lying to you. The power of the Zero is that it makes life a lot easier and that it has stood the test of time. I started development two years ago and have not made any major modifications in over a year – it’s the gift that keeps on giving. The reason it works so well is that it gives us a glance beneath the hood of the market – a strong positive or negative signal suggests strong participation on the buy or sell side. A flat signal indicates that the current tape cannot be trusted.Divergences suggest that the tape is running out of steam.

I hope this stimulated your appetite a little – if you have questions please feel free to email me at admin at evilspeculator dot com. As a matter of fact – since I feel frisky tonight let me offer you this: If you are interested in giving the Zero a spin write me an email to the same address with ‘Zero Pimp-A-Thon’ in the subject line and I will reply with instructions on how to get two free weeks of Zero goodness. If you’re not hooked after that – well, it was worth a shot. But I have an inkling you will acquire a taste for it.

P.S.: My weekly update is now freely available to everyone. It’s a monster of a post and it covers the entire gamut. It also suggested the tape would melt up – had to point that out 😉