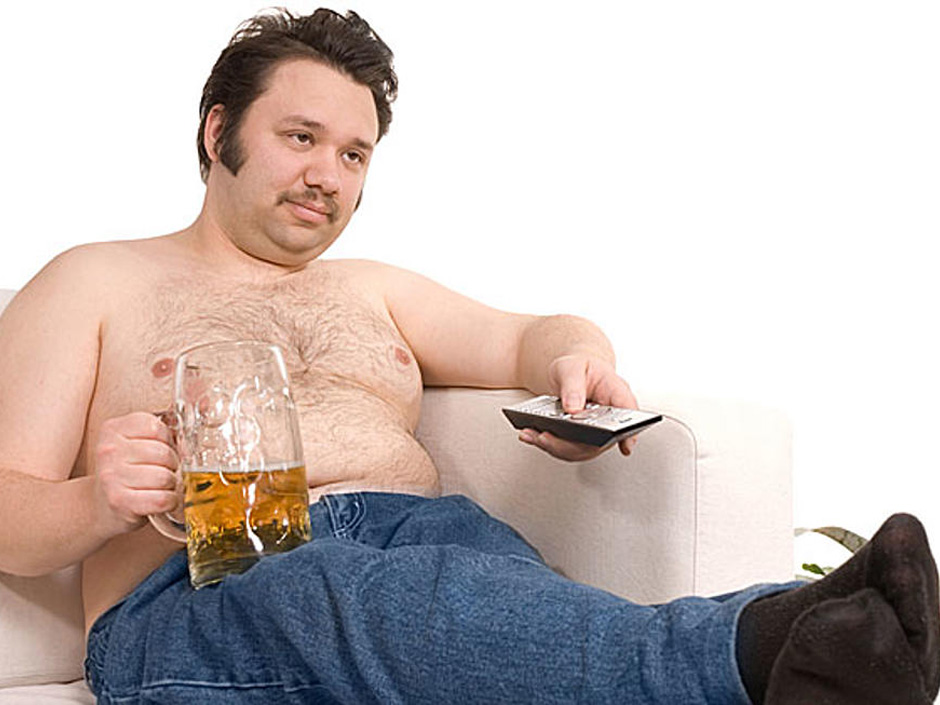 Riding waves, one of our regulars in the comment section asks about my take on sugar and lumber and suggests that there are great trends unfolding which may be a lot more fun and profitable than wasting our time chasing the swings in equities right now. Spot on my intrepid steel rat!

And he’s absolutely right which one of the reasons I love the futures market in general. However retail traders in particular will face a number of problems with trading the softs, grains, and meats:

One – the majority of these contracts are horribly illiquid and comparing the daily volume with that in the index futures and even the metals (which are small contracts by comparison) is rather sobering. Don’t take my word for it, let’s head over to barchart.com and compare some of the futures sectors:

Okay, let’s look at the volume column – the most liquid contract here not surprisingly is March sugar #11 with nary 6,000 contracts traded.

Here are the grains – once again the most liquid contracts in this sector are Soybean, Soybean Oil, and Corn (all of which I post about regularly for this reason).

And here are the metals which show high standard deviation from one contract volume to the next. But look at the three kings which are Gold, Silver, and Copper: Gold shows current volume of > 62,000 contracts, followed by copper with 18,000 and then silver with 17,000. Quite a bit more activity than in the grains or softs.

So when you compare the average daily volume in the grains and soft with that of indices or metals then it’s clear that getting a fill in these two sectors is a lot more adventurous. Which greatly affects of course the spreads which often can widen to the point that you could drive a ice cream truck through them.

I went through that realization many years ago when I was back testing a new trend system on wheat which showed excellent potential on paper. Only to realize that the damn thing repeatedly wouldn’t fill me, especially when the tape was about to resolve in my favor post entry. And of course the cost of trading in live conditions was eating up a lot of my profits.

However all that said, the main problem with these futures contracts for retail traders is that they are unable to actually trade them. Capitalization is one issue as margin requirements are usually quite stringent and exceed the ability of small account holders to employ proper position sizing.

Assuming of course these contracts are even offered by major brokers. ThinkOrSwim/TDA for example has removed many of the softs in recent years, at least I’m not able to find them there under the usual symbols.

Another issue is timing. I often complain about crude which is a royal pain in the ass with monthly rollover dates. Which fortunately is the exception but the main issue is more historical as many of the smaller exotic contracts differ and unless you constantly check them it’s easy to get confused and hold a position beyond the optimal time to exit and re-enter.

This was actually one of the main reasons why I put together a rollover indicator (the lines) for NinjaTrader as at least NT7 was not showing them to me. Fortunately most platforms now have that functionality built-in so it’s easier to keep track. 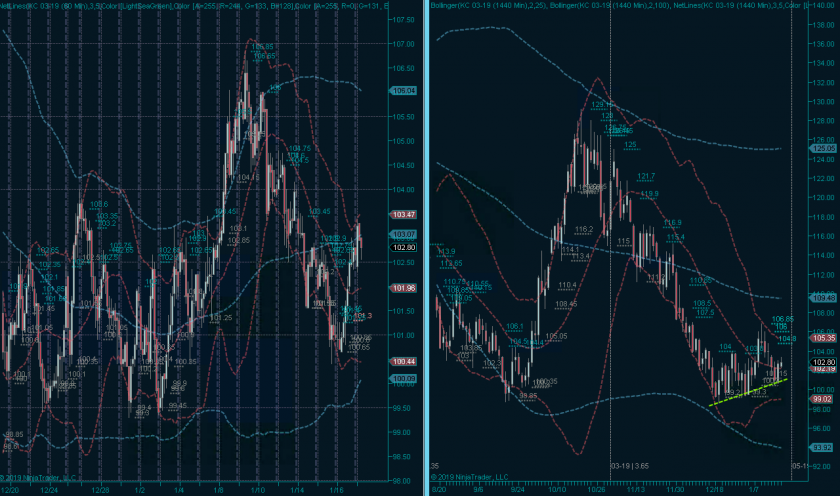 However when it comes to actually trade the futures this is another challenge to consider when opening a position. For example coffee shown above is looking very promising as it has just gone through a consolidation periods which is showing is a series of higher highs and higher lows.

A long entry near here with a stop < the first SL is not a bad idea BUT there is no way I’m going to do this here and then roll into May (yes May – not June – see what I mean?). Of course I could grab May right now but things often get quite wild around rollover time and I have learned the hard way to not grab any positions seven or fewer sessions ahead of time. 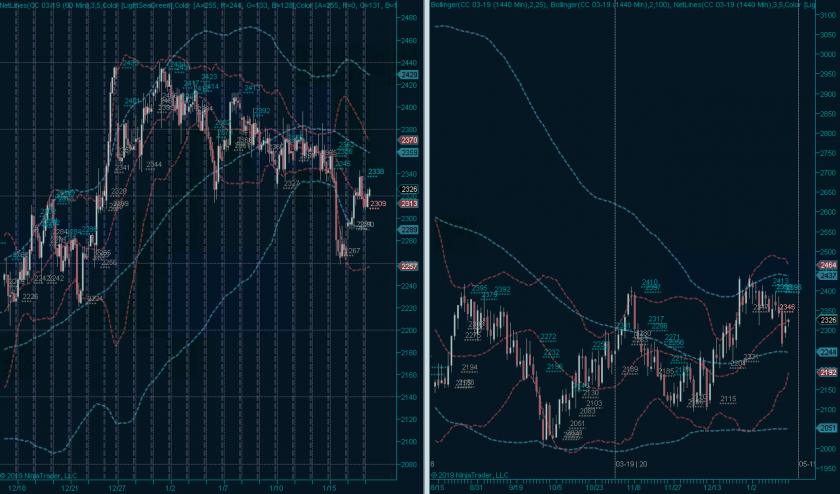 Similar situation in March Cocoa which shows us a rather delectable medium term formation on the daily panel. I would love to take an entry here but once again we are nearing the rollover date. So I’ll have to wait in anticipation that it won’t take off beforehand. 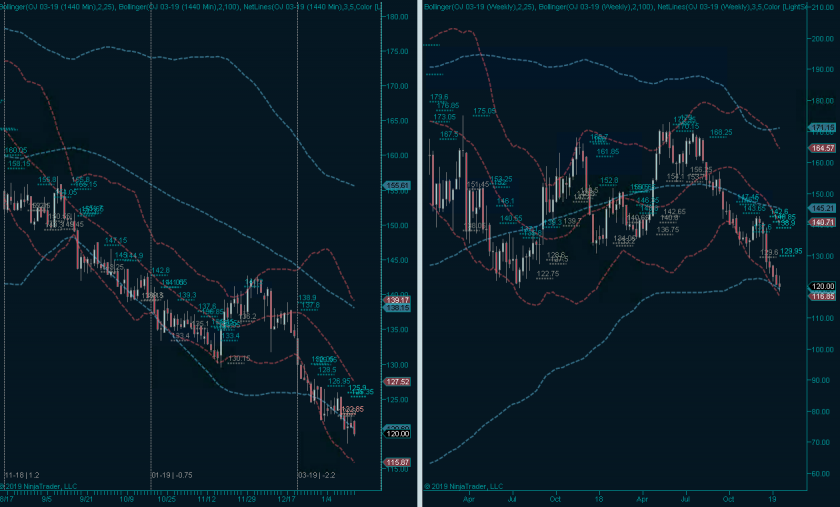 Orange Juice is TINY contract in the softs and the only way to get filled is to have the patience of a Saint combined with hand written commendation by the pope himself. Can pay off handsomely however as it knows how to trend once it gets going. Looks to me it’s about to go into downside trending mode and this is the sort of setup guys like Ed Seykota or Bill Eckhard live for.

What’s difficult to deal with as well is the realized volatility exhibited by such small contracts. This is particularly apparent here in cocoa which has quickly transformed from a high volatility sideways market to a low volume down trending market.

The latter of which actually being quite rare and you don’t really find them in equities or the forex market. They are fun to ride should you be lucky enough to catch them.

So these are just some among many issues when it comes to trading exotic futures contracts. I for one love them but they are an acquired taste and are almost impossible to handle for traders with accounts < $100,000.