Hell Week Is Upon Us 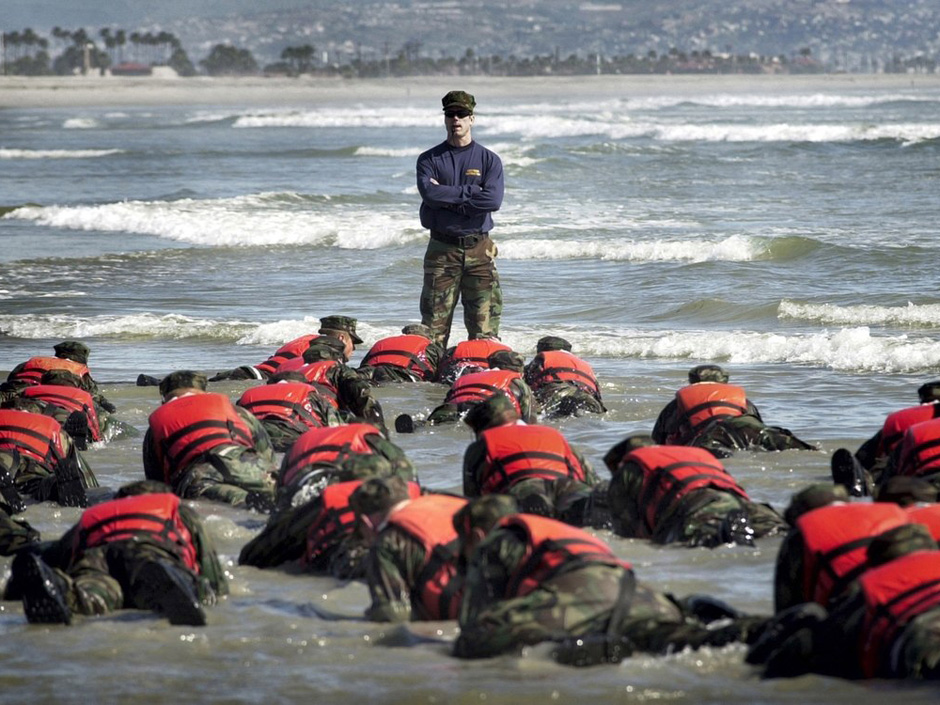 Okay, I’m not going to sugar coat it folks. This most likely is going to be a pretty rough week for anything equities related. Over the past few posts I have been repeatedly highlighting the fact that this year’s Santa Rally thus far has been a complete dud, and given that today marks the first session in the second most bearish week of the year isn’t exactly working in the bull’s favor. 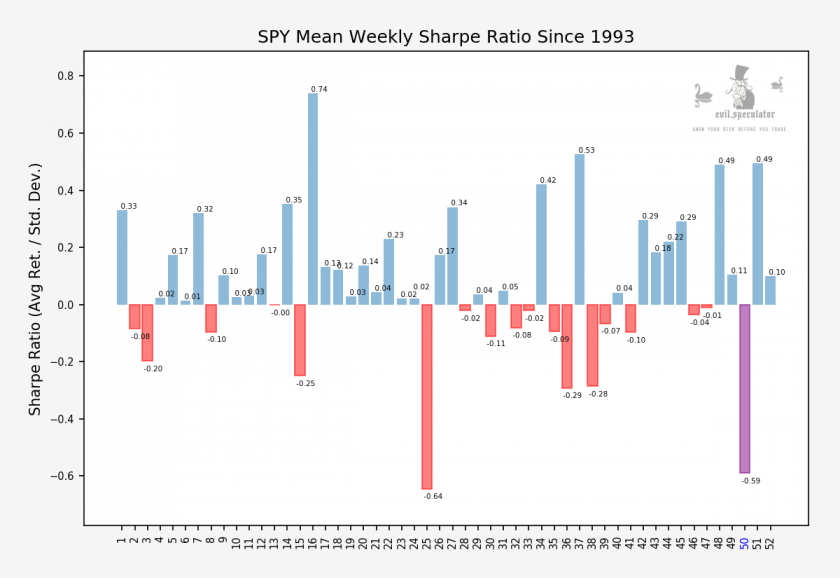 Of course very little has played out according to historical precedent this year so perhaps, just perhaps, week #50 will end up marking a major bullish turning point. Admittedly anything and everything is possible in the current state of affairs.

Politically speaking both the European Union and the United States have turned into a complete clusterfuck over the past year or so and it has mainly been (perceived) economic growth on both sides of the Atlantic that has kept things from becoming completely unglued. With that apparently flipping back into a recessionary cycle  and the Fed flip flopping on its future course of action it’s anyone’s guess as to what happens next here.

But you know what? I say let’s bring it on, let’s burn it all down. I’m frankly sick of turning on the news and seeing nothing but out of touch vapid bubbleheads running their mouths about shit they have absolutely no clue about, has no real meaning to boot, or little bearing on anything relevant to our respective lives. The daily and constant drama only fueled by the endless flood of eye ball grabbing clickbait has been the proverbial sandpaper chafing my ass for quite some time now.

So if a market crash needs to happen in order to trigger a collective mental reset, then I say let’s bring it on. It’ll be a lot of pain for a lot of people over the course of a year or two, but then we may finally be able to get back to living our lives in peace and to conducting our bloody business again. There is nothing like an economic depression to refocus the mind on life’s existential priorities.

And quite frankly I very much doubt that I am the only one who’s feeling this way. Life as a virtual adrenalin junkie may be exciting for a little while, but it seems that this is increasingly becoming our shared reality. Enough is enough, and this has to end. And if the past four weeks in Paris are any indicator, it most likely will one way or the other. 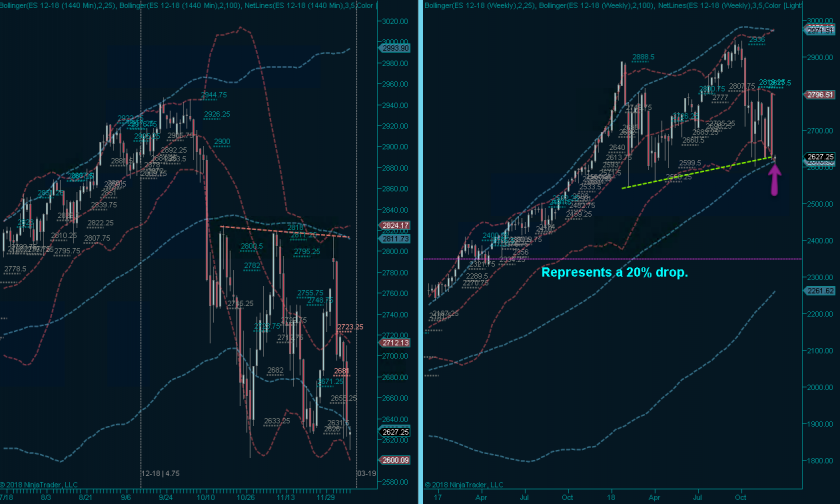 Anyway, let me climb down my soap box so we can look at some charts. The E-mini is now scraping its 100-week SMA and that’s pretty much where all the fun and games stop and equity holders are flipping into survival mode. A slip lower from here may quickly trigger the express elevator to the 2300 mark or even lower.

Yes, a lottery long ticket is on the table but I wanted to assess what’s happening on the Zero first this morning and perhaps going into tomorrow. If I decide to grab one I’ll let you know right away. 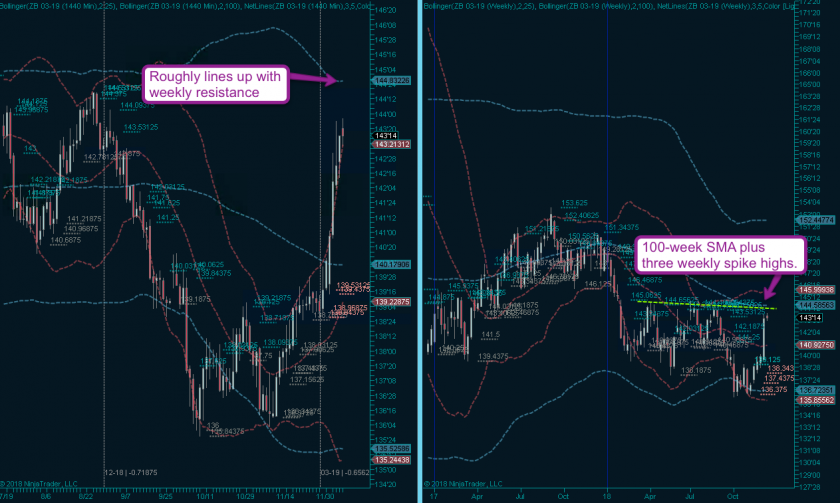 A few more medium term charts. Here’s the bond futures contract which has been running strong since its rollover into March. If you didn’t catch this run don’t beat yourself up as it was a tough one as really nothing was pointing higher at the time.

However the resistance zone near 144’24 is of main interest to me now and in particular what will happen there once we arrive. It’s a possible reversal trade should equities find a magic buyer. Not the first time that would happen, would it? 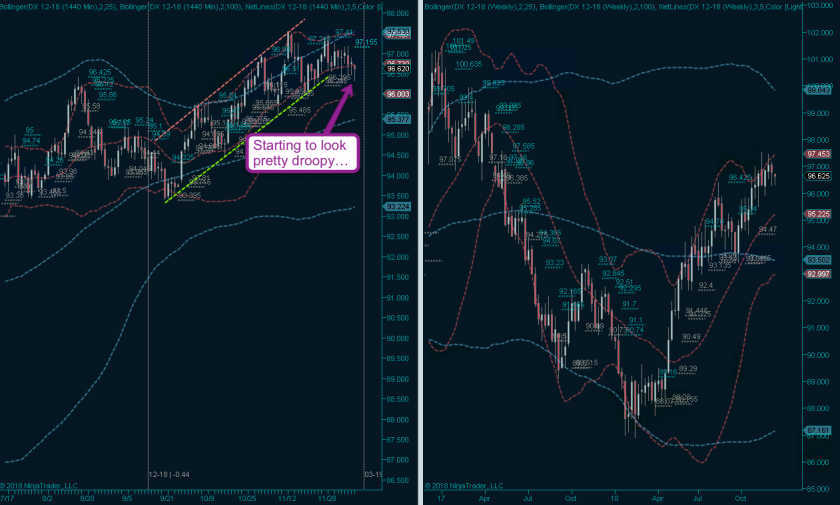 The dollar is starting to look pretty droopy on the daily panel and if it drops through the 96 mark we’ll most likely see it touch 95.5 in short order. Until then it’s a possible dip buy but once again with a stop < the current spike low near 96.3.

Two promising looking setups below the fold for my intrepid subs: